Accessibility links
U.S. Prods Europe On NATO Spending Robert Gates, in his final speech to NATO as defense secretary, lashed out recently at NATO members for having grown reliant on U.S. military capabilities instead of increasing their own defense budgets. But experts say there isn't much political will in Europe to increase defense spending for the alliance. 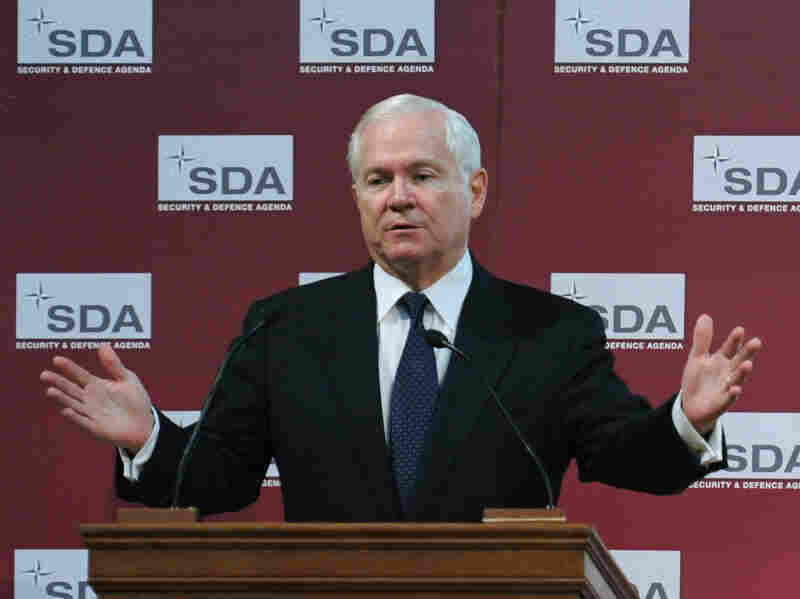 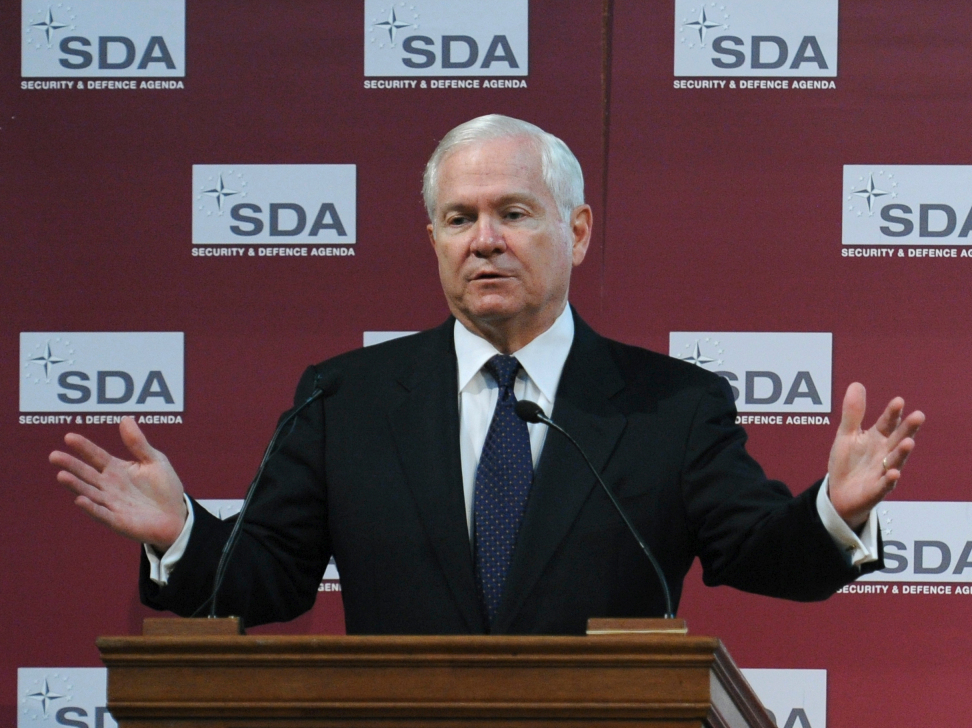 One of the calculations in President Obama's decision Wednesday on U.S. troops in Afghanistan is the growing concern about the cost of military operations — not only in that country, but in other areas as well.

Funding for NATO is coming under the microscope amid growing complaints about the U.S. paying a disproportionate share to the alliance.

When NATO was formed at the end of the 1940s, its mission was clear-cut: a collective defense by European and American allies against the threat of the Soviet Union. As NATO's first secretary general, Gen. Lord Ismay, pithily summed it up the alliance was to keep the Russians out, the Americans in and the Germans down.

NATO's mission may have shifted after the end of the Cold War, but one thing has remained constant: The U.S. is shouldering the military and financial burden of the alliance. Earlier this month, Robert Gates, in his final speech to NATO as defense secretary, said the U.S. could at one time justify contributing up to 50 percent of NATO's budget.

"But some two decades after the collapse of the Berlin Wall, the U.S. share of NATO defense spending has now risen to more than 75 percent — at a time when politically painful budget and benefit cuts are being considered at home," he said.

The View From Europe

If you ask European experts about NATO, they're likely to say U.S. Defense Secretary Robert Gates is right. Europe is obviously not shouldering its share.

"Mr. Gates was citing reality. The Americans are getting fed up with carrying the defense and security burden for the rest of the western world," says Chris Bellamy, a London-based expert on defense and global security.

The U.S. has grumbled about this issue since the Cold War days. Now, though, there's a new factor.

Listen To The Story From NPR's Philip Reeves

Europeans Concur: Not Pulling Our Weight In NATO

Gates said the U.S. is embroiled in two wars — Iraq and Afghanistan — and an economic crisis. He lashed out at NATO members for having grown reliant on American military capabilities instead of increasing their own defense budgets. Gates warned that the U.S. Congress and the American people were growing tired of picking up most of the tab.

Heather Conley, director of the Europe program at the Center for Strategic and International Studies, says there was a clear warning behind Gates' blunt talk.

"If our European partners are unwilling to take a step forward [and] increase their defense spending, they cannot assume that the U.S. will remain," she said. "Its spending, its capabilities in Europe may have to be reduced in light of other budgetary restrictions."

But Conley says Gates' message fell on deaf ears. She says there's not much political will in Europe to increase defense spending for NATO.

Sean Kay, a professor of politics and government at Ohio Wesleyan University, has worked on NATO issues — inside and outside of government — for 30 years. He says there's little motivation for European nations to take on a greater role. Kay says it's a "pretty good deal" for the Europeans.

If they can get away with spending very little on defense and getting the benefits of the American commitment, and we're willing to sustain that, then, you know, it's just as much a challenge for us to look at ourselves and ask, well, what are we going to do to change that calculus?"

"If they can get away with spending very little on defense and getting the benefits of the American commitment, and we're willing to sustain that, then, you know, it's just as much a challenge for us to look at ourselves and ask, well, what are we going to do to change that calculus?" Kay said.

Kay says the U.S. does get something out of the alliance: validation of U.S. foreign policy objectives, and legitimacy for military operations like the one in Afghanistan.

Gates has criticized NATO for not living up to its commitments in Afghanistan and for placing too many restrictions on the troops it sends there.

But Robert Hunter, a former U.S. ambassador to NATO, says many in the alliance see Afghanistan as an American mission, rather than a NATO one. He says the allies are much more reluctant to get involved in Afghanistan because they don't see themselves as directly affected by events there the way the U.S. does with regards to terrorism.

"As a result, I wouldn't say they were doing us a favor, but they did it in order to please the United States rather than if they didn't do it, they would suffer some direct consequences of security," he said.

The military operation in Libya is being led by NATO, but relying heavily on the U.S. for intelligence, munitions and surveillance aircraft. Kay says European partners should be able to manage security concerns in their own backyard.

Kay says the U.S. needs to have a fundamental rethink about its relationship with NATO allies.

"The real value of the American-European relationship today is in the trans-Atlantic economic relationship and the real threats and challenges to that are economic, not military," he says.

So, he says, the NATO basis for that is not as crucial or even as important. Still, Kay says nothing should happen precipitously, or in a burst of isolationism.