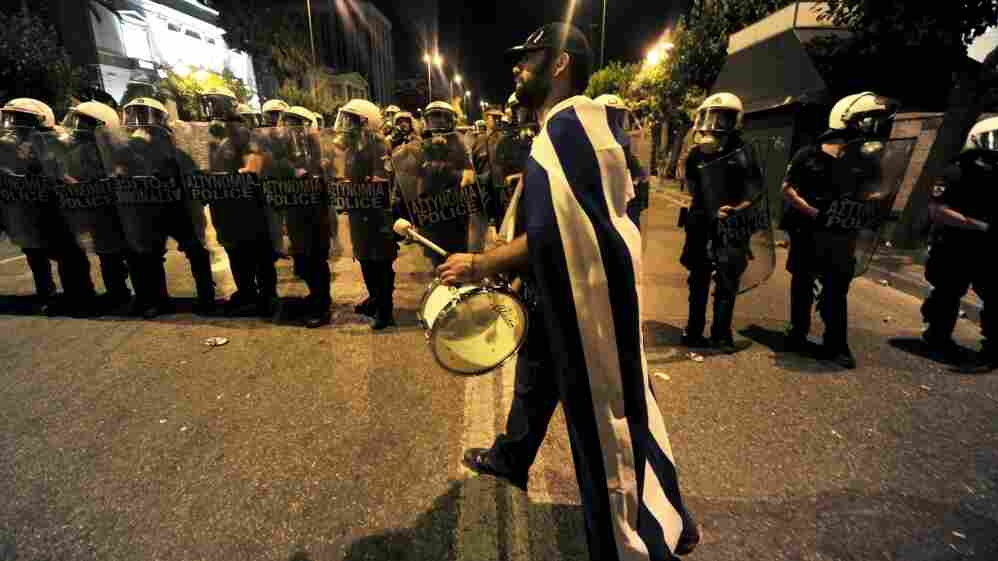 A demonstrator plays drum in front of riot police outside the Greek Parliament in Athens. The protesters aren't the usual leftists and trade unionists with red banners. They're mostly middle-class Greeks waving the white and blue national flag. Aris Messinis/AFP/Getty Images hide caption 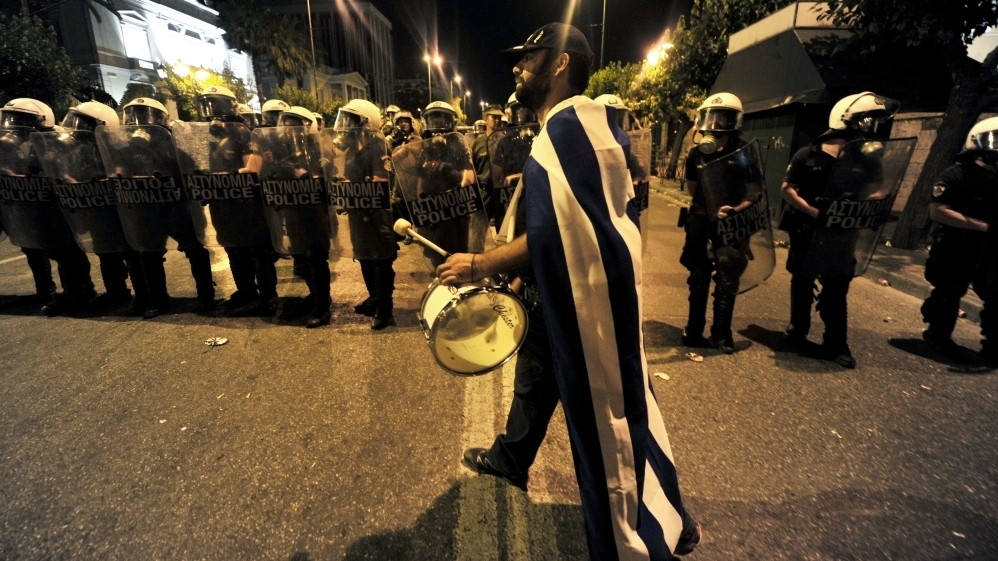 A demonstrator plays drum in front of riot police outside the Greek Parliament in Athens. The protesters aren't the usual leftists and trade unionists with red banners. They're mostly middle-class Greeks waving the white and blue national flag.

Greece's embattled prime minister survived a vote of confidence in Parliament early Wednesday. Next week, he faces an even tougher vote for further painful austerity measures to secure a fresh bailout from international lenders.

But the government has lost the people's confidence as tens of thousands of Greeks continue daily protests against devastating measures that have led to growing joblessness, homelessness and anxiety.

The demonstrators are not the usual leftists and trade unionists with red banners. They're mostly middle-class Greeks waving the white and blue national flag.

In Athens' central Syntagma Square, actors perform in the style of an ancient tragedy. Wearing farm-animal masks, the Greek chorus chants the Orwellian phrase: "All animals are equal, but some are more equal than others." The crowd of demonstrators applauded.

These Greeks are outraged by what they see as the injustice of draconian austerity measures that have driven unemployment to a record high 16 percent, and extended the recession into its third year.

Child psychiatrist Efi Bourla has protested in the streets against sharp cutbacks in public health. She says in her practice she has noticed a large increase in eating and sleeping disorders. Her young patients describe a recurrent nightmare about a big scary bear they all see in a TV cartoon.

They "constantly live with a big frightening bear that is always behind us, [and who says,] 'Now I'm going to eat you, now I am going to take your job, no money,' " Bourla says.

She adds that children's growing anxieties reflect those of their parents who are burdened with mortgages and credit card debt. They hear their parents grappling with mysterious new words learned from TV. For example: bond spreads, haircuts and credit default swaps.

Children are beginning to fantasize, Bourla says, that the bank is going to take away their home and even their toys. She says she sees more children who refuse to go to school and insist on staying home to take care of their newly unemployed and depressed fathers.

At Klimaka, a nongovernmental organization that runs a shelter for the homeless, a group of people sits in a quiet courtyard under a pergola.

Until recently, the shelter was mostly for immigrants. But the economic crisis has created a new homeless generation, in which ordinary, well-educated Greeks have suddenly lost their steady incomes and their homes.

Taxiarhis, who declined to give his last name, is 49 years old. He used to own a small coffee shop, but when he couldn't pay back the mortgage, the bank took away everything he owned. He is humiliated his life has so rapidly deteriorated.

"People don't need more than a job to find themselves, to feel again they are not rubbish," he says. "They need just a job and some money to live in a house, to live like I was living before like normal human beings."

Not far away from the shelter is the office of a 24-hour suicide hotline. In the past 18 months, calls have increased by 250 percent.

"It's not just an economic crisis; it is an emotional crisis; it is a crisis of values right now," says Aris Violatzis, a psychiatrist and volunteer.

He describes the kind of person who calls in: a family man, who always lived by the book and who is suddenly told, 'You did everything wrong.' "

And Violatzis says there's the added shock of the revival of old prejudices — being seen by Northern Europeans as lazy and living off of the work of others.

"Our identity is at stake because suddenly being a Greek is associated with something bad," he says.

The turmoil in Greece has been seen primarily in economic terms and in its repercussions on the single European currency.

But it's now also emerging that the harsh austerity measures imposed by Greece's international lenders could be undermining the sense of European partnership and tearing apart the country's social fabric.