Accessibility links
As Rivals Unveil Hybrids, Toyota Boosts Prius The Prius is no longer the only "green" vehicle. Ford, Honda and GM all sell hybrids, too. Toyota's response: It's making Prius its own brand and rolling out new models, including the Prius v. The carmaker says the model could boost overall Prius sales by another 15-20 percent. 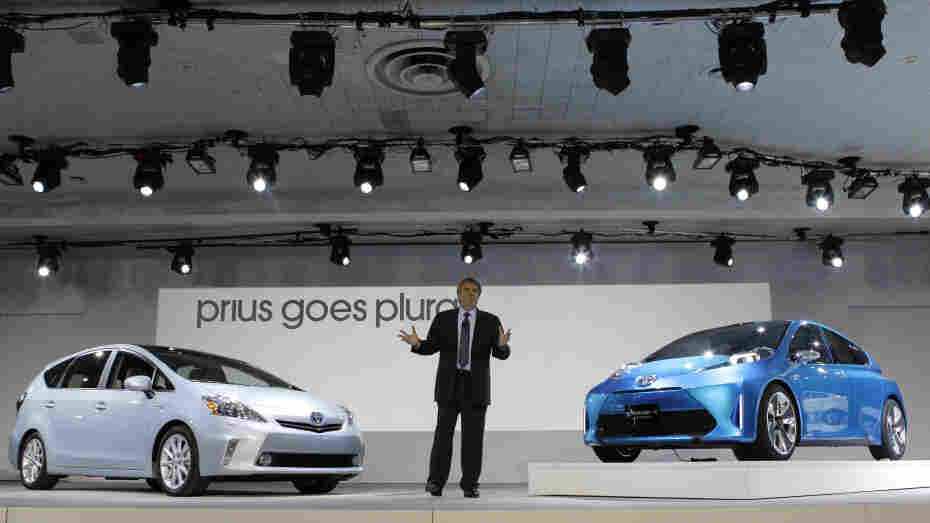 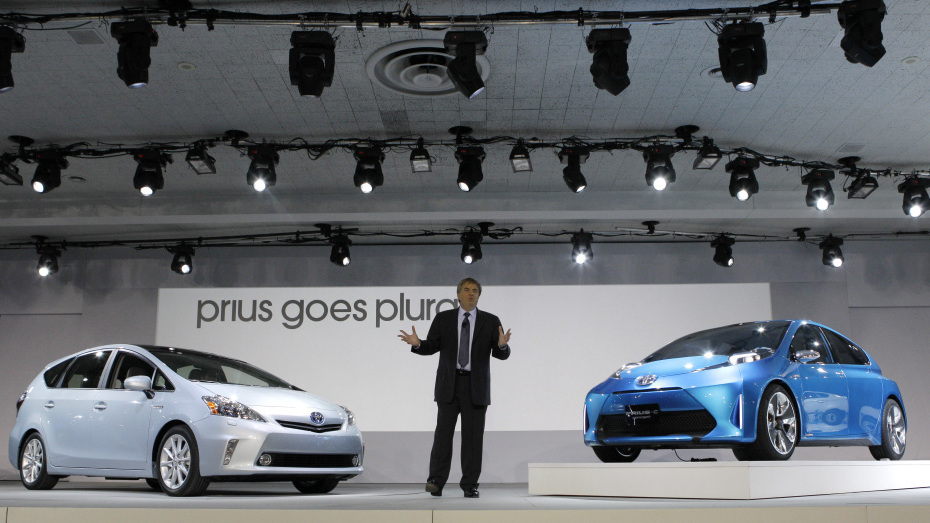 The Prius, Toyota's flagship green vehicle, is facing some stiff competition from other automakers launching their own hybrids, so Toyota is responding by making the Prius its own brand.

Lauren Squires, a resident of Ann Arbor, Mich., has heard all the stereotypes about Prius owners, and she's not a bit defensive about it.

"I don't own Birkenstocks anymore," she says, though she used to. "I do make my own granola."

Squires bought her Prius in 2007, a year Toyota sold more than 181,000 Priuses in the U.S. Car sales of all kinds have dropped since then, but Toyota is still the undisputed king of the hybrid.

In fact, the Prius accounts for more than half of all the hybrid cars sold in the U.S. Squires says her Prius suits her lifestyle just fine — most of the time.

"The only thing ... sometimes I'm lacking on space," she says. "I can't fit my bike inside, which I could fit inside some vehicles."

More space: That's what Americans always seem to crave in their cars.

Toyota's Kirk Forscht says the five-passenger Prius v will appeal to people who have always wanted a Prius, but figured it was just too small.

"They've got two kids, a dog, and all the things that come with that, all the strollers and baggage and bags, and it's a little tight. So the Prius v gives them the option with all this extra cargo space to be able to get all the things they need and still drive a green vehicle," he says.

But the Prius is no longer the only "green" vehicle. Ford, Honda and GM all sell hybrids, too. So far, Prius has been to hybrid as Kleenex is to tissue, or Levi's is to jeans. That kind of customer recognition sells cars and elevates a company's image. Toyota's Ed LaRocque says the Prius v could boost overall Prius sales by another 15-20 percent.

"Ninety-seven percent of all Prius that we've sold since we launched in 2000 are still on the road today," he says. "That tells us they're reliable, customers have accepted them, and we think the future's bright for all hybrids."

But hybrids cost more and demand has always been closely linked to gas prices. LaRocque acknowledges as much, but says even in the short run he's not worried.

"You know we don't expect gas prices will go down below $3.50 a gallon anytime soon," he says.

Expanding Prius is also part of Toyota's plan for stricter CAFE standards, which dictate the number of miles per gallon that an automaker should get for the range of vehicles it sells. It will be difficult for car companies to meet those mandates without selling more hybrid cars.

LaRocque says the Prius has made Americans comfortable with hybrids, but Bill Visnick, an analyst with Edmunds Auto Observer, isn't so sure.

"I'm surprised at how many people still think hybrid cars need to get plugged in," he says. "It's really quite surprising to me after 11 years in the market how many people don't understand how hybrids work."

Visnick says there's another problem with the Prius — as popular as it has been.

"The fact is that it's very much known as a weeny sort of a car, and sort of a car for people who are driving too slow in the fast lane," he says.

Visnick says the first company that figures out how to make a hybrid car sexy and cool will gain a competitive edge. So far that hasn't been Toyota. But he says Prius is still the standard bearer; it's always going to represent the bar.

Toyota's supplier problems will slightly delay the launch of the Prius v. It's now due in the U.S. in late fall. Toyota will add two other members to the Prius brand next year. To add to the confusion, one of them will be the kind of hybrid you have to plug in.