Accessibility links
Movie Review - 'Bad Teacher' - Class Is Dismissed: 'Bad Teacher' Is Crude, But Fun How bad is this teacher? Director Jake Kasdan stuffs ineptness and inappropriateness into the lesson plan in equal measure. But critic David Edelstein says that the film's moral turpitude is also the source of its charm. 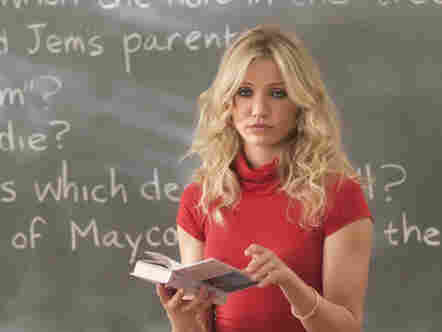 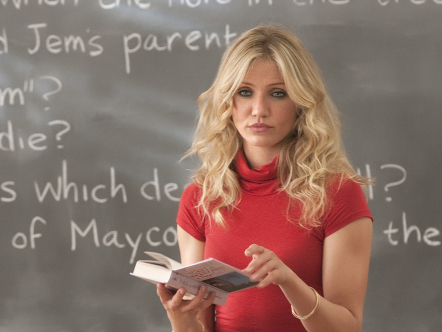 Bad Teacher is a raunchy comedy about a conniving alcoholic druggie middle-school teacher played by Cameron Diaz who'll do anything to get the money to buy herself some bigger breasts so she can marry rich and not have to do the job at which she's, yes, bad. How bad is she?

Rated R for sexual content, nudity, language and some drug use

So, the movie is one broad joke on the theme of how-bad-is-she repeated over and over, and most of the early reviews have complained about its coarseness and vulgarity. My response is easily stated: Get off your high horses. Bad Teacher made me laugh harder than anything this year outside Broadway's The Book of Mormon, which is filthier and still won the Tony.

As Elizabeth Halsey, Cameron Diaz does not walk when she can sashay, and almost always in short, tight dresses and stiletto heels. She looks, frankly, used — dissipated, hungover, her make-up smeared, her wide mouth looking unusually lewd. She's wonderful — but then, she's often wonderful, despite recent high-profile embarrassments like Knight and Day opposite Tom Cruise mugging it up and trying too hard to be funny. Diaz doesn't need to mug. Her great big features are gorgeous and clown-like at once.

As Bad Teacher opens, Elizabeth is departing John Adams Middle School, where she has been teaching for a year without even learning the names of her students — a matter of crushing indifference to her given her coming marriage to a rich boy. Alas, he dumps her — or, rather, his mother insists he dump her for racking up staggering monthly credit card bills. So it's back to bad teaching.

On her return to the school in the fall, Elizabeth comes face to face with her opposite number played by the brilliant British actress Lucy Punch, often a sexpot in movies but here the soul of primness. To save face, Elizabeth concocts an elaborate story about catching her fiance in bed with another man — a lie that evolves the more she tells it. You can imagine. Or maybe not.

What Bad Teacher most reminds me of is old Bill Murray comedies like Stripes or Meatballs, but with a woman talking dirty and using everything in her arsenal to get what she wants — cheating, lying, and being incorrigibly sleazy and opportunistic in the great American degenerate movie huckster tradition. There's a Bill Murray figure here, too, a pudgy pothead gym teacher played by Jason Segel, who watches her with amusement, admiration and unconcealed lust. One thing, though: As taken as he is by her gonzo ways, he doesn't collude in her bad teaching. He thinks she should do something else. Although Elizabeth isn't punished for breaking almost every law there is, ethical and legal, she's not rewarded either. Where she ends up is very satisfying — even touching.

Director Jake Kasdan loves his actors and gives them room to breathe — and, in some cases, hyperventilate. Along with sterling turns by Diaz, Segel, Lucy Punch and Phyllis Smith from The Office as Elizabeth's mousy colleague, Justin Timberlake defies expectations as an insipid little bespectacled nerd with a fortune from his family's watch business — a performance of gentle weirdness that builds to a non-sex sex scene with some of the most inspired nerdy-dirty language I've ever heard.

I've missed gonzo. I don't mean fake gonzo, like the Judd Apatow movies in which child-men act out before they have to grow up, or swill like the Hangover films that reinforce American males' sense of entitlement. Bad Teacher, like Bad Santa, is blessedly free of redeeming social value.