Accessibility links
Shared Madness: Mozart's 'La Finta Giardiniera' He may have written this opera when he was just 18 years old, but Mozart shows us the method inside his characters' doubled madness.

From The Royal Theater La Monnaie In Brussels 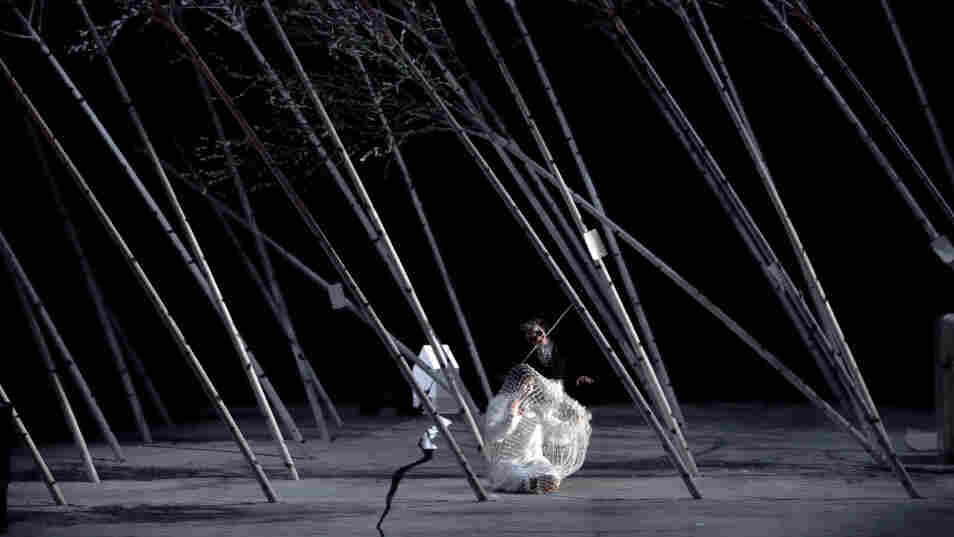 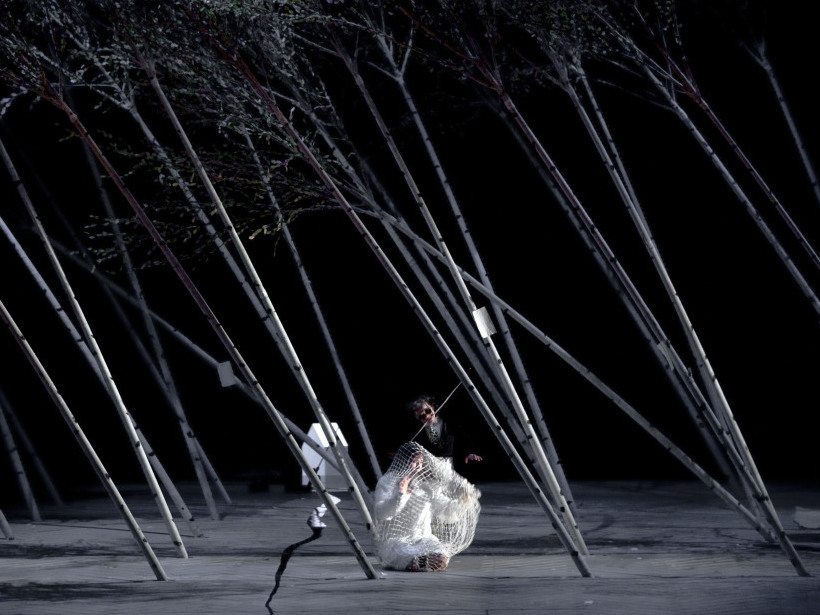 It doesn't take much effort to identify artistic expressions of just about every human emotion imaginable. Love, envy, joy, anger, hope and despair — you can find them all in everything from simple drawings and brief verses to vast canvases, hour-long symphonies and epic poems. But there's one state of mind that music — and especially singing — seems to express more vividly than just about any other from of art: madness.

By the middle of Act One, Violante (soprano Sandrine Piau) is already in turmoil. Her former lover, Belfiore, has nearly killed her, but she now finds herself looking for him, and expresses her loneliness in the aria "Geme la tortorella" — "The turtledove moans." In this performance from Brussels, it fittingly begins with the sound of birds.

In the rock world alone, the examples seem endless — from Pink Floyd's "Brain Damage" to Green Day's "Basket Case" to Nirvana's "Lithium." Adding several dozen more to the list would only be scratching the surface, and the catalog of rock and roll craziness goes back decades.

In the second act Belfiore thinks he has found Violante, but her confusing signals are pushing him over the edge to madness as he sings "Gia divento freddo" — "It's already cold."

Then there's the opera house, where musical insanity dates to the early 1600s, when opera itself was a brand new concept. As things progressed, madness became an operatic specialty, and specific sorts of musical numbers evolved to express it. Generally, "mad scenes" in opera involve a single character — often a woman in love — who goes off the deep end while everyone around her looks on in horror and amazement. The most famous example may be the mad scene from Donizetti's Lucia di Lammermoor, in which an unhappy bride carves up her husband on their wedding night.

Sometimes, though, operatic madness gets a bit more complicated, and there's a great example of that in Mozart's La Finta Giardiniera, an uneasy comedy written when the composer was just 18 years old. The opera centers on a pair of once and future lovers — Violante and Belfiore — who seem unbalanced right from the start; he once tried to stab her, and yet she seems willing to take him back.

Yet, as often happens in Mozart's comic operas, he seems to justify a dubious plotline with a disturbing reminder of the unlikely events that can also go on in our own heads — especially when love is involved. Violante may be crazy to want her violent lover back, but she also seems determined to drive Belfiore nuts as well as part of her price for reconciliation. One result is a unique double mad scene that morphs into one of Mozart's signature ensemble finales — a remarkably complex and effective number for a composer who was still a teenager.

On World of Opera, host Lisa Simeone presents La Finta Giardiniera in a production from the royal theater La Monnaie in Brussels. The stars are soprano Sandrine Piau as the woman who goes over the edge and tenor Jeremy Ovenden as the man who joins her there.

The Story Of 'La Finta Giardiniera'

The opera is in three acts, and has only seven characters — though to begin, one of them has two identities. She's the title character, La Finta Giardiniera, or "The Phony Gardener" — and that's just what she is. As ACT ONE begins, her name is Sandrina, and she's working as a gardener for the mayor of a small town. 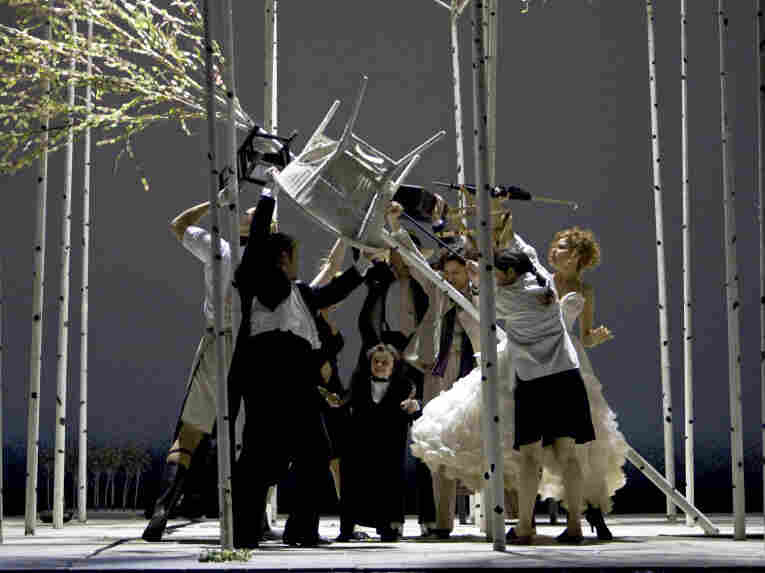 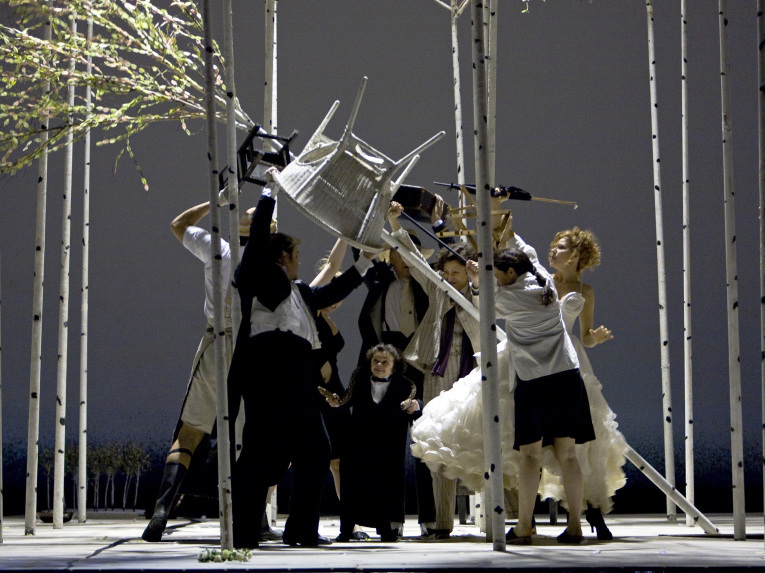 Sandrina's real name is Violante. She's a noblewoman who left home after an ex-lover, Count Belfiore, tried to stab her. The authorities think Belfiore actually killed Violante, so they're hot on his trail — and strange as it might be, she seems determined to find him as well.

The mayor "Sandrina" is working for has a niece named Arminda. She's about to marry a count, but nobody seems sure exactly who this supposed count really is. The local poet Ramiro is unhappy about the engagement, because he's in love with Arminda. Meanwhile, the mayor is falling for Sandrina, and another servant, Serpetta, is being courted by a guy called Nardo, Sandrina's assistant. But he's in disguise, too — he's actually Roberto, Sandrina's personal servant from her days as a noblewoman.

It takes some time to introduce all the characters, and to get the various romances sorted out. Things get even more snarled when Arminda's fiancé, the count, shows up. Naturally, he turns out to be Belfiore, Sandrina's old boyfriend. But when he recognizes her as Violante, she denies her real identity. The act ends in general confusion — but it's plain that despite his engagement to Arminda, Belfiore still carries a torch for his former lover.

At the start of ACT TWO, Sandrina still refuses to acknowledge that she is actually Violante, when a warrant arrives charging Belfiore with Violante's murder. At that, Sandrina admits her identity and saves him from arrest. Naturally, this convinces Belfiore that she still loves him — which is what he's been hoping all along. But then, Sandrina takes it all back, telling him that she really isn't Violante. She just said she was to get him out of a jam. Belfiore is beside himself, and begins to show signs of madness.

Meanwhile, Arminda is becoming annoyed with Sandrina. She still wants to marry Belfiore, and thanks to Sandrina, the man now seems a little bit nuts. So Arminda and Serpetta take the troublesome Sandrina into the forest at night, and ditch her. When Nardo goes off to rescue Sandrina, the other characters follow him.

Before long, they're all bumping into each other in the dark, and Belfiore and Sandrina both seem to be going crazy. The act ends with an ensemble finale and double mad scene, all rolled up into one.

By ACT THREE Sandrina and Belfiore have come to their senses, and realize that they're still in love. This amazes just about everybody: the mayor, whose gardener turns out to be a noblewoman in disguise; Arminda, who was about to marry Belfiore; and both the poet Ramiro and the chambermaid Serpetta, who still don't seem to know quite what's going on. The one person who actually may understand the situation is Roberto, Sandrina's servant — though even he was pretending to be someone else, and now finds himself smitten with Serpetta.

Yet, with Sandrina back to being Violante — and back together with Belfiore — the way is paved for a happy ending. Ramiro has always been in love with Arminda, who now decides that a poet just might make a better lover than a count. Serpetta falls for Roberto, who's probably out of a job anyway, with Violante about to be off with Belfiore. So, when it all shakes out, love has won the day. The only one out in the cold is the Mayor himself, who decides he'd better start looking — for a new gardener.