Accessibility links
Obama: We Need More Manufacturing Jobs The president is in Pittsburgh Friday, talking about how the U.S. needs good manufacturing jobs. He will promote a program to remove roadblocks to small- and medium-sized factories. 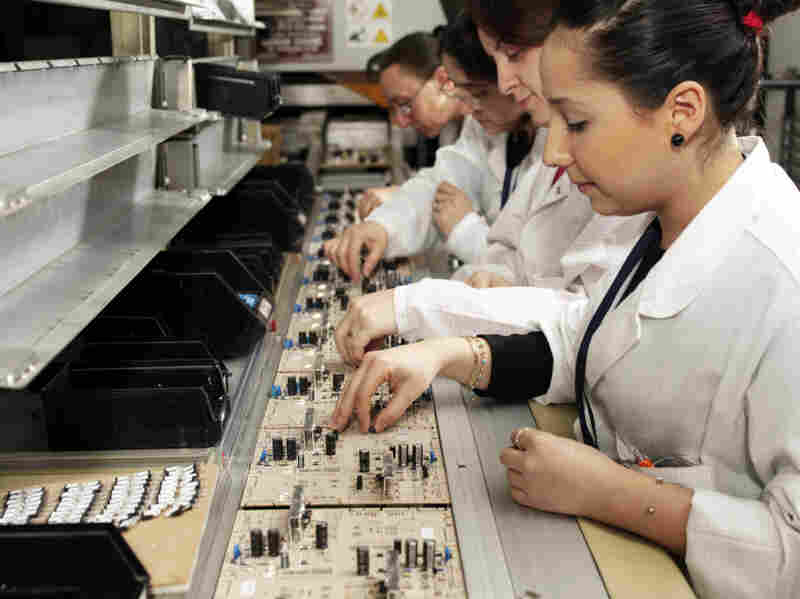 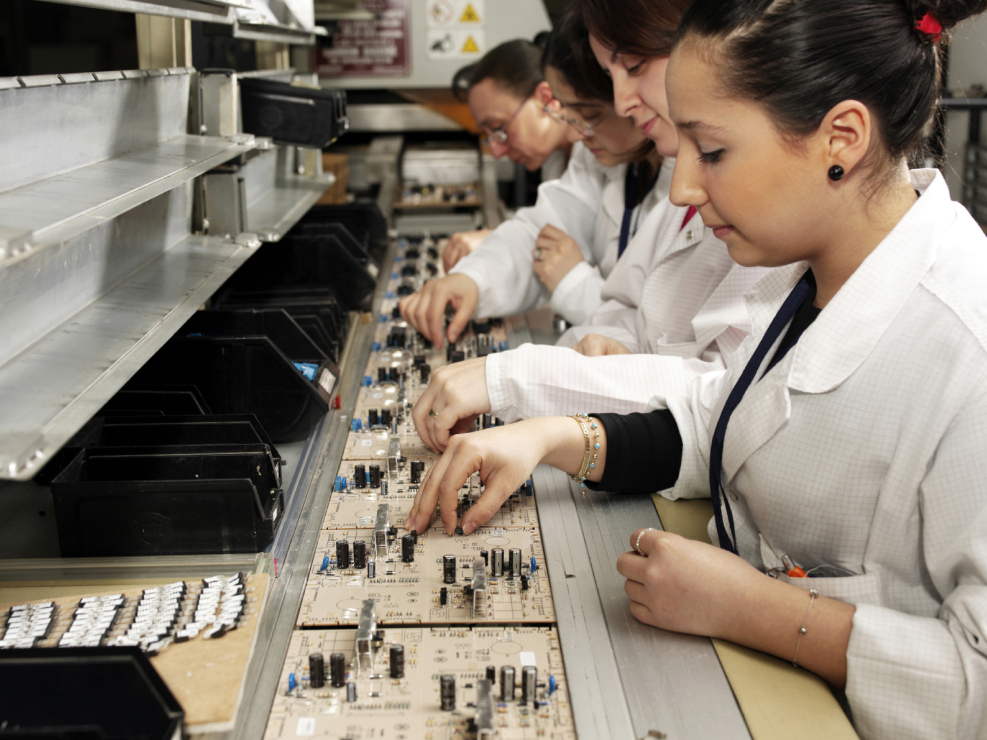 Workers with circuit boards on a production line.

President Obama is in Pittsburgh Friday to highlight American manufacturing, which he hopes to boost with a series of appearances and a program called the Advanced Manufacturing Partnership.

Coming from the industrial Midwest, Obama knows the value of factory jobs. From his first days in office, he's been talking about lighting a fire under the nation's factory boilers.

"One of the changes, and I'm going to be talking about this in the coming weeks, is I'd like to once again see our best and brightest commit themselves to making things," he said at Georgetown University in the spring of 2009.

The president's keen interest in making things is more than just smokestack nostalgia. Economist Jared Bernstein, who until recently led the administration's Middle Class Task Force, notes that pay and benefits in factory jobs average 20 percent higher than those in the service sector.

"There's no question in my mind," Bernstein says, "that a stronger manufacturing sector with more employment opportunities is really important for loosening the middle class squeeze and providing people with better access to better jobs."

Manufacturers are bouncing back from the recession. Over the last year and a half, factories have recovered nearly 240,000 jobs, making the sector one of the brighter spots in the still-sluggish recovery. But over the longer term, manufacturing's role in the economy has shrunk, from one in four jobs in 1970 to less than one in 10 today.

No one expects to reverse those trends entirely. But Bernstein, who's now with the Center on Budget and Policy Priorities, says the U.S. can support more factory jobs with a little government encouragement.

"The government can help plant important seeds to help grow the industry," Bernstein says. "If you think back to railroads or transistors or the Internet, the government has always played a role in early innovation."

If you think back to railroads or transistors or the Internet, the government has always played a role in early innovation.

That's the goal of the Advanced Manufacturing Partnership that Obama is announcing Friday. Along with businesses such as Dow Chemical and Proctor & Gamble, and Carnegie Mellon and other universities, the government hopes to identify opportunities and remove roadblocks to help small- and mid-sized factories grow.

The administration wants to channel some $500 million into the effort, with most of that money coming from existing government programs. White House technology adviser Eric Lander insists the administration is not getting into the business of picking winners and losers.

"We are not endorsing industrial policy. What this is all about is creating the ecosystem in which private entrepreneurs, private innovators, can flourish," Lander says. "That kind of ecosystem, though, does need some public support."

Obama will continue his push for advanced manufacturing next week when he visits an Alcoa plant in Davenport, Iowa. The plant supplies aluminum to both Boeing and Airbus. Spokesman Michael Belwood says the 123-year-old company has been developing new alloys to make planes lighter, more durable and more fuel-efficient.

"The company is built on the ability to make aluminum and aluminum products better than anyone else, and Davenport is a great example of how we do that," Belwood says.

Innovation has been good for business. The Davenport plant now employs some 2,000 people, which is more than it had before the recession. Alcoa expects to hire about 80 more within the coming months.