Accessibility links
Will Reporter Be Deported? Signs Point To 'No' Although U.S. Immigration and Customs Enforcement declined to comment directly on the case of Jose Antonio Vargas, the agency's recent actions indicate the Pulitzer Prize-winner and illegal immigrant is probably safe. 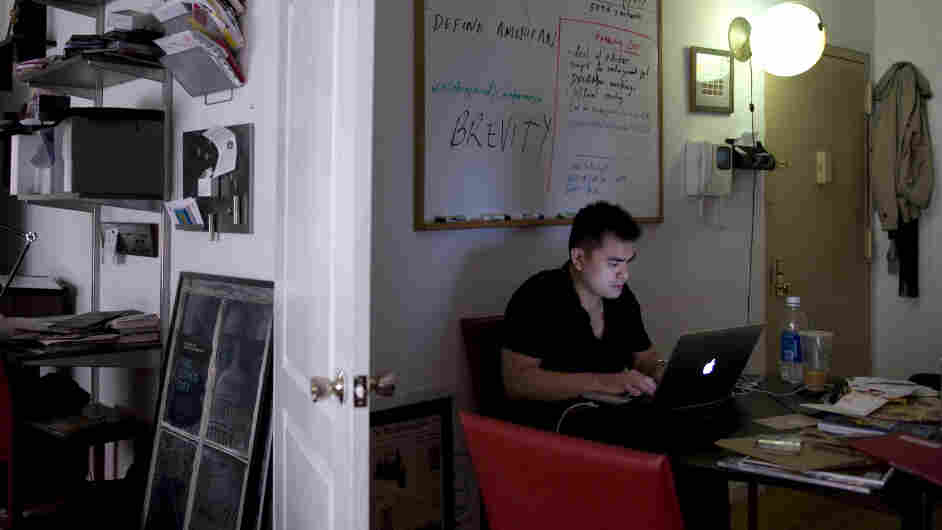 Jose Antonio Vargas works in his New York City apartment May 26. Vargas, a journalist, has revealed to the public that he is an illegal immigrant. Bonnie Jo Mount/Courtesy of The Washington Post hide caption

Now that a high-profile journalist has admitted to being an illegal immigrant, can he expect a visit from the authorities? Based on recent immigration policy directives, the likely answer is "no."

As he explains in a New York Times Magazine article and an ABC News interview, journalist Jose Antonio Vargas broke numerous laws to conceal his citizenship status for more than a decade. A spokeswoman for U.S. Immigration and Customs Enforcement declined to directly address whether the agency might take action against Vargas.

"ICE takes enforcement action on a case-by-case basis — prioritizing those who present the most significant threats to public safety as determined by their criminal history and taking into consideration the specific facts of each case, including immigration history," spokeswoman Cori W. Bassett said in an emailed statement.

But the agency's recent issuance of certain directives might provide the clearer answer — which is that Vargas probably is safe.

In memorandums issued by ICE Director John Morton, the agency clarified that its priorities are to focus on illegal immigrants who present "a clear risk to national security."

In one of the memos, released June 17, Morton said ICE is focused on felons and repeat offenders, gang members, and those with numerous immigration violations such as illegally re-entering the U.S. and committing fraud.

The memo also directs ICE officials to avoid proceedings against a wide array of individuals, including U.S. military veterans, minors and seniors, pregnant women, those who grew up in the U.S. and "long-time lawful permanent residents."

In general, Morton has granted ICE officials, down to agents on the street, the leeway to make their own judgments about whether to prosecute unlawful residents. This move, by itself, could signal a significant shift in U.S. policy, according to some immigration attorneys.

"I suspect that Jose Vargas had zero options other than this," says Chicago attorney Carlina Tapia-Ruano, who specializes in immigration cases. Tapia-Ruano also is on the board of the American Immigration Lawyers Association, a nonprofit group.

"He was without a visa. He has no close family members here, like parents. With our current laws, he would need to leave the United States, go back to the Philippines and wait 10 years before he can come back and apply for a visa.

This could potentially be a huge change for immigration policy.

Carlina Tapia-Ruano, a Chicago attorney who specializes in immigration cases

"Now, there is an actual opportunity to make a request with the deportation officer that, prior to this memo, didn't exist. ... This could potentially be a huge change for immigration policy," Tapia-Ruano said.

Tapia-Ruano acknowledges that the discretion also can be used by ICE agents to impose harsh penalties on individuals. And other activists who advocate on immigrants' behalf, such as the National Day Laborer Organizing Network, have criticized Morton's guidelines as a rebranding of powers that ICE officials already had, such as shielding crime victims from deportation proceedings.

Vargas' decision comes at a time in which many undocumented immigrants are taking greater precautions to avoid discovery, in response to state crackdowns and similar attempts by Republicans in Congress. In the absence of federal immigration reform, several states have taken action to tighten enforcement of existing immigration laws.

The 30-year-old Vargas, part of a team that won a Pulitzer Prize in 2008 for The Washington Post, revealed that he deceived his employers by obtaining documents under false pretenses. Those included a falsified Social Security card and an Oregon driver's license obtained by using other falsified documents. The latter once gained him entry to the White House to report on a state dinner.

"On the surface, I've created a good life. I've lived the American dream," Vargas writes in the Times. "But I am still an undocumented immigrant. ... It means going about my day in fear of being found out."

Vargas, who also worked at The Huffington Post, was born in the Philippines. He says his mother sent him to the U.S. when he was 12. He lived with his grandparents in Northern California, attended high school there and graduated from San Francisco State University.

He says he is using his experiences to call attention to the problems facing the estimated 11 million illegal immigrants in the U.S., particularly as local and state governments increase efforts to identify and deport them and restrict their access to public education and other services.

Vargas said he decided to take an activist role when Congress failed to pass the DREAM Act in December. The measure (Development, Relief and Education for Alien Minors) would establish a path to citizenship for illegal immigrants younger than 36 who arrived in the United States as children, have lived here for five years or more, and are attending college or serving in the military.

More than 800,000 of the roughly 11 million illegal immigrants in the nation could have been eligible.

"Are we seriously going to deport 11 million people?" Vargas told ABC News. "That's the estimated number of undocumented people in this country. We're not seriously going to do that. We have not had a really serious conversation about this issue. ... We are a part of this society."

The DREAM Act's failure has led to protests across the nation by thousands of people who would benefit from its provisions. Supporters say these people form the foundation for a permanent activism among a new generation of assimilated and educated young immigrants like Vargas who believe, as he does, that they already are U.S. citizens in nearly every way. Dozens of them have also publicly revealed their illegal status.

Since then, key Republicans in the House have pledged to thwart any legislation that would provide a path to citizenship and enact measures that increase enforcement.

Rep. Lamar Smith (R-TX), chairman of the House Judiciary Committee, is leading the effort, along with Rep. Steve King (R-IA), chairman of the House subcommittee on immigration. King has introduced a bill that would amend the Immigration and Nationality Act. The 14th Amendment grants citizenship to "all persons born or naturalized in the United States, and subject to the jurisdiction thereof," and King's bill seeks to define the meaning of the latter phrase to exclude children born in the U.S. to parents who are illegal immigrants.

On Wednesday, Senate Democrats pushed back with a proposal crafted to draw support from Republicans by including stronger enforcement provisions. The bill, drafted by Sen. Robert Menendez (D-NJ), would increase border security and employer sanctions, as well as require the undocumented to register with the government as part of a process toward gaining legal status.