Accessibility links
Weak Jobs Market Takes Heavier Toll On Black Men Dramatic losses in construction and manufacturing have led some economists to dub the downturn a "man-cession," saying it hit men worse than woman. And it's been even harder on black men, whose unemployment rate is about double the national average. Economists don't see a big improvement soon. 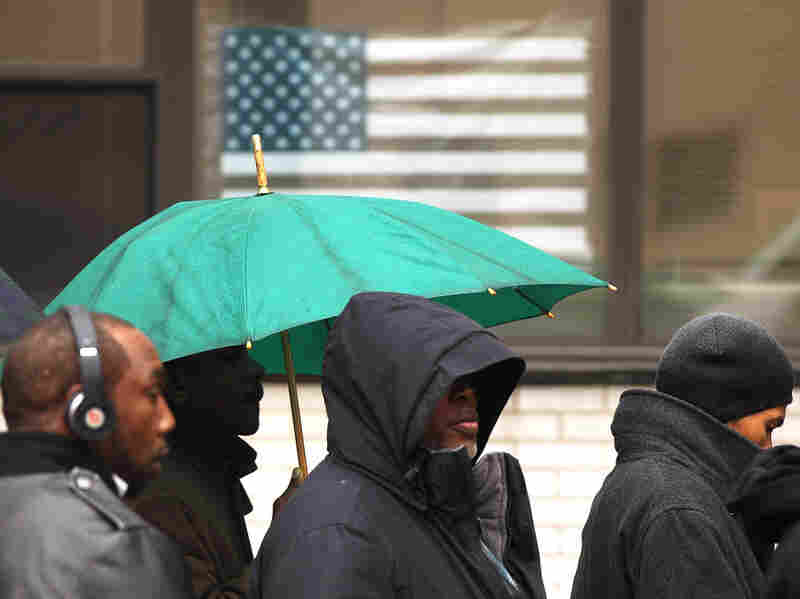 President Obama spent Friday pushing job creation in manufacturing, but he's getting increasing pressure for job results from a key part of his base: African-Americans.

The unemployment rate for black men is about double the national average — and economists don't expect that number to fall to the single digits anywhere in the near future.

So while those dealing with unemployment wait for the government to create jobs, they turn to groups like Michigan Works, a public-private collaboration in Ypsilanti, Mich., that helps get the unemployed retrained and back into the job world.

George Toles with Michigan Works says those who come in for help can get Internet access for job searches, interview and resume training, as well as other help looking for work.

"They can make use of our fax and copy machines, our interview rooms where they can go in and talk to employers," he says.

Ypsilanti is about 30 percent black, but Toles says the majority of the clients he sees in a day are African-American.

One of those clients is Fernando Payne, a carpenter who hasn't had full-time work in 3 1/2 years since the housing market collapsed.

A chart showing the unemployment rates for the total population, Hispanics or Latinos, and African-Americans from 2006 to 2011.

"When the bottom fell out, I was probably the first one that felt it," he says.

Payne says he is luckier than others: His wife has solid work as a nurse, so he has been taking care of their four children and is going back to college to get a degree in business administration. Payne says even with extra training, he's still finding it very hard to find a job.

"One of the unique things or features this recession was that it was called a 'man-cession,' " says Bill Rodgers, a professor of public policy at Rutgers University in New Jersey.

"White men and African-American men and Latino men really bore the brunt of it because of the dramatic loss or contraction in construction and manufacturing," he adds.

Rodgers says for the unemployment rate for minorities to fall back down into the single digits the U.S. economy would have to have the kind of growth it had in the 1990s.

"What distresses me more than anything is that it has gotten worse," says Marc Morial, head of the National Urban League. "Here we are 50 years after the glorious 1960s, and the problem of unemployment in the black community is as bad as it's ever been."

Earlier this week the U.S. Conference of Mayors issued a report showing that cities with large black populations — like Detroit and Cleveland — won't see single-digit unemployment this decade.

"To some extent [the report] should be a wake-up call," Morial says. "I think what it says is that if we do nothing, we are in for a period of a decade or longer of very high unemployment. And the social cost and the human cost of that are something we haven't even calculated as a nation."

Morial says he wants Republicans and Democrats to focus on job creation, but he's especially looking toward the president for leadership.