Accessibility links
For AARP, 'Monumental' Shift On Social Security? The nation's largest advocacy group for seniors has been the most powerful defender of Social Security for decades. But a recent article that said AARP had dropped its long-standing opposition to cutting Social Security benefits has the organization scrambling to explain. 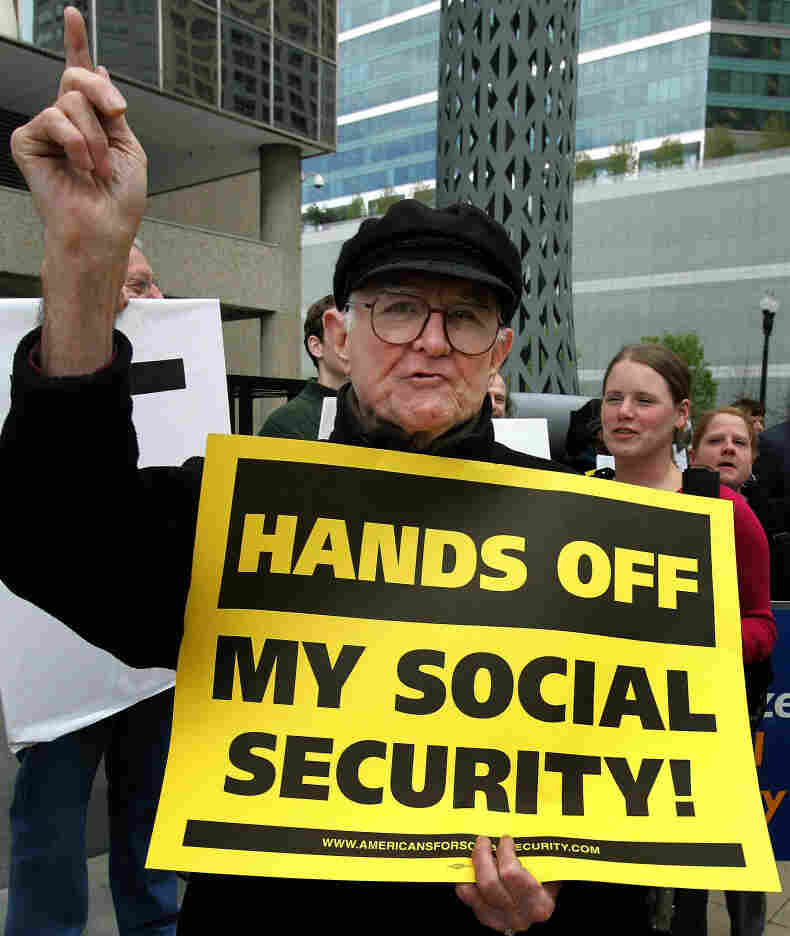 Bob Ducharme protests changes to Social Security in front of Chicago's Social Security Administration office in 2005. Until recently, AARP had not conceded that Social Security benefits may need to change in the future. Tim Boyle/Getty Images hide caption 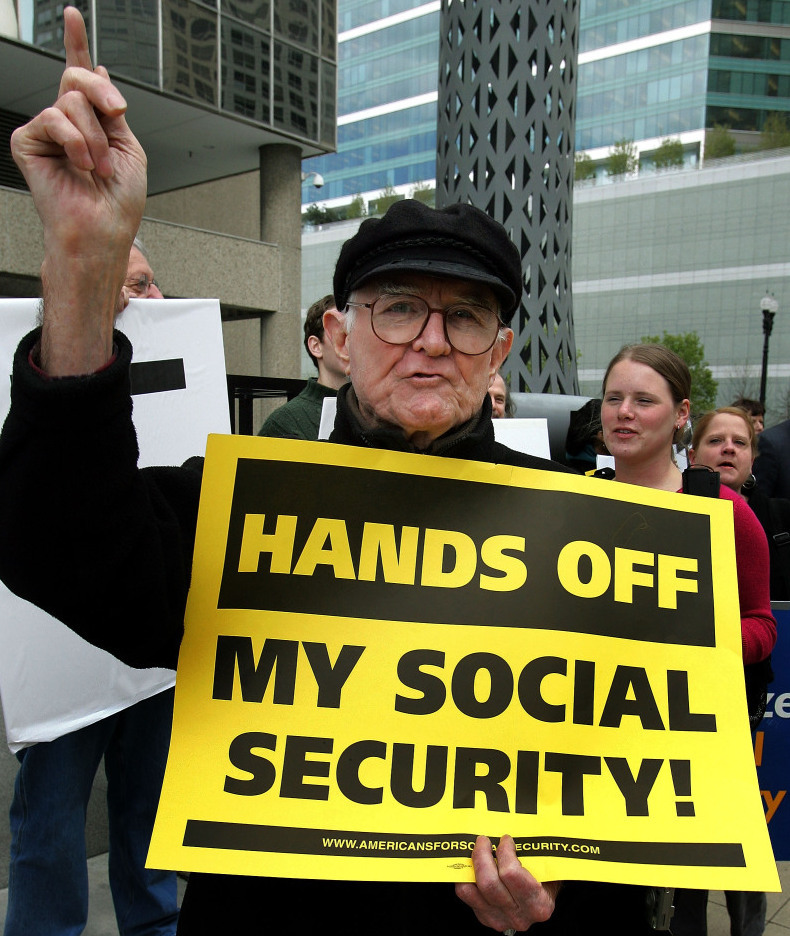 For decades, AARP — the nation's largest advocacy group for seniors — has been viewed as the most powerful defender of Social Security. As a result, any hint that the organization might entertain benefit cuts would be seen as an abrupt about-face.

But that's precisely what happened a few days ago, when a front page story in the Wall Street Journal proclaimed that the organization had dropped its long-standing opposition to cutting Social Security benefits.

Almost as soon as the story appeared, AARP officials called it inaccurate and said it misconstrued the organization's position. There had been no change in policy, they said.

But what really rankled David Certner, the organization's legislative policy director, was the timing of the story. It appeared just as negotiations on raising the federal debt ceiling were kicking into high gear. And Certner says it left the impression that AARP would not oppose benefit cuts as part of the effort to reduce the deficit.

But while Certner and other AARP officials scrambled to distance themselves from the idea of cuts now, they did not dispute another major tenet of the story — that AARP recognizes benefit cuts in Social Security may be unavoidable in the future. But it wasn't something the organization wanted to see highlighted on the front page of a major newspaper.

'The Ship Was Sailing'

"It's been greeted as a monumental shift," Kingson says. "AARP is being complemented by all those folks who've been working to cut Social Security."

According to the most widely used estimates, there's enough money to pay full Social Security benefits until 2036. But after that, if nothing has changed, recipients would get nearly 25 percent less.

The shortfall could be addressed with additional revenue, changes in benefits or both — and proposals on what to do are already circulating in Washington

In an apparent reference to the tough negotiations that are likely to accompany any long-term fix, John Rother, AARP's policy chief, told the Wall Street Journal, "The ship was sailing. I wanted to be at the wheel when that happens."

To Kingson, that sounds like AARP is too willing to compromise just to get a seat at the negotiating table.

"You know they talk about the ship — as the ship moves forward, my worry is that the ship might be the ship Titanic for older Americans, and for people with disabilities and for our kids unless they redirect what they're willing to accept," Kingson says.

Being Part Of The Debate

AARP's Certner rejects the suggestion that his organization has sold anyone out. He says AARP wants Americans to know that some people in Washington are talking about significant changes in Social Security benefits.

The first incarnation of AARP was the National Retired Teachers Association. The association was started in 1947 by a retired high school principal who wanted to promote "productive aging" and health insurance for seniors.

Eventually the association evolved to incorporate all seniors and became known as AARP. As the organization grew, it partnered with insurance companies willing to offer services and benefits to retirees.

Today, AARP has roughly 40 million members and one of the most powerful lobbies in Washington, D.C.

"We need to make changes to Social Security, not simply to put cuts into the statute," he says. "We will have that broader debate and we welcome that broader debate. And we are willing to take all these options, including those options we don't like, out to our members, out to older Americans, out to the entire population so they can see what's being proposed. "

Making changes to Social Security for the long term won't be easy or quick. Andrew Biggs, a scholar at the American Enterprise Institute, a Washington think tank, says AARP will be more effective in negotiations if it stakes out a moderate position.

"If you are an organization and you say we are going to stand with zero cuts to fix Social Security when a bipartisan commission appointed by President Obama is saying we should do it with two-thirds benefit cuts, you become basically irrelevant to the debate," Biggs says.

Then again, AARP has roughly 40 million members and is a huge and sophisticated lobbying machine — so whatever it does will be hard to ignore.

For now, AARP is in damage control mode trying to undo the perception that it is open to making benefit cuts now. And it's fighting on another front, too. Some of the organization's members are signaling their unhappiness by tearing up their membership cards.