Accessibility links
Food Bank Shortages Lead To Innovation Food banks in the U.S. are seeing increased demand for limited resources. One in Tennessee is thinking up new ways to combat the shortage. 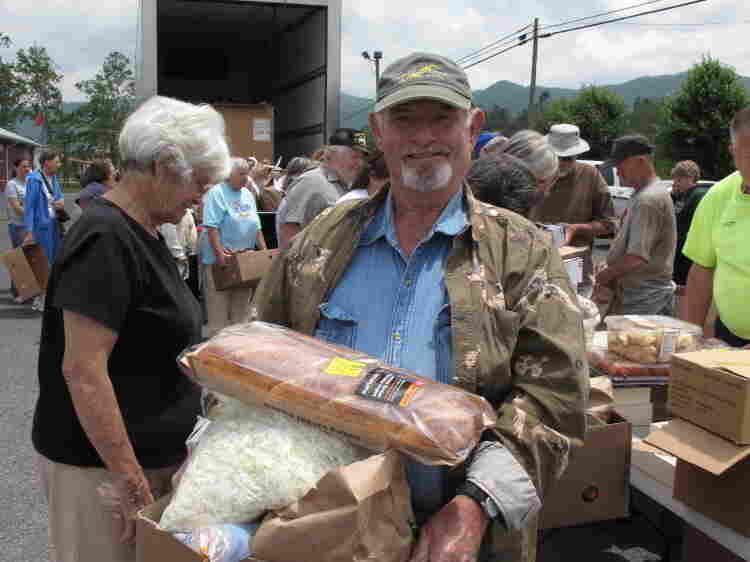 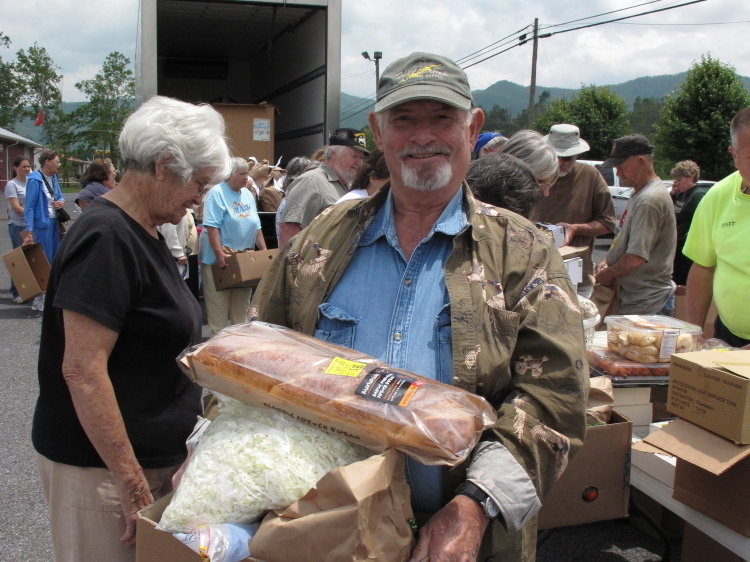 Food banks around the country are trying to keep their shelves stocked as more people in the U.S. struggle to get enough to eat. Increasingly, that means finding new ways to salvage food that would otherwise go to waste.

One innovation is being tested at the Second Harvest Food Bank of Northeast Tennessee. In a back room at the food bank's warehouse in Gray, Tenn., dented and crushed cans containing everything from green beans to beets are piled high on a counter.

In the past, these cans all would have been thrown out, because no one knew whether bacteria had slipped through a crack, spoiling the contents.

But Scott Kinney, who's in charge of finding food supplies for the food bank, says that might be about to change.

He puts several damaged cans into a box-shaped machine with a clear lid. It's a vacuum packaging machine — the kind usually used to seal food in plastic.

"Right now it's setting up the vacuum," he says, as the machine motor starts to hum. "You can watch; the cans will move a little bit as the vacuum gets to its highest pressure point."

The cans vibrate, then puff up like little balloons as the machine sucks out all the air in the chamber. They return to normal when the machine stops.

Follow The Food: See How The Donation Process Works 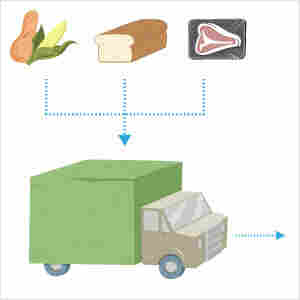 Follow The Food: See How The Donation Process Works
NPR

Kinney takes out one of the cans, running his hand along the outside. It's dry, which is a good sign. He says if there had been a hole, the vacuum would have sucked out some of the food.

Kinney says this system is still part of a pilot program, but at this food bank alone, it could mean tons of additional food for needy people. Out of 300 cans run through the machine the day before, only one had to be thrown away because it showed signs of a leak.

"The good news is, it was cat food," Kinney says.

Rhonda Chafin, the food bank's executive director, says Second Harvest of Northeast Tennessee distributes about 8 million pounds of food a year, but it needs more because demand continues to grow.

She already gets lots of donations from local supermarkets and retailers, but she has her eyes on other potential donors.

"We still have hospitals, hotels, caterers, restaurants that could give prepared food that has not been utilized, that's still in the kitchen, that was left over," Chafin says.

The challenge is convincing potential donors that it's a good thing to do, and then finding a way to store and transport the food safely.

Jonathan Bloom, author of a book called American Wasteland, says Americans squander about 40 percent of the food produced in the U.S. — or 150 billion pounds a year. He says that's far more than what's needed to feed the hungry.

"All throughout the food chain, there's a winnowing process, where anything that doesn't look quite right or isn't the right size gets cast aside," Bloom says. "And this squandering of perfectly edible food is happening from farm to fork. The main culprit here is wanting our food to look perfect."

He says lots of retailers prefer to throw damaged or bruised food away, rather than donating it, for fear of being sued if something goes wrong — even though there are laws protecting donors against such suits.

Farms are another promising source of more food donations, says Vicki Escarra, president and CEO of Feeding America, a network of 200 food banks.

"We know that today, there is 6 billion pounds of produce that is grown, but never distributed," she says. Much of it is plowed under when market demand falls short. Now, Feeding America is talking with farm groups about how to get a billion pounds of that food a year to the poor.

"The good news is it's healthy food, which clients need," Escarra says. "The challenging thing is a billion pounds is a lot of food and it is highly perishable."

So, along with buying machines to check out damaged cans, food banks are likely to be in the market soon for more refrigerated trucks and mobile pantries, so they can get all this produce quickly and safely to those who need it.