Accessibility links
Bill Clinton Plays Not My Job Sure he's a former U.S. president and a Rhodes scholar. But how much does this famously well-informed leader know about My Little Ponies? We'll find out. 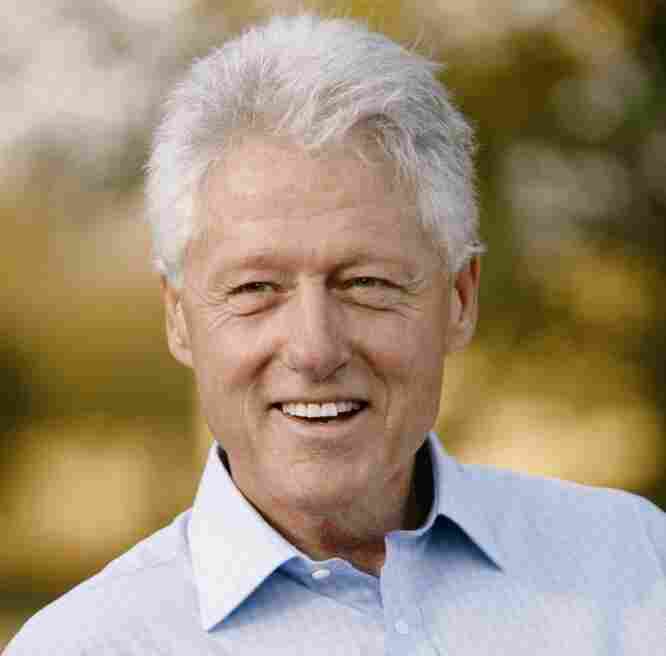 In 2005, President Clinton founded the Clinton Global Initiative to address "the world's most pressing challenges." Next week in Chicago, Clinton is hosting the CGI America meeting, with a focus on job creation and economic growth in the U.S.

And because there's no possible segue from such important work to a show as silly as ours, we'll just come right out and say it: We decided to quiz the former president and Rhodes scholar about the My Little Pony show. The famously well-informed leader answers three questions about Pinkie Pie, Fluttershy and Twilight Sparkle.

And now, the game where we ask knowledgeable people about things they know nothing about, it's called Not My Job. In 2005, President Bill Clinton founded the Clinton Global Initiative, which has gone on to help more than 300 million people around the world. He's coming to Chicago next week for the CGI America conference to help spur job creation in the U.S. And he joins us now in advance of his trip to Chicago so we can give him some tourism tips. President Clinton, welcome to WAIT WAIT...DON'T TELL ME!

SAGAL: Very excited to have you, sir. I have to ask, first of all, have you ever actually heard our show?

SAGAL: That is so totally the answer I wanted.

CLINTON: I have to be honest.

SAGAL: No, that's fine. I just want you to know that we've treated you with the utmost respect.

CLINTON: So you hope I enjoyed it while it lasted.

SAGAL: I do, I do. Trust me on that. So we're very excited to have you come to Chicago next week. What exactly are you going to be doing here?

CLINTON: Well, actually we're having an experiment. We're trying to see whether if we had one of these CGI, Clinton Global Initiative meetings where people all make commitments to do something, and we focused it exclusively on creating jobs and preparing people for the workforce whether we could actually get enough commitments to make a difference. And even more importantly, whether the act of doing it would receive enough attention that other people would say, well I could do those things in our community.

SAGAL: Now, I understand the way it works is in the Clinton Global Initiative in general you get people to make commitments in terms of something they're going to do for the cause at hand.

SAGAL: How do you enforce these commitments? If they don't come through on whatever the promise is, do they get, like, stern phone calls from you in the middle of the night?

CLINTON: Well, we haven't had to enforce them so much now. We just tell people if you come to our meeting and you don't make a commitment or you make it and you don't make any attempt to keep it, unless there's some third force preventing, if people don't make the commitments or don't try to keep them, then we just don't invite them back.

SAGAL: You snub them.

CLINTON: And the whole purpose of the meeting is to get beyond talking to doing. Once you actually have to put yourself on the line and then you know somebody's going to know whether you did it or not, it clarifies things quickly and you really just talk about what will work.

SAGAL: Well, actually I'm curious about your life these days. Can I ask you in general, what is more fun: being president or being ex-president?

CLINTON: I guess in terms of raw fun, I've never had any more fun in my life, I love this. But I loved being president too. Even the bad days were good. When you're president, you have more power to help more people, but you also are the prisoner of circumstances as well, and countervailing political forces more.

CLINTON: When you're a former president, you have much less power, but you have a lifetime of experience and contacts and if you've got the energy, you can bring influence to bear on a small but still fairly substantial number of things where you can concentrate on it because you don't have to change the subject when you wake up in the morning and there's something else in the newspaper.

SAGAL: I've noticed you haven't mentioned the advantages of having an army though.

SAGAL: I mean you see some problem...

CLINTON: An army, a movie theater, a weekend retreat.

CLINTON: A helicopter, a jet airplane and they always play a song when you walk in the room.

CLINTON: The worst thing about not being president anymore is I was disoriented for three weeks because nobody every played a song when I walked in.

CLINTON: I never knew where I was.

SAGAL: Mrs. Clinton didn't like just hum something for you just to ease the transition.

CLINTON: Well, you know, by the time I left office, she was a senator.

SAGAL: So you had to get an appointment to see her.

CLINTON: My major political identity has been as her spouse for the last decade and I like it that way too.

SAGAL: Did she have to give you a little lesson as you made that transition in standing to the side and gazing adoringly?

CLINTON: No, actually I sort of knew how to do that because...

CLINTON: Because I had observed it in other pictures.

CLINTON: No, that's not so bad. But what we try to do is to be home on the weekends. So for example, she went to Montego Bay in Jamaica to meet with the Caribbean nations on their problems with Narco trafficking...

SAGAL: That's what she told you. I just want to establish...

SAGAL: That was her story, but go on.

CLINTON: That's her story and she's sticking to it.

CLINTON: Then, she testified before the Congress on Libya and Afghanistan. But she's coming home, so we'll get to spend the weekend together?

MOZ JOBRANI: Do you guys Skype?

CLINTON: Do we what? No.

CLINTON: No. Well that's not quite true. We send texts when she's overseas or I'm overseas.

TOM BODETT: BBMing each other.

CLINTON: Now that I said that, I can't wait for somebody to pull them up.

CLINTON: They'll be boring but endearing I hope.

SAGAL: What do you think of all the comedians? Because you were the butt of some humor back during your presidency. Did you ever pay any attention? Did it ever bother you? Did you enjoy it or did you just not care?

CLINTON: Oh yeah, no I thought a lot of the "Saturday Night Live" guys were great.

SAGAL: Oh, you enjoyed that.

CLINTON: Oh yeah. Actually, a time or two, Phil Hartman came to Washington and did one of those press dinners with me once and we, you know, pretended. We took turns being me.

SAGAL: Who was a better you, him or you?

CLINTON: That night, I think he was a better me than I was. I was a little off my feed that night.

SAGAL: Well, Mr. President, we are delighted to have you with us, but we do want to play a game with you and today we're calling...

CLINTON: This is the part where you make me look like a fool, right?

SAGAL: The farthest thing from our minds. This is the part where you...

CLINTON: I'm going to create a job at my CGI America; somebody will volunteer to be my tutor for a year after this is over.

SAGAL: All right, we have invited you here to play a game we're calling?

SAGAL: So you're a former president, you're a Rhodes scholar, you're famously well informed. What could we be sure that an accomplished person like you would know nothing about? And then the answer came to us: the TV show "My Little Pony: Friendship is Magic."

SAGAL: Answer three questions, or answer two out of three questions about the wonderful world of "My Little Pony: Friendship is Magic" and you win our prize for one of our listeners, Carl's voice on their home answering machine. Carl, who is President Clinton playing for?

KASELL: The President is playing for Dave Parks of Chico, California.

SAGAL: So here we go. You ready to do this? One of the current My Little Ponys is Rarity. That is her name, Rarity. What is her particular enthusiasm? A: she loves her little line of toys called My Even Tinier Ponies.

SAGAL: B: giving other ponies makeovers. Or C: eating paste.

SAGAL: Yes, giving other ponies makeovers. Yes, that is in fact Rarity's...

SAGAL: Big enthusiasm. Very fashion conscious, our Rarity is. All right, when ponies in Equestria discover their true talents in life, they earn something. What? A tattoo on their flank, known as a cutie mark. B: a title, such as Fluttershy the Inventive. Or C: the right to mate.

SAGAL: A. You're going to go for A, a tattoo known as the cutie mark? Oh, you're right, sir.

JESSI KLEIN: I have to say I think it's probably fair to say this is the highest stake situation President Clinton has ever been in.

SAGAL: I think so.

KLEIN: In his entire life.

SAGAL: And he's doing so well.

SAGAL: All right, well let's see if you can be perfect. The ponies' most powerful enemy is which of these? A: Krastos the Glue Maker.

CLINTON: If he's not, he ought to be.

SAGAL: Yeah, I know. B: the evil pony Nightmare Moon. Or C: the cynical grownup, Chester.

SAGAL: B, you're going to go for the evil pony Nightmare Moon. You're right, Mr. President.

SAGAL: Nightmare Moon is released in the opening episode from the prison where she's been held for a thousand years, and is only defeated by the ponies working together, and then they have a party.

SAGAL: Carl, how did President Clinton do on our quiz?

KASELL: He had three correct answers. So the President wins for Dave Parks.

SAGAL: Another victory for you, sir. You've done so much. Been elected twice, governor of Arkansas, the youngest governor ever. How does this stack up?

CLINTON: It's right up there.

SAGAL: President Bill Clinton is hosting the Clinton Global Initiative meeting next week in Chicago, with a focus on job creation right here in the United States. President Clinton, thank you so much for joining us on WAIT WAIT...DON'T TELL ME!