Accessibility links
In Old Age, Illness And Dying Can Be Postponed Gerontologist and commentator Dr. Mark Lachs tells some of his older patients there are plenty of reasons to remain active. Surprisingly, at a certain age, the likelihood of falling ill and dying starts to decline.

Dr. Mark Lachs says his older patients are like reliable cars. After a certain age, they are less likely to break down, and just keep rolling right along. Adrian Kinloch hide caption

Gerontologist and commentator Mark Lachs says research in aging shows that once people reach a certain age, rates of disease, disability and death start to decline.

I have a 98-year-old patient who's not only independent but rather dashing. He recently asked a series of questions that reminded me of one of the most intriguing scientific papers in gerontology.

Is it OK if he has a little cheese and butter from time to time? In modest amounts, he assured me.

Is an occasional glass of wine OK?

And here's the kicker. Is it still safe for him to make his annual solo pilgrimage to Switzerland, where he enjoys fresh air and a good hike?

Things and people in motion tend to stay in motion, and those that don't, stop — or worse. The older you get, the older you are likely going to get.

Now, look. Advancing age is a risk factor for a variety of medical conditions, as well as shoving off this mortal coil. But what if I told you there is a kind of "escape velocity" — an age at which the risk of death and disability actually begins to fall?

In a stunning paper a decade ago, James Vaupel, founder of the Institute for Demographic Research at the Max Planck Institute, looked at the evidence for this hypothesis in lower and higher organisms — yeast, fruit flies, worms and, yes, humans. He came to this startling conclusion: At the extremes of age in all these species, the death rate drops.

And here's the cherry-on-top finale of the paper: Vaupel decided to see if the data pattern is limited to living things. So he looked at death rates for — are you ready for this? — automobiles. Here "death" was defined as when a car's owner stops registering it. And indeed, the same "escape velocity" pattern was seen with old clunkers.

A subset of motor vehicles is simply unstoppable — the old Chevy or Honda that keeps going and going and going. Sure, it needs a few replacement parts over its long life, and it certainly gets dinged and dented, but after passing some astronomical odometer reading, the damn thing seems to be nearly indestructible. 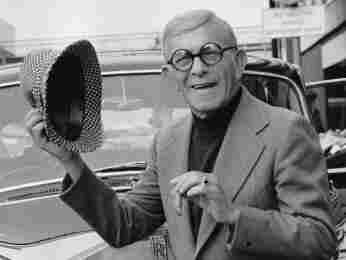 American vaudeville comedian and actor George Burns once said the key to longevity "is to make it to age 100, because very rarely do you read about people dying after that age." Evening Standard/Getty Images hide caption

We've all had certain inspirational people in our lives who behave the same way. Stated differently, things and people in motion tend to stay in motion, and those that don't, stop — or worse. The older you get, the older you are likely going to get.

So I'd argue that my 98-year-old patient's wish to take his annual stroll in the Alps is probably not only safe but actually therapeutic. I'm not a Pollyanna. We all have to go sometime. But like many of my patients, he seems to have achieved "escape velocity." And there's no reason for him to stop now.

Maybe the comedian George Burns, when asked about the secret to his longevity, had it right but for the wrong reason. "The key," he said, "is to make it to age 100, because very rarely do you read about people dying after that age."

Commentator Mark Lachs is director of geriatrics for the New York Presbyterian Health Care System, and professor of medicine at Weill Cornell Medical College. He's the author of Treat Me, Not My Age.