Accessibility links
Japanese: What Kind Of Changes Do We Want? It's been three months since the devastating earthquake and tsunami in northern Japan. But the rebuilding is going slowly, and the Japanese are asking deeper questions about what kind of country they want in the future.

At a hospital in northern Japan, two high school girls drag a muddy bed outside, puffing with exertion, before throwing it onto a huge trash heap. Other kids push wheelbarrows brimming with a brown sludge made of mud and seawater.

The whole high school class is cleaning up the waterlogged Minami-hama Chuo Hospital, near the northeastern city of Iwanuma. The tsunami three months ago left 10-foot-high brown tidemarks on the hospital's walls. Nearby, cars have been thrown into a newly created lake.

Sixteen-year-old Mana Sato is shocked by what she's seen. "We've been going on with our lives as normal," she says. "We need to take this more seriously, and change the way we live. We need to get our act together." 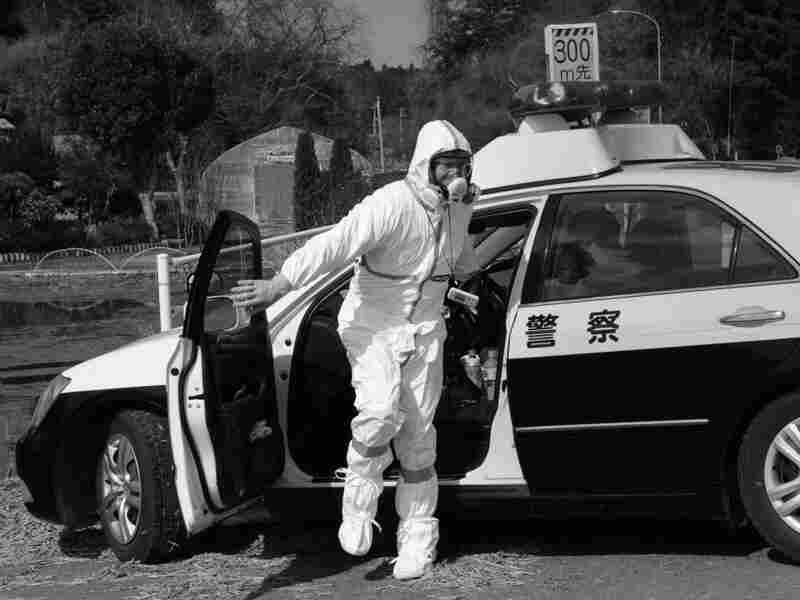 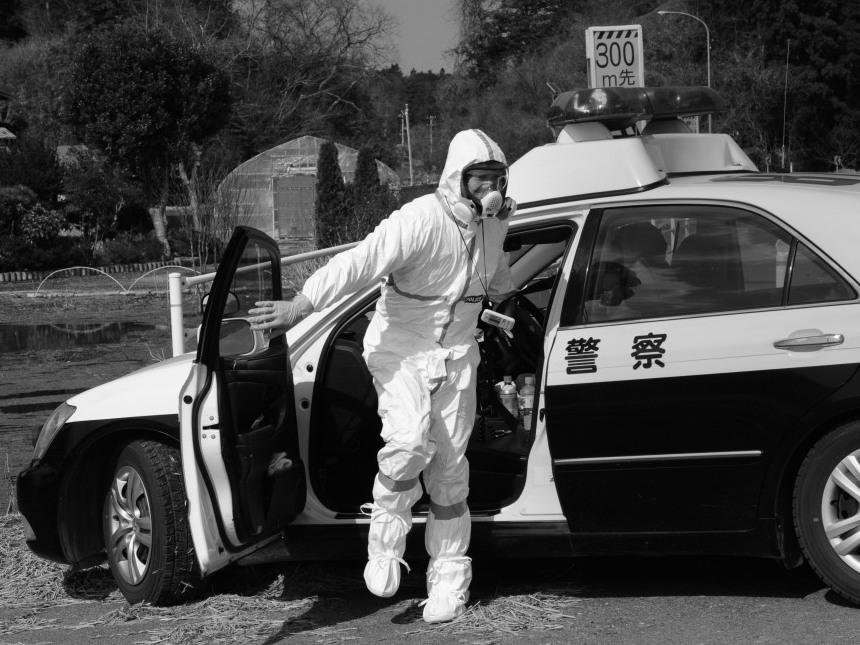 Police in a hazmat suit near the damaged Japanese nuclear plant.

Three months after Japan's massive quake, tsunami and nuclear crisis, the country is still coming to grips with the crisis: 23,000 people are dead or missing, and more than 90,000 were left homeless.

So how is this disaster changing Japan?

Many say they are not seeing the kinds of changes they hoped for.

They include Takashi Goto, whose job is finding housing for thousands of tsunami victims in Miyagi prefecture. Goto has the look of a harassed bureaucrat, and he totes a thick file brimming with statistics, all of which underline human suffering.

He wants Japan's politicians to stop playing politics and get him some money. "We've submitted a supplementary budget, and we're waiting for that money to come in," he says. "With the recent political turmoil in Tokyo, work can't continue that easily."

He's referring to Parliament's recent no-confidence vote on Prime Minister Naoto Kan. The prime minister managed to survive. But Kan has promised to resign at an unspecified future date, and the ongoing factional battles are delaying fiscal and welfare reforms. Goto's position shows just how financially dependent the local authorities are on the central government in Tokyo.

"One of the best things that can happen out of this disaster would be fundamental change in way local communities and authorities are run," says economic analyst Yuichiro Nakajima of Crimson Phoenix. He thinks the central government needs to devolve power — and more fiscal autonomy — to the regional governments.

That's led to a crisis of confidence in Japan's leaders.

"People are disgusted with irresponsibility of ruling political elite of all camps," says Temple University's Jeff Kingston, the author of Contemporary Japan: History, Politics and Social Change Since the 1980s.

"I think a lot of people want significant reforms. Japan obviously needs reform," Kingston says. "But politicians can't see their way out. Instead, we are treated to these spectacles — unseemly, untimely — of basically rearranging the deck chairs, when we need substantive action."

Others fear that the government is guilty of far worse. Among them is Ryuichi Hirokawa, a renowned Japanese photojournalist, and the founder of Days Japan magazine.

He has a longstanding interest in nuclear disasters, having traveled to Ukraine repeatedly since 1989 to cover the aftereffects of the Chernobyl disaster. 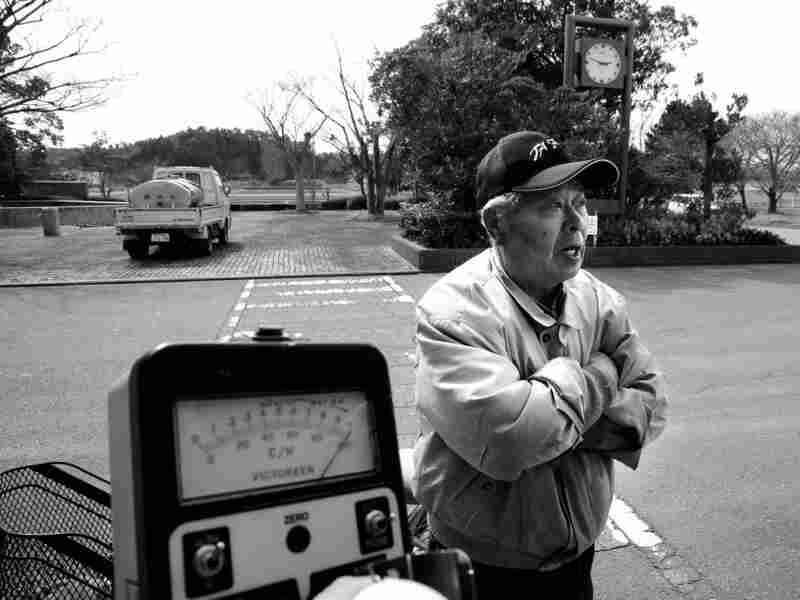 A Japanese man, who had believed official statements that radiation was not being released, expresses shock as a radiation monitor goes off the scale in this March 13 photo taken not far from the damaged Fukushima power plant. Courtesy of Ryuichi Hirokawa hide caption 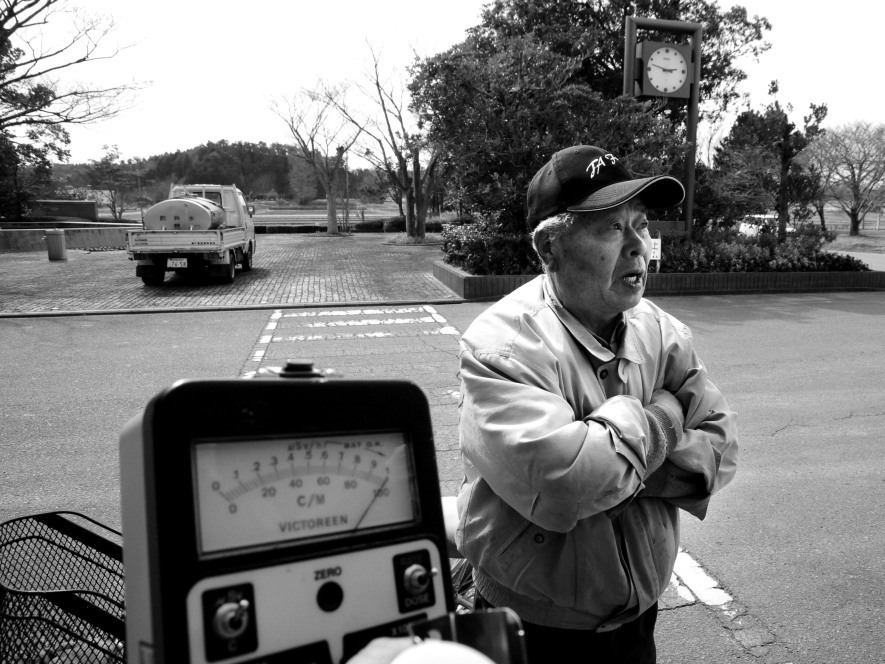 A Japanese man, who had believed official statements that radiation was not being released, expresses shock as a radiation monitor goes off the scale in this March 13 photo taken not far from the damaged Fukushima power plant.

On the day of the first explosion at Japan's nuclear power plant, March 13, he was in Futaba town, where the Fukushima nuclear station is based, carrying his own radiation monitor.

"The government was saying, 'There's no radiation. It's all fine. There's no problem,' " he says. "We went there, we had radiation monitors, and mine was off the charts. I always take this one to Chernobyl. It's never, ever gone off charts there."

He says the levels he measured that day were 100 times higher than the official numbers given by the government. At that point, he stopped taking photos and began stopping unwitting local residents to tell them to leave the area as soon as possible.

He even compares Japan's response unfavorably to the Soviet Union's action at Chernobyl. He points out that in Chernobyl, pregnant women and children were evacuated from an 18-mile exclusion zone around the plant within a week of the accident.

In Japan, by contrast, children are still going to school and living that close to the plant, absorbing radiation that has been leaking for the past three months.

"If you look at what the government and the power companies have learned from Chernobyl, the answer is nothing," Hirokawa says. "Or, it's one thing: They've learned that if something like this happens, you have to hide it."

The nuclear accident has produced a rare display of mass anger, with anti-nuclear demonstrations drawing as many as 20,000 people.

But Hirokawa says he's not convinced the activism will last. In response to the anti-nuclear sentiment, the government has promised to pass a bill promoting renewable energy.

Some, like Social Democratic Party leader Mizuho Fukushima, want the government to go further. They would like to see all 54 nuclear power stations phased out.

"Japan has to change," she says. "This needs to be a turning point to a new lifestyle without nuclear power."

Back at the tsunami-hit hospital in Iwanuma, the students finish their day with a prayer. Two people died here. This small army of volunteers is trying to restore this one pocket of order amid the chaos.

Ordinary people are heeding politicians' calls for unity, even if the politicians themselves aren't managing to do this. So far, Japan's disaster has not so much changed the country, as highlighted the need for change.