Accessibility links
Floodwaters Begin To Recede In Minot The Souris River is slowly retreating in Minot, where it peaked early Sunday at levels not seen in more than a century. About 4,000 homes are flooded, and a quarter of the town's 40,000 residents are displaced. 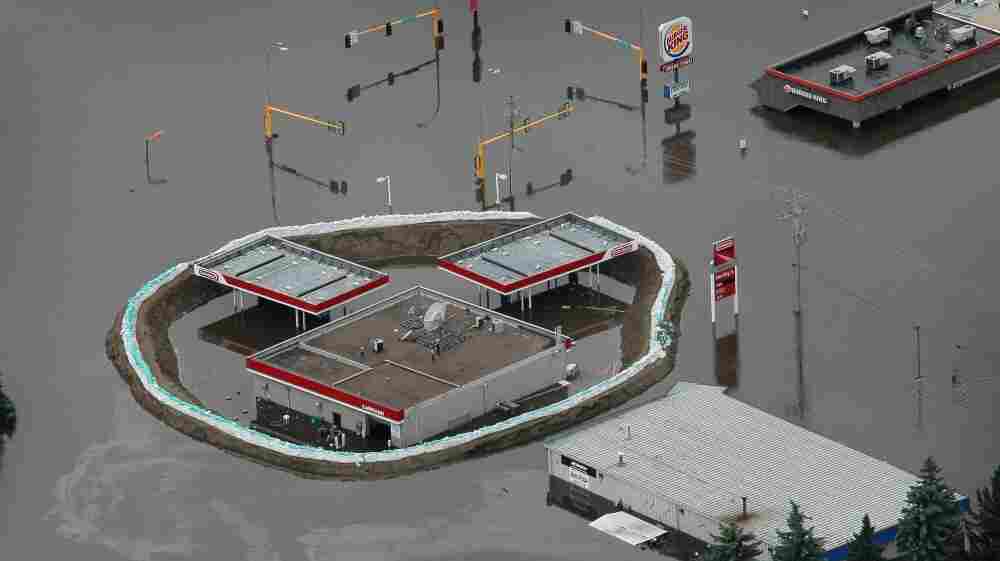 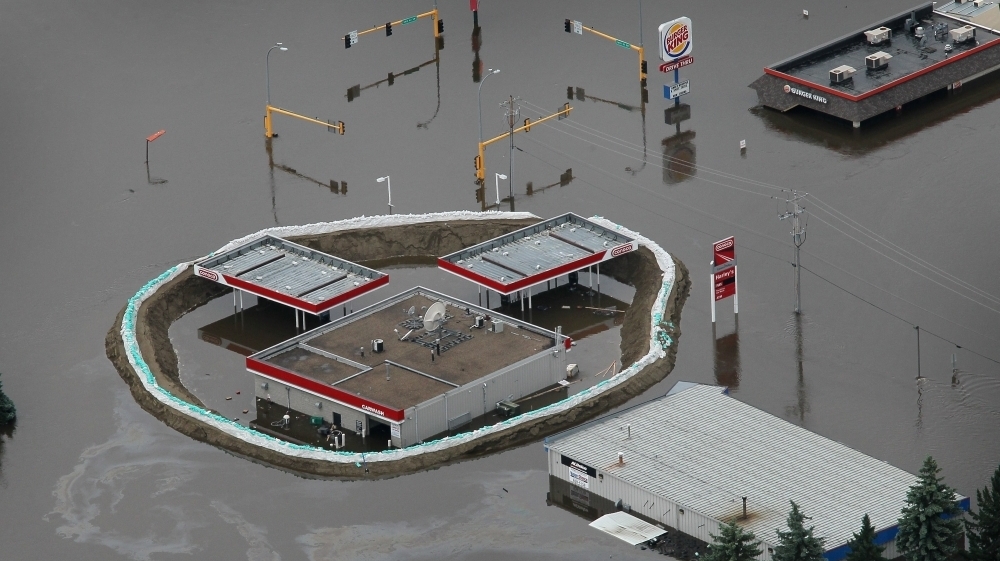 Businesses are surrounded by floodwater as the Souris River crests Sunday in Minot, N.D. The river surpassed its 1881 record level of 1,558 feet above sea level, flooding an estimated 4,000 homes in Minot.

The Souris River is slowly retreating in Minot, N.D., where it peaked early Sunday at levels not seen in more than a century. About 4,000 homes are flooded, and a quarter of the town's 40,000 residents are displaced.

The city's records, which date back to the late 1800s, show that there's never been this much water coming through town.

Michael Bart, who is in charge of the Army Corps of Engineers' effort, is trying to make sure the levees hold.

The water level may be dropping, but Bart won't lower his guard.

Figuring out just how much water is still coming Minot's way is Brent Hanson's job. He's a hydrologist with the U.S. Geological Survey, and he measures the river every day.

About 25 miles north of the city, Hanson sits in a small flat-bottom boat, floating in floodwaters. He has a computer on his lap and a small, bright-orange measuring device floating next to the boat.

The river is normally just 30 feet wide. Now it stretches more than 2,000 feet from shore to shore.

The normally dry river banks make this stretch of the Souris a favorite spot for bird watchers, and the wildlife service installed an outhouse for them. Now the outhouse sticks up out of the floodwaters like a chimney, and the thick groves of ash and oak trees are almost completely submerged.

Motoring across the water, Hanson says the channel "should be coming up in a couple of feet here," indicating that the boat hasn't even reached the river channel yet. A few minutes later, he reaches the other side and takes his readings.

He'll make three more trips back and forth, then average the results. His numbers are used by everyone from the National Weather Service to the governor's office.

North Dakota Gov. Jack Dalrymple says it hasn't been that easy to get accurate river information north of the border. Record rainfall in Canada swelled the Souris, which begins north of the border and flows into the U.S. All of the river data are shared over the phone.

"Had we been able to read their gauges directly, we probably could have gained another day of preparation time," Dalrymple says.

Back in Minot, the Army Corps' Michael Bart says a section of the primary levee started leaking over the weekend, and crews had to build another earthen wall. Four houses were left behind the new levee.

"Unfortunately, those four houses may get flooded in order to save the whole neighborhood," Bart says.

But he says it wasn't a hard decision to make.

"You do what you need to do and get on with it," he adds.

He will be getting on with it for many more days to come. Bart says while this river has crested, the fight to control it is far from over.