Accessibility links
'True Blood' Returns; Let's Run Down The Gaudiest Moments Critic Mark Blankenship recaps the big moments in the fourth-season opener of HBO's True Blood, and just be advised: there may be cages involved. 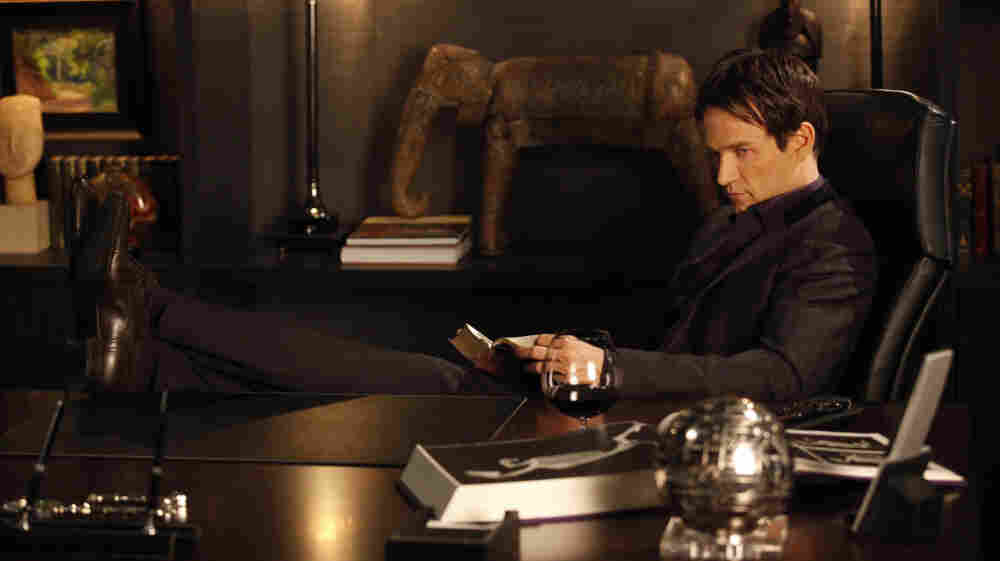 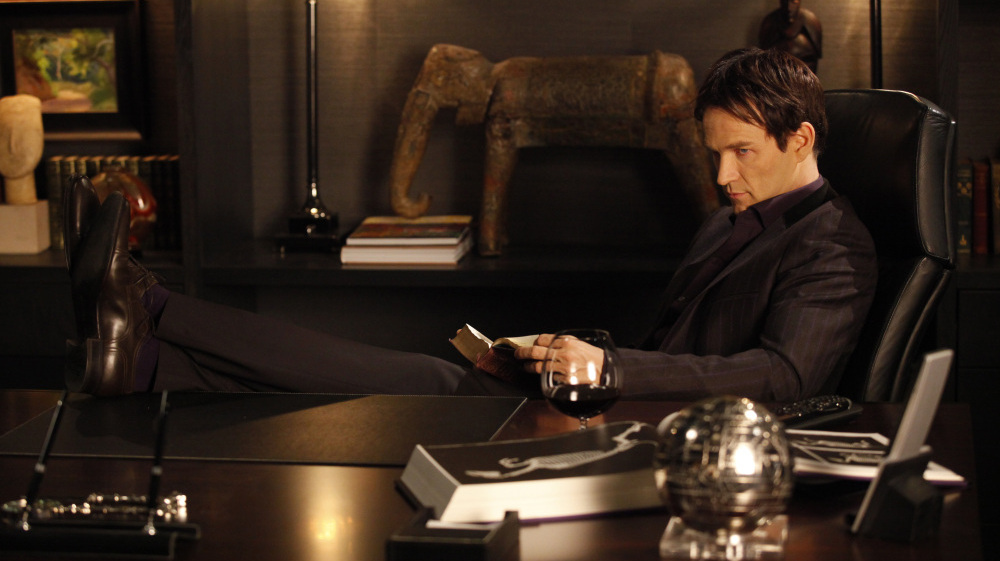 Critic Mark Blankenship has been writing about True Blood for quite some time, and in honor of the show's return, we've invited him to share his first Sucker Punch recap of the season here at Monkey See. You can find more of Mark's writing (including past Sucker Punches) already archived. Please be advised that this is an episode recap. That means that it will talk about what happened on the show, so "contains spoilers" should be obvious.

Welcome to Sucker Punch, the only blog post that finds the gaudiest moments on an episode of True Blood.

Before we dive into the Season 4 premiere, let me welcome the first-time readers of Sucker Punch, which is partly a recap of each episode and partly a hunt for the most outre moments in the series.

The only caveat: I don't read Charlaine Harris' novels, which inspire the major arcs of each season, so I don't judge the episodes against the books. It's fine if you want to do that, but please refrain from divulging major book spoilers in the comments section. That way, we can all be delighted by what's happening in Bon Temps.

And after watching the season premiere, "She's Not There," it's clear that a lot is going down.

You may remember that last year, we saw Sookie sucked into FairyLand. This year, we open on that magical world ... and it looks like a tacky high school production of Agamemnon. As in: cardboard columns, dry ice machines and fairies running around in tacky gowns. It's like an artless impression of what humans think fairies are like.

Surprisingly, very few people seem upset by this. The human transplants that are everywhere — including Barry, the psychic bellhop from the Texas hotel in Season 2 — are all happily eating glowing apples. Sookie, however, is suspicious, and she avoids the magical fruit. Then she notices that some of the fairies seem a little ... evil. At one point, she catches a glimpse of a horrifying monster skulking around. Wisely, she freaks.

As she's flipping out, the fairy queen steps forward and tries to make Sookie eat an apple. Even though she looks pretty at first, Our Dread Lord Empress keeps dropping her disguise and revealing the ghoul underneath. Eventually, Sookie attacks her, and the Athenian set falls away, revealing a scorched desert landscape. As it turns out, FairyLand was just a cheap illusion. The fairies wanted to fool the human-fairy hybrids into staying in their realm forever, as a way of protecting their magical race.

It's natural that Sookie would be onto them: Every beautiful creature on the show — Maryann the maenad, the sexy vampires — has a darkness behinds its light, and the fairies are an especially scary example.

But of course, the show never lets darkness simply negate light. It forces the two to wrestle for supremacy. To that end, FairyLand threatens Sookie's life, but it also reunites her with her grandfather, who hasn't aged a day since she saw him 20 years ago. He's been munching on those lightapples, unaware of passing time, and when Sookie eventually escapes back to earth, he comes with her.

Unfortunately, because he has tasted the forbidden fruit of a phony paradise, he can't survive on Earth anymore. That fact leads to a softly heartbreaking death scene in which Sookie, once again, loses someone she loves. (Would anyone like to write a term paper on how FairyLand, with its dangerous apples, is a warped Garden of Eden? Abstracts are due Tuesday.)

Sookie isn't the only one dealing with loss, either. In a lovely parallel, we learn that everyone else on the show has lost her, since her few minutes in FairyLand equaled almost 13 months on earth.

And may I say: This flash forward really works. The first three seasons covered just a few months in chronological time, and the show was in danger of stagnating. The characters needed a chunk of time to evolve, to process and move beyond plot lines that had reached their natural conclusions. This clever solution lets them breathe without giving us whiplash.

Instead of just opening with a "thirteen months later" title card, the episode makes the time travel a natural part of the story. The missing months become important because they were missing, at least for Sookie, so they feel like more than just a gimmick.

That also makes it fun to discover what people have been doing while she was gone: Tara, for instance, is now "Toni," a lesbian cage fighter in New Orleans. (Obviously!) Arlene's possibly-demonic baby is tearing the heads off Barbie dolls, and Sam is off in anger management with a group of shifters because he shot (but didn't kill) his brother Tommy.

Oh, and Tommy's apparently a born-again Christian being tended by Hoyt's mama, while Hoyt and Jessica are struggling with domestic bliss.

Then there's Jason. The poor guy thought he'd lost his sister — his last remaining relative — and he dealt with it by becoming the surrogate father to all the desperately poor shapeshifters in Hotshot. When they lock him in an ice chest, they just underscore that he always gets punished for doing the right thing. Meanwhile, Eric is rewarded for being bad: He owns Sookie's house now, which means he can sneak up on her whenever he likes.

This real estate venture would be the Sucker Punch of the week, except that Bill has become the King of Louisiana and he's using his power to infiltrate a coven of witches run by Fiona Shaw. Could it be that Sad Eyes Compton is EEEEVIL after all?