Accessibility links
A New Generation of 'Dreamers' Goes Public In the wake of a journalist's disclosure that he's an illegal immigrant, other young illegal residents feel more comfortable in sending the authorities a pointed message: Come and get me.

Citizenship for illegal immigrants has been a cause championed mostly by politicians and other advocates facing no personal threat of deportation. 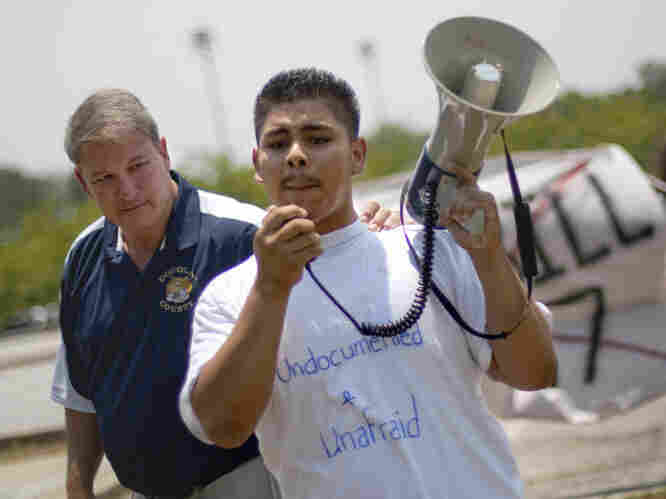 But a prominent journalist's recent disclosure that he's an illegal resident has highlighted a growing number of activists "coming out" as illegal, effectively sending a pointed message to authorities: Come and get me.

"It was so empowering to read his story and see just how honest he is," North Carolina activist Viridiana Martinez says of reporter Jose Antonio Vargas. "The biggest obstacle we have is fear. So, coming out is a declaration that I am dropping the fear. I am taking my struggle in my own hands."

Last week, Vargas joined that struggle by disclosing publicly that he had broken numerous laws for more than a decade to conceal his citizenship status. Vargas said he came out to take an activist role on immigration reform after Congress failed to pass the DREAM Act in December.

The bill (Development, Relief and Education for Alien Minors) has been reintroduced in the Senate and was the subject of a subcommittee hearing on Tuesday. It would establish a path to citizenship for illegal immigrants younger than 36 who arrived in the United States as children, have lived here for five years or more, and are attending college or serving in the military. More than 800,000 of the roughly 11 million illegal immigrants in the nation could be eligible.

Martinez, 24, who disclosed her illegal status at a rally last year, is one of thousands of young adults and teens who have organized nationwide based on a new strategy that places themselves on the front lines in the debate over immigration reform. Once an honors student whose college dreams ended when she couldn't produce a valid visa, Martinez has become a full-time activist.

This so-called DREAMers movement has gained wide attention for engaging a new generation of young immigrants who have grown up in America and would have been granted legal status under the legislation. Despite the bill's failure, organizers say thousands of young people continue to "come out," fueling an expansion of grass-roots efforts in multiple cities and making legislative pushes on the state level.

The Chicago-based Immigration Youth Justice League, one of the nation's earliest and most active DREAMer groups, was heavily involved in the successful passage last week of the Illinois DREAM Act, which establishes a scholarship fund and other tools to help children of illegal immigrants attend college. And in North Carolina, an effort to require parents to disclose their children's status to school officials recently failed in part because of the work of the North Carolina Dream Team, co-founded by Martinez.

"The operative word is galvanize. ... It takes guts. When they have something to lose, they get public sympathy," says Texas A&M University history professor Terry H. Anderson, author of the 1995 book The Movement and The Sixties: Protest in America from Greensboro to Wounded Knee.

A Gallup survey conducted earlier this month showed 59 percent of Americans view legal immigration positively, and 37 percent of them oppose it. The poll found that support for increased immigration has risen by 4 percent since 2009, while support for an immigration crackdown has decreased by 7 percent.

The DREAMers' frontal approach marks a departure from an older generation of illegal immigrants who have hidden from public view to avoid detection, while silently supporting the cause.

"Here is a generation of young people who have grown up, assimilated, become American in every way but their immigration status who were being told not to speak up, not to take a stand against this problem that directly affects them," says Domenic Powell, a spokesman for the North Carolina Dream Team.

The new push for disclosure makes sense for a generation raised in an era of another kind of "coming out."

DREAMers borrowed the term from the gay-rights movement, whose members have used the strategy to draw support for their own cause. DREAMers say many of their members — including about half of the Chicago organization — are also gay, like Vargas himself.

Anderson, who fought in the Vietnam War and later protested it, compares the DREAMers to activists of the 1960s and 1970s whose personal sacrifices gained public support for their causes, such as civil rights, an end to the Vietnam War, and later gay rights. Each movement was driven by young activists who had bucked the reticence of an older group.

"There are lots of similarities. The DREAMers feel that they are victims. They have a grievance. A 5-year-old boy is brought into the United States and when he gets older, they want to deport him. He doesn't feel that America is living up to its commitment. It's the same thing with African-Americans or women facing discrimination," Anderson says. 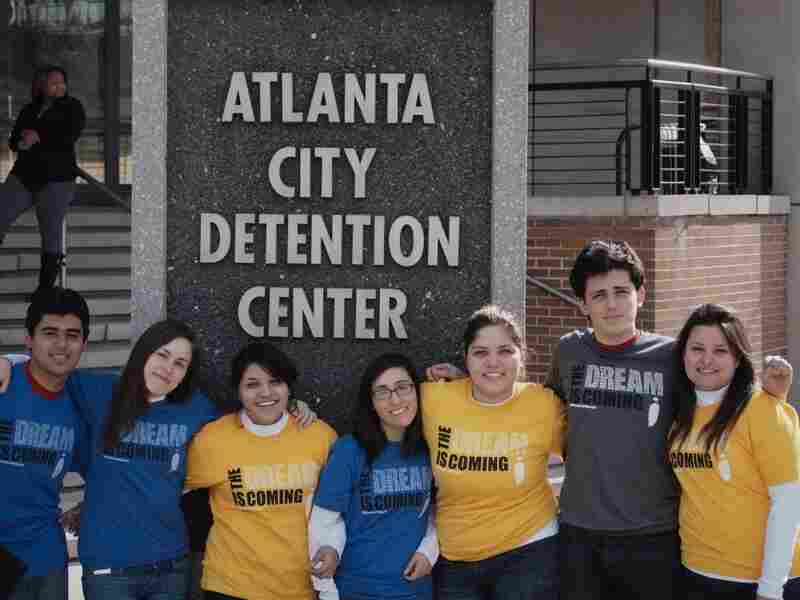 Young DREAMers including Viridiana Martinez (far right) and David Ramirez (second from right) stand outside the Atlanta Detention Center after they were arrested for publicly displaying their illegal status in Atlanta on April 7. Courtsey of the Immigrant Youth Justice League hide caption

Vargas' disclosure raised the specter that he would be targeted for deportation. A spokeswoman for U.S. Immigration and Customs Enforcement declined to directly address whether the agency might take such action.

But ICE's own recently stated positions indicate that he is most likely safe for now. ICE last week issued a memorandum granting its agents "prosecutorial discretion" to extend leniency to DREAM Act-eligible people and others while cracking down on those who pose "a clear risk to national security." Leniency would take the form of deferred deportation, usually for up to 12 months, at which time individuals could request an extension and potentially reapply every year.

On Monday, House Judiciary Chair Lamar Smith (R-TX) criticized the ICE memo as an attempt to circumvent immigration reform and "legalize millions of illegal immigrants." He said he plans to introduce a bill that would prevent ICE from selective enforcement.

I think we got special treatment. Trying to deport us probably would have caused too much of an uproar.

The new ICE approach also could explain why coming out hasn't made the DREAMers themselves targets for deportation.

In April, authorities in Atlanta had ample opportunity but took no such action after arresting Martinez and six others who staged a sit-in to protest a tough new immigration enforcement law passed by the Georgia Legislature.

"I think we got special treatment. Trying to deport us probably would have caused too much of an uproar," says David Ramirez, of Chicago, who was among those arrested in Atlanta. "It was calling the government's bluff, I guess."

Despite the reintroduction of the DREAM Act, its passage doesn't appear likely. It would almost certainly die on arrival in the House, where the Republican leadership has vowed to oppose any measure that provides a path to legal status for existing residents.

Their testimony is part of Democrats' effort to make immigration a 2012 campaign issue intended to put Republicans on the defensive with Latino voters. It's also part of the Obama administration's response to criticism from Latinos that the president has courted them but failed to deliver any results.

Duncan, a Chicago native, earlier this week lent strong support to the Illinois DREAM Act. Also this week, several other members of the Obama administration are expected to address immigration at the annual meeting of the League of United Latin American Citizens in Cincinnati. Among them are Health and Human Services Secretary Kathleen Sebelius and Labor Security Hilda Solis, who is Hispanic, both of whom are scheduled to speak Thursday.

Immigration advocates also have criticized Obama for increasing the pace of deportations beyond that of the Bush administration. Under the Obama administration, the number of deportations has increased to an average of about 341,000 per fiscal year, compared with an average of 251,000 under the Bush administration. Since Obama took office, an estimated 700,000 people had been deported by the end of the fiscal year ended September 2010, according to the latest figures published by the Department of Homeland Security.

The number of individuals deported by the Obama administration is projected to reach 1 million by September. Napolitano, whose department oversees ICE, has said efforts are focused on removing on criminals, but she has acknowledged that some DREAM Act-eligible individuals have been ensnared.