Accessibility links
FBI Invited Controversial Church To Talk To Agents The Westboro Baptist Church has been vilified for protesting at the funerals of U.S. soldiers. Yet the FBI invited the group to speak to its agents as part of its counterterrorism training program, stirring controversy within the bureau.

The Westboro Baptist Church is infamous for picketing soldiers' funerals with signs like "Thank God for Dead Soldiers" and "God Hates the USA." 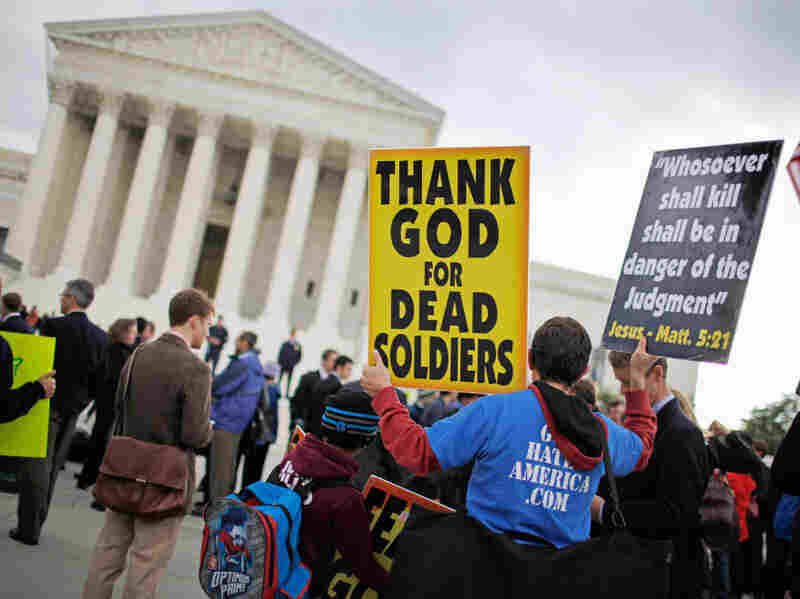 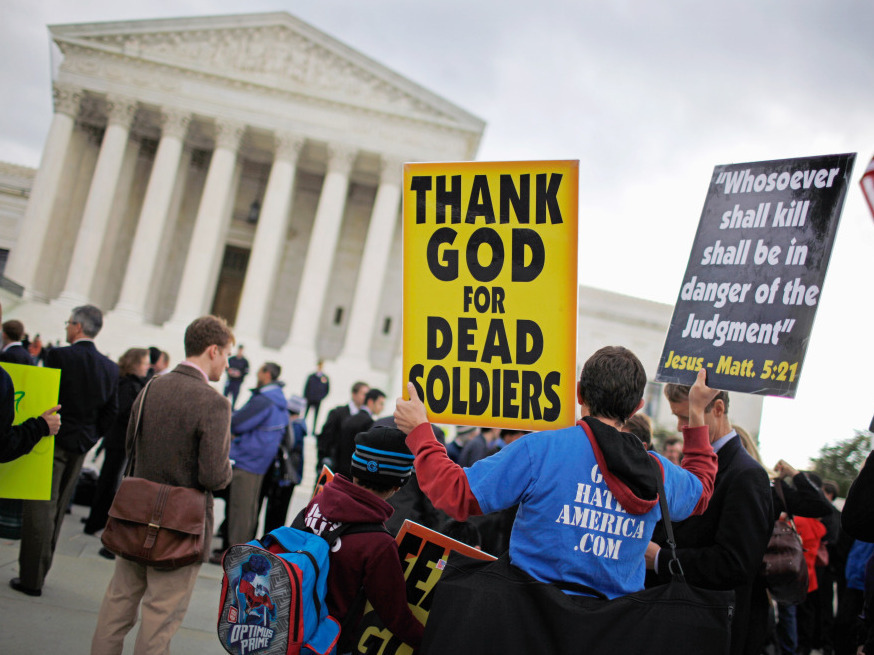 Jacob Phelps of Westboro Baptist Church demonstrates outside the U.S. Supreme Court during Snyder v. Phelps this past October in Washington, D.C.

Yet the FBI recently invited leaders of the fundamentalist church to the Quantico Marine base in Virginia to talk to FBI agents as part of the bureau's counterterrorism training program. But after four sessions this spring, the FBI canceled the arrangement amid criticism from inside the bureau, while church leaders claimed that they had been misled.

The church group, led by Pastor Fred Phelps and based in Topeka, Kan., says its protests are intended to tell the world that God is punishing the U.S. military for America's tolerance of homosexuality. The pastor claims to be the prophet of God's wrath.

The FBI first invited the church group to address the FBI's law enforcement training classes back in 2008. And initially, there were no apparent problems. But the most recent sessions, including three at Quantico and one in Manassass, Va., stirred up controversy.

Timothy Phelps, a church leader and the youngest son of Fred Phelps, said he spoke to local law enforcement professionals at the FBI Academy at Quantico and then again to agents who had been in the bureau three years or less at an FBI facility in Manassass.

He said the program was designed to teach agents "how to stay measured when they are speaking with a witness or a suspect with whom they have a strong, visceral disagreement."

Phelps conceded that strong, visceral disagreement is one of the emotions Westboro inspires. And that's what he found in the classrooms he visited. Officials say there were about 50 local law enforcement officials and agents in each session, and they say Westboro wasn't paid for its participation. Phelps confirmed that no money exchanged hands.

"We did an opening dialogue about the history of the church and what led us to this point in our ministry and specifically led us to the point where we were holding protests or pickets in proximity to the soldiers' funerals," Phelps said. "Then the class opened up and they were entitled to ask any questions they wanted."

Phelps said the sessions were contentious. "Some of the students in the class take the gloves off and basically push the envelope about, 'what will happen when the day comes that your so-called leader tells you to use violence,' " Phelps said. "Our leader won't tell us to do anything except what is written in scripture. We don't have a leader like what they want to believe we have. ... We have a preacher."

Law enforcement officials who attended the session said it was focused on domestic terrorism. They were told that the FBI invited Westboro members to the class so police officers and agents could see extremists up close and understand what makes them tick.

The FBI claims the church group knew this. But Phelps said he had no idea he was part of a domestic terrorism curriculum.

Phelps said if the FBI lied to them about why they were there, he would not be surprised. "Law enforcement across this nation uses false information frequently with us," he said. But there were people at the FBI who were surprised — and angry — when they found out about the Westboro sessions.

Invitation To A Military Base

At a minimum, the timing was terrible.

Westboro was engaged in a legal battle with the father of Marine Lance Cpl. Matthew Snyder. The father filed suit against the church after it protested at his son's military funeral. A Maryland district court ordered the church to pay nearly $11 million in damages, saying the demonstrations caused "emotional distress, intrusion upon seclusion and civil conspiracy."

An appeals court overturned the decision. Then around the time that Westboro leaders were at Quantico, the Supreme Court ruled that the church was allowed to continue its mocking protests outside military funerals because it's protected by the First Amendment.

The FBI official responsible for bringing in the church group did not want to be identified by name. He said he found the group personally distasteful, but thought police and FBI agents needed to learn how to engage people they disagreed with and find ways to build relationships with them.

He conceded that inviting a group that pickets military funerals to a military base was, at best, problematic. Officials said it was one of the reasons the fourth session took place at the FBI facility in Manassass.

The FBI has invited other controversial figures to speak to trainees in the past, including former members of the white supremacist Ku Klux Klan.

For his part, Westboro's Timothy Phelps said even though he thinks the FBI lied to him, he would come back to speak again if asked.

But that's unlikely to happen. A memo from the assistant director of the FBI's Training Division, Thomas Brown, put an end to Westboro's partnership with the FBI. It was one line long: the FBI, it said, is not to invite Westboro to any of its training sessions again.