Accessibility links
Solid Start Puts Bachmann In Front-Runner Territory A day after her formal announcement that she's running for president, Rep. Michele Bachmann headed to New Hampshire, touting her conservative credentials. And right now, she is the leading alternative to front-runner Mitt Romney. 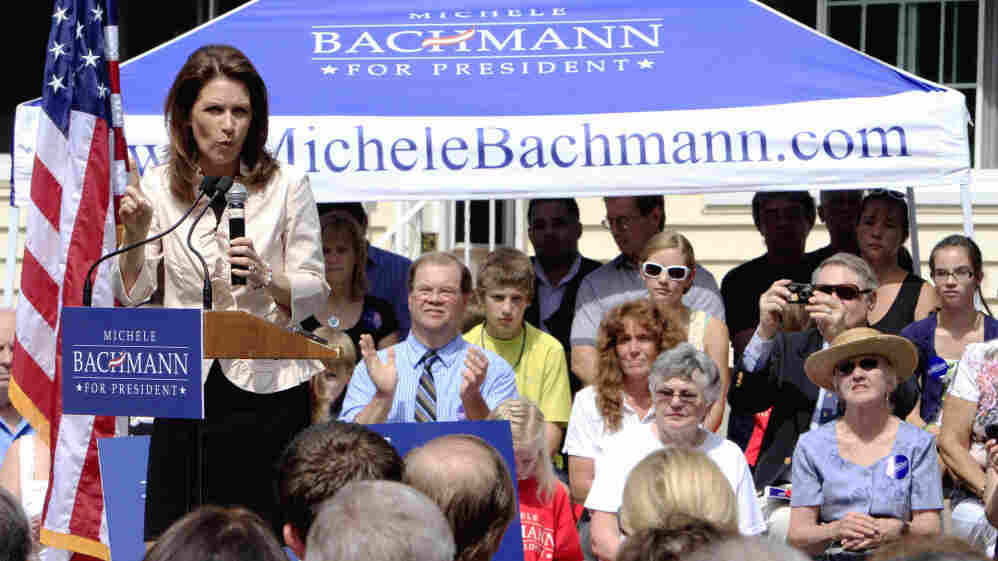 Republican presidential candidate Rep. Michele Bachmann of Minnesota continues her announcement tour in South Carolina on Wednesday. Bachmann's strong performance in debates and on the stump has vaulted her out of the second tier of candidates.

On Tuesday, Bachmann stopped at a backyard event in Raymond, N.H. Poised and polished, she slung the applause lines as she attacked President Obama:

Read The Full Transcript Of The Interview June 29, 2011

"In February 2009, the president gave an interview, and in that interview he said, 'If I failed to turn the economy around by the third year, then we will have a precedent for being a one-term president.' ... Do you think we should take him at his word? I do, too."

Bachmann sells herself as the complete Republican package: conservative on social, fiscal and national security issues. She boasts that she has a backbone made of titanium, and she touts her anti-establishment credentials.

"In my wallet, there's no card that says 'good ol' boys' club.' I take on the opposition party, but I take on my own party as well, because I believe it is principle over party. That's what comes first."

In Washington, Bachmann has a reputation as a rhetorical bomb thrower. But to conservatives like Wendy Dowdy, she's a conviction politician.

Brandon Stauber, an independent who plans to vote in the Republican primary next year, said he wasn't sure she was ready for prime time, "being only a three-term congressperson."

But "she was very polished," he said. "She definitely has her act together."

To Stauber, Bachmann is more appealing than the man who is running way ahead in the polls here.

"Definitely more lively than Mitt Romney, and has nicer hair, too," Stauber joked.

Bachmann's base is in Iowa, where she was born and where the Des Moines Register poll has her even with Mitt Romney, a former governor of Massachusetts.

The challenge for Bachmann is to avoid the fate of another polished populist candidate: former Arkansas Gov. Mike Huckabee. He captured the evangelical vote and won the Iowa caucuses in 2008 but then ran out of steam.

Bachmann's Moment: Can She Sustain It?

"We observed the last race, and we wanted to make sure that we laid groundwork in South Carolina, New Hampshire and Iowa," Bachmann said in an NPR interview. "We've spent about equal amount of time in all three states. We will be running a 50-state race, and that's what we'll have to do."

Two things are different already. Huckabee's rise in Iowa came late, and he never had time to raise a lot of money. Bachmann already is the No. 1 fundraiser in the House. And the anti-tax group Club for Growth, which was Huckabee's nemesis in 2008, gave Bachmann its highest ratings Tuesday.

Bachmann has been toning down her rhetoric as she prepares to compete on a national stage and prove to voters that her lack of executive experience isn't a problem.

There are two things she wishes she had said better and some facts she has gotten wrong. She no longer says Obama has anti-American views, for instance, but she won't take back this comment about the Obama administration:

"I do believe that this is a gangster government. It's gangster when you have the federal government deciding which car dealerships can stay in business and which can't — when they literally pull the rug out from people, and they have family-owned businesses for 70 years or more. That's wrong."

On Wednesday, Bachmann will be campaigning in South Carolina, where she should find a natural base of conservative Christian voters.

"She brings a very strong entrepreneurial, anti-tax, smaller-government message to the field," says Katon Dawson, a former state Republican Party chairman. "I find her very refreshing. But until you have a final field, and whether Gov. Perry gets in, is the talk on the ground here. It's a very fluid environment but anybody that discounts Michele Bachmann's chances, I think, is at their own peril."

Texas Gov. Rick Perry is the 800-pound gorilla on the sidelines of this race. If he gets in, he would fill the same political space as Bachmann: Tea Party hero, small-government conservative and evangelical Christian.

But Bachmann is the conservative woman of the moment, and right now, she is the leading alternative to the front-runner, Mitt Romney.