Accessibility links
Israel Vows To Block Flotilla From Reaching Gaza This week, boats carrying activists from all over the world — including the U.S. — are setting sail from Athens, Greece, to the Gaza Strip in an attempt to break Israel's naval blockade of the coastal territory. But Israel has warned that the boats will not be allowed to reach Gaza. 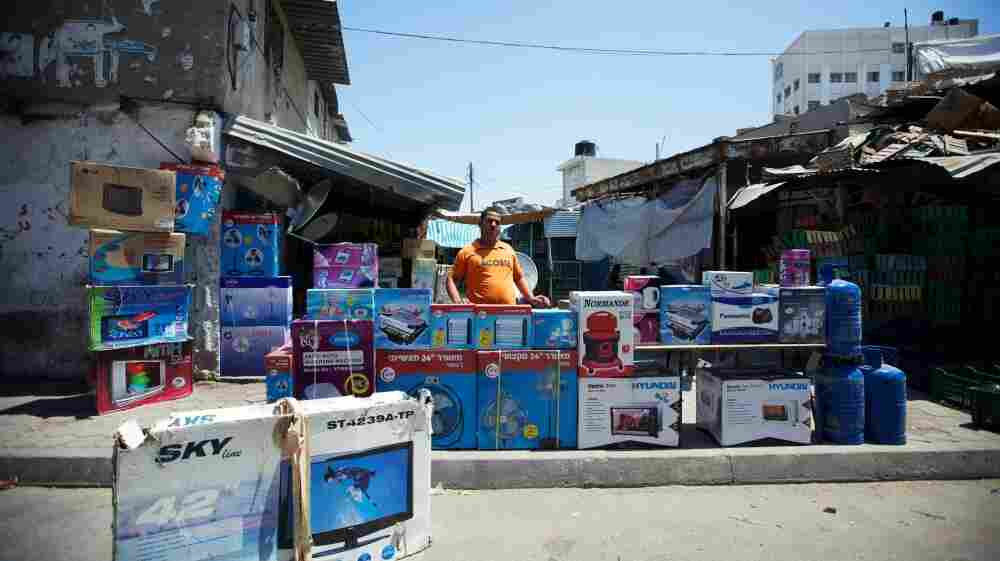 A store owner in a Gaza City market. Israel has eased the blockade of Gaza over the past year, and more commercial goods are reaching the territory. Jonathan Levinson for NPR hide caption

Activists in a small flotilla of vessels are set to again challenge Israel's maritime blockade of the Gaza Strip, just a year after a similar attempt led to a deadly confrontation in the Mediterranean.

Eight ships and 300 activists — many of them from the U.S. — plan to set sail this week from Greece. They say they're trying to deliver humanitarian aid to the coastal territory and highlight the plight of the 1.5 million Palestinians who live there.

But Israel, which blocked an aid shipment in May 2010 with a commando raid, says the latest trip is a provocation and that it will again stop the flotilla before it reaches the shores of Gaza.

The verbal battle between Israel and the flotilla participants has already begun.

Israel says it needs to maintain its sea blockade of Gaza to stop arms from being smuggled into the territory, which is controlled by the radical Islamic group Hamas.

Israel's military told reporters on Tuesday that activists from the flotilla were training to kill Israeli soldiers by using chemical agents.

"We understand very clearly after last year's flotilla that we are not talking about innocent or naive people here," said Israeli military spokeswoman Maj. Avital Leibovitch. "On the contrary, we are talking about organizations that have a radical doctrine. So we have a different issue here, which is a provocation, a flotilla — it's nothing about a humanitarian aid whatsoever."

The accusations set off an uproar in the Israeli media, with news organizations questioning the military's assessment of the threat. Even some government ministers expressed skepticism.

In Athens, the activists have also come out swinging.

They say Israel sent agents from its Mossad intelligence service to sabotage one of their vessels. At a press conference they showed damage to the propeller of one ship. The activists also say that the Israeli government is putting pressure on the Greeks to deny them permission to depart.

Activist Medea Benjamin, from Washington, D.C., is in Athens and is ready to head to Gaza.

"It's absolutely absurd," she said of the Israeli accusations. "If you knew and came and talked to us, you would see we are the most peace-loving people. We've dedicated our lives to peace; we do this work because we don't want to see killing of anybody."

She said Israel was "using every trick in the book — its propaganda machine, its economic clout, its political clout."

Israel imposed extremely tight restrictions on people and goods going in and out of Gaza after Hamas seized full control of the territory four years ago. Hamas is considered a terrorist organization by Israel and the West and has been responsible for suicide bombings and rocket attacks on Israel. 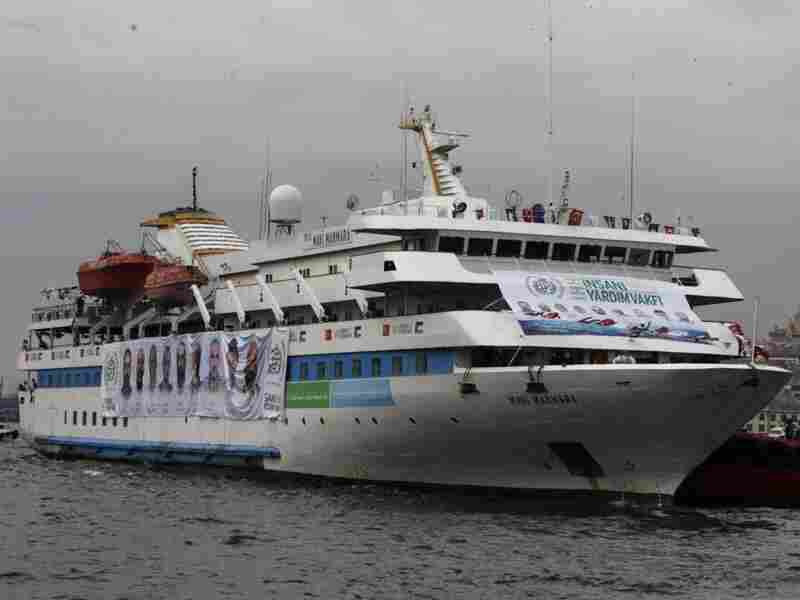 The Mavi Marmara ship was the lead boat in a flotilla headed to Gaza last year. Israeli naval commandos raided the ship in May 2010. Burhan Ozbilici/AP hide caption 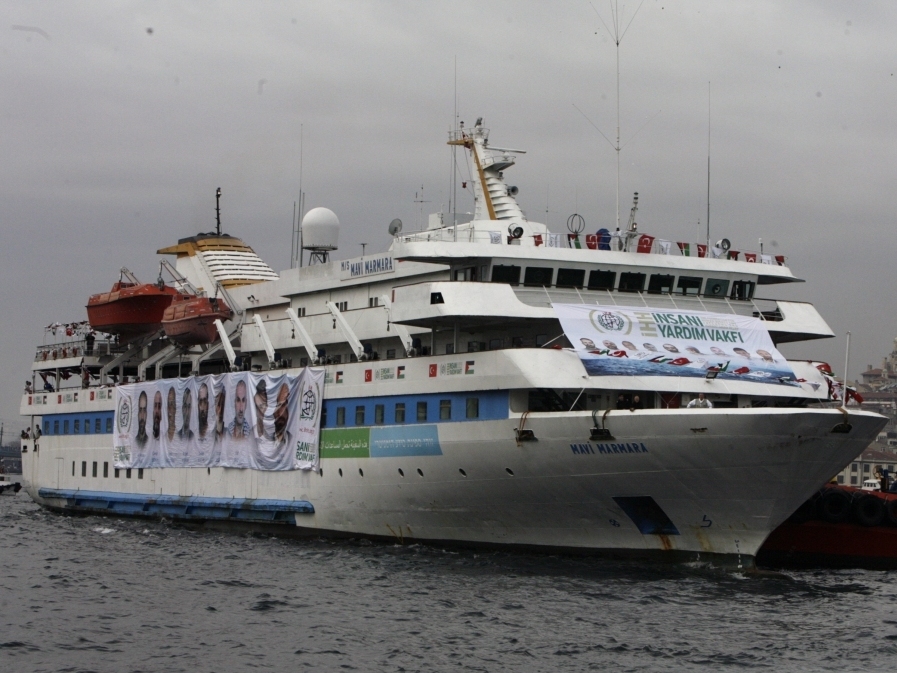 The Mavi Marmara ship was the lead boat in a flotilla headed to Gaza last year. Israeli naval commandos raided the ship in May 2010.

In May 2010, a Turkish flotilla tried to break the naval blockade of Gaza but was intercepted by Israeli commandos well off Gaza's coast. The clashes on the Mavi Marmara boat left nine activists dead and Israel facing international censure.

That condemnation prompted Israel to ease its blockade. For the past year, Israel has gradually allowed more commodities to enter Gaza. What that has meant for the people of Gaza is the subject of debate.

Israel now contends that there are no shortages in Gaza. The Israeli military chief of staff said this week, "There is no poverty on the streets of Gaza — they have fancy cars and import televisions and LCD screens from Israel."

The members of the flotilla say the aid they are bringing is vital because of the dire conditions in the strip.

In one of Gaza City's main markets there is evidence of the easing of Israel's blockade. Israeli goods are sold in almost every shop, including televisions and a small number of cars that can be imported every week.

But Omar Shaban, an economist based in Gaza, says that's only a small part of the story.

"You need to know that Gaza used to import more than 7,000 items before the siege, now Israel [allows] 400 to 500 items, which is still 10 percent of what we need," Shaban says "Keeping in mind the growth of the population, the destruction that was caused by the Israeli war, there is a huge need."

And there is widespread unemployment. The fancy TVs and cars remain out of reach of the average Gaza resident. There is a shortage of medicines. Electricity runs for only eight hours a day, and travel outside Gaza is still restricted.

Gazans say the flotilla will not solve these problems, but it will draw attention to the many problems in the territory.

One market worker says that Gazans don't see the aid that's sent to them, adding that most of it is taken by Hamas or sold for profit in the markets. Another adds, "it's obviously not enough to really help us here in Gaza. It's a political statement."

But he says, the flotilla is proof that the world has not forgotten about Gaza.