Accessibility links
At 75, 'Gone With The Wind' Marks Yet 'Another Day' As a little girl, novelist Margaret Mitchell sat on the front porch of her Georgia home, listening to adults tell stories of the Civil War. Mitchell's famous novel of the Old South was published 75 years ago this month; NPR's Kathy Lohr visits "the closest thing to Tara," just south of Atlanta. 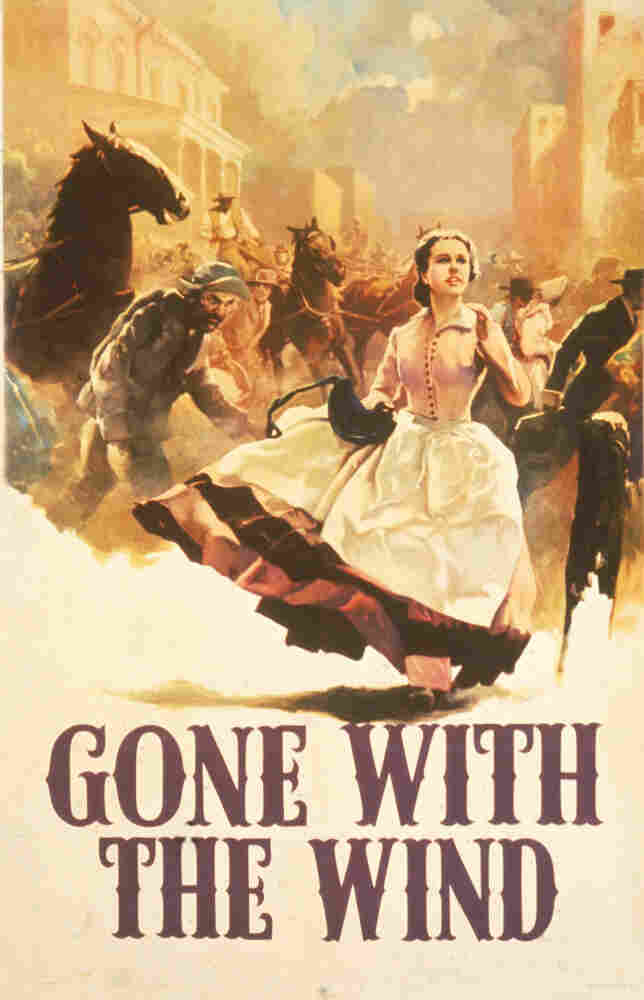 Margaret Mitchell's novel Gone with the Wind was published 75 years ago this month. A 1936 promotional poster for the book shows heroine Scarlett O'Hara running through the streets as Atlanta burns. Hulton Archive/Getty Images hide caption 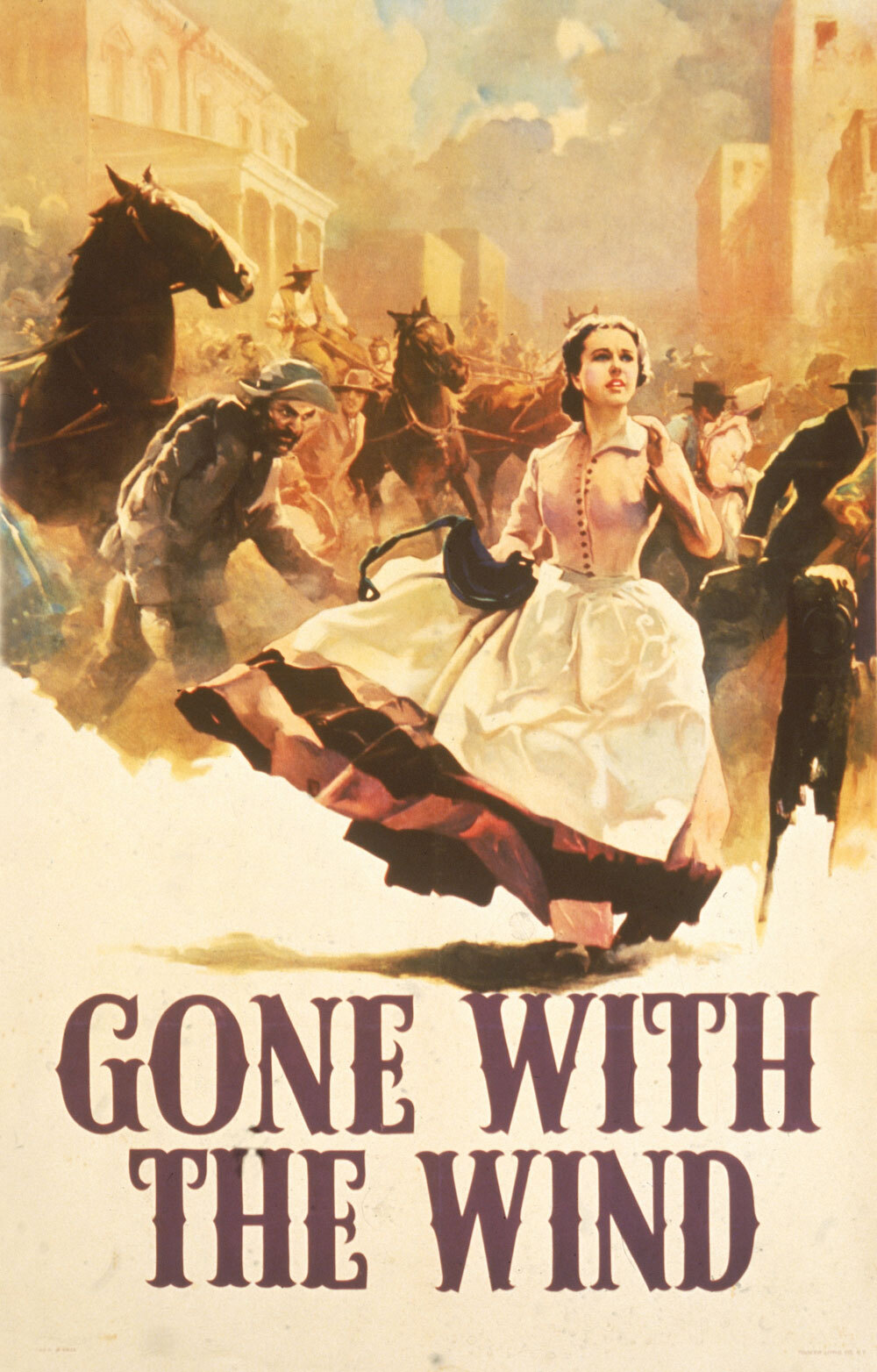 Margaret Mitchell's novel Gone with the Wind was published 75 years ago this month. A 1936 promotional poster for the book shows heroine Scarlett O'Hara running through the streets as Atlanta burns.

As a child growing up just south of Atlanta, Margaret Mitchell used to sit on the front porch, listening to adults tell stories about the Civil War as they passed still summer nights in Clayton County. Those stories went on to help inspire one of the most famous novels of all time — Gone with the Wind, which was published 75 years ago this month.

Mitchell "used to pretend that she was asleep," says Peter Bonner, who runs a tour company in the area. "[She would] lay there on the porch and stick around and hear some of those great stories. Later, she said, 'I sat on the fat slippery laps of my great-aunts and heard what would become Gone with the Wind.' "

Bonner says he's found stories of a real slave named Prissy and even the tale of making a dress out of green velvet drapes. Those accounts, found in Mitchell's letters, are at least in part stories about the author's great-grandparents, the Fitzgeralds, who were among the richest planters in Clayton County. Mitchell was quoted as saying Tara was in fact her grandparents' two-story country home. But tourists are always expecting something grander.

So when visitors ask to see the Tara depicted in the movie, they're sent to Jonesboro, Ga., about 10 miles south of Atlanta, where a plantation house called Stately Oaks was moved and preserved as an example of an antebellum home. Tall oaks surround the 1839 Greek Revival style house with grand porches and white pillars.

"Margaret took the Hollywood bigwigs on a tour here," Bonner says. "[She] showed them everything from little bitty farm houses [to] shacks to [Stately Oaks]. A lot of folks come here and see the two-gallery porches and the columns and they say, 'Oh my goodness. That's Tara.' " 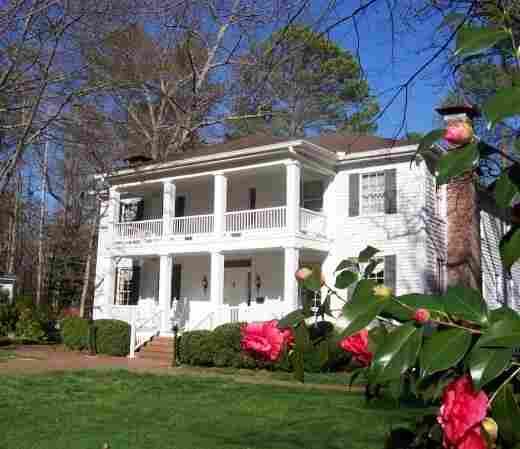 The Stately Oaks plantation house in Jonesboro, Ga., was preserved as an example of an antebellum home. It's about as close as you can get to the movie version of Tara; Mitchell based the novel's Tara on her grandparents' country home. Historical Jonesboro/Clayton County hide caption 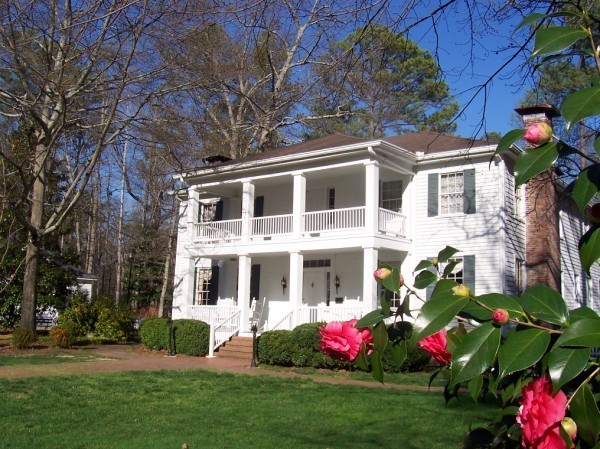 The Stately Oaks plantation house in Jonesboro, Ga., was preserved as an example of an antebellum home. It's about as close as you can get to the movie version of Tara; Mitchell based the novel's Tara on her grandparents' country home.

The movie version of Tara doesn't really exist, but Bonner says this is perhaps the closest thing to it.

"Instead of making people feel bad, [saying] 'Oh you're so silly, it didn't really happen,' we say, 'No. That is Hollywood's version. Let us take you back and give you a little taste of it: the foundation ... of what Margaret Mitchell wrote that would later become the movie that everyone loves.' "

Of course, not everyone here loves the Pulitzer Prize-winning book, and the film's portrayal of slaves and plantation life remains controversial. Clayton County is now predominantly black and some residents say they're ambivalent about the link with the book and the movie.

Debbie Sanchez, who has lived in the county for more than 30 years, acknowledges that it's sometimes tough to be associated with the book. "It wasn't something positive for African-Americans," she says. "We didn't benefit."

Jonesboro resident Carol Stewart says the book surfaces anger about the history of the South and the rights that African-Americans were denied. "Most people just sort of ignore it because it is a little hurtful," Stewart says. "That's the sense I get from talking to ... people in the community. ... It's a bad part of the county's history. Except it's not really history, it was fiction."

More On 'Gone With The Wind'

Pat Conroy Marks 75 Years Of 'Gone With The Wind'

Coming to Grips with Scarlett Fever

Race, Gender Roles In 'Gone With The Wind'

Race, Gender Roles In 'Gone With The Wind'

But this area now relies on the romantic picture of the antebellum South to boost tourism. In downtown Jonesboro, 15,000 to 20,000 people visit the Road to Tara Museum each year. It's housed in the 1860s train depot and contains thousands of items related to Gone with the Wind — memorabilia from the movie including Scarlett O'Hara's pantalets, the Mitchell family china and original manuscripts.

"We have a variety of copies of Margaret Mitchell's book including some of the original books that were released," says Rebekah Cline of the Clayton County Convention and Visitors Bureau, which runs the museum. "And we do have one edition that actually has Margaret Mitchell's signature, and that can be valued for as much as $25,000 today."

There's no official estimate of how much money the area's association with the book generates, but Charles Wright, who has lived here for 35 years, says it's been a good thing in an area hit hard by the recession.

"I think it ... helps put Jonesboro on the map," Wright says. "Without Gone with the Wind, a lot of people probably wouldn't have heard of it."

Gone with the Wind may be remembered as an epic love affair, an account of Civil War violence, or a story about the struggle to endure. In a 1936 interview, Mitchell herself said the novel's theme is survival — "I wrote about people who had gumption," she said, "and people who didn't."