Accessibility links
Facebook's Newest Challenger: Google Plus The site allows users to organize their online lives into "circles," which lets them keep photos and other information private from certain friends. The company is also promising to let users delete information from its servers, something Facebook has never done.

Google is trying once again to challenge Facebook's domination of the social-networking business, this time with a service called Google Plus. But you're not allowed to join it — at least, not yet. 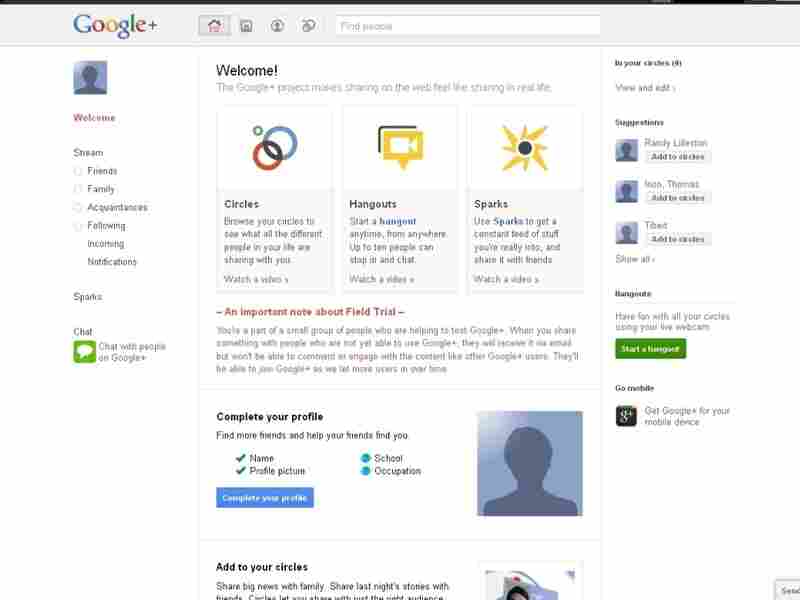 A screen shot of Google Plus.   hide caption

Horowitz says Google Plus is still in "field-testing," so invitations have been sent only to a limited number of early adopters and journalists. It's similar to the roll-out strategy for Gmail and Google Voice. And if the company is lucky, the perceived scarcity will build up demand — but for what exactly?

In other words, Google Plus is trying to solve the age-old problem of what to do when you're friended by your mom. In a promotional video, Google promises that organizing your online life into circles may actually help you to loosen up.

Facebook allows users to do something similar, with an option called "groups." But some users complain the feature is clumsy to manage.

Google Plus, on the other hand, puts circles up front. Whenever you upload a photo or a bit of news, Google checks whom you intend to see it.

Richard Esguerra, of the Electronic Frontier Foundation, says the company seems to be trying to recover from privacy controversies involving its earlier social-networking efforts, like the ill-fated Google Buzz.

"They're trying to fix a lot of different things about their own approach to social networking and privacy," he says. "And also about the general social-networking model, and for now I think we're seeing a good start."

Google is also promising to let you move your information out of Google Plus, if you decide to, and the company says it will let you delete your information from its servers — a promise Facebook has never made.