Accessibility links
In Afghanistan, Fighting Shifts To Mountainous East As the fight in southern Afghanistan winds down, the toughest challenge for U.S. and Afghan forces is in the east — an area one captain likens to the American West in the 1800s. There, they are battling a Taliban offshoot called the Haqqani network.

The American-led fight in Afghanistan is changing. The toughest fighting is shifting from the south — Helmand and Kandahar provinces — to the east. There, high, craggy mountains offer shelter to Taliban fighters.

And it's one group of fighters in particular that American and Afghan forces are battling: a branch of the Taliban known as the Haqqani network.

A 'Cavalry Fight' In Hostile Country

Capt. Jerry Lee Wood grinds his Toyota truck up the steep dirt incline at Combat Outpost Wilderness in Paktia province. He points to a dusty track off the road that curves up through the scrub brush.

"You see that little goat trail there?" he says. "The little faint trail ... off to the left? That's where I take my officers and we run up that."

There's a fairly large drop off the side of the road – around 1,000 feet. Wood's soldiers from Butcher Troop, part of the Army's 1st Infantry Division, live in a collection of wood huts hundreds of feet below. They're tucked into the side of a hill and surrounded by huge sandbags and ribbons of barbed wire.

This is very hostile country, just like those guys building the Pacific Railroad. ... What these guys would have been doing back in the 1800s, we're doing it now.

The mission here: to protect a key road and search for Taliban.

"This is the traditional cavalry fight," Wood says. "We are really on the forward edge of freedom out here. This is very hostile country, just like those guys building the Pacific Railroad. ... What these guys would have been doing back in the 1800s, we're doing it now."

And the hostile country is just across that roadway from his compound, in the dry mountains studded with small pine trees. It could be Nevada or Wyoming.

"You see this closer mountain here and then you see the far mountain on the backside?" Wood says. "Right in between the two mountains back there is the Haqqani homeland."

That's Jalaluddin Haqqani, the now-elderly rebel warrior who fought the Soviets with a lot of weapons from the CIA. In the 1990s, he sided with the Taliban and al-Qaida and was essentially the top power broker in this area. His hands were in everything from trucking to kidnapping.

Now, Haqqani's network of tribal and foreign fighters is run by his sons, and it's the biggest threat to the Americans in eastern Afghanistan.

"They shot artillery at us a couple of times before. And we pretty much returned fire with some heavy hands," Wood says.

A couple of times a week might be more accurate. His soldiers talk about "Rocket Sunday" and "Target Tuesday." And sure enough, on a Tuesday morning, the Haqqani network opens up fire again. 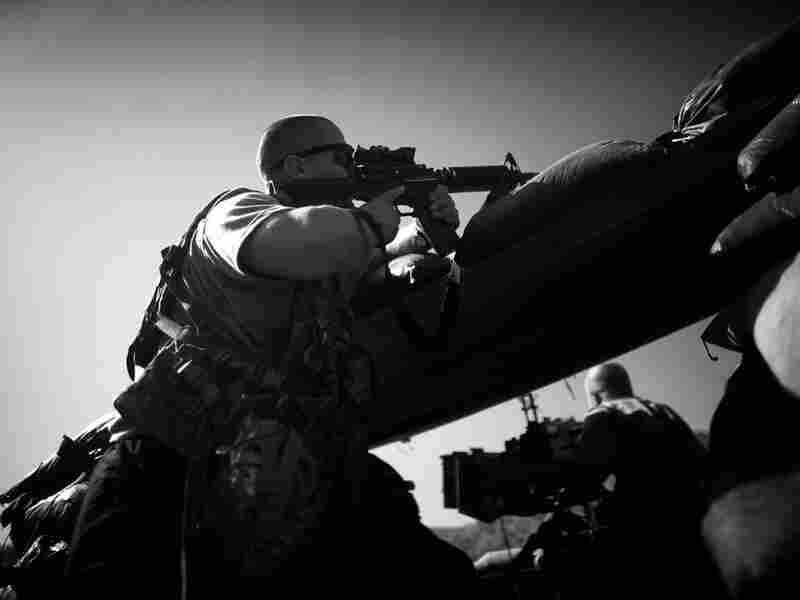 PFC Thomas Packer from Tama, Iowa, looks through the scope on his rifle as incoming mortar rounds hit just outside the bunker at Combat Outpost Wilderness in Paktia province. David Gilkey/NPR hide caption 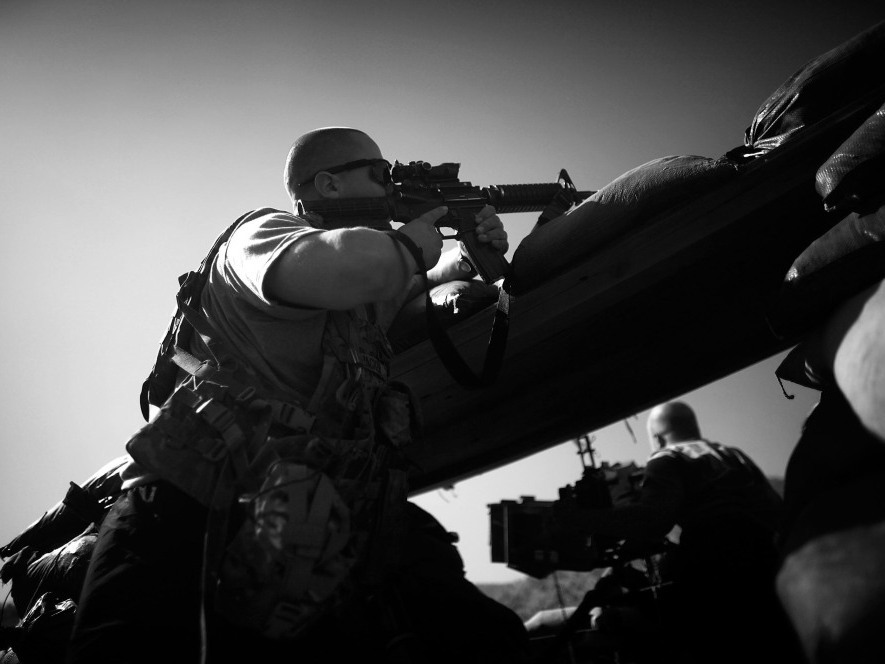 PFC Thomas Packer from Tama, Iowa, looks through the scope on his rifle as incoming mortar rounds hit just outside the bunker at Combat Outpost Wilderness in Paktia province.

A dozen mortar rounds slam into the camp, some within feet of sleeping troops.

American and Afghan soldiers scurry for cover. One Afghan soldier is seriously wounded. The soldiers from Butcher Troop fire back, hurling a barrage into the hillside.

In a half-hour, the shelling stops. A medevac helicopter takes away the wounded Afghan soldier.

In the midst of the chaos, an Afghan official arrives at the outpost for a scheduled meeting. He's hurried into the command center. His name is Niaz Muhammed Lali Zadran, and he's in charge of agriculture programs for the province.

He belongs to the same tribe as Haqqani — the Zadran, one of the area's largest. Many tribesmen support the Haqqani network. Niaz Muhammed says through a translator that he's not among them.

And a personal enemy of Niaz Muhammed himself. Slipping into his native Pashto, he says he knows he is an assassination target for the militants.

Soon, Apache helicopters sweep in over the mountainside, killing three of the insurgents who attacked the camp. Five others slipped away into the hills.

Those Apache helicopters are targeting Haqqani fighters every day. So is Col. Chris Toner, who is in charge of the thousands of American troops in the east, many of them spread out in combat outposts in three provinces.

Toner lifts off from Combat Outpost Wilderness in a Black Hawk helicopter and banks east. Before long he's hovering above a dry and hilly landscape that is the border between Afghanistan and Pakistan. It's the source of the colonel's greatest frustrations: Haqqani is in Pakistan. So close, but Toner can't reach him.

"The question I ask myself is, 'What's he doing across the border from me?' Because I can't affect that. And I don't know what he's doing," Toner says.

Weakening The Enemy In The East

What the Haqqani network is doing is training fighters from inside Pakistan — and sending suicide bombers, too.

Just recently, more than two dozen civilians were killed by a suicide truck bomber who struck a clinic in a neighboring province.

Back at his headquarters, Toner folds himself into a chair in his office. His walls are covered with large, detailed maps of his fight. 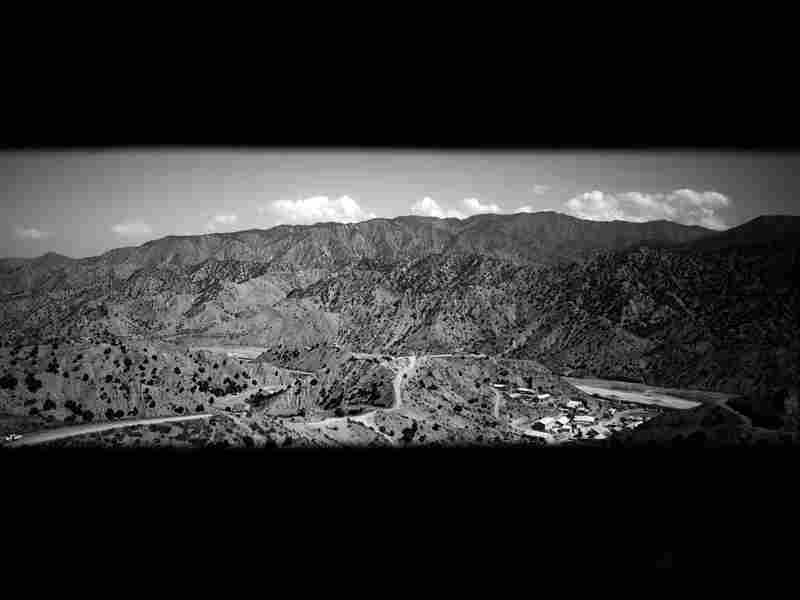 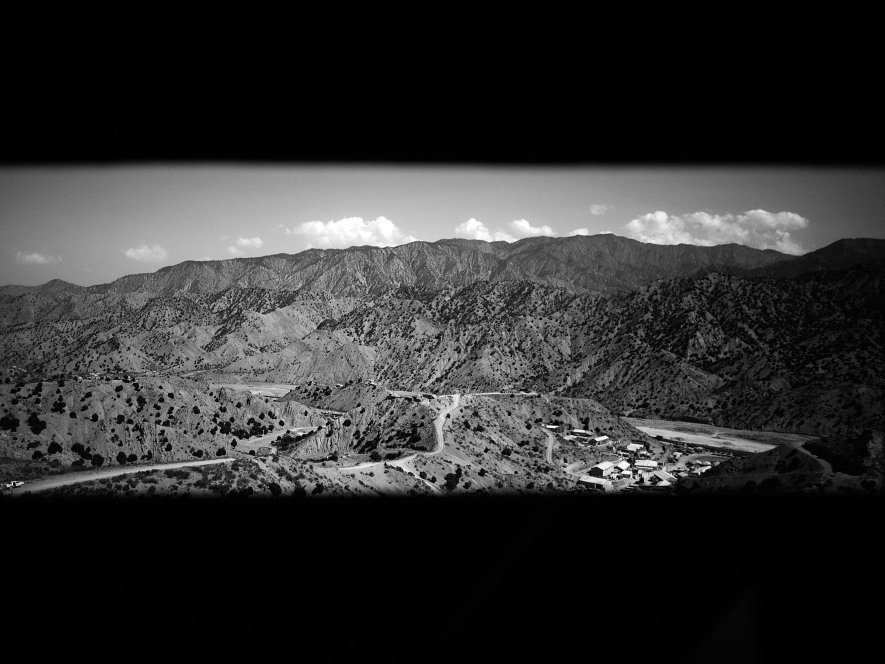 Col. Chris Toner flies over the Afghanistan-Pakistan border in his Black Hawk helicopter.

"I don't think anybody will debate that the most resilient enemy network out there is the Haqqani," he says.

But Haqqani's tactics — like that suicide bombing — are now alienating tribal elders. An increasing number of elders, Toner says, are breaking with Haqqani and willing to work with the Americans.

"They're really at the point in time where they're just tired of fighting, and they don't see a link between what Haqqani did during the mujahedeen days against the Soviets and what's he's trying to do now."

Toner says that with the so-called surge in American troops, he's been able to take the fight to Haqqani. American and Afghan forces are spreading out, capturing more caches of weapons and bomb-making equipment. U.S. special forces have killed or captured hundreds of Haqqani fighters and commanders in nighttime raids.

But hundreds, if not thousands, of Haqqani troops are still out there.

But senior officers say they still don't have enough troops to win. So more U.S. troops will be shifted to the east from southern Afghanistan starting next year, now that the fight around Kandahar and Helmand provinces is winding down.

Toner says the goal is to hammer the Haqqani network, either to kill its leaders or weaken them so much that they'll negotiate with the Afghan government.

"We've got to get the enemy force to the point in time that the Afghan National Security Forces can handle them with the capabilities that they enjoy right now. I think we're at that point right now, but I'm not advocating for leaving tomorrow, because what we have to do is, we still have to buy time and allow for the government to mature," Toner says.

A Meeting With Local Officials

Afghan officials like Gov. Abdul Jabbar Naeemi of Khost province say their government is maturing. He says he's working to provide services and reach out to tribal elders. And for that, the Haqqanis have made him their top assassination target in this area. 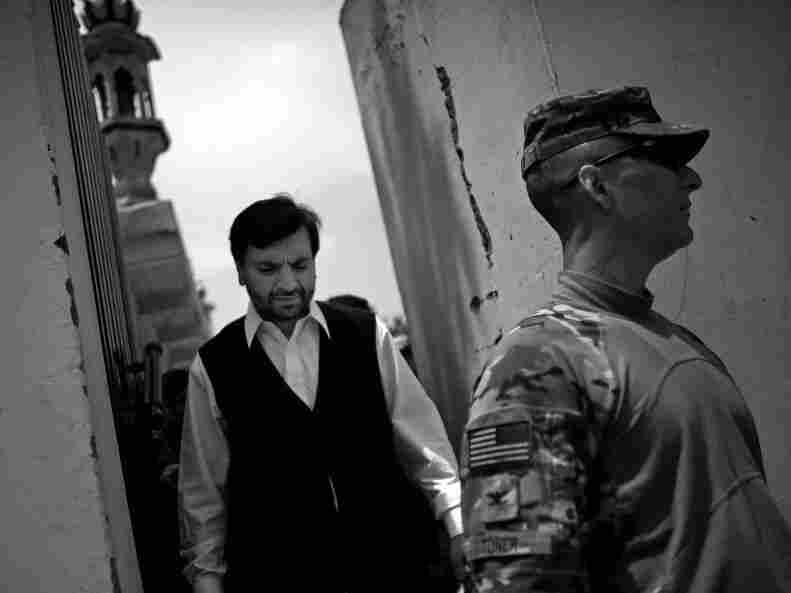 Governor Abdul Jabbar Naeemi walks through his compound with Col. Chris Toner after after a lunch and meetings in the governor's compound in the provincial capital. David Gilkey/NPR hide caption 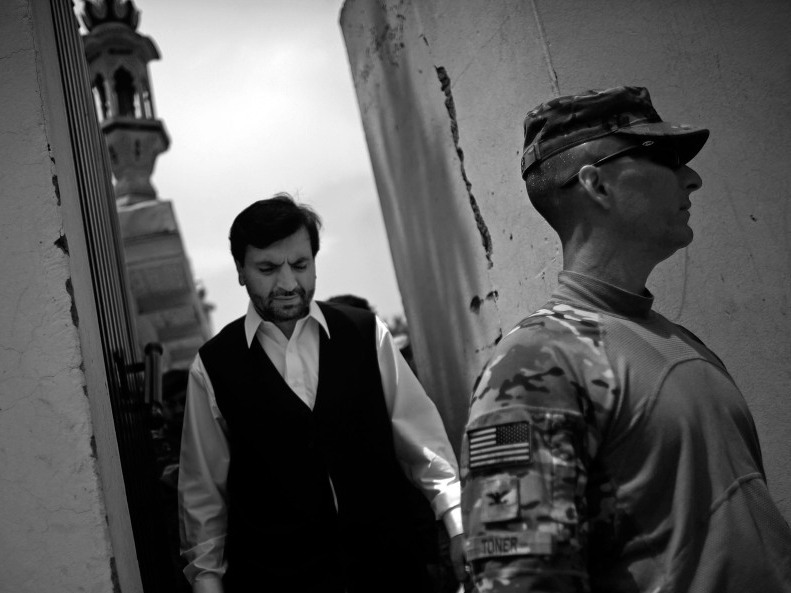 Governor Abdul Jabbar Naeemi walks through his compound with Col. Chris Toner after after a lunch and meetings in the governor's compound in the provincial capital.

Naeemi walks into his compound with Toner. There are wide lawns, flowers and fruit trees. A peacock strolls the grounds.

Local workers are building a high stone wall, meant to replace the American sandbags and razor wire that border the compound — one more effort to reflect a transition to Afghan authority.

Naeemi settles into a plush sofa in his sitting room. Nuts and fruits are set on the table. Over spiced milk chai, he talks about the way ahead. He says the insurgents must be stopped. He is pressed on whether negotiation is possible with Siraj Haqqani, the son of the legendary mujahedeen leader who now runs the network.

The enemy's trying to stop our achievements. But this is our commitment — we are trying to provide services to the people.

"Actually, if Siraj Haqqani is thinking [of joining] this process, he's most welcome," Naeemi says. "They should leave their arms, they should join this peace process and they should come up without any conditions to work for stability in this country."

Naeemi says it's up to Siraj if he will do that. The governor looks doubtful, as he fingers his amber prayer beads.

Sitting on a sofa nearby is a burly bald man, Col. Mohammed Nassir. He is a veteran of decades of fighting here, and leads a brigade of Afghan forces in the area. He's even more pessimistic.

The colonel says that some Haqqani fighters might be peeled away, but the leaders will continue to threaten the Afghan government.

Many American officers agree. They are striking Haqqani's safe haven in Pakistan with bombs from drone aircraft, hoping to get lucky and destroy the leadership.

And, by sending more American troops to this area of Afghanistan, and building up the Afghan forces, they hope they can one day end the Haqqani threat.