Accessibility links
Syria Permits Vigil For Slain Civilians, Soldiers Protesters in the capital, Damascus, staged a candlelight vigil Wednesday night to press for democratic changes. It was the first officially sanctioned protest in the capital, and it comes just days after the regime allowed opposition activists to meet at a Damascus hotel. 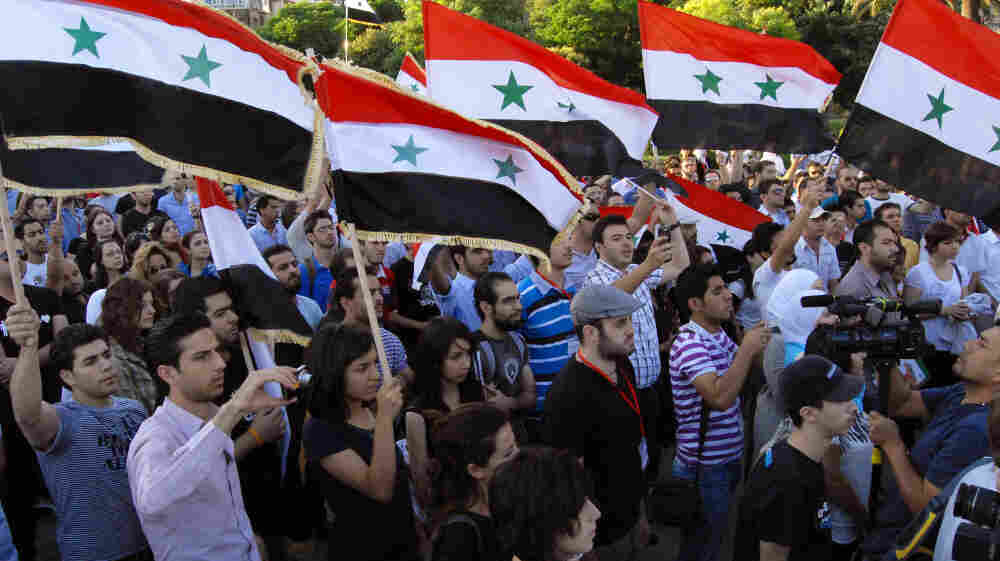 Syrians carry national flags during a candlelight vigil in honor of those who were killed in recent violence, in Damascus on Wednesday. It was the first officially sanctioned protest in the capital, and it comes just days after the regime allowed opposition activists to meet at a Damascus hotel. Muzaffar Salman/AP hide caption 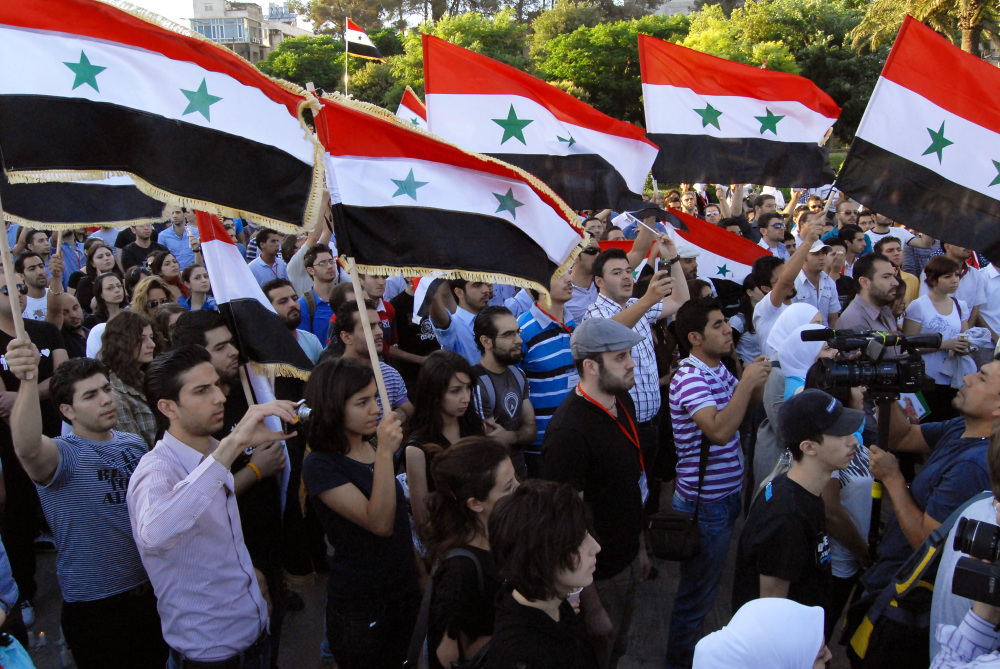 Syrians carry national flags during a candlelight vigil in honor of those who were killed in recent violence, in Damascus on Wednesday. It was the first officially sanctioned protest in the capital, and it comes just days after the regime allowed opposition activists to meet at a Damascus hotel.

The Syrian government gave another political concession, even as security personnel continued roundups in rebellious suburbs of the capital, Damascus. In the center of the city, a candlelight vigil, the first of its kind, had official permission.

Pro-government rallies take place daily, but this was a somber event, to honor Syrians who have died in four months of unrest — civilian and military. And members of this young crowd spoke their minds.

The invitation went out on Facebook. Official approval came after three rejections. There were rules: no politics, no slogans, no pictures — not even of the president. Two hours in a city park. Organizers were in charge of security, and they patted down everyone who entered.

This is a memorial for the dead, said Bishar Hamwey, one of the organizers. "We don't take sides here from the army and from the civilians," he said.

Syrian state television has covered the funerals of soldiers and police, but openly marking the death of those killed in protests is new, Hamwey said.

"It is new and we are welcoming this, and we hope it's a beginning for a new era of civil-rights history in Syria," he said.

The crowd was young and well-educated, the Facebook generation in person — college students, computer programmers and Web designers.

Nisreen and Asma, in their mid-20s, said they both studied IT. Giving only their first names, they said the killing must end — and the protests must go on "because the rights have not been met yet."

In this public park, they said they had never taken part in any protests.

But in whispered conversation, others said they are on the streets every night — in midnight rallies to keep the pressure up. The cat-and-mouse game they play with security police played out at the vigil, too, with plainclothes security snapping pictures of anyone who talked to the media.

When a pro-government group marched to the edge of the park, carrying pictures of the president, Aktham al-Hassanieh, a vigil organizer, rushed down to stop them. But the police stepped in to head off a confrontation. Hassanieh said the police action surprised him — "kind of."

For the second time in a week, the Syrian government surprised critics, approving meetings that would have been unthinkable a few months ago. Well-known dissidents were permitted to meet in a Damascus hotel Monday, and then came the silent vigil in a public park.

George al-Ain said he came here to honor the deaths that paid for the changes and "made Syrian people move to a new era." He said he's a Christian and that the notion that there are no Christians in the protest movement is false. "It's so untrue, this thing," he said.

The official narrative of the protest movement is that it represents a sectarian split — a mostly Sunni Muslim uprising against Syria's minorities, Christians and Alawite Muslims. Much of the violence, government officials say, is due to clashes with armed gangs. But these young people have a different explanation for the deaths of more than 1,000 peaceful protesters, said 20-year-old Batuol Nayouf, a political science major.

"We both know who killed them, and we both know that they died for something," Nayouf said. "Everything, you have to pay for it — you don't get anything for free, especially in these countries."

Government troops have pulled out of some provincial cities, but security personnel have tightened a grip on the capital as another Friday — a protest day — approaches.