Going With The Flow: Handel's 'Semele'

Going With The Flow: Handel's 'Semele'

Hear An Introduction To 'Semele' 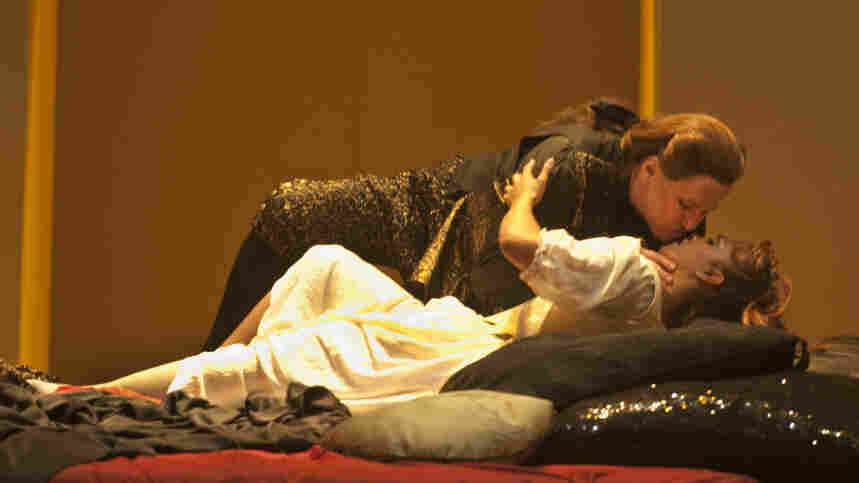 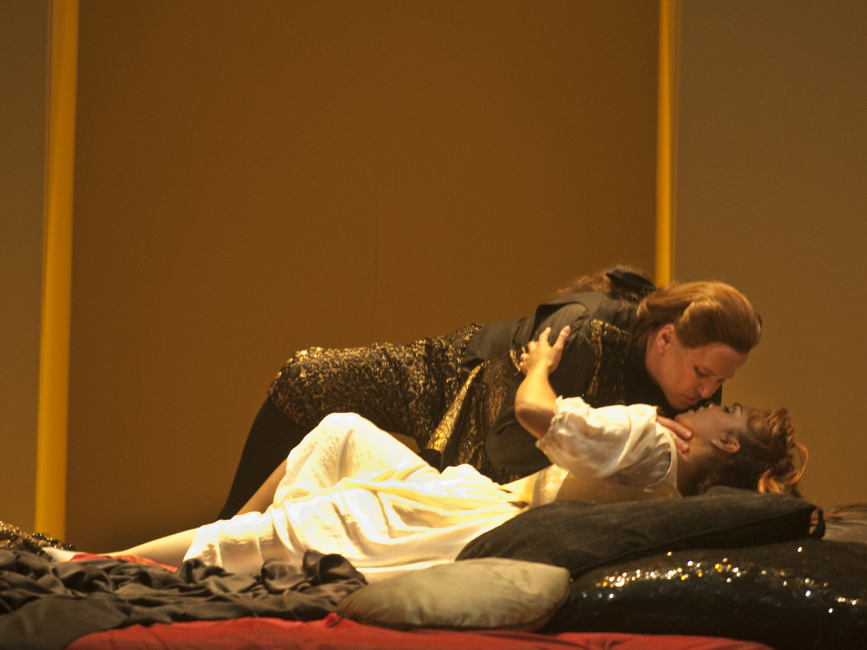 In 1977, when the Bee Gees wrote their hit song "Stayin' Alive," that's very much what the band itself was doing — and it gave the group something in common with a composer who was faced with flagging popularity more than 200 years earlier: George Frideric Handel.

The Bee Gees were one of most successful bands of the late 1960s and early '70s, with hits including "I've Gotta Get a Message to You," "Words" and 1971's "How Can You Mend a Broken Heart," their first number one song in the U.S.

Then, in the mid '70s, the popularity of soft rock began yielding to the soaring disco craze, and the Bee Gees seemed dead in the water. But after a couple of down years, the band emerged with a new, disco-ready image. With their music for the 1977 movie hit Saturday Night Fever, the Bee Gees were back on top; the film launched three number one songs, including "Stayin' Alive."

In an Act Three aria filled with nonstop, rapid-fire coloratura, Semele (soprano Danielle de Niese) tells Jupiter that she'll accept his love only if he comes to her in his true form. She sings, "No, no, I'll take no less than all in full excess!"

Back in the 1720s and early '30s, Handel had become a musical star by exploiting the runaway popularity of Italian opera in the theaters of London. He composed a long list of hit operas, all using much the same formula: strings of brilliant arias for the world's most acrobatic singers.

Semele's downfall begins in Act Two, when Juno (mezzo-soprano Vivica Genaux) plots with Iris to visit the sleep god, Somnus, for help. She makes her plans in the furious aria "Hence, Iris, hence away, far from the realms of the day!"

But, like soft rock in the 1970s, the appeal of Italian opera in London didn't last forever. In its place, a taste for English oratorios emerged. Unlike Italian operas, the oratorios were written in their audience's own language and often had inspiring, spiritual themes in contrast to opera's overt passion and violent intrigue. Handel took full advantage of the trend. The apex of this new phase in his career came in 1742 with Messiah, arguably the most popular oratorio of all time. Still, opera had hardly died out, and in 1744 Handel came up with Semele, a fascinating drama seemingly aimed at both markets.

Whether Semele is an opera or an oratorio is a question that's pretty much up for grabs. Handel said it should be performed "in the manner of an oratorio," which might suggest that he didn't think it really was an oratorio. And the score features some decidedly operatic elements — a host of spectacular arias and a sassy story that's hardly spiritual. Yet it's written in English, and also leans heavily on big choral numbers, a staple of the oratorio style.

As it turned out Handel may have been overly ambitious; it seems his audiences didn't know quite what to make of the piece. The oratorio crowd was expecting something uplifting, like Messiah, and the lustful characters of Semele hardly fit that bill. Opera lovers seemed to think it was somehow impure — for one thing, opera was supposed to be in Italian, not English, even in London. And what about all those choruses? Crowd scenes were a rarity in opera houses of the era.

Today, those problems have faded. Audiences have long since grown accustomed to everything from bold sensuality to subtle spiritualism, and from intimate arias to outlandish, musical excess. So by now, Handel's hybrid drama works perfectly well both in the theater and in the concert hall.

On World of Opera, host Lisa Simeone presents Semele from one of the world's great dramatic venues, the Champs-Elysées Theatre in Paris. The production, sung in the original English, stars the glamorous young soprano Danielle de Niese in the title role, with tenor Richard Croft as the lecherous god Jupiter and mezzo-soprano Vivica Genaux as Jupiter's jealous wife, Juno.

The Story Of 'Semele'

Handel's drama has three acts and is set in the world of Roman mythology. The title character is a princess, daughter of Cadmus, the King of Thebes. She's engaged to marry Athamas, a prince from another kingdom.

But Semele doesn't actually love Athamas, and the guy she is in love with isn't really a guy at all. He's Jupiter, king of the gods. He visits her in human form, and the two have a torrid affair going. 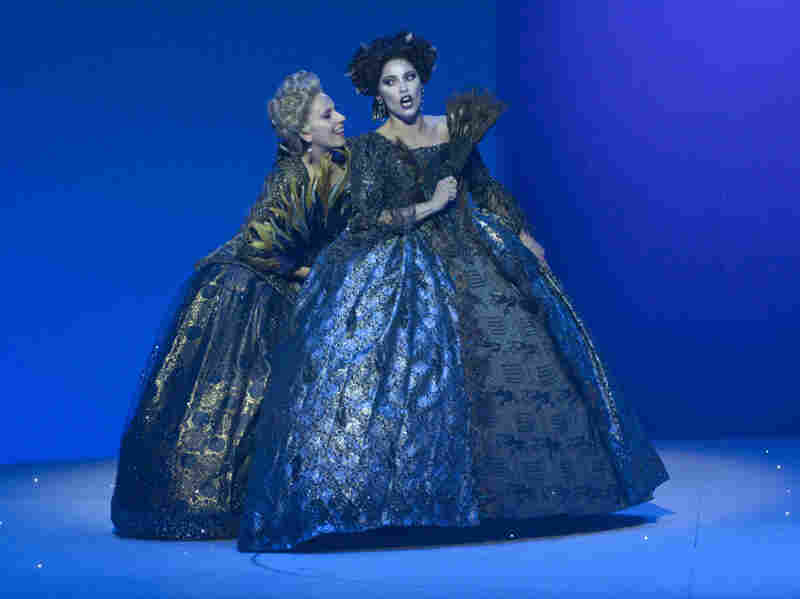 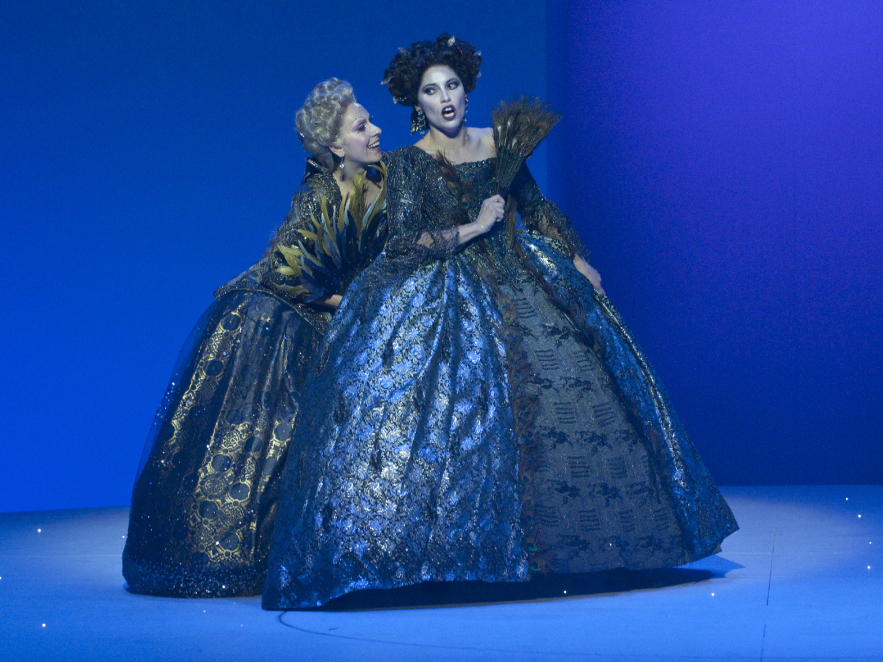 As ACT ONE opens, Semele's wedding to Athamas is about to begin, but Semele is stalling. So is her sister, Ino, who is in love with Athamas. While various delaying tactics are going on, Semele hopes that Jupiter will bail her out, and he does. There's a fearsome clap of thunder, and the sacred flames at the altar die out. Then the altar itself suddenly disappears. Terrified, everyone runs away. With the wedding on hold, Ino tells Athamas that she loves him — but he's a bit dense, and doesn't get the message.

Cadmus then reports that Jupiter has taken the form of an eagle, and swept Semele off to a godly palace — leaving nothing behind but "a celestial odour, and ambrosial dew." As the act ends, Semele sings joyfully about herself, saying, "Endless pleasure, endless love, Semele enjoys above."

As ACT TWO begins, Jupiter's wife, the goddess Juno, hears about all this from Iris, her messenger. Juno is not happy, and begins to make careful plans. She'll call on Somnus, the god of sleep, to help her sneak into the palace and deal with Semele.

For her part, Semele is already having issues with life in the palace. She's been restless at night, and she's uncomfortable as the only human woman in a world of gods, nymphs and zephyrs.

Jupiter comes to her in human form, and Semele greets him passionately. But he senses she's not happy, and thinks a bit of human company might help. So he sends for Ino. Jupiter then transforms the scene to a beautiful, Arcadian landscape, and the sisters rejoice in their pastoral surroundings.

To begin ACT THREE, Juno makes her move to break up Jupiter's romance at Semele's expense. Juno goes to Somnus, who's resting in his remote cave. At first, she and Iris have trouble waking Somnus up — he is the god of sleep, after all.

Finally, when Juno promises him a beautiful nymph as his reward, Somnus rouses himself and agrees to her plan. First, he'll charm the palace guards so Juno can sneak in. He'll also put Ino to sleep, allowing Juno to talk with Semele while disguised as Ino. And while Jupiter is sleeping, Somnus will give him a dream, causing Jupiter to desire Semele so passionately that he'll agree to whatever she wants.

In the palace, Semele is surrounded by luxury, but she's not content. She wants to love Jupiter as he really is, as a god, not just in his human form. Juno, in her Ino disguise, shows Semele what that might be like. She produces a magic mirror. When Semele looks into it, she sees herself reflected as a beautiful goddess. Then, still pretending to be Ino, Juno says that Semele should refuse to make love to Jupiter unless he comes to her in his godly form, as "the Mighty Thunderer."

After Juno leaves, Jupiter shows up, and he's more than ready for a little hanky-panky. When Semele won't cooperate, he does what his dream suggested, and promises to grant her any demand. When he hears what she wants, he regrets his promise. He knows that if he comes to her in his real form, in a storm of thunder and lightening, she'll be destroyed. But a deal is a deal. Jupiter rises into the heavens, and descends on Semele in a fiery cloud. Semele knows that she's made a mistake, but it's too late; she's engulfed in his flames, and dies — while Juno watches in triumph.

In the final scene, Ino is back home in Thebes. Her father Cadmus has seen Semele's death as a violent storm. Ino tells him what happened, and also reports an order from Juno — that Ino should marry Athamas. Cadmus agrees.

The god Apollo then appears, and announces Semele's true fate: Bacchus, the god of wine and ecstasy, will rise from her ashes. And as pure pleasure had always been Semele's true desire, everyone celebrates a joyful outcome.