Accessibility links
New Rules On Medical Residents' Hours Spur Debate New rules going into effect July 1 will limit first-year medical residents to 16-hour shifts in the hopes of reducing the number of errors made by fatigued interns. But some say residents gain invaluable experience through longer hours and managing the fatigue that inevitably comes with practicing medicine. 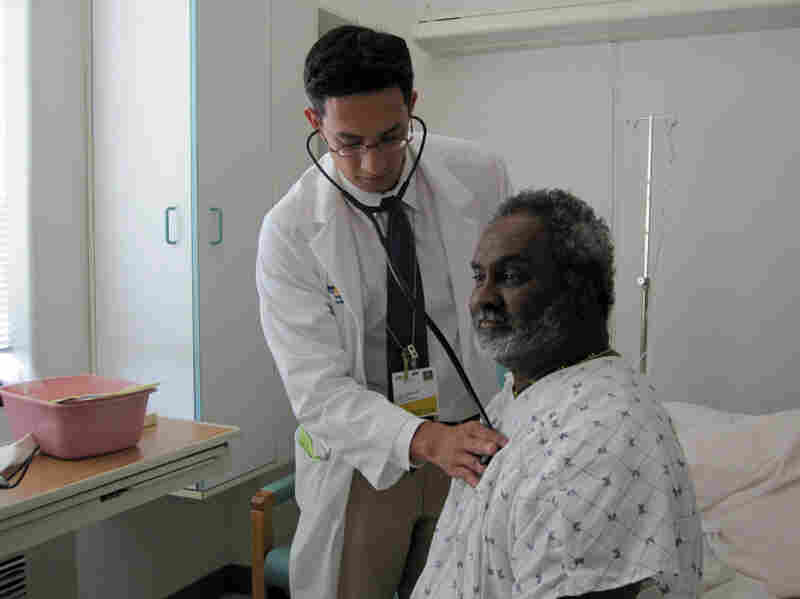 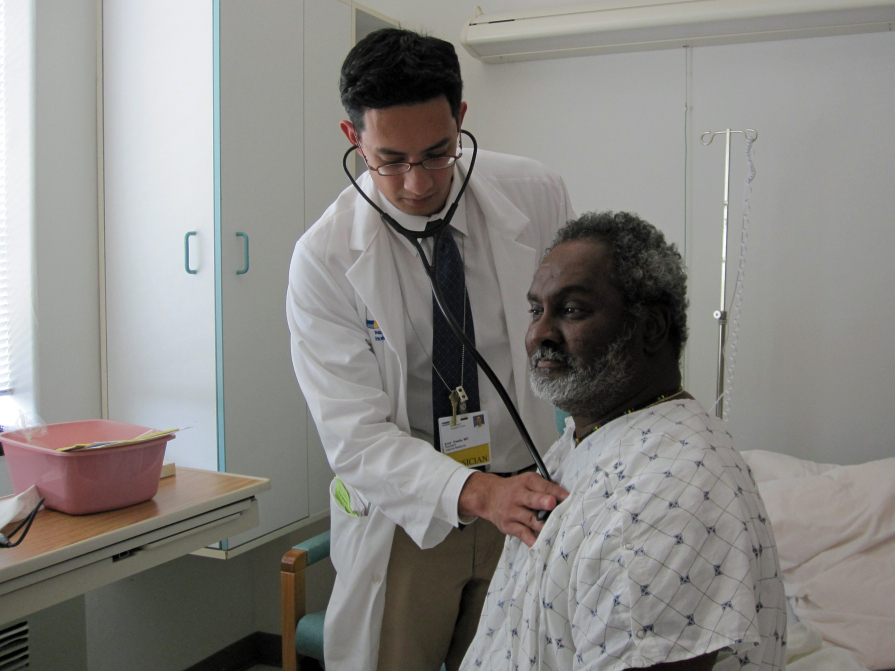 Dr. Emil Oweis is ready for anything Washington Hospital Center throws at him. One year out of medical school, the tall 26-year-old internal-medicine resident often works up to 30 hours at a time. He sees it as a necessary part of his training.

"You're definitely going to be tired," Oweis acknowledges, but with coffee and occasional showers, he remains "alive and functional."

Patient safety advocates aren't so sure. On Friday, a new set of rules goes into effect, limiting first-year residents, also called interns, to 16-hour shifts. The rules, put in place by the private nonprofit Accreditation Council for Graduate Medical Education, are intended to prevent medical errors resulting from sleep deprivation. Second- and third-year residents will still be permitted to work 28 hours at a time. But in the last four hours, they can't take on new patients.

Debate has been raging for years over this issue — and the new rules haven't ended it. Supporters of long shifts say residents gain invaluable experience through longer hours and managing the fatigue that inevitably comes with practicing medicine. They say patients are protected because residents, who make up almost a quarter of physicians working in hospitals, are closely supervised.

Critics, however, cite research showing that doctors become so tired during long shifts that their performance deteriorates. They are no different in that respect from workers in other industries, according to decades of studies linking exhaustion to accidents and errors.

If patients had a vote, they'd cast it in favor of well-rested doctors. In 2009, a poll of 1,200 American households published in the journal BMC Medicine found that 81 percent of respondents thought patients should be informed if their doctor has been working for more than 24 hours. Eighty percent said they would then want a different doctor.

There's very little evidence that more hours are better, and there's a lot of evidence that it's harmful to patients and residents.

This is the second time in the past eight years that ACGME, the accreditation group, has changed the rules for residents. In 2003, the group limited residents to 80 hours per week, but permitted them to work 30 hours at a stretch.

Then, in 2007, Congress asked the Institute of Medicine to investigate the scientific evidence that physician fatigue was leading to an increase in medical errors. The IOM report, released in December 2008, recommended new regulation of resident duty hours, supervision and training. The accreditation group issued its rules last September based on the report and a year of its own investigation. But that didn't end the discussion. An article published in the most recent edition of the journal Nature and Science of Sleep argues that the rules fall short of the IOM recommendations.

"There's very little evidence that more hours are better, and there's a lot of evidence that it's harmful to patients and residents," says Dr. Lucian Leape, a professor of health policy at the Harvard School of Public Health and one of the authors of the study. All resident shifts, he says, should be limited to 12 hours.

"One of the most disturbing things" about the new rules, he says, is that the new shift limit of 16 hours applies only to first-year residents.

"This is not based on science. The evidence is clear that you don't learn to handle sleep deprivation," he says. "It's ill-conceived."

Leape also points to studies suggesting that tired residents are more likely to injure themselves while caring for a patient or driving home from work. He argues that it's time for the Occupational Safety and Health Administration, the federal agency in charge of worker safety, "to step in and enforce humane working hours for the medical profession as they do for other professions." OSHA is considering a similar request made by Public Citizen, a consumer advocacy group and others.

The Case For Longer Hours

But Dr. Thomas Nasca, CEO of the accreditation group, says maintaining long shifts is crucial for training residents to practice medicine. While limiting shifts for the youngest residents was important to ease them into the profession, he says, older residents must be taught to "recognize and manage fatigue" they will encounter regularly in their actual clinical practice, where hours are not regulated.

"The best way to teach them that is under supervision so that the patients continue to receive outstanding care," he says.

It's also important for patients, Nasca says, whose care often does not fit into 16-hour episodes. For example, a difficult labor and delivery might last much longer. "You may have complications," he says. "Who is better to take care of you during the final phases of the labor than the physician who's been caring for you all the way through?"

Nasca argues that the evidence linking long duty hours and patient safety is mixed. He points to a 2009 study of Medicare and Veterans Affairs patient data published in the Journal of General Internal Medicine, which found no change in mortality after the 2003 limit of 80 hours per week for residents was implemented.

Several provider groups have criticized the accreditation organization's most recent change, including the American Academy of Family Physicians. Dr. Roland Goertz, its president, says his primary concern is the "intentional creation of necessary handoffs of care" that come along with shortened shifts and could increase the risk of errors that injure patients. Handoffs, in which one doctor must transfer information about a patient to the next physician on duty, increase the risk of mistakes.

Goertz, who runs a medical clinic in Waco, Texas, that trains 36 residents at a time, says shorter shifts can also have an adverse effect on hospitals. Faculty may have to take on more work that residents were previously doing, which can be expensive. Putting the new duty hours into effect will cost hospitals and clinics nearly $250 million in the first year, according to an analysis by UCLA.

Oweis, at Washington Hospital Center, is glad the new restriction on hours won't affect him. He's exempt because on Friday he begins his second year of residency. "I would say I'm one of a lot of people who are opposed to it," he says. Despite the pain of the long hours, he says, "you do learn."