Accessibility links
Weekly Standard: Violent Games Are No Fairy Tale The Supreme Court ruled on Monday that violent video games can be sold to children because they are essentially a modern version of Grimm's Fairy Tales. However, Jeffrey H. Anderson of The Weekly Standard doesn't remembering seeing Snow White Disembowel anyone. 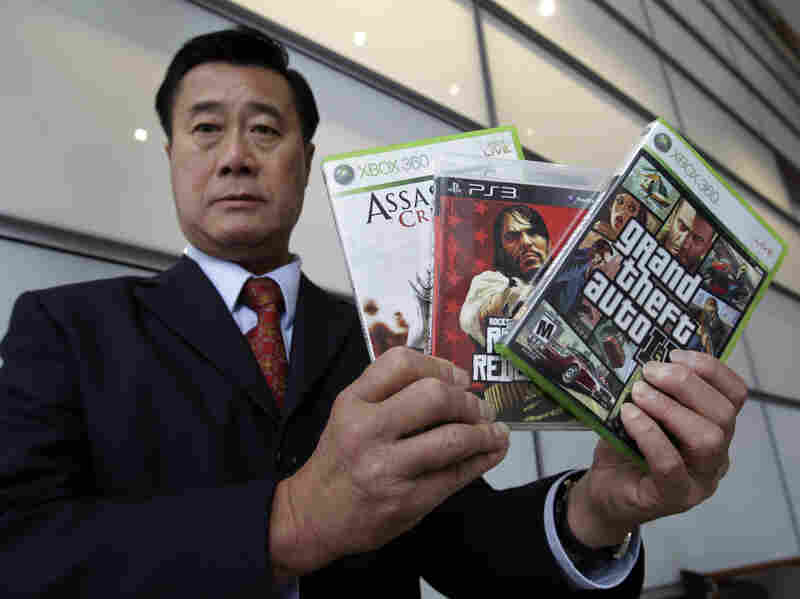 Calif. State Sen. Leland Yee, D-San Francisco, holds up three video games after a news conference in San Francisco, Monday. The Supreme Court ruled that it is unconstitutional to bar children from buying violent video games, saying government doesn't have the authority to "restrict the ideas to which children may be exposed" despite complaints. Paul Sakuma/AP hide caption 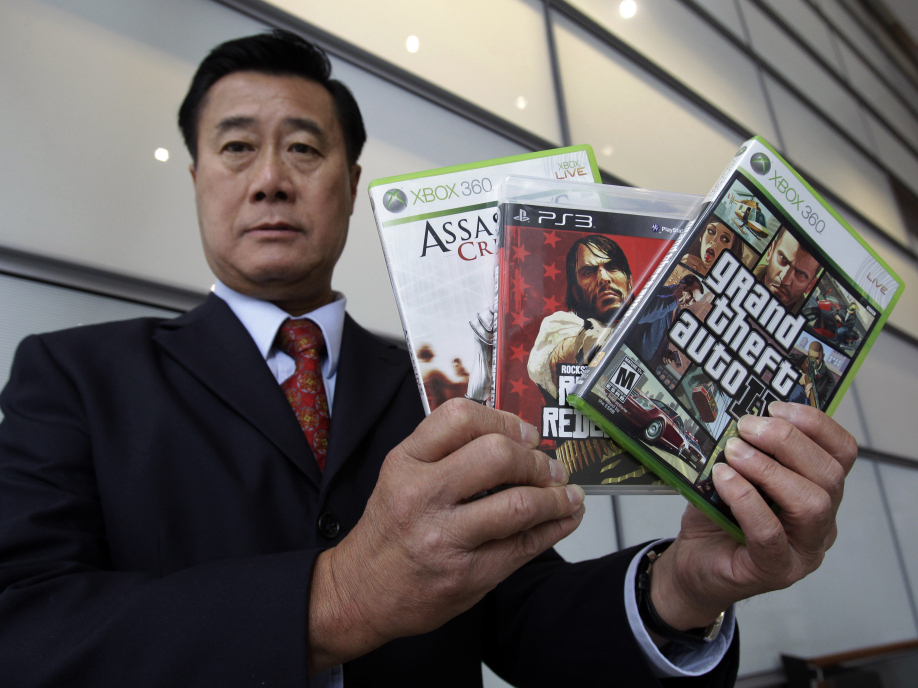 Calif. State Sen. Leland Yee, D-San Francisco, holds up three video games after a news conference in San Francisco, Monday. The Supreme Court ruled that it is unconstitutional to bar children from buying violent video games, saying government doesn't have the authority to "restrict the ideas to which children may be exposed" despite complaints.

Jeffrey H. Anderson was the senior speechwriter for Secretary Mike Leavitt at the Department of Health and Human Services.

On Monday, in the case of Brown v. Entertainment Merchants Association, the Supreme Court struck down a California law prohibiting the sale of violent video games to children. In a 7-2 holding authored by Justice Antonin Scalia (with Justices Alito and Roberts concurring and Justices Thomas and Breyer dissenting), the Court ruled that video games enjoy essentially the same constitutional protection as books, with violent video games being, in Scalia's estimation, much like modern day Grimm's Fairy Tales.

Read Another View On Recent Supreme Court Decisions from The New Republic.

Of course, there is very little similarity between reading (or, for that matter, watching film adaptations of) Snow White or Cinderella and deciding whether to murder, disembowel, or rape one's victim in a video game (all of which, as Justice Alito details, are features of some of these games). That the Court's majority fails to see this distinction shows how inapt it is to have that body engage in such line-drawing for an entire republic. Further demonstrating this, Scalia also compares such video games to The Odyssey, and he somewhat mystifyingly declares that literature and video games are similarly "interactive."

In his opinion, Scalia expresses support for Court precedent, saying that states can lawfully prevent sexually explicit material from being sold to children, while at the same time maintaining that states cannot ban games that (among other things) involve having children play the role of sexual predator. The former, according to Scalia's moral compass, is "obscene," while the latter is not. Needless to say, this distinction is not found in the Constitution.

In dissent, Justice Breyer asks, "But what sense does it make to forbid selling to a 13-year-old boy a magazine with an image of a nude woman, while protecting a sale to that 13-year-old of an interactive video game in which he actively, but virtually, binds and gags the woman, then tortures and kills her?"

Constitutionally, this case hinges on the First Amendment's protections of freedom of speech and of the press. When contemplating video games, few people likely think of the terms "speech" or "the press" — and for good reason. Most video games are not, at least principally, a form of either. Sure, they may involve or include some degree of speech, but if everything that involved or included speech were categorized as enjoying First Amendment protections, then nearly everything that is currently illegal would thereby become legal.

The Constitution wisely carves out protections for the spoken and written word, the two principal forms of language and communication — particularly of political communication. Beyond that, it offers no express guarantee of freedom of expression. Such a guarantee would necessarily have to be qualified, as few would tolerate expression in the forms of, say, flying a plane into the World Trade Center, painting graffiti on a public monument, or even urinating on a public building.

Justice Scalia's response — much like when he signed onto Justice Brennan's 5-4 opinion in the flag burning case of Texas v. Johnson — is that essentially the only real harm is physical harm, and therefore almost no expression can be outlawed unless it causes physical harm. This contention, however, reflects Scalia's personal opinion — and the opinions of some justices before him — not the text of the Constitution.

Instead, the Constitution says, "Congress shall make no law...abridging the freedom of speech, or of the press." It's quite a jump from these words to claiming that a state (not Congress) or a locality cannot prevent the sale of indecent or morally warping video games to minors. The Court's role, as understood by the Founders, was to apply the law as written and to void clearly unconstitutional acts — the clear-violation standard. But when a violation was not clear, the Court was to defer to legislatures, the elected representatives of the people.

Beyond the spoken and written word, the Founders wisely left it up to such legislative bodies to determine what forms of expression, if any, should be made illegal. That is the Constitution's allocation of power in this realm. The Court's ruling shifts power from the states to the federal government, and from the elected branches to the unelected branch, all under the guise of protecting the individual — and the Constitution itself.

But such a ruling protects neither the individual nor the Constitution. Rather, it cheapens the former and misapplies the latter, depriving the people in the several states of the right to promote a virtuous citizenry and a decent and livable society. People who didn't like California's video game policy could always have fled the state, but no American can flee Justice Scalia's opinion.

High Court Rules California Can't Regulate Sale Of Violent Video Games To Kids June 27, 2011
Supreme Court Rules On College and Business Cases June 6, 2011
How To Save The World, One Video Game At A Time April 11, 2011