Accessibility links
A Female 'Swordboat' Captain Returns To The Sea Linda Greenlaw took a decade off from commercial fishing, but the siren call of the deep blue water drew her back in. The only female swordfish boat captain in the United States recounts her latest adventure at sea in a memoir, Seaworthy. 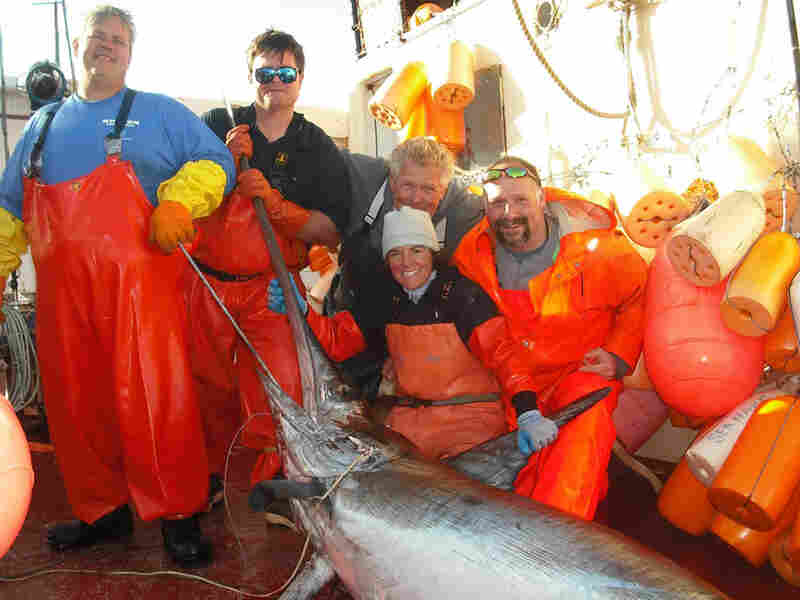 "I've never been fishless at the end of a haul back," says Linda Greenlaw (center). "My biggest day was 107 swordfish — that's huge — over 10,000 pounds of fish in one day." Dave Hiltz hide caption 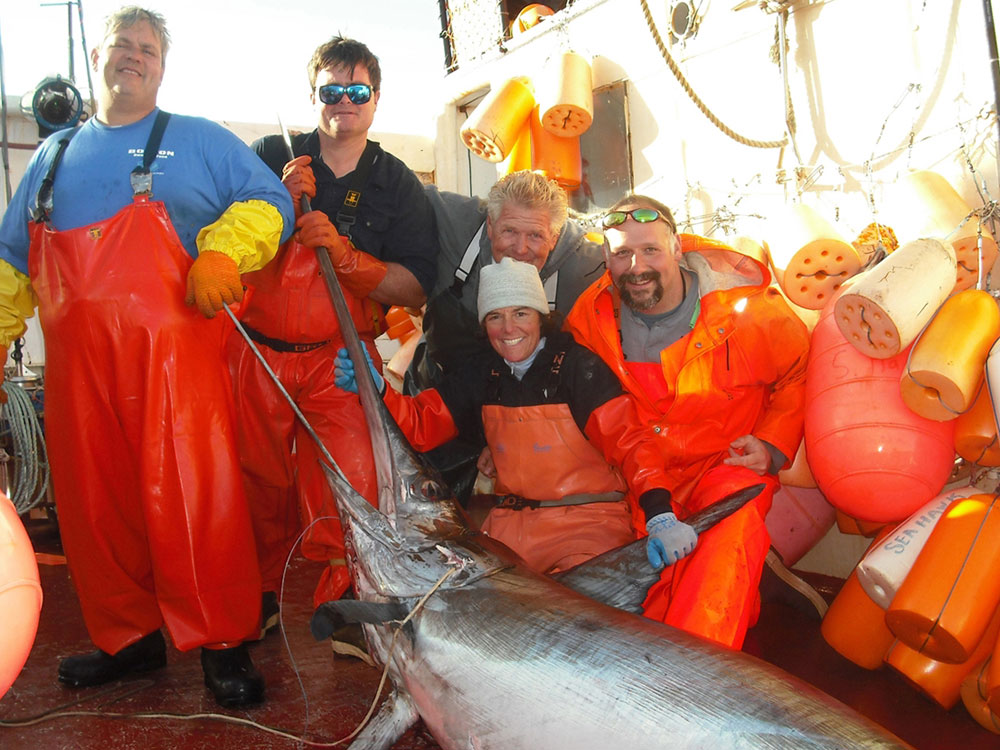 This interview was originally broadcast on June 8, 2010. Seaworthy: A Swordboat Captain Returns to the Sea is now available in paperback. Greenlaw and her mother Martha have also recently released a cookbook, The Maine Summers Cookbook: Recipes for Delicious, Sun-Filled Days.

For an entire decade, there were no female swordfish boat captains in the United States.

That's because Linda Greenlaw — who broke down gender barriers in the commercial fishing industry 24 years ago when she became the only working female swordfish boat captain in the U.S. — decided to take a decade off from life at sea.

After 10 years of lobstering and writing in Maine, however, the siren call of the deep blue water drew Greenlaw back to the world of long-line offshore fishing. At 47, she signed up to captain the Seahawk, a rusty craft with faulty equipment and a small crew, for a 60-day expedition off the coast of Nova Scotia.

Seaworthy, Greenlaw's account of her time captaining the Seahawk, contains details about the major setbacks she faced during the swordfishing trip, including almost losing a man overboard and (briefly) spending time in a Canadian jail after inadvertently crossing into Canadian waters.

Greenlaw tells Fresh Air contributor Dave Davies that despite the setbacks and the uncertainty, she couldn't envision herself leaving commercial fishing again.

"I like the way I feel when I'm at sea. And I'm passionate about catching fish," she says. "It's really very much about being in this world apart. I've learned through the years that the things I really love about being in this very separate world are probably the same things I dislike: total solitude, being absolutely self-reliant and responsible for your entire world with very little input. I'm on a boat at sea. I'm sometimes 1,000 miles from the closest dock with four or five guys. And you know, that's your entire world. There's very little contact with anything outside of that world."

Greenlaw is also the author of The Hungry Ocean, Slipknot and All Fisherman are Liars: True Adventures at Sea. She was also featured in the book The Perfect Storm and in the Discovery Channel series Swords: Life on the Line.

How she reels in swordfish

"It's all hands on deck including the captain, and that's my favorite part of the job ... hauling the gear because it's just like Christmas. You can't wait to see what you're going to get. You tie-in at the end of the morning and start hauling it. The captain drives the boat along the line — kind of following these floats — and when the line gets tight or you feel some strain on it, that means you have some weight on a hook. You back the boat down, stop the boat hopefully and see what you have. ... [You do] hand-over-hand hauling. One man, one fish. And you hope it's a swordfish. Sometimes it's a shark. Sometimes it's a tuna. Sometimes it's mahi-mahi. But the target is swordfish. That's what we're all praying for."

On conditions during swordfishing season

"Sleep deprivation is a big part of the swordfish industry. We're lucky if we get four hours a night. The days get long, depending of course on weather, which is the biggest factor. If you're trying to haul in the gear in bad weather, it just takes a little bit longer. Every fish that you stop to get aboard is a little more difficult to get aboard. Part-offs [where the line gets cut] are a huge factor in the length of a day. If you're hauling back the line and you have two or three or five part-offs in a day, each time you have to chase the end, so it's time-consuming. A captain can make a bad set and catch a lot of sharks. It's very time-consuming."

On being a woman in an industry dominated by men

"I fell in love with fishing at the age of 19. I love what I do. And honestly, gender has not been an issue. I started on deck, I worked very hard [and] had an opportunity to run a boat. I came up in the traditional way. I stayed on a boat long enough to become first mate. The owner of the boat bought a second boat. That was my opportunity to become captain. I worked very hard and became very good at it. I hire my own crew. A lot of questions are about men working for a woman. I hire my own guys. Any man that doesn't want to go to sea with a woman hopefully won't ask me for a job." 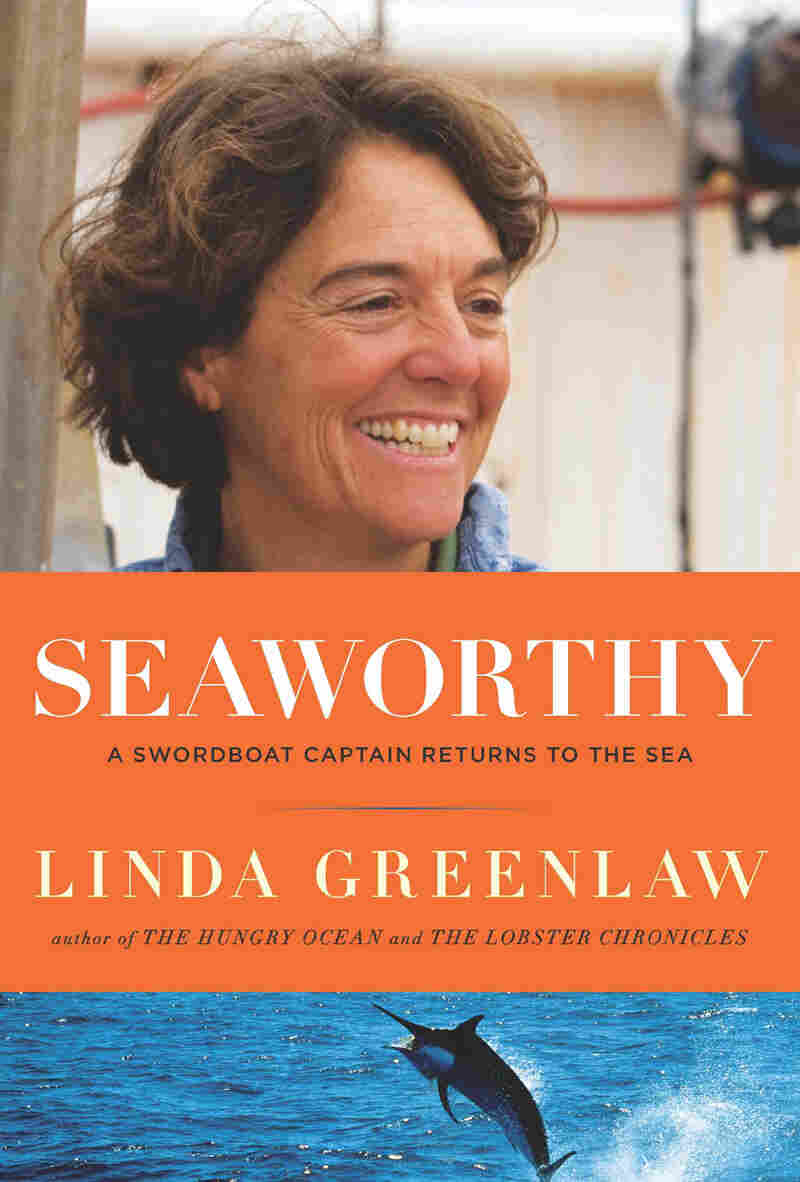 Ripe and one sliver shy of full, the cantaloupe moon shone a flashlight beam along our path as we steamed east through the Gulf of Maine. It was glassy calm, and running lights glowed dimly on the stabilizing birds at the ends of the booms, rounding their edges to appear like jet engines under wings, red on port and green on starboard. This breathless night allowed us to haul the birds out of the water and gain a full knot in speed, as they normally ride below the surface to retard the roll of the boat and they slow us down in the process. The steady drone of the diesel two decks below added a soothing hum to the slow, gentle rocking of mysterious origin. The last of the lime green landmass had crept from the edge of the radar screen as the faded umbrella of city lights closed over our wake. At sea—it's more a feeling than it is a place.

It was this feeling, the state of being at sea, that I hadn't experienced in ten years. This sensation is the result of living the total contradiction of burden and freedom. I am the captain, I thought. The freedom to make all decisions, unquestioned and without input, was something that I had missed during my sabbatical. To be held ultimately, although not solely, responsible for the lives and livelihoods of a loyal and capable crew was strangely exhilarating and empowering. But high hopes and expectations were weighty loads. It's the willingness, and not the ability, to bear that burden that separates captains from their crew. Right here and right now, as the Seahawk plodded along, I was fondly embracing the burden of that responsibility. Just being on the boat made me feel good. I was confident. And confidence is a key to success.

I tweaked a knob on the autopilot to correct our course two degrees and remain on a perfect heading according to the numbers displayed on both GPS's. As I eased myself back into the captain's chair, Arch pulled himself up the narrow stairway and into the dark-paneled wheelhouse beside me. "Everything is secure below. Timmy is in the engine room doing a few things, Dave is reading a magazine at the galley table, and Machado is sleeping," he reported. "I really like Machado. He's so funny! I think he'll more than make up for not being around to help at the dock. You got a great crew!"

"Thanks, Arch. I know I do." I meant it. Confidence in my crew fed my personal confidence. I believed that this was the best crew I had ever sailed with. Certainly the most mature; we probably wouldn't be plagued by the usual crew problems that stem from basic personality differences and lack of sleep. I wouldn't have to break up any fistfights or garnish any wages as punishment for poor behavior. Small squabbles could be annoying, I knew. And nothing was more exasperating than trying to reason with real, solid, mutual hatred when both parties are virtually connected at the hip for an extended voyage. Liking one another was huge. As far as work ethics go, nothing beats the older, more experienced guys. It's very much like the "young bull/old bull" thing. Four of the five of us owned and operated our own boats, so we already knew the basic moves that otherwise needed to be taught. Mike Machado was the only non-captain aboard, but he was also the only one other than me with any Grand Banks fishing experience. And between the two of us, I suspected that we had racked up more miles along the salty way than any pair I could think of. "Yes," I said, "I think we have a winning team aboard. Just the right combination of talents and strengths."

"Speaking of talents and strengths, here I am," Tim said laughingly as he popped his head through the back door of the wheelhouse behind Archie. "The engine room is looking good. The water maker is cranking out, and the ice machine is making great ice—lots of it. I just shoveled. How's the list?" he asked, referring to whether or not the boat was leaning. I looked directly at the bow to determine that we were indeed not listing to either side and gave a silent nod. I was happy to forgo the usual lecture on the importance of keeping the boat on an even keel and the dangers inherent in not doing so, which is why I'd asked Tim to compensate by moving ice or fuel.

"Why didn't you tell me? I would have helped you shovel," said Archie.

"You take care of the galley, and the rest of us will handle the shoveling. Thanks for dinner, by the way. It was great," Tim said. I was relieved that Timmy had understood without having to be told that Archie was valuable in many ways and that none of his assets were in evidence on the end of a shovel. At his age and with the range of experience and breadth of knowledge that Archie had concerning just about anything, I didn't want to waste him in the fish hold. Again, I was appreciating the maturity level of my shipmates. I knew that Archie and Tim had a mutual liking and respect for each other, reminding me of father and son.

"I'm gonna call Marge tomorrow and get a recipe for chicken," Arch said. "Do you mind if I hook up the satellite phone in this corner? It's the only place the antenna wire reaches. Everyone can use it to make calls." He was twisting the small coupling at the end of the rubber-coated wire that came through a hole in the aft bulkhead and terminated in the corner he'd mentioned. The five of us had a lot in common, I realized. Our similarities went beyond the fishing gene. Food was of utmost importance, as was family. So a call home for a chicken recipe was a no-brainer. "I'm gonna fix that computer on my watch tonight. Did you find the manual for the weather fax? I know I can get that going. I bungeed the hell out of our stateroom. These things are coming in really handy so far," he said as he pulled a short loop of bungee cord out of a hip pocket. "These and the two-part epoxy . . . I can keep us going with this stuff." I had always known Archie as a guy with a short attention span. I guess you'd call it adult ADD. 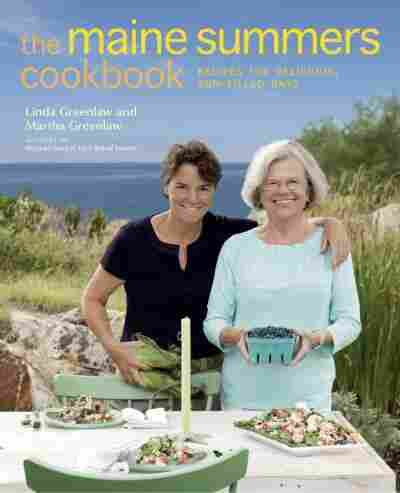 by Linda Greenlaw and Martha Greenlaw 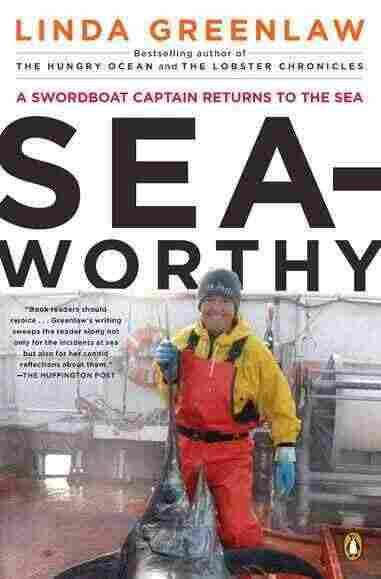 A Swordboat Captain Returns to the Sea