Accessibility links
Political Gridlock Rises, The Debt Ceiling Doesn't Why Democrats charge Republicans with wanting the economy to fail, why President Obama is running out of options, and an economist who says voters — not just politicians — bare the blame. 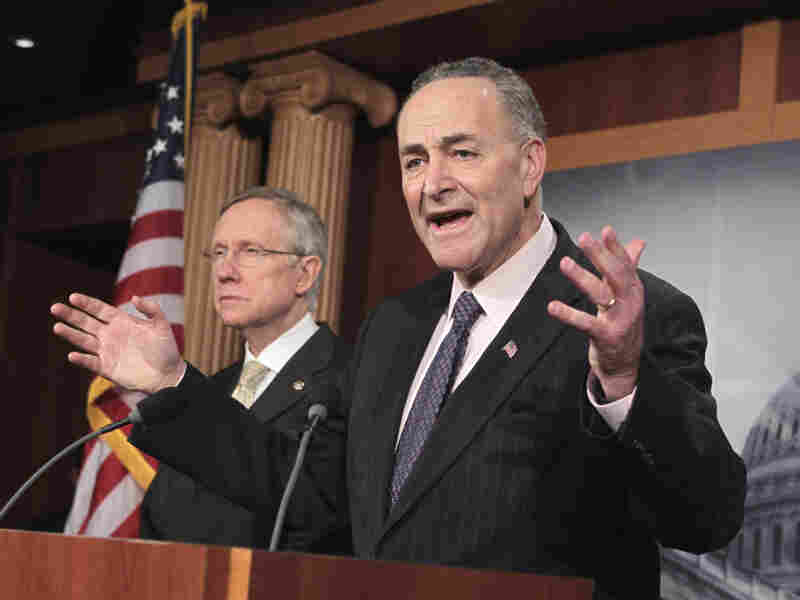 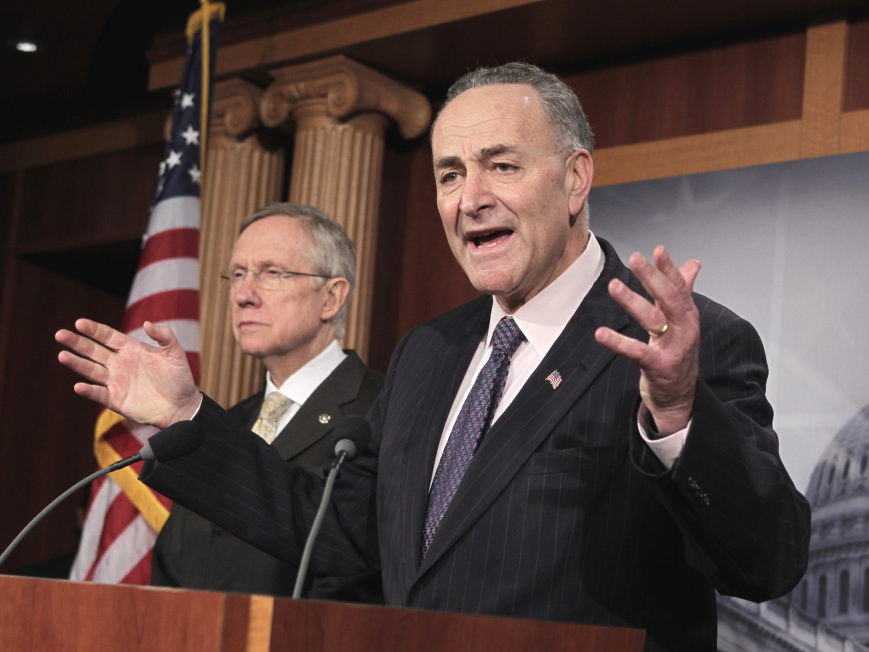 The Senate Finance Committee was set to vote this week on new free trade agreements with South Korea, Colombia and Panama.

But when the meeting rolled around, Republican senators boycotted, saying they hadn't been given enough time to examine the agreements.

"All of a sudden, it's sort of like a new fever has taken over the other side," said Sen. Chuck Schumer (D-NY), "that the best way to win is hurt the country as much as you can, and that will create political benefit."

The sniping is just the latest example of the politics of dysfunctional government — politics that saturate the issue of the day in Washington: whether to raise the debt ceiling.

Congress has lifted the debt limit more than 100 times in the last century. Why is this time different?

How We Got Here

Aug. 2. That's when the administration says the U.S. will default on its debt if the ceiling isn't raised.

As NPR's Mara Liasson tells Guy Raz, host of weekends on All Things Considered, the current gridlock over the debt limit is unprecedented.

"What happened was, in 2010, the Republicans got a majority in the House of Representatives," she says. "And many of the new Republicans campaigned on a promise not to raise the debt ceiling."

Lawmakers have always used votes on the debt ceiling to make political points, she adds. When he was a senator, Barack Obama voted against raising it.

"However, the party in the majority usually swallows hard and votes to raise the debt ceiling," Liasson says.

Not this time. At least not so far.

This week, John Boehner, the Republican speaker of the House, drew a line in the sand about a debt ceiling deal.

"No tax increases," he said. "Zero. I've made it clear to the president; we're not going to raise taxes. You can't raise taxes on the very people that we depend on to invest in our economy and to create jobs."

President Obama responded at a press conference with frustration.

"The Republican leadership in Congress will — hopefully sooner rather than later —come to the conclusion that they need to make the right decisions for the country," he said. "That everybody else has been willing to move off their maximalist position. They need to do the same."

Republicans who oppose raising the debt ceiling, Liasson says, are betting that voters will blame Obama for any damage to the economy.

"This has never happened before," Liasson says. "Republicans I've talked to in Congress aren't so sure that if things come to a total impasse that they'll be the ones who come out looking good."

For The President, Fewer Options

Once upon a time, historian Julian Zelizer says, the president would have had more sway over a gridlocked Congress.

"A great example is President Lyndon Johnson," Zelizer says. In a televised speech at the height of the civil rights movement, Johnson used the "bully pulpit" of the presidency to persuade Congress to reform voting rights laws. "It was a very effective moment where Johnson used the bully pulpit."

Ronald Reagan also did it, Zelizer says, appearing on television in 1981 to pitch spending cuts directly to the public. "Public support instantly jumps, and very few people in Congress are willing to take him on," the historian says.

President Obama tried his own hand at the bully pulpit this week, suggesting lawmakers take cues from his daughters, who he said finish their homework a night in advance.

"They don't wait until the night before. They're not pulling all-nighters," he said. "They're 13 and 10. Congress can do the same thing. If you know you've got to do something, just do it."

Fighting gridlock from the bully pulpit is much harder for a president today, Zelizer says. Congress is too polarized to be swayed, in part because voters aren't paying much attention.

"President Bush had the same complaints often," he says. "He was telling Americans what he was doing and he said they didn't hear him or they didn't understand. This might be all that's available to a president in 2011 and 2012."

The Myth Of The Rational Voter

As politically informed American citizens go, Bryan Caplan, an author and professor of economics at George Mason University, probably knows more about the issues than most people.

"For me, it's all too depressing," Caplan says. He's spent years studying the way voters are (or aren't) well informed about their government. He's also written a book, The Myth of the Rational Voter.

"If Republicans care about their party getting the presidency next year, it might be better for them if things don't improve," he says.

That's because, Caplan says, voters perform pretty poorly when it comes to assigning blame for political problems. Caplan's research has shown, for instance, that voters often blame the president and Congress for problems with education — not local and state governments, which actually control the schools. They also assign more blame for budget issues to the Federal Reserve than to the White House or Congress.

That means a bad economy — no matter who could be blamed for it — usually benefits the party out of power. Democrats learned that firsthand in 2008, Caplan says.

"John McCain, according to betting markets, was ahead in August — then everything tanked," he says. "It seems pretty clear that was good for Democrats."