Accessibility links
Graffiti Reclaims Egypt's Revolution From Marketers Companies in Egypt now reference the revolution in their ads — even some of the phone companies that gave into the regime's request to shut down service during the uprising. "The revolution is not a cow; let's not milk it," one man says. Street artists hope to reclaim the uprising's message. 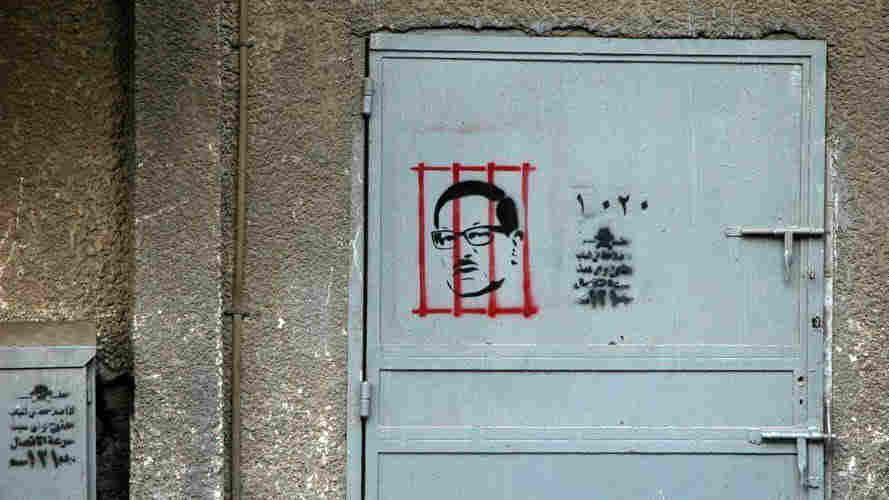 After the revolution, graphic artist Adham Bakry began stenciling the face of Safwat El Sherif, a member of Egypt's former ruling party, behind bars. El Sherif was arrested on corruption charges soon after. Bakry sees the rise of Cairo's street art as a push back against those who use the uprising as a marketing tool. Adham Bakry hide caption 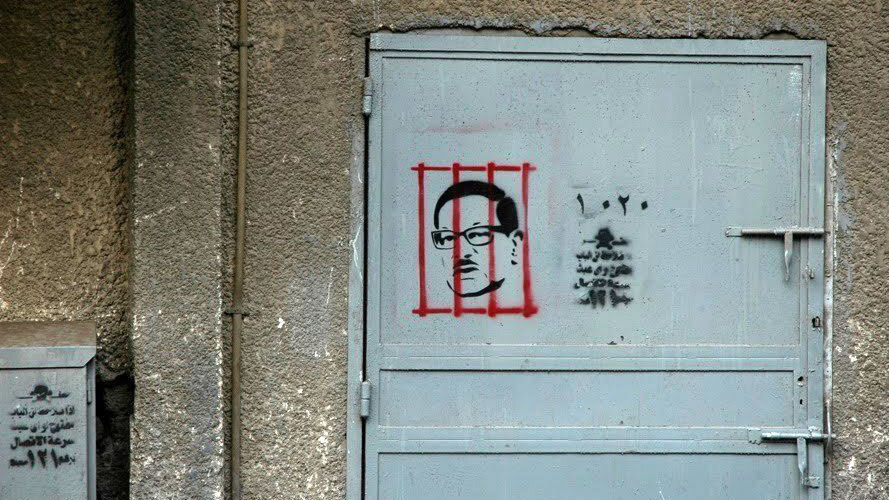 After the revolution, graphic artist Adham Bakry began stenciling the face of Safwat El Sherif, a member of Egypt's former ruling party, behind bars. El Sherif was arrested on corruption charges soon after. Bakry sees the rise of Cairo's street art as a push back against those who use the uprising as a marketing tool.

The revolution will be marketed!

Egyptian companies and multi-nationals are now using images of and references to the youth-led uprising that toppled autocrat Hosni Mubarak in advertisements to sell internet service, mobile phones, soft drinks, tourism and more.

The marketing has sparked something of a backlash among young Egyptians and has contributed to a rise in politicized street art and graffiti. Some street artists hope to reclaim the message in the streets by breaking the taboo of criticizing Egypt's military rulers.

On The Revolution Bandwagon

On the 15th of May bridge, in Cairo's typically atrocious traffic, people weave in and out, fighting their way home from work. Above, a big sign greets them: "Make Tomorrow Better: Coca-Cola."

It's just one of many instances of companies trying to use the revolutionary-style slogans to sell their products.

A few blocks away, there's a poster with a raised, clenched fist — holding a pair of sunglasses. It's an ad for a Red Sea resort, and says "Support Egypt's Tourism."

Another billboard shows people cleaning the streets, as many volunteered to do after the revolution. It says "The Country Is Ours;" the ad is for soap.

Companies have started to use references to the uprising against Hosni Mubarak to sell mobile phone service, soft drinks, tourism and more.

And it's not just billboards. Mobile phone and internet companies are filling the TV airwaves trying to cash in.

An ad for cell phone company Mobinil is built around images of Egyptians waving flags set to a classic patriotic song called "Egypt is my Mother."

Some in the advertising industry here are calling it 'revo' or revolutionary branding — like Youssef, a 26-year-old advertising writer and composer who doesn't want his full name used because he worries he'll lose his livelihood.

"If you can play with words to get your slogan to sound like it 'birthed' the revolution, then you're cool, you're gonna be, like, 'revo' brands, as I call them," Youssef said.

An Affront To Protesters

For many young Egyptians who took great risks in Tahrir Square to help bring down a dictator, the commodification of the revolution is offensive and stupid, according to Youssef.

Egyptians aren't dumb, Youssef said, and the ad writer has come up with his own unofficial slogan in response:

"The revolution is not a cow; let's not milk it."

To Youssef, the marketing also marks a heavy-handed attempt by companies to try re-write history. Some of the telecommunications companies now trying to associate themselves with the uprising are the same ones who quickly gave in to the Mubarak regime's request to help shut down service on January 28th, just a few days into the uprising.

For years, Egypt's media were reigned in and censored by government and military minders. That practice of intimidation has continued somewhat under the transitional military council now ruling the country. Egyptian journalists have been hauled before military interrogators for merely reporting on critical comments made about the army's ruling council.

"The government has a lot of experience in propaganda and media manipulation, and advertising has been hand in hand with them in that. They're playing the same game all over again. It just goes to show you that not a lot has changed," said Adham Bakry, a freelance graphic artist who camped out protesting in Tahrir Square during the uprising.

'Graffiti Is A Way To Reclaim The Streets'

Bakry is now fighting back with his street art. After the revolution he started stenciling on walls around the city the faces of two discredited leaders of the former ruling party, the NDP, holding on to prison bars. Not long after, the two politicians were arrested on corruption charges.

Bakry sees the rise of Cairo's street art and graffiti scene as kind of politicized push back against those using the uprising as a marketing tool.

"They just want to overwhelm people with this notion that 'this is the new Egypt' ... and keep using the same slogans ... and it bothers me," Bakry said. 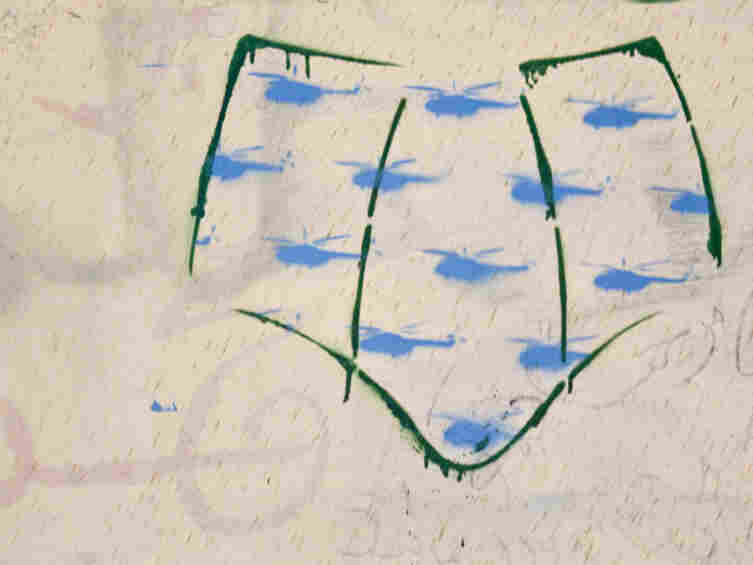 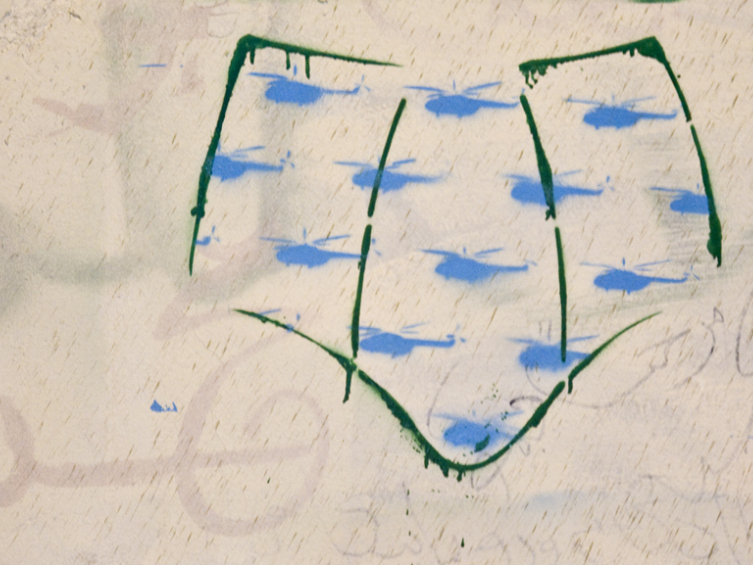 Bakry notes that his generation was raised on a steady diet of propaganda glorifying the Egyptian military. There are giant murals in Soviet realist style in most every city and town showing Hosni Mubarak as the great commander leading soldiers into the Sinai against Israel.

It was that kind of propaganda that helped buttress decades of authoritarian rule here.

"[They're] really bad murals too, really badly done," Bakry said. "I feel that graffiti is a way to reclaim the streets. I want to see more graffiti that is more critical, that's the work I want to do."

As one street artist put it, maybe more citizens will see that, and start to break that fear barrier they still have against criticizing Egypt's military rulers.