Accessibility links
In Thailand, A Campaign For An Exiled Leader Yingluck Shinawatra's party won a landslide victory in elections Sunday. Her win could bring back her older brother, Thaksin Shinawatra, who was ousted in a coup in 2006. 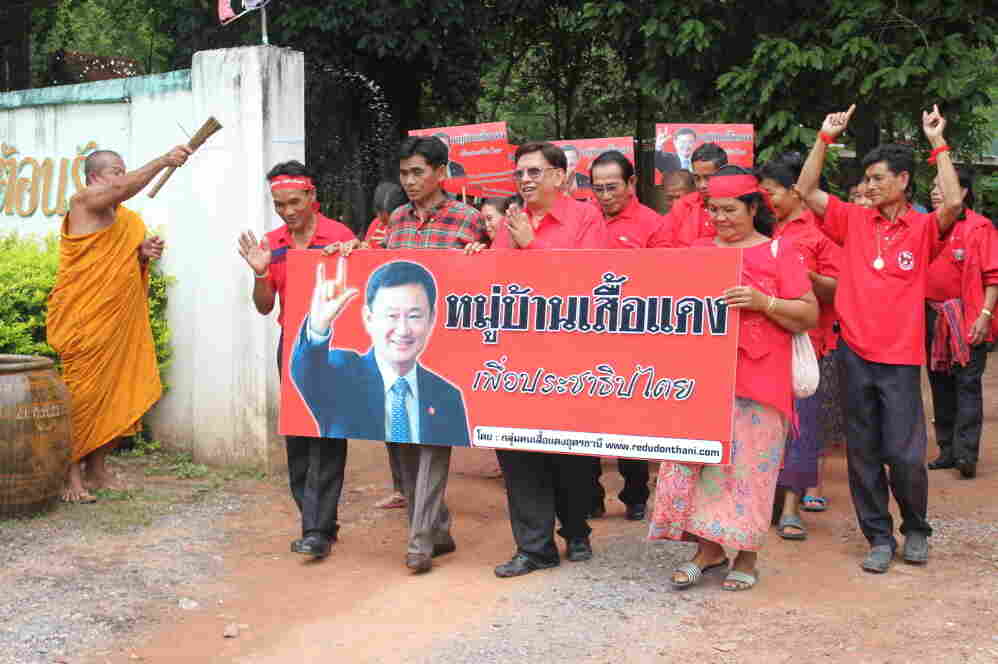 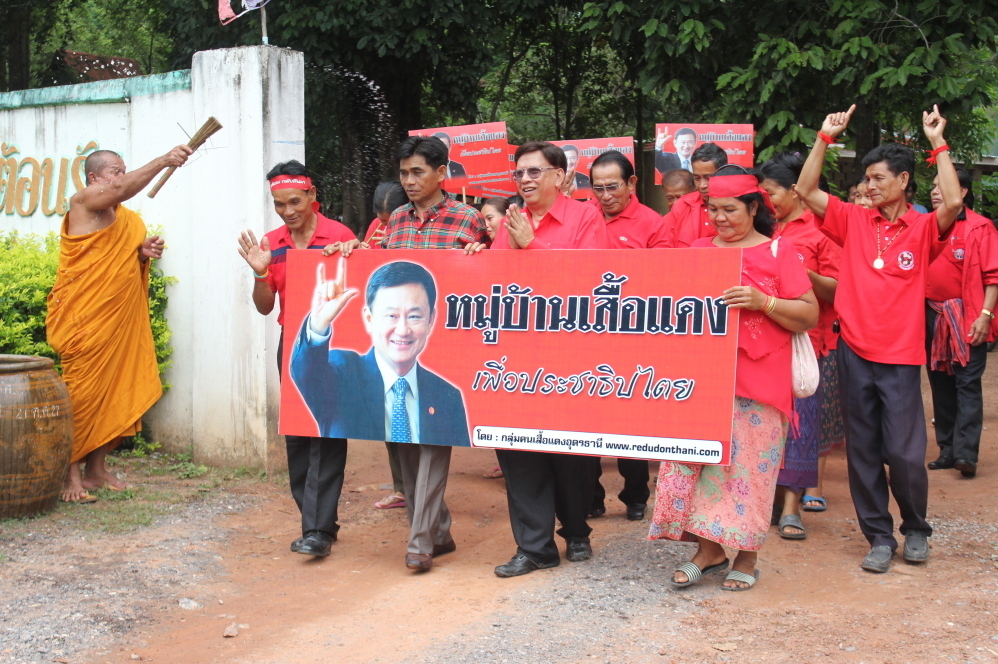 Election Results From The AP

Thai music blasts from a sound truck, as villagers in red shirts dance, listen to speeches, and eat sticky rice and spicy local cuisine at a local Buddhist temple. The residents of Baan Suksomboon, in northeast Udon Thani province, are here to declare that this is a "Red Village," organized in support of opposition candidate Yingluck Shinawatra.

But the faces on the campaign posters here are not Yingluck Shinawatra's. They belong to Thaksin Shinawatra, her older brother, who was ousted as prime minister in 2006.

"Since the first Red Village was created, we've made it clear that we want Thaksin to come back to govern the country as prime minister," says Anont Saennan, leader of Udon Thani's Red Shirts and an editor at a local newspaper.

As Anont is speaking, he gets a text message on his cell phone. It's Thaksin's staff, cancelling Thaksin's scheduled phone-in to congratulate Baan Suksomboon on becoming Thailand's 255th "Red Village." Apparently, Anont says, Thaksin is wary of provoking the authorities so close to the election.

Anont is a bit tense himself and says security agents have been shadowing him.

"We hear that the military has been telling village leaders to warn residents that anyone who comes here today will be arrested," he says. But both the authorities and the Red Shirts are restrained, and there are no arrests.

"We don't dare to organize in public," confides former chicken farmer Saifon Jettabootr. "We are scared that the government will use the law to arrest us. That's why we gather people here, using this Buddhist temple as our refuge."

Saifon says her participation in politics began with Thaksin. Her farm went under in the wake of the 1997 Asian financial crisis. She says that Thaksin gave farmers debt relief, easy credit and health care with co-payments of just $1 per treatment. She notes that her husband had his appendix removed for next to nothing.

When Thaksin became prime minister, he helped us. So we saw that we should pay attention to politics.

"Before Thaksin, we didn't care about politics or about who governed us," she says. "But then the economic crisis sent prices for gas, education and everything soaring. When Thaksin became prime minister, he helped us. So we saw that we should pay attention to politics."

Thaksin's policies — dubbed "Thaksinomics" by the media — helped the Thai economy bounce back from the financial crisis. They also helped him score two major electoral victories in a country where no prime minister had ever completed a full term. But he was later accused of corruption and ousted by a military coup.

With Yingluck's party winning a landslide in the election, she could grant her brother amnesty, and he could come home from Dubai, where he now lives in exile. But incumbent Prime Minister Abhisit Vejjajiva warns that Thaksin masterminded the Red Shirt protests, which paralyzed Bangkok last April and May. They ended in a military crackdown and 91 deaths.

"I don't see that amnesty would lead to any reconciliation," he said in a recent speech. "I've talked to many Thais and the majority of them say they will not allow a corrupt fugitive or people who created unrest in this country to whitewash their misdeeds."

Since Thailand overthrew its absolute monarchy in 1932, the country has seen elections followed by street protests followed by coups. Observers are concerned that this election will do little to break those cycles.

Thailand's top general said Thursday that the military will not stage a coup, no matter who wins the election. But he has suggested that Yingluck's party leaders are disrespectful to the Thai king. The army leveled that same charge at Yingluck's brother when it deposed him.

At her final, rain-swept campaign rally in Bangkok, Yingluck carefully pointed out that she does not oppose the institution: the monarchy. 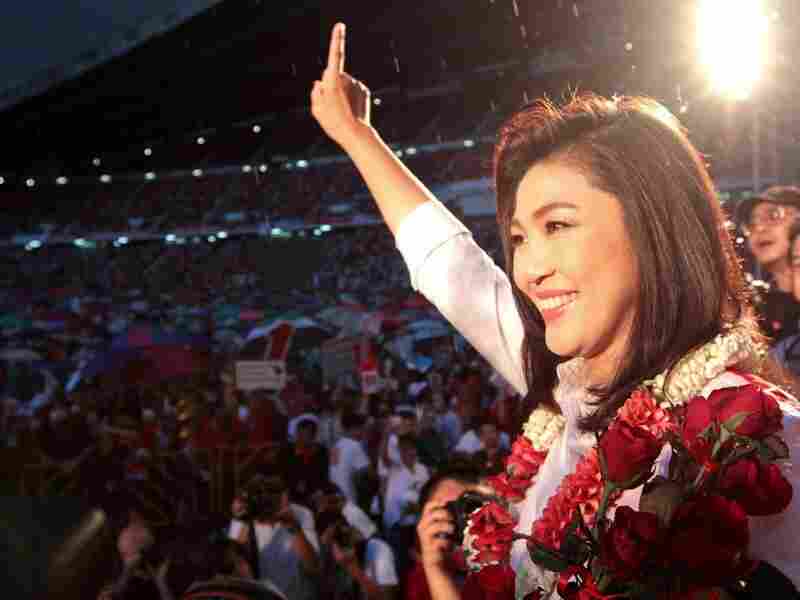 Yingluck gestures to her supporters during an election campaign at Rajamangala stadium in Bangkok on Friday. STR/AFP/Getty Images hide caption 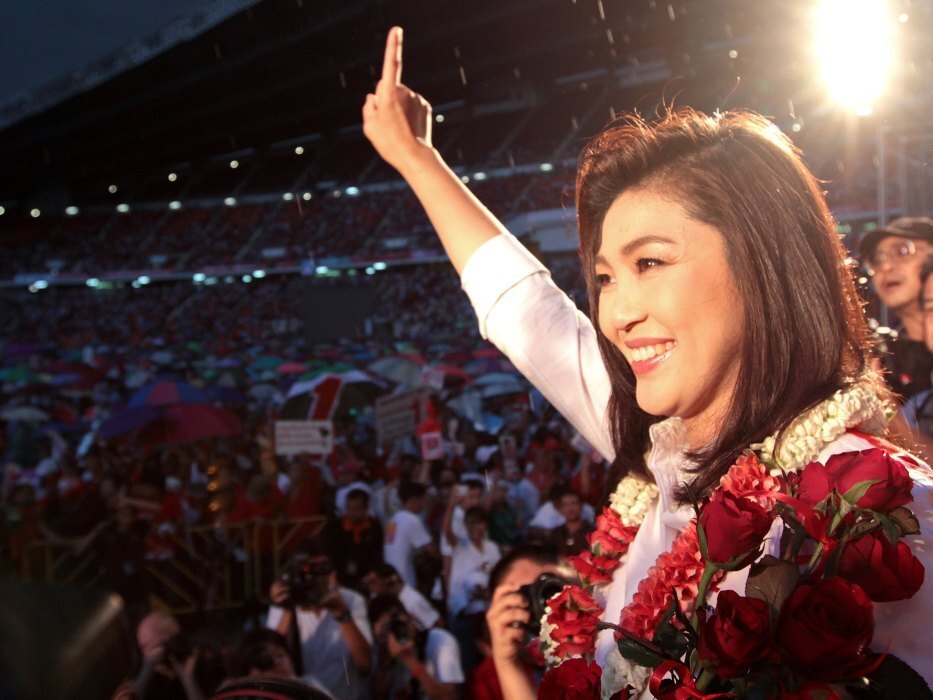 Yingluck gestures to her supporters during an election campaign at Rajamangala stadium in Bangkok on Friday.

"Some people accuse me and my party of having ill intentions toward our country and its institution," she told a boisterous crowd of supporters. "That hurts my feelings, because it's not true. But I won't debate with them to get votes. Instead I'll govern this country with my heart and my intellect."

Yingluck is a 44-year-old businesswoman with no previous political experience. She has helped to manage Thailand's largest mobile phone operator, which her older brother, Thaksin, sold in 2006 for nearly $2 billion — tax free, hence the corruption charges.

Kan Yuenyong, executive director of the Bangkok think-tank Siam Intelligence Unit, says that Yingluck is an outsider to the establishment — the monarchy, the military and the bureaucracy that have traditionally monopolized political power.

Kan predicts that Yingluck is most likely to get that assistance from her brother Thaksin.