Accessibility links
The Key To Disaster Survival? Pals, Neighbors A researcher's data suggest that ambulances, firetrucks and government aid aren't the principal ways most people survive during and recover after a disaster. Instead, it's the personal ties between members of a community that really matter. 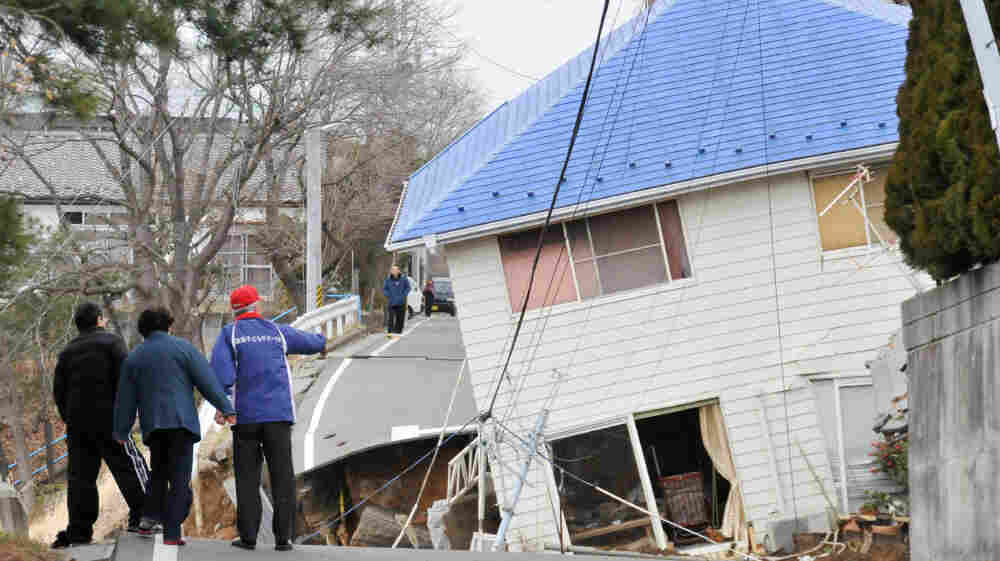 Residents check an earthquake-damaged house in Sukagawa city on March 11, in the Fukushima prefecture in Japan. A researcher says that after large-scale natural disasters, it's frequently friends and neighbors who are key to survival. Jiji Press/AFP/Getty Images hide caption 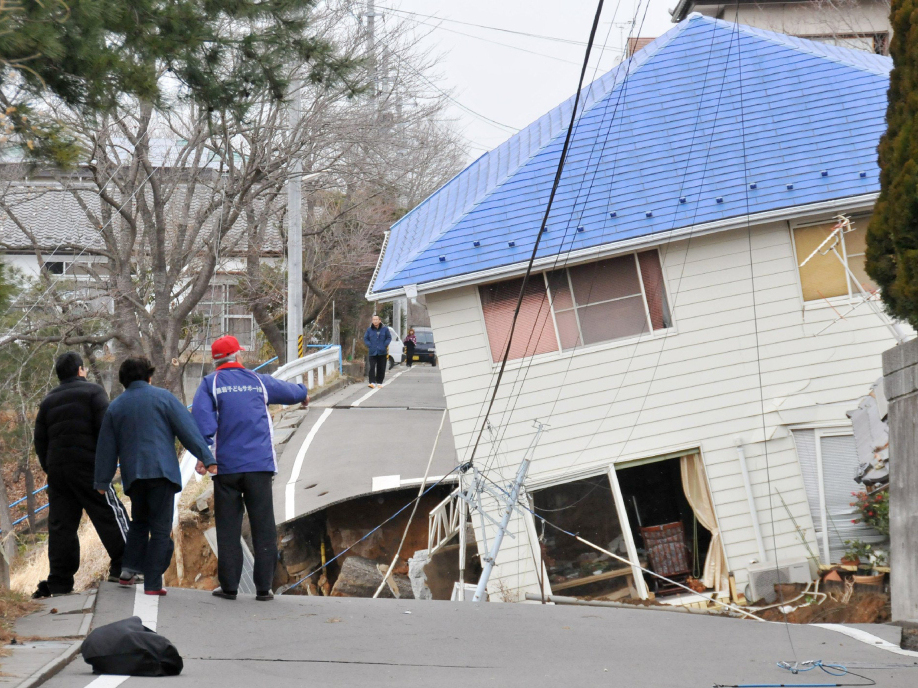 Residents check an earthquake-damaged house in Sukagawa city on March 11, in the Fukushima prefecture in Japan. A researcher says that after large-scale natural disasters, it's frequently friends and neighbors who are key to survival.

When Hurricane Katrina struck in 2005, one victim was political scientist Daniel Aldrich. He had just moved to New Orleans. Late one August night, there was a knock on the door.

"It was a neighbor who knew that we had no idea of the realities of the Gulf Coast life," said Aldrich, who is now a political scientist at Purdue University in Indiana. He "knocked on our door very late at night, around midnight on Saturday night, and said, 'Look, you've got small kids — you should really leave.' "

The knock on the door was to prove prophetic. It changed the course of Aldrich's research and, in turn, is changing the way many experts now think about disaster preparedness.

Officials in New Orleans that Saturday night had not yet ordered an evacuation, but Aldrich trusted the neighbor who knocked on his door. He bundled his family into a car and drove to Houston.

"Without that information we never would've left," Aldrich said. I think we would've been trapped."

In fact, by the time people were told to leave, it was too late and thousands of people got stuck. 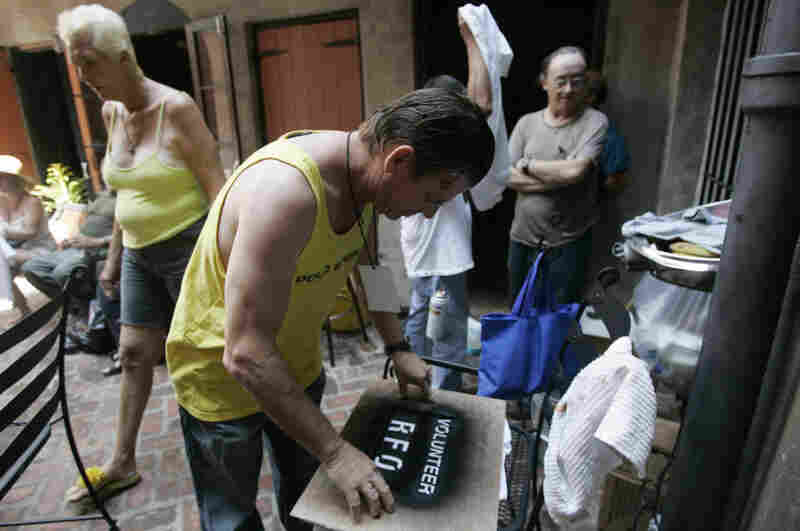 Residents of the Faubourg Marigny neighborhood of New Orleans printed T-shirts during a community meeting on Sept. 9, 2005. The neighborhood organized a cleanup effort even as mandatory evacuation of the city was under way. Refusing to obey the order to evacuate, many residents remained in their houses. Hector Mata/AFP/Getty Images hide caption 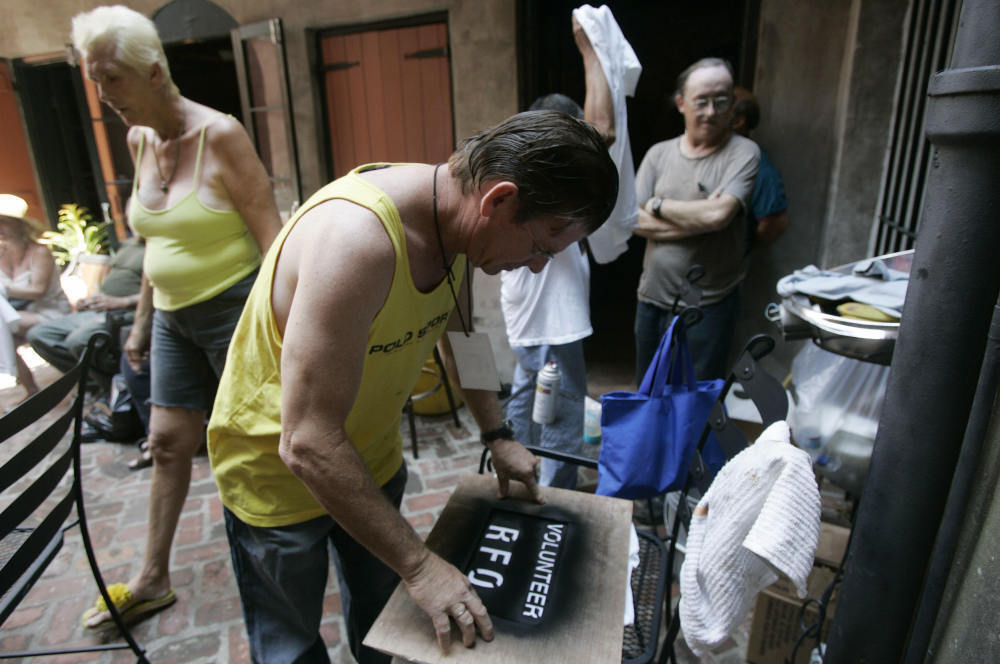 Residents of the Faubourg Marigny neighborhood of New Orleans printed T-shirts during a community meeting on Sept. 9, 2005. The neighborhood organized a cleanup effort even as mandatory evacuation of the city was under way. Refusing to obey the order to evacuate, many residents remained in their houses.

Because of his own experience in Katrina, Aldrich started thinking about how neighbors help one another during disasters. He decided to visit disaster sites around the world, looking for data.

Aldrich's findings show that ambulances and firetrucks and government aid are not the principal ways most people survive during — and recover after — a disaster. His data suggest that while official help is useful — in clearing the water and getting the power back on in a place such as New Orleans after Katrina, for example — government interventions cannot bring neighborhoods back, and most emergency responders take far too long to get to the scene of a disaster to save many lives. Rather, it is the personal ties among members of a community that determine survival during a disaster, and recovery in its aftermath.

When Aldrich visited villages in India hit by the giant 2004 tsunami, he found that villagers who fared best after the disaster weren't those with the most money, or the most power. They were people who knew lots of other people — the most socially connected individuals. In other words, if you want to predict who will do well after a disaster, you look for faces that keep showing up at all the weddings and funerals.

The Japan Example: 'I Was Just Running Around And Talking To People'

In Japan, Aldrich found that firetrucks and ambulances didn't save the most lives after earthquakes. Neighbors did.

"In Kobe in 1995, if you knew where your neighbors slept, because the earthquake was very early in the morning, you knew where to dig in the rubble to find them early enough in the process for them to survive," he says.

Because of his research, when a powerful earthquake struck Japan this March, Aldrich was certain that good neighbors would play a decisive role. Michinori Watanabe of Miyagi prefecture, about 100 miles from Fukushima in northern Japan, said the same thing.

Watanabe's father is paralyzed, and he needs a machine to breathe. When the earthquake struck and the power went out, the machine stopped working. Watanabe ran outside. He begged strangers: "Do you have a generator? Do you? Do you?"

"I was running around and talking to people, and after I talked to several people, a person who I just met — actually, I knew him from before — and he said, 'I got one,' so I told him, 'Please bring that in,' " said Watanabe, 43, a truck driver. "So I got that and I went back to my house and connected the equipment to the generator."

Watanabe's father survived, but it was a close call. But why not just call the Japanese equivalent of 911?

"At that time all the electricity was down, and the telephone land lines were down and my mobile was not working, so there was no other way than I myself go out running around, asking people," Watanabe said.

Not only did no professionals come to help Watanabe those first few minutes, there was no sign of them the first day.

Watanabe emptied his house of water and blankets and started helping neighbors who were homeless and shivering. They were still without help days later. And Watanabe did what good neighbors do when friends are in trouble: He improvised.

In Japan, A City Left In Shambles By A 'Mighty Woosh'

"I went on the street and stopped any car from outside, which has the number from outside the prefecture — I stopped them," said Watanabe. "I think it is not the proper way to do it, but I kind of pretended I was giving directions — and I found out who are they and what they have and then I asked them, "if you have anything, please leave it with us."

It's this passion for a local community and granular knowledge about who needs what that makes large-scale government interventions ineffective by comparison. It's even true when it comes to long-term recovery.

Beloit College economist Emily Chamlee-Wright has studied why some communities in New Orleans came back more quickly than others.

"One of the communities that in the post-Katrina context was the most successful was the Mary Queen of Vietnam community in New Orleans East," said Chamlee-Wright. "It's important to recognize that one of the reasons why they were so successful is that they ignored government warnings not to come back and start rebuilding too soon."

Governments and big nongovernmental organizations — which are keenly aware of the big picture — are often blind to neighborhood dynamics.

In Southeast Asia, Aldrich found that well-intentioned NGOs actually hurt the fishing communities they were trying to help. They saw the damage caused by the tsunami in fishing villages and started giving new boats to all the fishermen.

"Fishing is a very social activity. It is organized, really, not in a hierarchy but in a network," Aldrich said. "So you have someone who drives the boat, the person who steers, you have two people fishing in the water, some person who carries the net and some person who goes — takes the fish to market. Once every person is given their own boat, you've gone from five people working together to each individual working by themselves."

Fishermen who used to work together now became competitors. Trust broke down. Fights broke out.

"Some of the local activists I talked to called this 'the second tsunami,' " Aldrich said.

The Japanese government seems to get this. The government there actually funds block parties to bring communities together.

That might never happen in America, but Aldrich thinks each of us can do something on our own: Instead of practicing earthquake drills and building bunkers, we could reach out and make more friends among our co-workers and neighbors.

"Get more involved in neighborhood events," Aldrich said. "If there is a planning club, a homeowners association — if there are sports clubs nearby, PTAs — those groups have us in contact with people we wouldn't normally meet and help us build up these stocks of trust and reciprocity."