Accessibility links
'Evil Scientist' Wants To Teach People To Do Good Forty years ago, the Stanford Prison Experiment revealed that people tend to conform — even when that means otherwise good people doing terrible things. Now Philip Zimbardo, the psychologist who created that study, has a new project: proving that regular people can be taught to be heroes.

In 1971, at Stanford University, a young psychology professor created a simulated prison. Some of the young men playing the guards became sadistic, even violent, and the experiment had to be stopped. 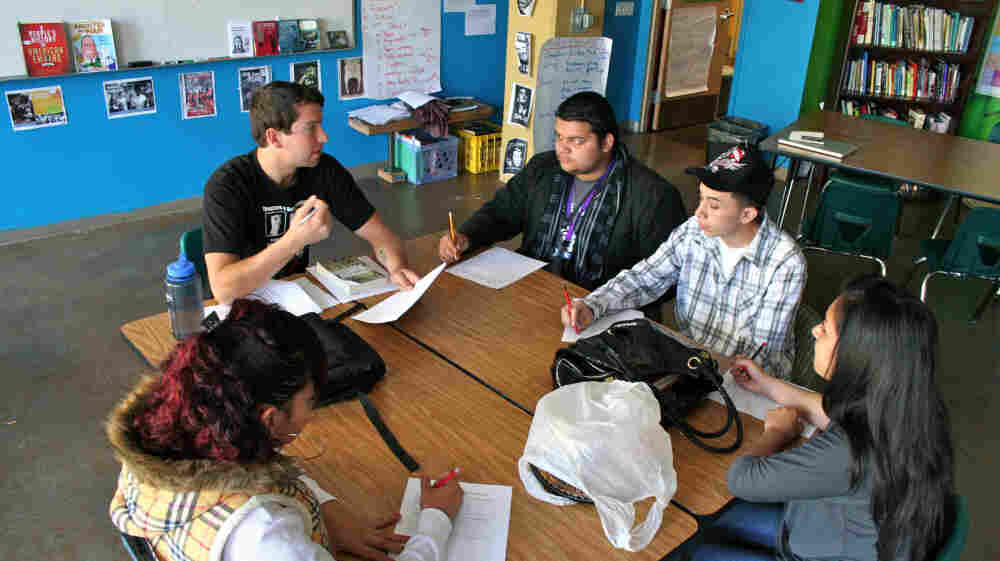 Civics teacher Devin Carberry talks about the bystander effect in relation to the Holocaust with his high school class at the ARISE Charter School in Oakland, Calif. Greg Miller/From the April 29, 2011 issue of Science magazine. Reprinted with permission of AAAS. hide caption 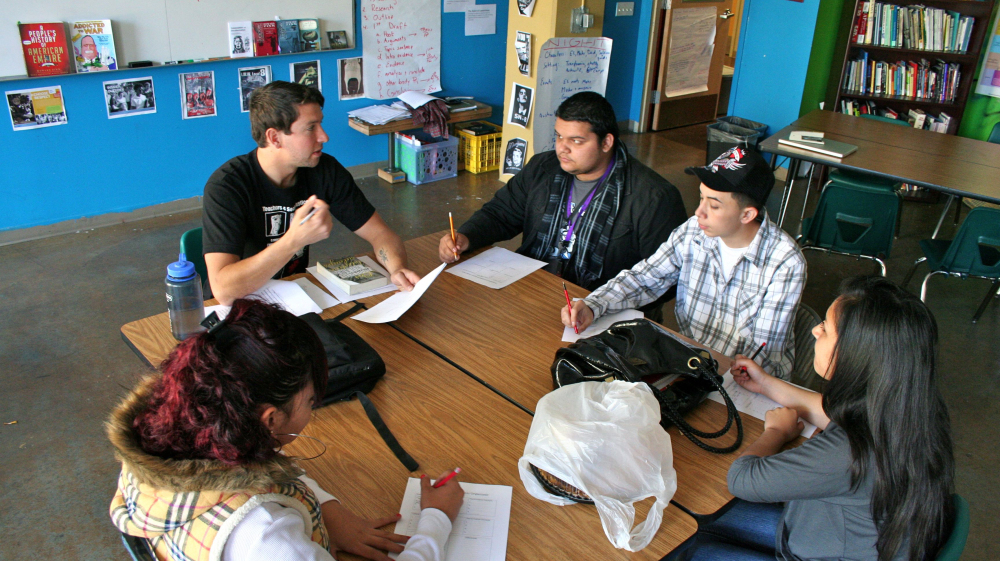 Civics teacher Devin Carberry talks about the bystander effect in relation to the Holocaust with his high school class at the ARISE Charter School in Oakland, Calif.

Greg Miller/From the April 29, 2011 issue of Science magazine. Reprinted with permission of AAAS.

The results of the Stanford Prison Experiment showed that people tend to conform — even when that means otherwise good people doing terrible things. Since then, the experiment has been used to help explain everything from Nazi Germany to Abu Ghraib.

Now, in a new project, Philip Zimbardo, the psychologist who created the prison experiment, is trying to show that people can learn to bring out the best in themselves rather than the worst.

Four decades after he created the Stanford Prison Experiment, Zimbardo says he's still hearing about it.

"I hate the idea that the Stanford prison study is the main thing most people know me for," he says.

Zimbardo has done many things. He was a professor of psychology at Stanford University for 40 years. He's been president of the American Psychological Association. He's written a book about the psychology of time and established a clinic for shy people. But he says his other achievements are often overlooked.

"Soon as people meet me, I go around the world, 'Oh you're the prison guy,'" he says. 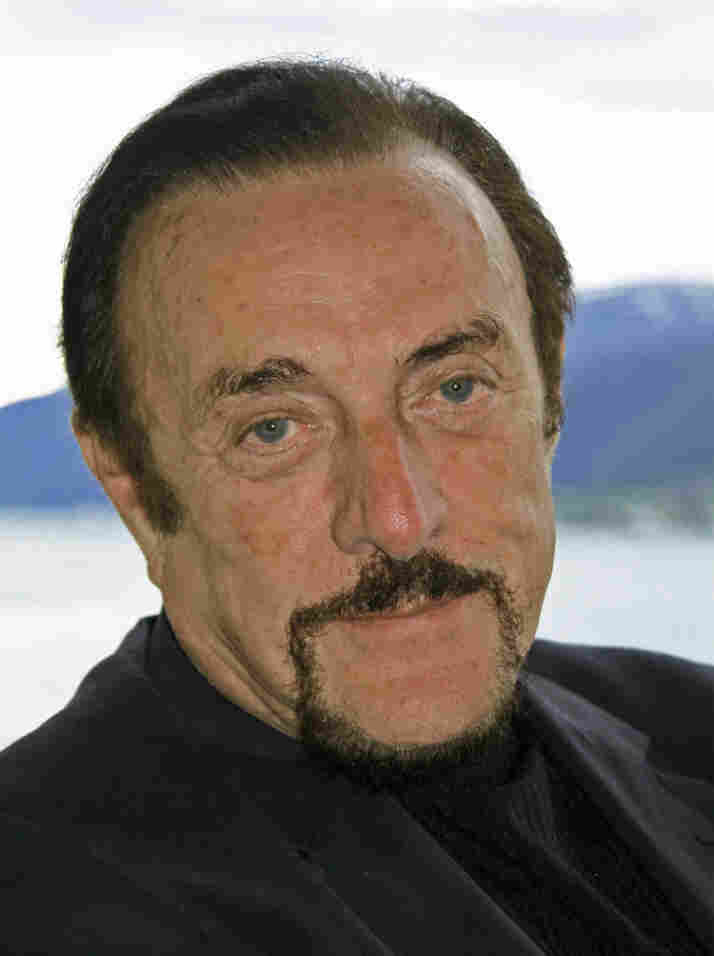 Dr. Phil Zimbardo has a new project, one that aims to change his legacy in a dramatic way: to turn regular people into heroes. Courtesy of Heroic Imagination Project hide caption 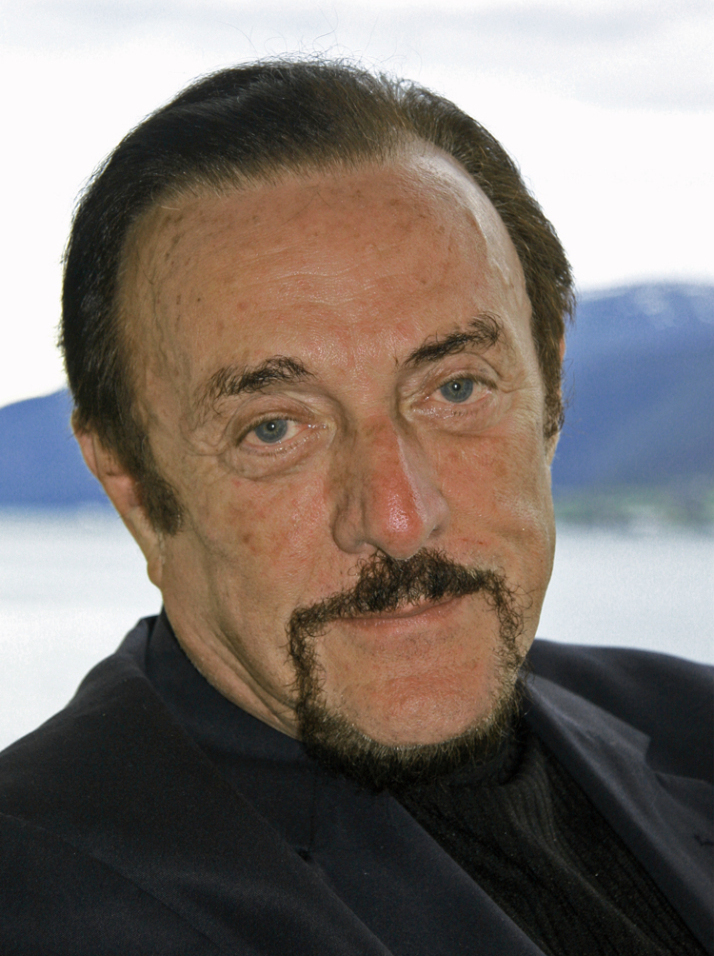 Dr. Phil Zimbardo has a new project, one that aims to change his legacy in a dramatic way: to turn regular people into heroes.

Here's how the experiment worked: Zimbardo recruited 24 male college students and paid them $15 a day to spend two weeks in a fake prison in a basement on the Stanford campus. Half the students were assigned to be guards, the others were prisoners.

As an educational video made about the experiment put it, "What happened surprised everyone, including Zimbardo. The illusion became reality. The boundary between the role each person was playing and his real personal identity was erased." Some of guards in the experiment became abusive, and prisoners showed signs of mental breakdown. After six days, Zimbardo shut the experiment down and sent everyone home.

'Here I Am, This Evil Scientist'

His reputation was sealed: He was the guy who had revealed that normal people can do very bad things — if you expose them to wrongdoing, even evil, they'll join in.

"So here I am, this evil scientist, creating this situation where evil is dominating good," he says.

The problem is, Zimbardo doesn't see himself that way. He sees himself as a force of good in the world, not evil. And so now, retired from teaching at the age of 78, he has a new project, one that aims to change his legacy in a dramatic way: to turn regular people into heroes.

Not comic book heroes. But, rather, someone who would have helped Jews escape the Holocaust. Or even something more ordinary, like standing up for a classmate who's being bullied.

"Heroes are not extraordinary people," he says. "They're ordinary people who do an extraordinary thing, step out of themselves, put their best self forward in service to humanity. And it starts with internalizing heroic imagination, namely — I could do it."

An excerpt from a 2007 documentary on the Stanford Prison Project by Democracy Now!

So he's calling it the Heroic Imagination Project. It's a nonprofit training organization based in San Francisco. One of the first programs has been to teach heroism at a charter high school, called ARISE, in one of the tougher neighborhoods of Oakland, Calif.

Over the course of the year, Clint Wilkins been teaching students in the heroism course to recognize how their environment can shape their behavior. "As you can see," he tells his students, "there are two kinds of ways of conforming, right? Do you guys remember which they are?"

Conformity is not an abstract concept to these students. Two years ago, the bystander effect happened not far from here. A 16-year-old girl was gang-raped by at least six men during a homecoming dance. Dozens of kids watched, some sent texts to their friends, telling them to come check it out. It took two hours before anyone called the police.

So this class is about training kids to break away from the pack, to be the person who defies conformity and does the right thing.

"They had to see the girl, you know?" says Phillip Johnson, a senior in the heroism class. "They had to see that girl go in the back with all those guys. Like if I see a group of guys in a circle, or something, I'm going to be like, what's going on here? It's like, oh. Woah. But that didn't happen, apparently."

The other students fall silent. Like Phillip, they'd like to think they would have been the one to call the cops. But if there's one lesson to be learned from this class, it's this: You aren't always the person you think you're going to be. Being able to imagine a different life for yourself is part of this school — and it's the point of this heroism course.

It seems to be taking hold in Brandon Amaro. He's a sweet-faced, 16-year-old kid who grew up in a farm town in southern California. Brandon says sometimes he feels like he could do something really exceptional with his life, something even his parents might not know he's capable of. But then he starts having doubts.

He says it's as if there are two Brandons. "The good one," he says, "is like an over-energetic bee in my ear, always buzzing and buzzing, telling me, 'You can do it, you can do it. Go for it.'" Then there's the bad one, "who's kind of like someone pressing down on your shoulders. He sees something good, he says, 'No, you can't try.'"

Brandon says when he imagines himself grown up, he's just not so conflicted anymore. "The older me is going to be much more mature, more confident," he says. "He's going to walk and everybody's going to just know it's him. He's going to know who he is."

Can Courage Be Taught?

Zimbardo says he sees himself in these kids. After all, he grew up poor, too. "Growing up on welfare, in poverty, in the ghetto, in the south Bronx, amidst evil, drugs, prostitution and gangs and violence — I rose above that," he says. "In some mystical way, I have always been the leader."

But the question is, why did Zimbardo rise above? Why does anybody become a leader, or a hero, and someone else becomes a follower, or worse? And do we have a choice? Zimbardo's class is teaching the students that they do.

But other social psychologists believe humans are more hard-wired than that. For example, they say criminal behavior comes from individual differences in personality, things like lack of self-control. These are differences we're either born with or things we never learned as children.

Augustine Brannigan, who studies criminal behavior at the University of Calgary in Canada, is one of these people. When asked what he thinks of the idea of a heroism class, he replies, "Whether you can teach them to be heroes? No. What you can do is you can expose them to the narrative about heroes. If it takes, it takes. If it doesn't, they still have the narrative, and they can respect it. But that doesn't mean you've changed their behavior."

Zimbardo aims to prove this thinking wrong. He's betting that by studying heroic narratives, learning about human nature and taking on community service projects, the students will actually change the way they act.

The older me is going to be much more mature, more confident. ... He's going to know who he is.

Brandon Amara, a member of the heroism class at ARISE High School in Oakland, CA

One afternoon, while the students are in heroism class, a fight breaks out in the hallway. Not students, but some neighborhood kids, possibly gang-affiliated, drift in from the street and start causing trouble. A teacher calls 911.

The students in the heroic imagination class cluster in the doorway, craning their necks to get a better look. And when they return to their seats, they begin to wonder: Maybe this was exactly one of those opportunities they'd been talking about, a chance to step up and be a hero. But it all happened so fast, and no one did anything.

"Students could have been, like, you know, someone come get this person," remarks senior Phillip Johnson. "It shouldn't have been a group of people watching." On the other hand, other students argue, maybe having a teacher call the police was exactly the right thing to do.

Sometimes it's hard to tell when it is the right time to do something extraordinary, they say, and when it's better to just stay on the sidelines.