Accessibility links
How Do You Dismantle A Meth Lab? Funding for specially trained meth lab cleanup crews is drying up as state budgets are tightening. Police forces are learning how to handle the dangerous job themselves. 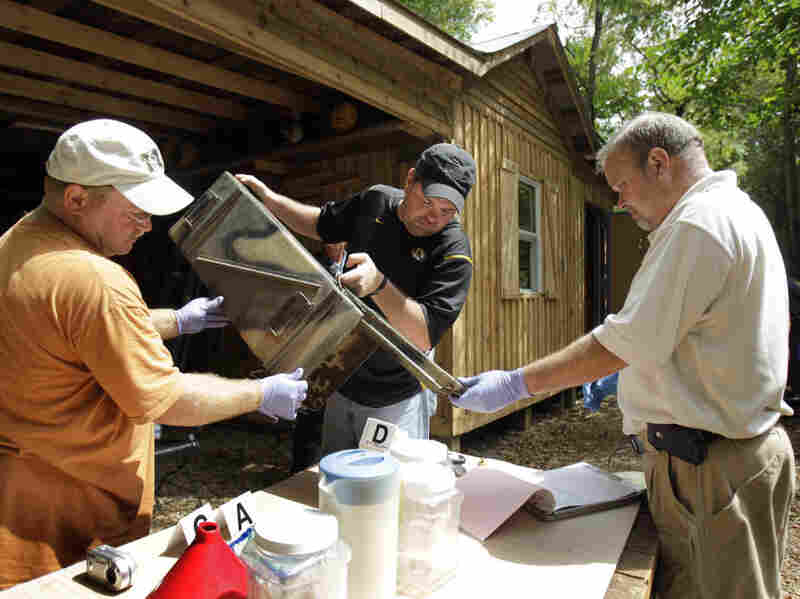 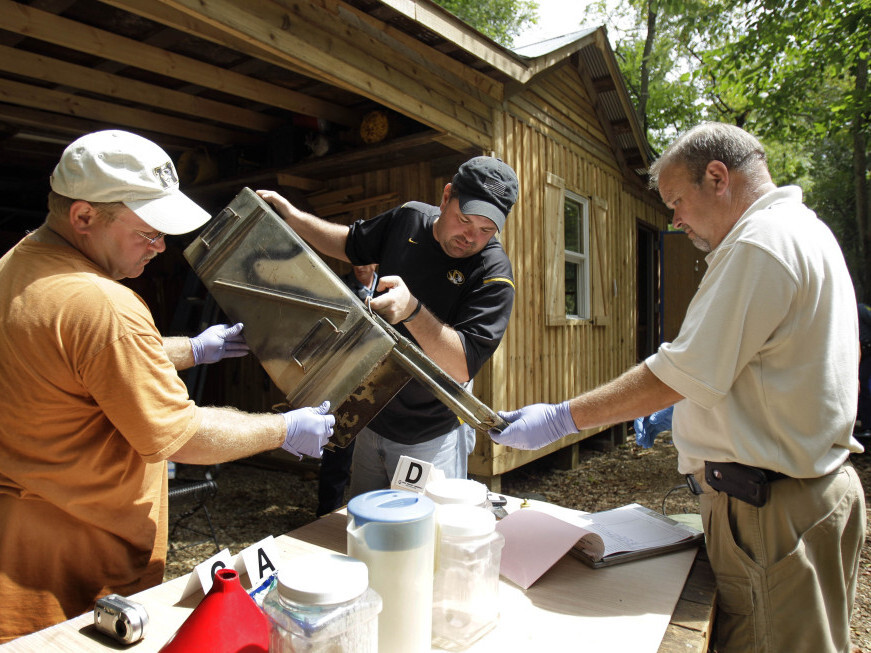 Franklin County, Mo., detectives sort through evidence during a raid of a suspected meth house in Gerald, Mo., on Sept. 2, 2010. Facing budget cuts, police forces from several states are training to handle meth lab cleanups rather than hiring trained cleanup crews. In 2010, Missouri had 1,950 meth lab busts and seizures.

Methamphetamine seizures are on the rise, and a crackdown on the drug during the last decade has led to some dramatic drops in manufacturing across the U.S.

But in some states, the numbers are edging back up to where they were before. Addicts have found easier ways to make the illegal drug, despite stricter laws regulating one of its key ingredients, pseudoephedrine.

"Phosphine gas will kill you. All the flammable materials that you've got to handle — if there's a spark or something, it could go high-order," he says. "There's just so many hazards in dealing with it, trying to make the area safe, and you can't leave them there. What if a little kid gets hold of it?"

In Tennessee, police used to call in certified contractors to neutralize those poisons and haul them away. It cost about $2,000 each time, which the federal government used to pay until budget cuts this spring.

Now, Tennessee authorities are turning to people like Kentucky State Police Sgt. Gerald Wilson, to learn how to do it themselves. Wilson is teaching a class of about 30 officers from across Tennessee how to use pH strips to help figure out what they're dealing with. Wilson's role here is like teaching a person to fish: teach a police officer to clean up a meth lab, and he'll save his agency thousands.

Kentucky had only about half as many labs as Tennessee, but it still saved a lot of money with that container system — lockers where police take all the hazards they find in meth labs.

Agent Kyle Darnell shows off one the Drug Task Force recently set up in Clarksville.

"There's not a whole lot to them; you've got vents, top and bottom, blowout panel in the back, and this grate that sits on top of a big catch pan, and that's pretty much it," he says.

Even as this new system comes online, Tennessee's meth busts are way down. They've fallen by more than half since the federal cleanup funds evaporated. Steve Burns, the sheriff in Greene County, doubts dealers are suddenly cooking less.

"The concern is that you have smaller counties that absolutely can't spend $2,000 or $3,000 every time they see a lab, and they just end up not reporting them," Burns says. "They end up, if [the meth is] in a jar, just busting it or pouring it out and letting it go."

Officials in North Carolina and Michigan have voiced similar worries. In Tennessee, lawmakers just approved a computerized database to track and limit sale of pseudoephedrine; other states have done this with varying degrees of success.

"This is a feel-good piece of legislation," says state Rep. Kent Williams. "This same legislation was passed in Kentucky. It's done absolutely nothing to control meth use. Meth labs have gone up in Kentucky over the last two years."

Mississippi and Oregon have gone the furthest: They require a doctor's prescription for pseudoephedrine. As a result, those states have seen dramatic declines in meth lab busts. One reason Tennessee didn't pass stricter laws is because pharmaceutical companies have fought to keep their cold medicines accessible.