Accessibility links
Marine: 'We're Starting To Fall To The Wayside' For Sgt. Jon Moulder, like many Marines serving in Afghanistan, the question is whether it's all worth it. Moulder has survived four roadside bomb explosions. He's seeing a counselor about post-traumatic stress. And he's feeling forgotten by Americans back home.

A very small number of Americans are now serving in the military — less than 1 percent. Some are looking for direction; others are inspired by a sense of patriotism or by a family member who served in an earlier war. In the series Who Serves, NPR looks at those who have made a decision few others have — to fight in America's wars. 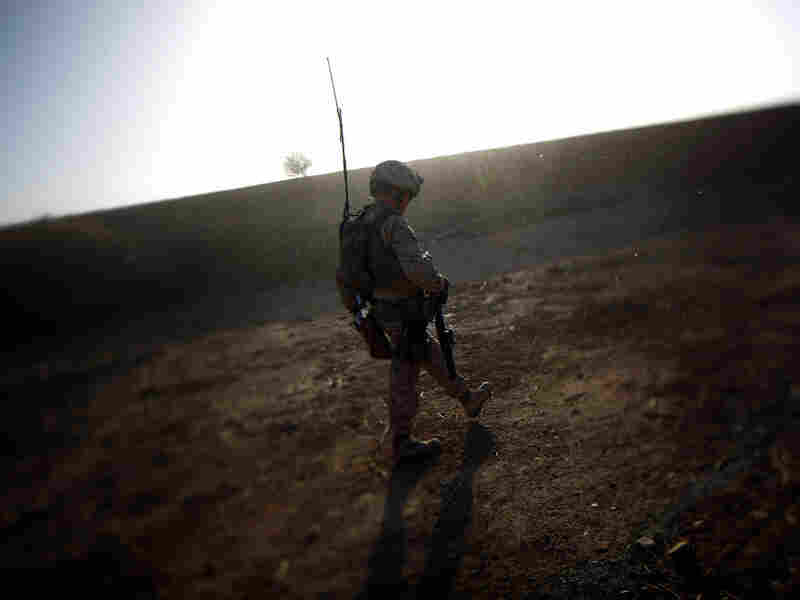 A Marine walks along a mud wall while conducting a search and clearing operation in Afghanistan's Helmand province, as the dust from a wheat thrashing machine falls like snow. David Gilkey/NPR hide caption 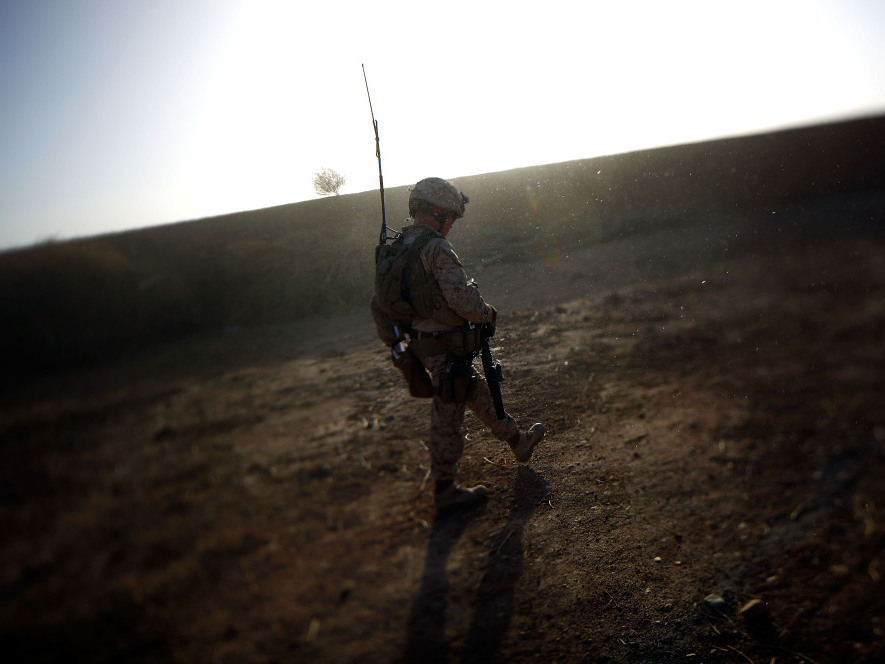 A Marine walks along a mud wall while conducting a search and clearing operation in Afghanistan's Helmand province, as the dust from a wheat thrashing machine falls like snow.

Just after dawn one day last month, Sgt. Jon Moulder led his patrol of Marines out of Combat Outpost Reilly — basically a collection of tents and sandbags and razor wire — and headed down a dusty road in Afghanistan's Helmand province.

Moulder is a short, compact Marine from Nashville, Tenn. He's on his fourth combat tour, split evenly between Iraq and Afghanistan.

That's meant a lot of time away from home.

"Yeah, it's this whole family thing, deploying and keep leaving," Moulder says. "I have my personal views and opinions on things."

Moulder has a wife back home and two children — a 6-year-old from a previous marriage and a 2-year-old.

By The Numbers: Today's Military

This is likely his last deployment. But he acknowledges that this life is exciting. It's fighting America's enemies; it's danger; it's firefights.

"It's the biggest adrenaline rush that you'll ever get," he says. "Not to say that I've done drugs but I don't think drugs could ever ... top the adrenaline rush of getting [into] a firefight."

"That's why guys, when they get home, they just do dumb stuff. [You're] basically an adrenaline junkie for about [the] first month that you're back home from this type of place."

'You Never Know When Your Last Footstep Is'

That adrenaline rush keeps him going. But all those deployments — and the endless patrols — take their toll. Moulder has lost several friends. Others have been seriously wounded, the most recent back in February.

"My team leader this deployment — he lost half his right leg," he says.

Out on that patrol, Moulder stopped at an Afghan security post. It's a small concrete building topped with the country's flag. A couple of Afghans joined the Marines, and they all headed off the road and began to cross a field.

Moulder was relieved to take his patrol off that dirt road. Roads and footpaths hide the crude bombs that kill Americans.

Every time you come over here on deployment like this, it's like you lose ... a piece of yourself. ... And I don't want to hit that breaking point to where I have no respect for humanity left.

Moulder's had his share of near misses. And for him, and many of the Marines, the question is whether it's all worth it.

Last month in Washington, the debate was about how many troops to bring home.

When asked whether he felt that people back home care about the war, Moulder says, "I think we're starting to fall to the wayside."

"This has been going on for so long," he adds. "Hell, you know, it's America's longest conflict running to date. ... We're kind of like the bastard children of our generation. Starting to become unwanted," Moulder says.

At times, Moulder says, he feels himself slipping away.

Moulder has a little more than a month left on his deployment. He says he has to convince himself to go out each day and risk his life to help the Afghan people.