Accessibility links
Movie Review - 'The Perfect Host' - A Party Planner Who Loves Surprises Nick Tomnay remakes his own short film about a criminal who wanders into a demented dinner party, but at feature length, the thriller overstays its welcome. David Hyde Pierce's effete madness gets squandered in twist after disorienting twist. 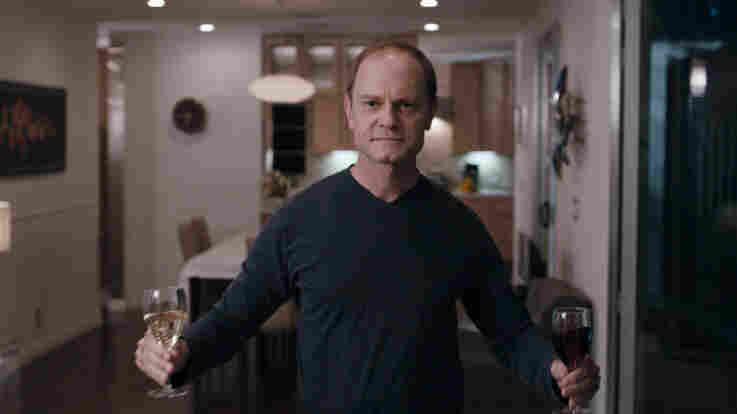 Wine And Dine: There's more than meets the eye to Warwick Wilson (David Hyde Pierce), who only seems like he's throwing a large dinner party. Whatever fun there is to be had in this overstuffed film comes from Pierce's outrageous hallucinations. Magnolia Pictures hide caption

Unpredictability is normally a virtue in the movies, especially for filmmakers who want to create the anything-can-happen dread and consequent shocks of the thriller. Adapting his own award-winning 2001 short film into his first feature, writer-director Nick Tomnay takes a more-is-more approach to the surprises of The Perfect Host. Around every corner is a new twist, a strategically placed misdirection or another switch of predator and prey. But while the gamesmanship is satisfying in moderation, it becomes a little monotonous in excess.

The predator — at least, as the movie begins — is John (Clayne Crawford), who has just knocked over a bank, made off with $300,000, and appears to have made a clean getaway. The discarded disguise, careful use of rubber gloves and multiple getaway vehicles speak to his meticulous planning and lack of a trail. Still, the cops immediately divine his identity, as well as the make, model and license number of the car he ends up driving. With the perfect crime and the perfect getaway not going so well, he probably should have suspected the fussy, effete, suspiciously accommodating host at his hastily chosen safe house was going to fall short of perfection as well.

That host, Warwick, is played by David Hyde Pierce, and the character isn't a very far cry from Pierce's better-known fussy, effete creation, Frasier's Niles Crane. Except that Warwick sees people who aren't there and has violently psychopathic tendencies. He quickly takes control of the situation from the hapless John, who ends up tied to a chair and drugged, witness to a pantomimed dinner party with guests that exist only in Warwick's head.

That might seem like a spoiler. But that's really just The Perfect Host getting started. That particular twist comes early, and it's just the first — and probably least outlandish — of the ones that follow.

It's also the fuel for most of the movie's black comedy, which is where Pierce does his best work. He effortlessly oscillates between the casual cruelty Warwick doles out to John and the humor of the character's delusions, which extend to imagined conga lines, hitting on an attractive dinner guest with corny lines like "My heart chakra is pointed at you," and an admittedly hilarious, if also mildly disturbing, dance sequence. Pierce is game for anything, which gives the movie what fun it contains, but Tomnay doesn't take enough advantage of the visual potential of the two realities occurring at once. We often get too much of Warwick's hallucinations, and too little of John's view of his host's interactions with thin air — the result, oddly, is that Warwick often doesn't seem quite as nutty as he probably should. 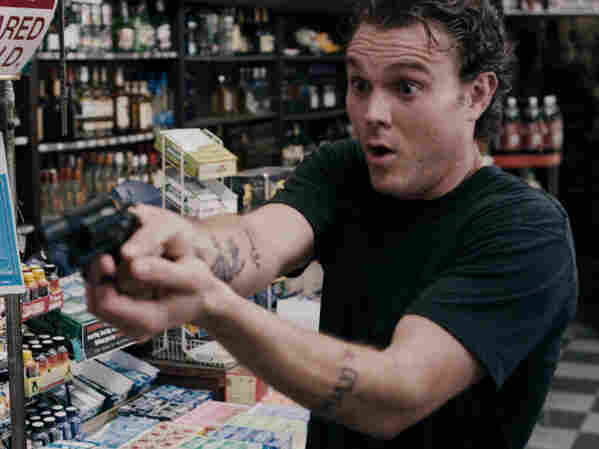 Seasoned criminal John Taylor (Clayne Crawford) holds up a bank and plots his escape meticulously, which makes it all the more improbable that he would allow himself to be rendered powerless by David Hyde Pierce. Magnolia Pictures hide caption 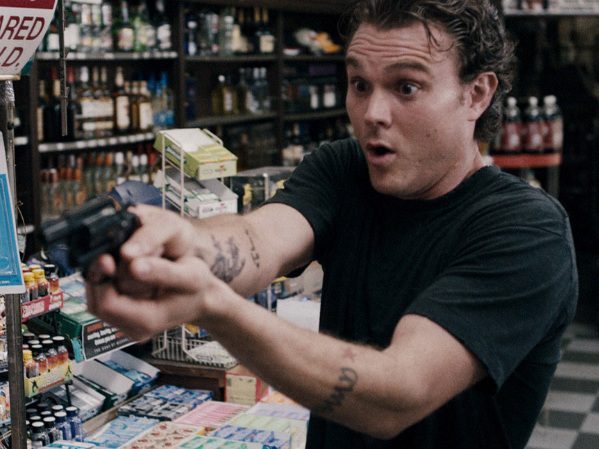 Seasoned criminal John Taylor (Clayne Crawford) holds up a bank and plots his escape meticulously, which makes it all the more improbable that he would allow himself to be rendered powerless by David Hyde Pierce.

For the reversal of fortune to really work, Tomnay needs to create real sympathy for John, who starts the movie not just as a small-time crook but also as a pretty cruel character. He gradually reveals a sympathetic back story in flashbacks, but he's mostly pitiable for a naivete that doesn't really feel in character for a career criminal, even one trying to get back on the straight and narrow.

That back story becomes important for reasons aside from making us feel for John, as it ends up central to the unexpected course of the movie's last half-hour. Tomnay takes a sharp turn away from the film's Misery-inspired tortured guest setup toward a complex, double-cross-laden Usual Suspects police procedural. Unfortunately, it becomes clear at this point that there really isn't enough material here for anything more involved than a short film. Expanded to feature length, the film piles on the twists seemingly because it has time to fill, padding the running time with tiresome cat-and-mouse games. Eventually, The Perfect Host ends up more like the guest who stays long past the time when he should have said goodnight.