Accessibility links
Changes In the American Community Create Gridlock In Washington Changes in the American community mean that we're increasingly surrounded by people just like us. Author Marc Dunkelman explains why that isolation makes us less open to compromise — and how marshmallows might help.

With Washington locked in a political stalemate over the nation's runaway debt, you might be wondering — once again — why can't we all just get along? Whatever happened to the art of compromise? 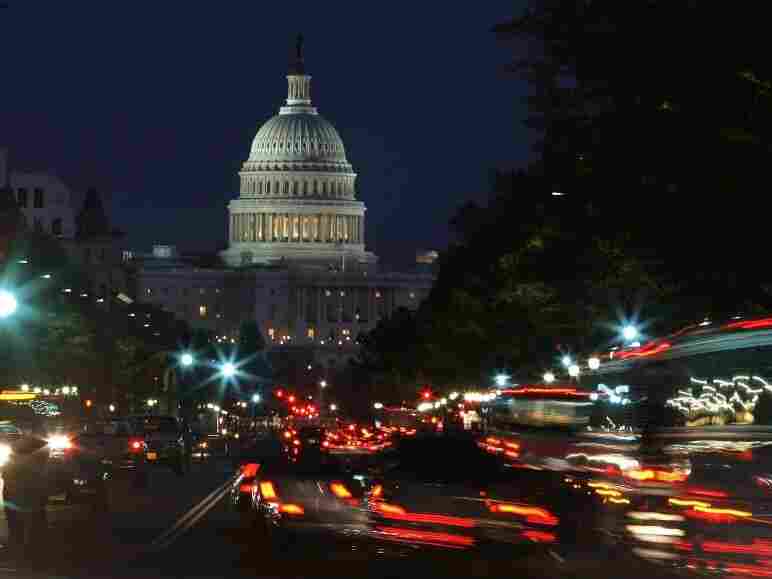 Author Marc Dunkelman has an intriguing answer. In a new essay in the journal National Affairs, he argues that our changing communities may be to blame. As they've been transformed by technology, globalization and a shift to a service-based economy, we've lost opportunities for broader social interaction with those whose points of view differ from our own. That has made understanding and collaborating with those of another political stripe or belief system increasingly difficult, says Dunkelman, a fellow at the Clinton Foundation and at the Johns Hopkins Center for Advanced Governmental Studies. NPR spoke with Dunkelman about his theory. Excerpts:

LIZ HALLORAN: You use Saturn as a metaphor for how Americans relate to their world. The planet's inner ring is composed of family and friends. The middle is work buddies and neighbors, and the outer ring might include someone who found you on Facebook, or maybe a like-minded stranger who follows the same blog or television show that you do. Americans have begun to ignore those in the middle ring, you say, a departure from the "township" architecture that had long characterized American communities. What has driven this, and can you give us an example?

MARC DUNKELMAN: Today, we are able to invest our time and energy more thoroughly and more exclusively in the relationships we prize the most. You might go on a business trip and be tempted to go down to the hotel bar and have a drink. Now, because of Skype, you can instead go up to your room and read Good Night Moon to your toddler. You might get to work, and instead of opening a paper to read something that everyone in town is reading, you read a blog from a commentator who expresses exactly your point of view. We all have a limited number of hours in the day, and our temptation is to invest in what I call the social bucket list — the 10 people you'd be most tempted to take with you on a desert island. What's being lost are those middle-ring relationships with folks who are friendly, but not close.

We all have a limited number of hours in the day, and our temptation is to invest in what I call the social bucket list — the 10 people you'd be most tempted to take with you on a desert island.

HALLORAN: You argue that earlier in our nation's history, bankers and firefighters, new immigrants from different countries, Democrats and Republicans interacted more than now. Might the opposite not be true, given the broad equalizing reach of technology, and that information once controlled by a few is now available to just about anybody?

DUNKELMAN: Certainly you can't argue that we're more segregated by race or ethnicity today than we used to be. But now you're much more likely to find yourself in a part of America where everyone is in the same socioeconomic pocket. Even if there's a diversity of race, even if there's a diversity of ethnicities, you're living among people who, for the most part, have the same economic interest.

HALLORAN: You say that the usual suspects often blamed for political gridlock are all vestiges of earlier eras — the media, gerrymandering of U.S. House districts, the Senate filibuster — and that the erosion of those "middle ring" relationships is really at the root of our current political gridlock. What can be done in the short and long term?

DUNKELMAN: The first step obviously is trying to identify what's happened. I think that the reason people in Washington are frequently unable to compromise is because their constituents from back home have a different character. They're coming from different sorts of communities. They aren't interacting with folks from the other side of the political debate as frequently in their everyday routines, and that makes it much more difficult to stomach the idea that their elected official would compromise on a solution that benefited both sides. There are indications that in parts of the country we're moving toward township community again. There's an urban design movement called the new urbanism that encourages pedestrian-friendly mixed-income communities that would make it more likely that people from different sensibilities would come together and at least share a cup of coffee.

HALLORAN: How do you propose building a nation of citizens?

DUNKELMAN: I think that there are a number of ways to do that. One, there's a lot of conversation these days about what they call the marshmallow test, which is testing 4-year-olds to see if they're able to withstand the impulse to eat a single marshmallow on the promise of a second marshmallow. Waiting for that second marshmallow is a better indication of whether they'll succeed in life than IQ or socioeconomic status. That is the crucial element that allows for a middle-ring relationship to bond.

HALLORAN: So you have to teach children to wait for that second marshmallow?

DUNKELMAN: If you look at a lot of education reform today, they're trying to provide students an environment where what you might call emotional intelligence can thrive — where you're able to withstand impulses, where you're able to really bear down and focus on things. That's just a crucial element of education reform and the crucial element that will allow us to build the middle-ring relationships that have been so crucial to American democracy.

HALLORAN: It won't help us right now in this debt-ceiling debate, but I guess when those marshmallow eaters move up and become our nation's leaders, maybe there will be more opportunities for understanding and compromise?

DUNKELMAN: That's right. Let's focus on a way to keep our fiscal house in order, and then we can worry about the marshmallows.