Accessibility links
Campaigning In South Carolina? Bring Your Appetite No matter who the candidate, it wouldn't be a South Carolina campaign without a visit to The Beacon Drive-In in Spartanburg.

It's officially summer vacation time. But if you're a candidate running for president, you'll spend your summer shaking hands in early voting states. Here, a look at the required stops and must-see attractions in The Palmetto State.

You better bring an appetite if you plan to court votes in South Carolina. And not any namby-pamby taste for sprouts and watercress. We're talking greasy fare, like you might find at The Beacon Drive-In in Spartanburg.

And know what you want when J.C. Stroble, 70, meets you at the counter with his signature "Call it!"

There's no paper or computer here — J.C. takes your order, then hollers instructions to cooks in The Beacon's unique lingo. For instance, a chili-cheeseburger a-plenty means your plate is going to be covered with french fries and onion rings.

The place goes through 300 pounds of chili on a Friday night. Just the kind of crowd a campaign is looking for.

"If you want to be elected for president, you better come to The Beacon," Stroble says with a chuckle. 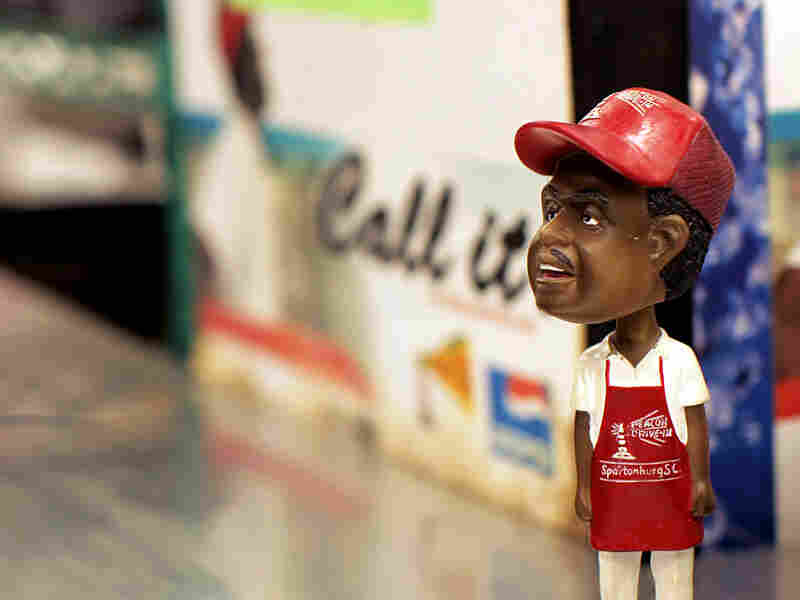 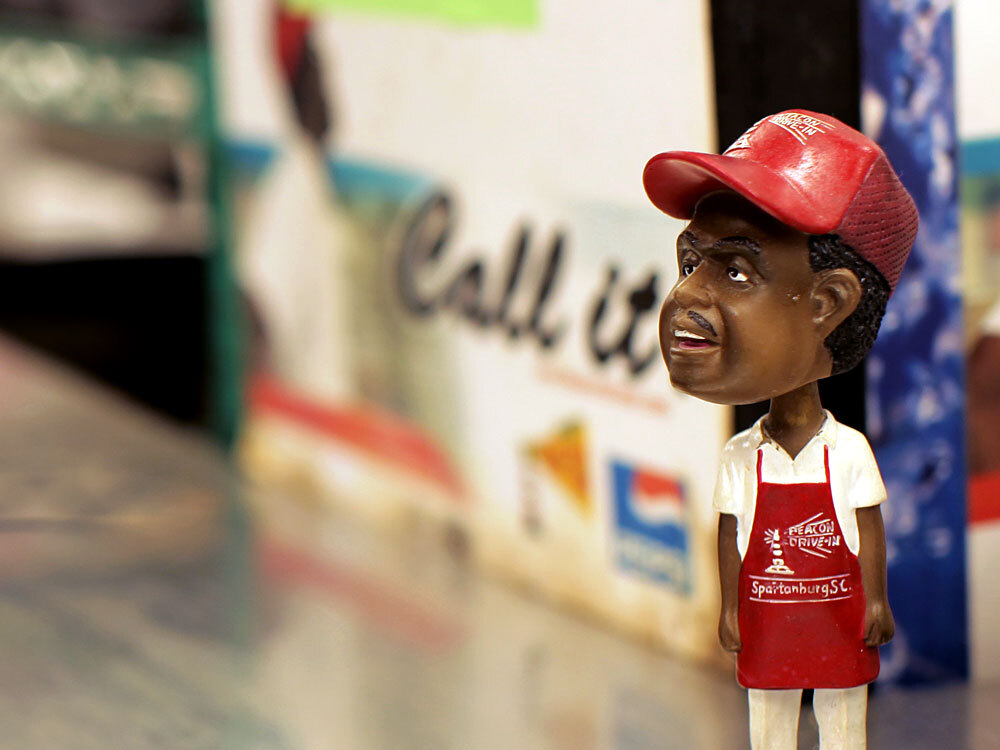 A small figurine of famed counterman J.C. Stroble is shown at The Beacon.

In more than a half-century of working here, Stroble has served up candidates from John Connally to Richard Nixon to Ross Perot. (And he can tell you what they ordered.) He says Strom Thurmond was a regular, and remembers putting peanuts out on the counter to welcome Jimmy Carter.

Stroble lost his eyesight years ago, but still keeps the line moving, Secret Service or not. He recalls when President George W. Bush stopped by for a cheeseburger a-plenty.

"You'd never know he was the president," Stroble says. "I said 'Give me a cheeseburger with a plenty and move on down that line.' That's the way you do it," Stroble says.

Beacon owner Kenny Church says Stroble is very comfortable with politicians. And politicos are apparently comfortable at The Beacon. Church says both the county Republicans and Democrats hold their monthly meetings here. And recently, the Tea Party had a big event, appropriate for a place that sells 6,000 gallons of tea a week.

"We didn't let them throw any of our tea away," Church says. "We kept it all in the store."

This is the second installment of Southword, a multimedia collaboration between Oxford American magazine and NPR spotlighting the people, places and trends that shape the modern American South. Dave Anderson, filmmaker for Oxford American, teams up with NPR journalists to produce stories about a region that continues to evolve in unexpected ways.

South Carolina's "first in the South" primary has a track record. The state has picked the eventual Republican nominee in every race since Ronald Reagan in 1980.

The parade of contenders for the Feb. 28 contest has already started, and they'll keep coming, particularly upstate around Spartanburg and Greenville, a region rich in conservatives.

Danielle Vinson, chair of the political science department at Furman University in Greenville has a little advice.

That's Bob Jones University, also in Greenville. The private Christian college has a longstanding reputation as a place to court religious voters. More than half of South Carolina's Republican voters are evangelicals. Ronald Reagan, Pat Buchanan and Bob Dole all campaigned on campus. But an appearance by George W. Bush in 2000 drew controversy.

"We conservatives, we who stand on conservative principles, have got compassionate hearts for the people who live in this country," he said at the time. But the compassionate conservative stump speech failed to call into question the college's ban on interracial dating (a policy since rescinded).

Candidates can also run into trouble stepping into the flap over the Confederate battle flag at the state capitol, or even raising the starter flag at Darlington raceway. In 1992, Bill Clinton targeted NASCAR voters there, but got booed and heckled.

Your best bet might be to stick with the food.

"They told me we were going to the ham house today," he said. "My eyes lit up, and dog-gone, they brought me in a fruit plate."

Owner Tommy Stevenson says the politics got a little porky when animal rights activists showed up during George W. Bush's visit in 2000.

"The PETA people came by in a dump truck, and dumped a load of pig manure in front of the driveway," he says. "It was three people in pink pig suits, and it was real comical to see them all in the back of a police car in handcuffs and in pink pig suits."

'You Better Not Spurn That Sweet Tea'

It's not only where you go and what you eat in South Carolina, it's also who you know. For the Republicans this year, Gov. Nikki Haley and Sen. Jim DeMint are the endorsements to have. But candidates are also calling local officials, like Greenville Mayor Knox White.

"I guess my favorite would be, George Bush Sr. called me when I was in the shower," White says.

Over breakfast at Tommy's Ham House, White says he used to envy all the attention that New Hampshire and Iowa got. But now, he's right in the middle of that same intense political experience.

He's taken a few calls this year, but "I guess I'm like most people," he says. "We're all just understanding the field and keeping our powder dry for now."

As he waits for the right candidate to emerge, White does have a little campaign wisdom to share.

"You better not spurn that sweet tea," he says. "You better at least take a sip or two."

Then smile, and say "thanks y'all."

In a previous version of this video, Beacon owner Kenny Church was misidentified as Mark McManus.