Accessibility links
What Went Wrong In Fukushima: The Human Factor Japanese officials already have concluded that the Fukushima Dai-ichi nuclear power plant was not designed to withstand the 40-foot tsunami that hit it on March 11. But different decisions early in the crisis might have reduced the accident's severity. 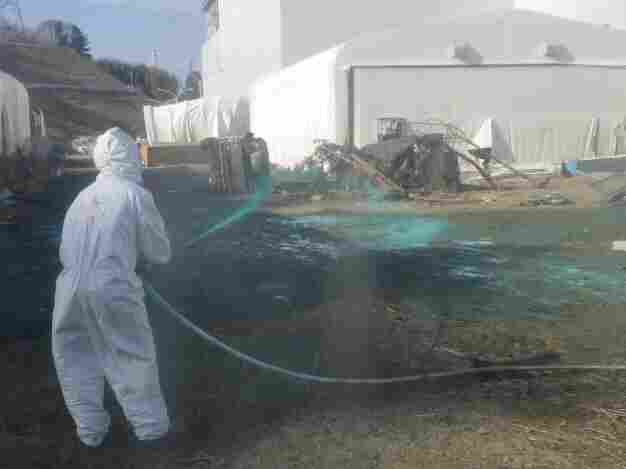 Workers at the Fukushima Dai-ichi nuclear power plant spray a substance to help reduce dust on April 1. Experts say it's likely that workers at the plant could have reduced the severity of the accident if they had made different decisions during the crisis. TEPCO hide caption

Japanese officials are still trying to understand all the factors that contributed to the meltdowns at the Fukushima Dai-ichi nuclear power plant.

Officials already have concluded that the plant was not designed to withstand the 40-foot tsunami that hit it on March 11. But it is also likely that workers at the plant could have reduced the severity of the accident if they had made different decisions during the crisis.

Some of the stories from the crisis seem heroic and at times, even quite creative. After the tsunami knocked out the power to the reactors and destroyed the diesel back-up system, plant workers fanned out into the plant's parking lot, which was full of wrecked cars.

"So people were out scavenging batteries out of cars and trucks," says Lake Barrett, a retired nuclear engineer who led the Three Mile Island cleanup. He says that workers brought those batteries into the control rooms, "wiring them with hot wires to the instrumentation to try to determine the water level in the cores, and to control the pumps they had."

Those desperate measures were clearly not enough. But why the heroics failed is not quite so clear.

The plant operators might have done something different if they had better information, better training or perhaps better guidance.

Some of the institutional issues have already emerged. Japan's own preliminary investigation showed disagreement and confusion over who should be calling the shots. Barrett says this was partly cultural.

One critical decision was whether to pump seawater into the reactors. That would certainly ruin them, but it could also keep them cool and prevent meltdowns. It appears that the engineers on site hesitated for some hours before they went ahead and did that. Per Peterson, chairman of nuclear engineering at University of California, Berkeley says that was a questionable decision.

"It's quite likely that if the injection of seawater had been initiated earlier, the damage of fuel could have been limited greatly or even prevented," Peterson says. "So I think there are possible pathways by which the severity of the accident could have been substantially less."

'Better Preparation Could Have Made A Big Difference'

Of course, it's easier to see that now than it might have been in the heat of a crisis.

"One has to look at the context of this severe natural disaster," Peterson says. "Many of the staff that were there, they were contractors who had left the site so that they could go to find their families. And so in that context, one can understand why the decision-making process perhaps did not roll out as well as it might have. But also, clearly, better preparation could have made a big difference here."

Preparing For The Worst

That's one area where Japan may have fallen short. Marvin Fertel, president of a trade group called the Nuclear Energy Institute, told a recent panel at the National Academy of Sciences that U.S. reactor operators get better training than their counterparts in Japan.

"What we like for the operators and the security guards when we're operating the plants is just boredom," he said. "Everything is just good. So the time we really want them to train and plan for bad events is when they're in a simulator."

These simulators mimic each specific nuclear power plant closely. That allows reactor operators to practice dealing with extreme emergencies as they would experience them in their own control rooms.

"In Japan," Fertel said, "we understand they: (1) do not have plant-specific simulators: they have generic simulators for the types of plant they have; and (2) they don't have one for every plant."

That means less-realistic training and less time to practice, Fertel said. Whether better training would have made a difference at Fukushima is something that should emerge from the ongoing investigation in Japan.