Accessibility links
Illinois, Catholic Agencies At Odds Over Gay Adoptions The state of Illinois is at an impasse with some faith-based agencies that provide adoption and foster care services with public funds. Now that civil unions are legal in Illinois, one Catholic Charities agency has dropped its adoption service altogether rather than place children with gay couples.

In Illinois, civil unions for gay couples became legal last month. Now, a battle is brewing over whether faith-based groups must change their practices and help gay couples adopt.

"There are all kinds of different families in Illinois, and we understand and love one another. We understand that it is very, very important to have civil rights and civil unions," Quinn says.

But the law allowing civil unions has put the state and some faith-based organizations at odds. Catholic Charities agencies in five Illinois dioceses, which had received state funds to provide foster care and adoption services, only placed children with straight married couples or straight single people who lived alone.

As the civil union law went into effect, Catholic Charities in Rockford, Ill., ended its adoption service over concerns that it would have to place children with same-sex couples or face discrimination lawsuits. Catholic Charities in three other Illinois dioceses put licensing any new prospective parents on hold and sued the state.

Peter Breen, executive director of the Thomas More Society, represents Catholic Charities in the dioceses of Joliet, Peoria and Springfield. "The idea that a religious entity needs to check its religion at the door when it takes state money is a false idea," Breen says. 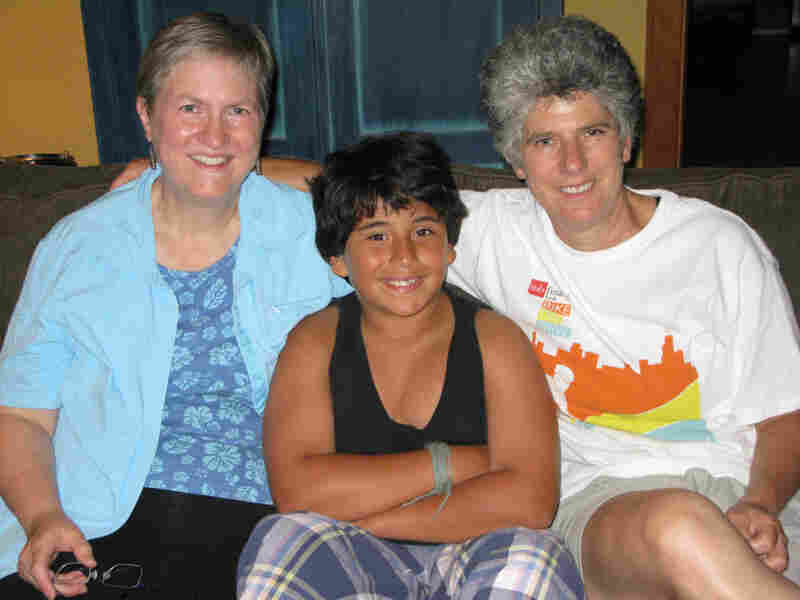 Nancy Matthews (left) and Lisa Frohman (right) traveled out of state to adopt their son, Eli. They say the new Illinois civil union law will make it easier for gay and lesbian couples who don't want to hide their sexuality as they try to adopt. Cheryl Corley/NPR hide caption

For decades, he says, Catholic Charities has referred unmarried couples — regardless of their sexual orientation — to other agencies or back to DCFS, the Illinois Department of Children and Family Services.

"If the theory behind civil unions is live and let live, then those folks who are for civil unions can also be for Catholic Charities, and other religiously based adoption agencies, to provide services to the state which are valuable. And [the agencies] can continue to do it without shutting down — without compromising their deeply held religious beliefs," says Breen.

"All agencies working for the Department of Children and Family Services must obey Illinois law," he says.

At the heart of the matter is whether this law allows a religious exemption. Breen argues that adoption is part of the church's mission. Yale University law professor William Eskridge says the court is likely to reject that reasoning.

"I don't know of any court decision that holds that ancillary services — including adoption services or, say, educational services — are part of the core religious mission," Eskridge says.

Catholic Charities in Washington, D.C., and Boston shut down publicly funded foster care and adoption services after gay marriage became legal. Eskridge says if the agencies are successful in Illinois, that could prompt legal fights elsewhere.

Civil Rights In The Household

"If this about the care of children, then that should be the focus. Being a qualified, loving person is not about your sexuality."

In their living room, college professors Nancy Matthews and Lisa Frohman are watching their 10-year-old son, Eli, as he downloads Iron Man 2 to their flat-screen TV.

The couple traveled out of state to adopt Eli. They say the Illinois civil union law will make it easier for gay and lesbian couples who don't want to hide their sexuality as they try to adopt. Frohman calls the Catholic Charities lawsuit frustrating.

"If this is about the care of children, then that should be the focus. Being a qualified, loving person is not about your sexuality," she says.

But, Matthews says, she can understand the conflict between deeply held principles and civil rights in American culture.

"Part of me just says, well, if they don't want to do it, someone else will take their place. But maybe, in some towns, there aren't other agencies doing this work, and that creates a problem," Matthews says.

The Catholic Charities in Illlinois that have sued the state say they want to continue to provide homes for children — but only by their guidelines. It will now be up to a judge to make that decision. The state's deadline to respond to the lawsuit is this week.