Accessibility links
What A Debt Default Would Really Mean For The U.S. There are just four weeks left to raise the federal debt ceiling or run the risk of a government default. That would leave the government, which now borrows more than 40 cents of every dollar, suddenly without a working credit card. Within 24 hours, the U.S. would rack up $20 billion in unpaid bills. 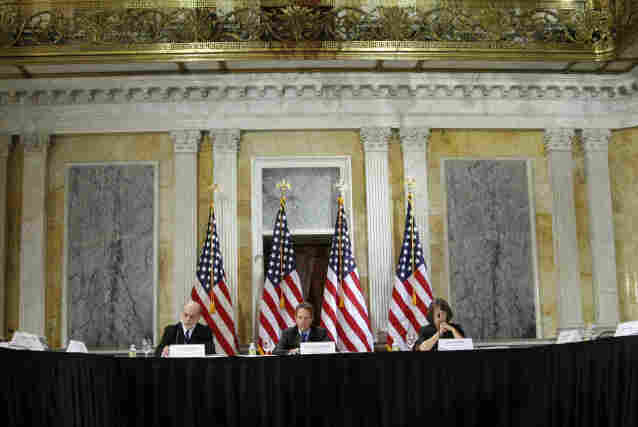 President Obama has invited Republican and Democratic leaders of Congress back to the White House on Thursday, for more talks aimed at cutting the federal deficit. He's hoping to forge an agreement within two weeks, which would leave time to raise the federal debt ceiling before an Aug. 2 deadline.

Unless the debt ceiling is increased, the government — which now borrows more than 40 cents of every dollar — would suddenly find itself without a working credit card.

"That means after Aug. 3, we'd be entirely dependent upon incoming cash flows to pay our bills," says Jay Powell, who served as undersecretary of the Treasury during the first Bush administration.

Powell, who is now a scholar at the Bipartisan Policy Center, looked at what would happen if the government had to operate like a shopkeeper, paying each day's bills with whatever cash is in the register.

"It doesn't balance very well at all," he says.

Trouble would begin as soon as the government exhausts its borrowing authority on Aug. 2. The next day, the government is expected to collect some $12 billion in taxes, but that wouldn't begin to cover the daily expenses.

"The problem is that $23 billion in Social Security payments are supposed to go out on Aug. 3," Powell says. "And there's a really good chance we don't have the cash to pay that."

In addition to Social Security, there are bills for Medicare and Medicaid, defense contractors, and federal workers who expect to be paid. Within 24 hours, the government would be $20 billion behind. And the delinquent bills would continue to pile up with each passing day.

Just as the government is trying to decide between stiffing Social Security recipients or active-duty military, a $29 billion interest payment comes due on Monday, Aug. 15. That's also the day that $27 billion worth of Treasury bonds mature.

Ordinarily, the government would sell new bonds to pay off the old ones. But in these circumstances, finding buyers might not be that easy. Treasury bonds would have lost their key selling point: a rock-solid reputation for safety.

"They're the Volvos of investment," says Jim Kessler of the Washington think tank Third Way. "To get people back into Treasury bonds, you're going to have to give them some sort of deal. And that deal is bad for taxpayers. It's bad for the economy."

To attract new buyers, the government would have to pay higher interest rates. And those higher rates would ricochet throughout the economy.

The stock market would drop and so would the value of the dollar, resulting in higher gasoline prices.

Third Way's Kessler estimates that even a short gap in the government's borrowing authority would slow economic growth by 1 percentage point, at an estimated cost of some 650,000 jobs. And while the default might be temporary, the damage would be lasting.

The U.S. can avoid these dire consequences, so long as Congress and the president can make a deal before the Aug. 2 deadline.