Accessibility links
The Nation: American History 101 For Bachmann Michele Bachmann continues to defend her statement that America's founding father's, including John Quincy Adams, worked tirelessly to end slavery throughout their lives. John Nichols of The Nation sets the record straight with this brief history lesson on who the founding fathers were and weren't. 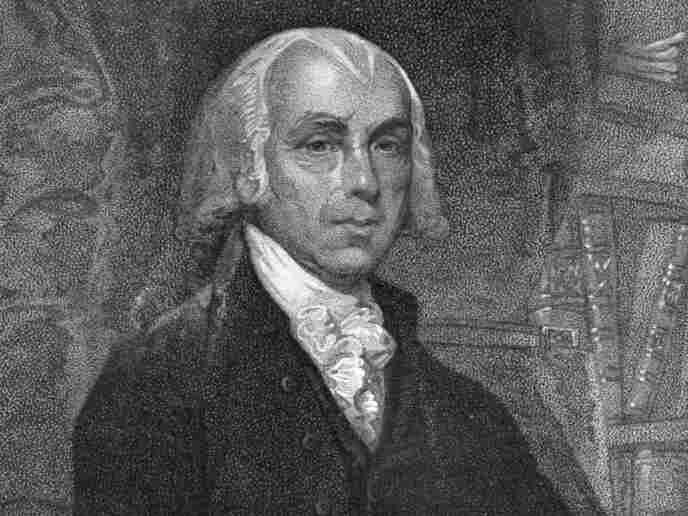 James Madison, the last of the founding fathers, died in 1836, 27 years before the issuance of the Emancipation Proclamation. Hulton Archive/Getty Images hide caption

John Nichols, a pioneering political blogger, has written the Beat since 1999.

The unsettling thing about Michele Bachmann's failed discussion of the founders and slavery is not that the Tea Party "Patriot" knew so little about the birth of the American experiment that she made John Quincy Adams — the son of a somewhat disappointing founder (John) and the cousin of one of the true revolutionaries (Sam) — into something he was not.

Bachmann has for some time peddled the notion that the nation's founding fathers worked "tirelessly until slavery was no more in the United States." She is simply wrong about this. The last of the revolutionaries generally recognized by historians as the founders — signers of the Declaration of Independence and the Constitution, and their chief political and military comrades — passed in 1836, with the death of James Madison. That was twenty-seven years before the Emancipation Proclamation was issued, and twenty-nine years before the finish of the Civil War.

Read Another Opinion On Michele Bachmann's Knowledge Of American History From The Weekly Standard.

But Bachmann has never been bothered by the facts. Until now.

As she has moved from the fringe of the House Republican Caucus — which late last year dismissed her candidacy for a minor leadership role — into serious contention for the Republican presidential nomination, she has finally begun to be called out on some of her more outlandish statements.

Noting that many of the founders were slaveholders, George Stephanopoulos asked Bachmann the other day on ABC News's Good Morning America to explain how she came to her distinctive view of the nation's founding. "Well, if you look at one of our founding fathers, John Quincy Adams, that's absolutely true," the Minnesota congresswoman chirped. "He was a very young boy when he was with his father serving essentially as his father's secretary. He tirelessly worked throughout his life to make sure that we did in fact one day eradicate slavery..."

In fact, John Quincy Adams was just a child when the Declaration of Independence was signed and just 21 when the Constitution was being cobbled together at a convention that agreed to a "compromise" that identified a slave as three-fifths of a human being. He did not sign either document. Nor did he participate in any significant manner in the debates regarding those documents — or the compromises contained in them — until the last years of his life.

John Quincy Adams was, like his father, a critic of slavery. But as a diplomat, Cabinet member and president, he was relatively cautious in his approach to the issue — fearing the divisions that an honest and thorough debate would stir. Only when he was in his mid-60s, after finishing his one term as president, did Adams emerge as an outspoken critic of human bondage. When he did so, his was a radical act of departure from the corrupt political consensus that allowed slavery to be maintained. Adams's courageous stance in opposition to states rights and in favor of a strong federal government with a commitment to liberty and justice for all is surely worthy of note.

But Bachmann got Adams's story wrong. And she refused to back off her error even when she was offered an opportunity to do so.

That ought to be troubling to anyone who takes seriously the detail and nuance of America's founding and the progression of the American experiment. But it is not the most troubling thing about her ignorance with regard to the history of the revolutionary moment and its aftermath.

The really unsettling thing about Bachmann's desperate struggle to explain away her errors and mischaracterizations is that, with a little effort, she could have gotten right the story of the fight over slavery at the point of American beginning.

There were, indeed, founders who objected to slavery. Thomas Jefferson tried to insert anti-slavery language into the Declaration of Independence, only to be rebuked by his fellow Southerners. Benjamin Franklin and Benjamin Rush were relatively active abolitionists, for instance. More significantly, within the founding circle, a genuine foe of human bondage risked his place among the elites to stand, again and again, at the side of the disenfranchised: slaves, Native Americans, the landless masses and women.

Tom Paine, the man who called the United States into being, did not just write Common Sense.

Historians suggest that it was Paine who encouraged Jefferson to include the anti-slavery clause in the declaration.

And historians know that Paine was a regular contributor to the great radical journal of the colonial era, the Pennsylvania Journal and Weekly Advertiser, which in 1775 published "African Slavery in America," the first article proposing the emancipation of African slaves and the abolition of slavery. In his time and to this day, it has been speculated that Paine wrote that pioneering article. Certainly, he associated himself with its values and ideals — particularly the declaration that: "Our Traders in MEN (an unnatural commodity!) must know the wickedness of the SLAVE-TRADE, if they attend to reasoning, or the dictates of their own hearts: and such as shun and stiffle all these, wilfully sacrifice Conscience, and the character of integrity to that golden idol."

Barely one month later, on April 14, 1775, the first anti-slavery society in the American colonies was formed in Philadelphia.

Thomas Paine was a founding member.

If Michele Bachmann wanted to talk about a founder who was on the right side of history, she could have done so.

But that would require her to do more than talk about American history. She would have to read it. And she would have to do so with an eye toward understanding America as a work in progress where there have always been debates between progressives, like Paine and his "winter soldiers" of the visionary American revolution, and the "sunshine patriot" conservatives who were — and are — too afraid, or too wrongheaded, to do right by their fellow human beings.