Accessibility links
Libyan Rebels Advance In The West While the front lines in the eastern part of the country have been static for months now, rebels in the west are making headway. The rebel offensive in Libya's western mountains has emerged as a threat to Gadhafi's hold on the capital, Tripoli, and other strategic cities. 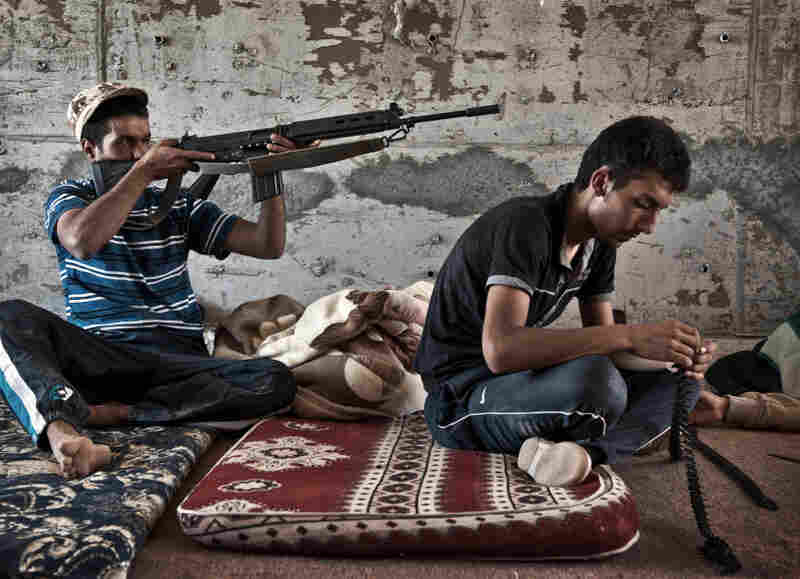 Libyan clean their weapons under a bridge near Bir Ayyad, a town approximately 25 miles from Zintan in the western mountains of Libya, on June 26. Colin Summers/AFP/Getty Images hide caption 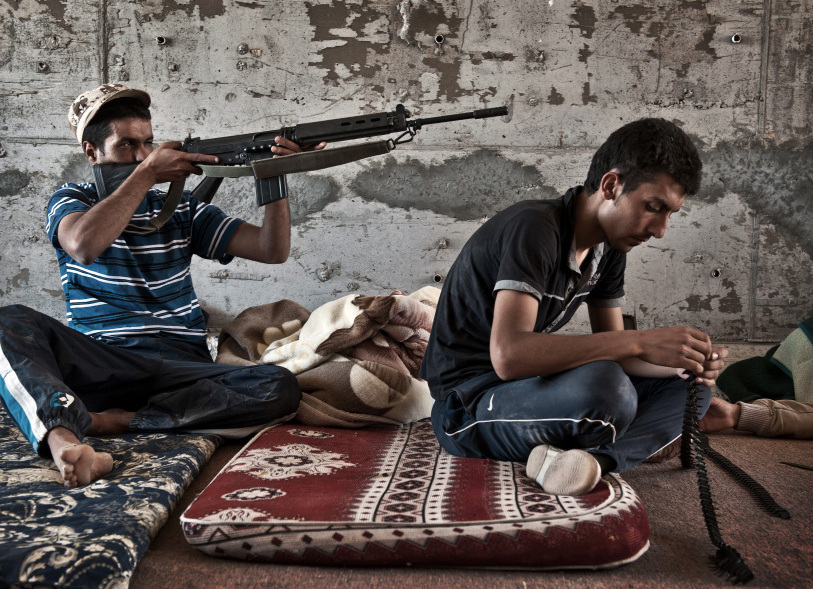 Libyan clean their weapons under a bridge near Bir Ayyad, a town approximately 25 miles from Zintan in the western mountains of Libya, on June 26.

Rebels in the mountains of western Libya captured another town Wednesday, bringing them one step closer to the capital, Tripoli. While the front lines in the eastern part of the country have been static for months now, rebels in the west are making headway, pushing back forces loyal to Moammar Gadhafi.

With cries of "God is great," rebels from the Nafusa mountains drove into the town of Gualish, celebrating their latest victory.

The battle began at dawn with both sides firing heavy artillery at the other. The rebels used tanks taken in previous battles, and Gadhafi's forces responded with Grad missiles.

But by afternoon, Gadhafi's troops had fled, leaving ammunition and, in some cases, vehicles behind.

Strategic Position Of The City Of Zintan

While much of the focus has been on the battles in the east and in the besieged western city of Misrata, the rebel offensive in the western mountains has emerged as a threat to Gadhafi's hold on Tripoli and other strategic cities like Zawiya, the site of a major oil refinery.

Moussa el-Dwayb, one of the rebel military strategists in the city of Zintan, says Gadhafi is concentrating his resources here now.

"Gadhafi realized that Zintan is more dangerous for him, and it is the key point of [Libya]," Dwayb says.

The rebels in this mountain range are fighting Gadhafi loyalists on three front lines — one near the town of Nalut, which is vital because it's the gateway to the Tunisian border where all the supplies to the western rebels come in.

The second front is in another town halfway down the road to the coastal refinery city of Zawiya, and the third is where the fighting was Wednesday.

The ultimate objective in this part of the battlefield is the city of Gharyan. Rebels say if they can capture it, they can then cut off the vital supply line from the south of Libya to the capital. With Wednesday's victory, they are now about 25 miles away from Gharyan.

In Zintan, members of the military committee pour over maps. Wednesday's attack on Gualish had been planned for several days; the rebel troops came at their target on three sides, with support from NATO warplanes.

While the rebel forces seem well-organized, they are still plagued with problems. The main one is how they coordinate with NATO, which is carrying out a bombing campaign in Libya. All contact with NATO goes through the rebel leadership in the eastern city of Benghazi.

"This is a problem. I don't know; I'd like to discuss this problem with the NATO people," says Col. Abdullah Mahdi, the head of the Zintan military committee.

Mahdi says it took days to get the go-ahead from NATO for Wednesday's offensive. NATO said it bombed a few loyalist positions around Gualish, but rebel commanders say they need more.

A Turning Tide Into Tripoli?

At least seven rebels were killed in the fighting Wednesday, and many more injured. At the hospital in Zintan, the wounded were brought in on stretchers, many with shrapnel wounds.

One 22-year-old fighter says he was shot by a sniper and then, when he tried to get away, ran into a minefield laid by Gadhafi's forces. At least six fighters were injured as two mines exploded.

From the top of the mountain, we can see Tripoli and the rest.

Human-rights organizations have decried the use of mines because they often end up killing civilians long after the battle ends. Gadhafi's forces have apparently laid many in areas they have retreated from.

Taha Mahmoud, one of the front line doctors, says he had been working for an oil company. "I [was] dealing with minor traumas," he says. "But now I am working as a war surgeon here."

He's seen people killed and maimed by missiles and mines, but he wants the rebels to push into Tripoli, no matter how unrealistic that seems.

"From the top of the mountain, we can see Tripoli and the rest," he says.

Now that that the tide has turned, he says, the people of Zintan want to pay Gadhafi back.

France Says It Parachuted Arms To Libyan Rebels June 29, 2011
With Lights, People In Eastern Libya Press For Help May 23, 2011