Accessibility links
'Weeds': In Defense Of Botany's Cockroach Many of us see weeds as a pest, but nature writer Richard Mabey prefers to think of them as "vegetable guerrillas" and "forest outlaws." Mabey stands up for the incredibly adaptable and disreputable plants in his new book, Weeds. 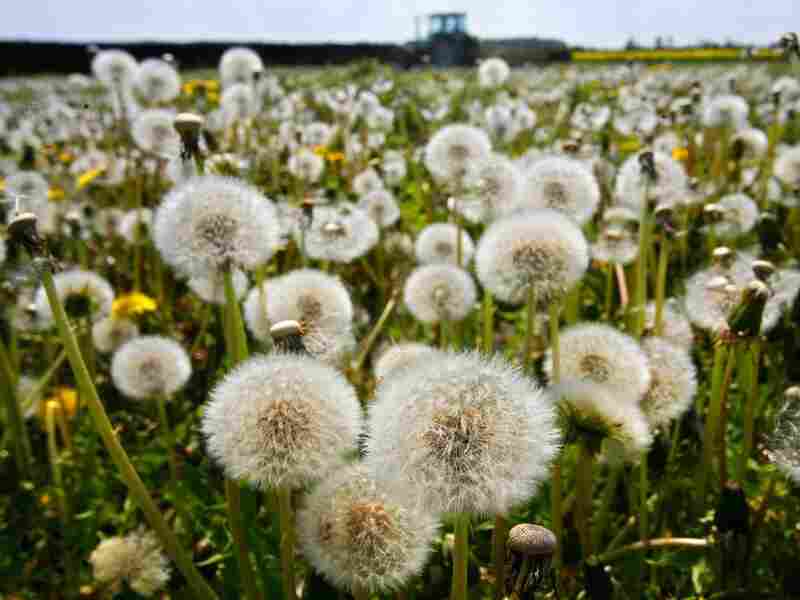 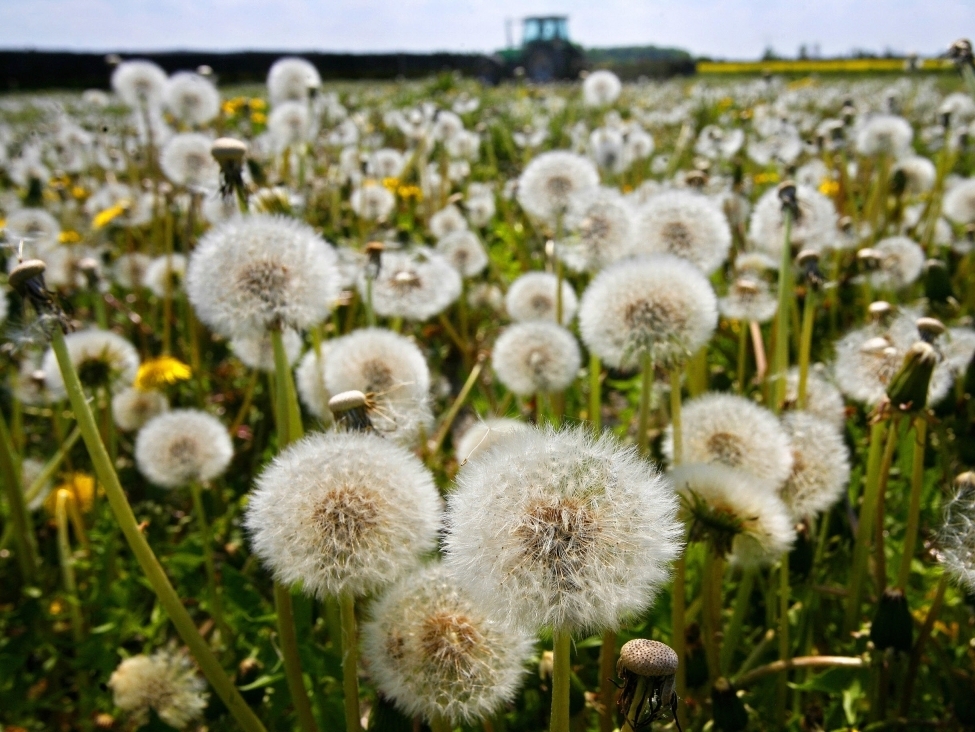 Nature writer Richard Mabey says dandelions — along with many other weeds — were inadvertently brought to America by European farmers.

In an alley just around the corner from NPR's studios in Washington, D.C., you'll find an impressive array of plant life. Plantain, chickweed, spurge, thistles and even nightshade thrive among the empty cigarette packs, trash and broken glass.

That's right — they're weeds, and they're everywhere.

And while many might think of them as pests, British nature writer Richard Mabey prefers to think of them as "vegetable guerrillas" and "forest outlaws." Mabey's new book, Weeds: In Defense of Nature's Most Unloved Plants, is a spirited defense of weeds. He tells NPR's Melissa Block that his love for weeds began when he discovered a forest of the disreputable plants in an industrial wasteland near London's Heathrow Airport.

"There was buddleia from Southeast Asia; there was Japanese knotweed from much the same area; giant hogweed; enormous 18-foot-tall umbellifer from the Caucasus," Mabey recalls. "It seemed to me profoundly inspiring that this kind of post-industrial wasteland was actually producing this growth. It seemed to say something about the obstinacy and resilience of nature." 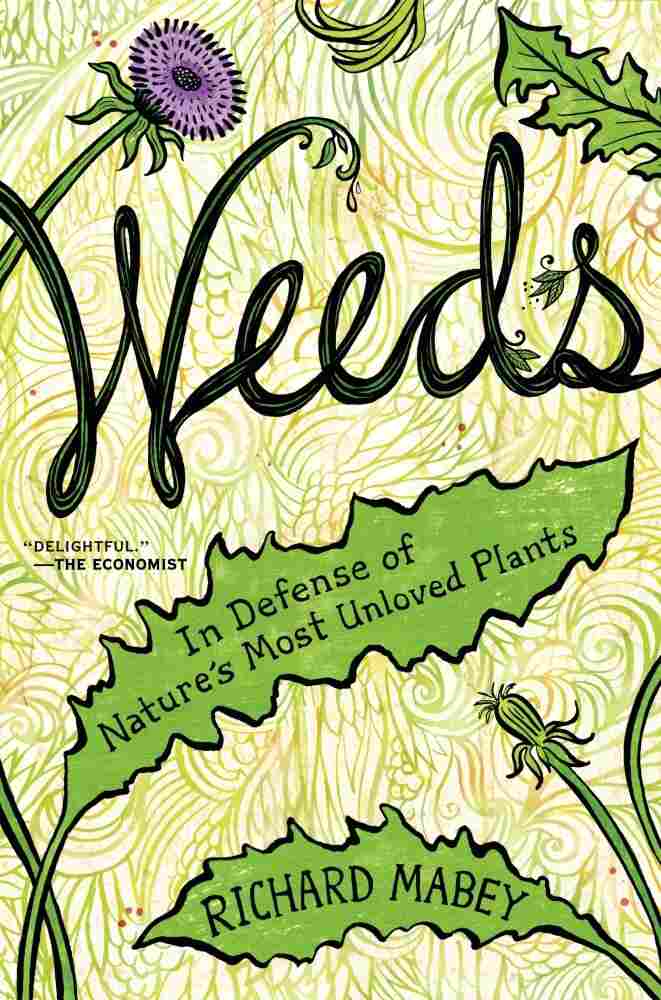 Weeds have a history of surviving everything from the passing of millennia to World War II bombings. Just consider the weeds that thrived in the rubble of London after World War II.

"About two miles away from the very center of the blitz in London — maybe some 70 years before — there'd been a big excavation and archaeologists and botanists had moved in and they were able to reconstruct from the layers of central London what vegetation had flourished in London maybe 20,000 years ago," he says. "And it was precisely the same as had come up after the bombing."

Those historic weeds are the very same ones gardeners battle with today: plantain, chickweed, dandelions, field poppies, buttercups and horsetails.

Killing 'The Beast' Is Not So Easy

One weed that needs no introduction — at least not to gardeners — is bindweed, a plant Mabey describes as "one of the most wily."

"The number of things that bindweed is capable of doing are really quite awesome," he says. "If you actually try to cut it up, which is what gardeners very often do when they're hoeing bindweed — they think, 'Aha ... we'll kill the beast! Lam it with a hoe and cut it into a hundred pieces' — you've simply created another hundred bindweed plants because each one of those little cuts ... can produce a new mother plant."

According to Mabey, bindweed is so set on survival that it can find its way out of a maze inside a black box with only a pinprick of light.

With a plant that crafty, there's no wonder that it's won Mabey's respect. After all, he says, weeds deserve some thoughtful consideration. 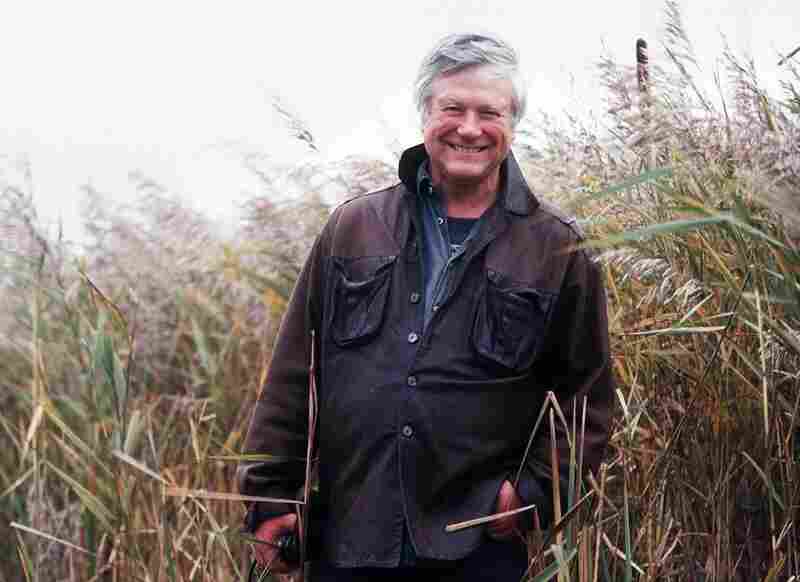 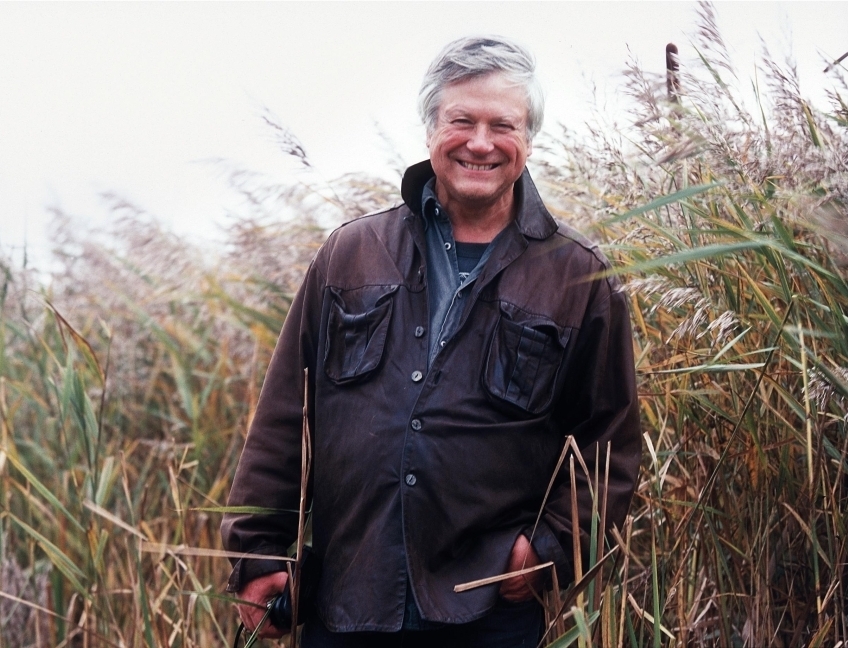 Richard Mabey is a writer, naturalist and frequent contributor to BBC radio and television.

"In earlier agricultural periods, people understood the relationship between what they did and the growth of the weeds that resulted," he says. "I think we've lost that because we're so distanced from plants generally. ... Why is this weed here? What is it doing? I think if one can reach those two areas, then the response to [weeds] can be much more intelligent."

And an intelligent response from one intelligent species to another is just what the situation calls for — especially considering whom Mabey believes the lowly plants are most like.

"Weeds, as a type, are mobile, prolific, genetically diverse. They're unfussy about where they live, adapt quickly to environmental stress, use multiple strategies for getting their own way," Mabey writes in his book. "It's curious that it took us so long to realize that the species they most resemble is us."

Plants become weeds when they obstruct our plans, or our tidy maps of the world. If you have no such plans or maps, they can appear as innocents, without stigma or blame. My own discovery of them was my first close encounter with plants, and they seemed to me like a kind of manna.

I was in my mid-twenties, and working as a publisher's editor in outer London. The job entailed a daily commute from my home in the Chilterns to the urban hinterlands, and I relished the paradox involved in journeying from the sedate order of Home Counties countryside to the wildness of the city. Penguin Books' education division was no belles lettres salon, shaded by reflective plane trees. It had been established to pioneer a new kind of textbook, and lay in a defiantly untraditional landscape a mile north of Heathrow airport. This was the Middlesex borderlands, a huge area of wasteland being slowly overtaken by hi-tech industry. Below my office window, the Grand Union Canal wound its flotsam-strewn way towards London, fringed by immigrant plants from three continents. To the west lay a labyrinth of gravel pits, now flooded, and derelict refuse tips whose ancestry went back to Victorian times. They were regularly raked over by bottle collectors, as if they were on the edge of a Third World slum. Northwards our parish frayed into a maze of breakers' yards and trailer parks, where the top predator was the German shepherd guard dog. The whole area was pocked with inexplicable holes and drifts of exotic litter. And most thrillingly to me, it was being overwhelmed by a forest of disreputable plants.

The work I was involved with chiefly concerned developing books on current affairs and social studies for school leavers. 'Relevance' was the fashionable touchstone. The books (more like magazines, really) had what we hoped were accessible but politically challenging texts, and were designed for a readership whose world was in a constant state of edgy flux. When I looked out of the window at the waves of riotous greenery, that world already seemed to be coming our way, fast.

There was nothing pretty or charming about this vegetation, no echo of the wild flowers of the English pastoral — or of England itself, for that matter. But it pulsed with life — raw, cosmopolitan, photosynthetic life. On the tumuli of the old tips, forests of noxious hemlock shot up through the detritus. Indian balsam, smelling of lavatory cleaner but alive with insects, blanketed the thrown-out bottles. Thirty-foot high bushes of buddleia from China towered above the layered sprays of knotweed from Japan, magenta-flowered everlasting-pea from the Mediterranean and the exquisite swan-necked blooms of thornapple, a weed now so spread about the world that its original home is unknown. Beneath them a galaxy of more modest weeds tricked out the compacted layers of plastic and glass that passed for soil. Wormwood, the source of absinthe; three species of nightshade; the horseshoe leaves of coltsfoot; bristly oxtongue, a weed whose scabby leaves looked as if they were afflicted by industrial acne. And strange tuftings that one might see growing wild together nowhere else in Britain except these abandoned places: cumin, feral gourds, fuller's teasel. There was an aura of fantasy about these plants, as if the incantation 'wasteland' made anything possible.

I wandered through this ragged Arcadia in my lunch hours, amazed at its triumphant luxuriance, and feeling, in a naively romantic was, that its regenerative powers echoed the work we were trying to do inside. The plants felt like comrades in arms, vegetable guerrillas that had overcome the dereliction of the industrial age.

This was my entrée into the world of plants, and it has permanently shaped my attitude towards those species usually vilified as weeds. I'm inclined to offer them a second opinion, to wonder what positive features we might glimpse in their florid energy. But I accept that my sixties passion for those Middlesex prodigies was eccentric and probably irresponsible. They were, by most standards, the worst possible kinds of weeds. Many were escapees and trespassers. They had broken out of the disciplined constraints of ornamental gardens and pharmaceutical company farms and were running amok. Several were profoundly toxic. At least two subsequently became so invasive that they're now on a blacklist of species which it's illegal to 'plant or otherwise cause to grow in the wild'. But with weeds context is everything. Any plant growing in such shabby surroundings becomes a weed. They're the victims of guilt by association, and seen as sharing the dubious character of the company they keep. If plants sprout through garbage they become a kind of litter themselves. Vegetable trash.

Given the impact of weeds on the planet, it's not always obvious that they are plants whose reputation — and therefore fate — is, in the end, a matter of this kind of personal judgement, that it's in our gift to demonise or accept them. Ever since Genesis decreed 'thorns and thistles' as a long-term punishment for our misbehaviour in the Garden of Eden, weeds have seemed to transcend value judgements, to be ubiquitous and self-evident, as if, like bacteria, they were a biological, not a cultural, category. For thousands of years they've strangled crops and broken backs. In the medieval period they caused outbreaks of mass poisoning, and were given names that suggested they were the Devil's spawn. Today, despite annual chemical drenchings that massively exceed those applied for insect pests, they still reduce arable productivity by 10 to 20 per cent.

And they become more problematic by the year. Across the world global trade has introduced a whole new class of cosmopolitan freeloaders. Striga is a pretty but parasitic snapdragon, whose blossoms in its native Kenya are used to strew across the paths of visiting notables. In 1956 it found its way to the eastern United States, where it has since reduced hundreds of thousands of acres of corn to stubble. Japanese knotweed was introduced to Britain in Victorian times, as an elegant shrub for the woodland garden. In not much more than a century we've become blind to its delicate flower tassels and gracious leaf sprays, and now regard it as the most dangerously invasive plant in the country. The current estimate for clearing it from the Olympic site in east London is £70 million. None of these outlaw species have changed their identities in graduating as weeds, just their addresses.

Yet even in these two examples the ambivalence and instability of the weed blacklist is clear. The ornamental in one place becomes the malign invader in another. What had been a crop or a medicine, centuries ago, falls from grace and metamorphoses into a forest outlaw. And just as readily the weed is domesticated into a food plant or a children's plaything or a cultural symbol. Mealy leaved fat-hen has been through all these cultural mutations. It migrated from its wild home on the seashore to haunt the middens of Neolithic farmers, from which it was later moved into rough-and-ready cultivation for its oily seeds. Then, as tastes changed, it became a loathed infestation of crops such as sugar beet (to which, ironically, it's related) only to return to partial favour amongst modern foragers.

Of course, 'it all depends what you mean by a weed'. The definition is the weed's cultural story. How and why and where we classify plants as undesirable is part of the story of our ceaseless attempts to draw boundaries between nature and culture, wildness and domestication. And how intelligently and generously we draw those lines determines the character of most of the green surfaces of the planet. 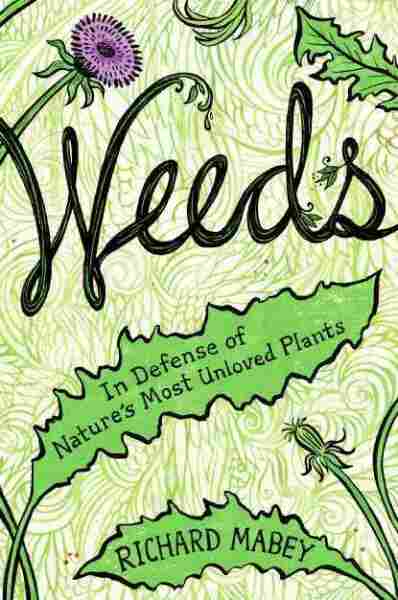 In Defense of Nature's Most Unloved Plants