Accessibility links
Some Russian Voters Happy To Back Status Quo It's no secret that President Dmitry Medvedev and Prime Minister Vladimir Putin will essentially decide the winner of March's presidential election, depending on whose name goes on the ballot. Why aren't more Russians pushing for change? It seems like for some, that would just mean chaos. 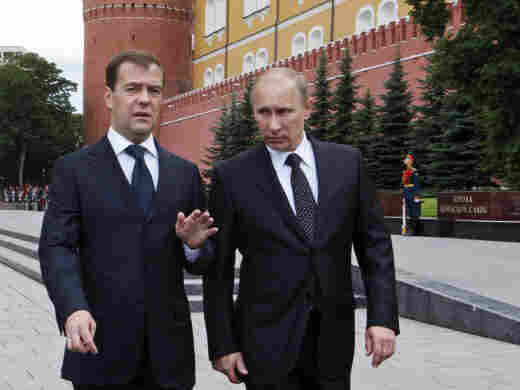 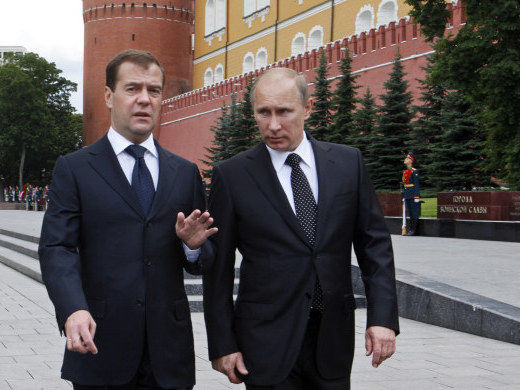 President Dmitry Medvedev (left) and Prime Minister Vladimir Putin walk after a wreath-laying ceremony at the Tomb of the Unknown Soldier outside Moscow's Kremlin Wall.

Sixteen months out from the 2012 election, U.S. presidential campaigns are already in hyperdrive. There have been debates, stump speeches and attack ads, and the candidates are obsessed with winning over voters.

Russia also has a presidential election next year, but it's a very different kind of democracy. Russia will choose a president sooner, in March, but right now there's no visible campaign. And it's no secret that President Dmitry Medvedev and Prime Minister Vladimir Putin will essentially decide the winner behind closed doors.

Russia is like the U.S. in one way, though: For a true sense of what people are thinking, it's better to leave the capital.

Two hours outside of Moscow, in the industrial city of Tver, Russians have their own opinions about the state of their democracy, and what should — or shouldn't — be done about it.

Tver isn't just a railroad town; it also builds the railroad. The town's pride and joy is a sprawling factory that produces rail cars.

Mikhail, a 42-year-old who would give only his first name, works in that factory. He says he sleeps better the less people know about him.

It's better to have someone who is tested, or else someone new will come along and start making a mess.

Mikhail sounds like a holdover from Soviet times, and in many ways he is. He still lives in the apartment assigned to him by the Soviet government, so there's no rent or mortgage. Mikhail supports his wife and two daughters making $700 a month building rail cars. Life isn't easy, but Mikhail says he lives by a lesson: Change can only be for the worse.

So in this March's presidential election, he's happy to support the status quo, either by re-electing Medvedev or voting for Putin. It's just a matter of those two men deciding which name goes on the ticket.

"If I could, I would vote for both of them. It doesn't make sense to vote for anyone else. It's better to have someone who is tested, or else someone new will come along and start making a mess," Mikhail says.

Little Opportunity For The Opposition

Chances are that nobody new is coming along. Putin, who served eight years as president before stepping down, is considering a comeback. As for Putin's protege, Medvedev has been mum about his plans. The assumption is the two of them will decide together who gets the nod.

As for anyone else? The government routinely bars opposition parties, and organized rallies are against the law unless sanctioned by the government. So whoever jumps on the ballot — Putin or Medvedev — is expected to coast. That doesn't sit well with everyone.

A 28-year-old named Pavel, who feared that giving his last name in an interview would get him punished at work, says Russia's leaders have done little to brighten the future for young people.

Pavel does not live in Soviet-era housing and says he has a costly mortgage on his apartment because the government lets interest rates climb out of control. He works as a government veterinarian but says he has to drive a cab on the side to survive. He could make a statement at the ballot box, he says, if Russia had a truly fair election. Instead, opposition leaders who might speak for him are blocked out.

Here, these people are in power too long, and they're starting to get brazen.

As much as people like Pavel want change, though, something has kept Russia from exploding with outrage. Everyone has his own explanation: Maybe too many people fear the authorities, or maybe enough citizens are satisfied with their wages and the state of Russia's economy.

Whatever it is, Russia probably won't see full-scale demonstrations for democracy until people like Julia Repich are driven to act.

Repich is a 35-year-old chef at a restaurant in Tver that plays American country music. Repich herself spent years in the U.S. attending cooking school and tasting American democracy before returning home to be with family.

Repich said the idea of a real election in March is a farce. Yet these days feel stable, compared with the tumult at the end of Soviet times. So she's happy to support Putin or Medvedev and isn't interested in joining some opposition group.

"It's [nicer] to just go to work and take care of my family and [that's] just it. I think we don't have any time for this," she says.

No time, she says, for a pro-democracy movement that might only create chaos.