Accessibility links
Drug Cartels Prey On Migrants Crossing Mexico Illegal migration from Mexico and Central America into the U.S. has fallen recently. But those who do cross Mexico face an even more dangerous journey amid that country's drug war. Attacks on migrants have increased dramatically. One Honduran man says he had to pay a $3,000 ransom for his life. 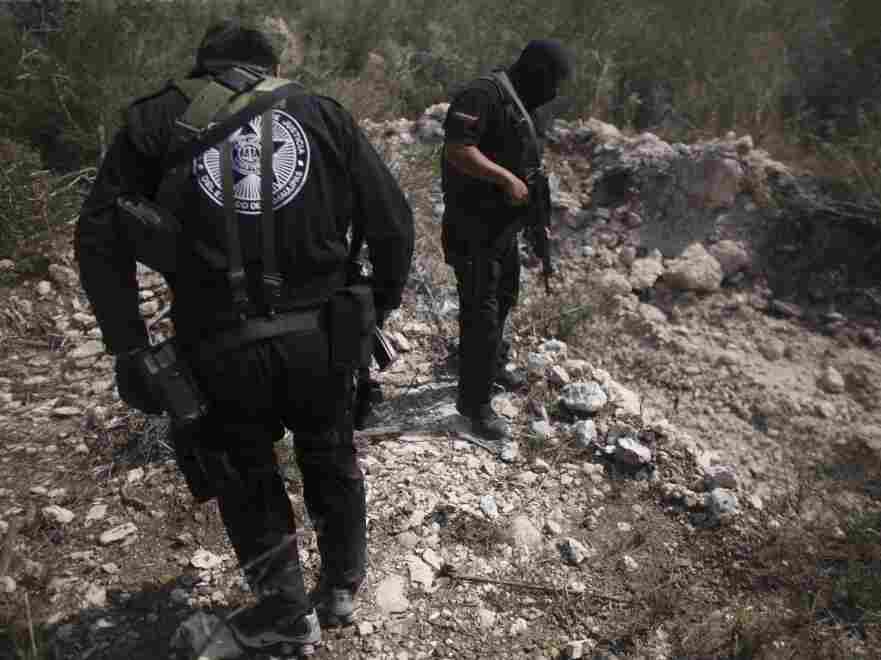 Police officers stand next to a hole they say was used as a mass grave near San Fernando in the Mexican state of Tamaulipas in late April. Almost 200 bodies were found that month in Tamaulipas. Prosecutors believe the killings were carried out by members of the Zetas drug cartel. Alexandre Meneghini/AP hide caption 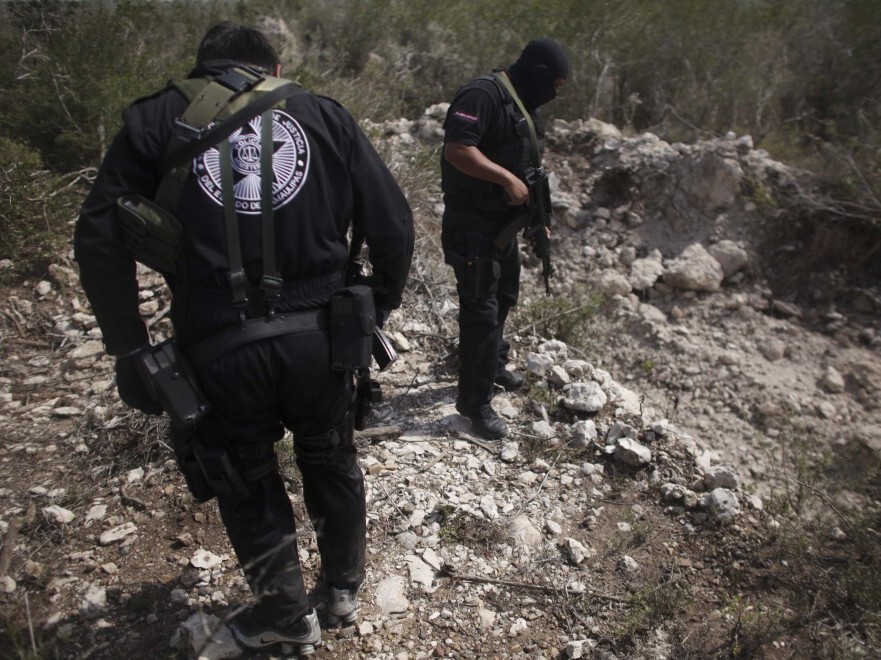 Police officers stand next to a hole they say was used as a mass grave near San Fernando in the Mexican state of Tamaulipas in late April. Almost 200 bodies were found that month in Tamaulipas. Prosecutors believe the killings were carried out by members of the Zetas drug cartel.

If there's one place that has come to illustrate the perils confronting the hundreds of thousands of migrants crossing Mexico in an attempt to reach the United States, it's San Fernando in the Mexican state of Tamaulipas.

Last year, 72 migrants were massacred on a ranch in that town. A wounded survivor from Ecuador led Mexican soldiers to the victims' bound and bullet-riddled bodies. This April, authorities found almost 200 more bodies in a series of mass graves. Many of them are also believed to have been migrants.

In recent years, the number of migrants estimated to have crossed into the U.S. from Mexico and Central America has fallen sharply. But the journey of those who do cross, which was always perilous, has become even more dangerous as Mexican drug cartels strengthen their control over the smuggling, kidnapping and extortion of migrants.

The Changing Rate Of Migration

The Mexican government's estimate of the number crossing the country's northern border to seek work in the U.S. fell from 1 million in 2005 to roughly 400,000 last year.

Jeff Passel, who studies migration at the Pew Hispanic Center in Washington, says historically the primary factor driving or dampening migration into the U.S. has been the availability of jobs.

MAP: A Perilous Journey Across Mexico

"The big ups and downs are associated with, basically, the U.S. unemployment rate," Passel says.

But over the past four years, there have been several other factors thrown into the migration equation. The U.S. has beefed up the Border Patrol and built hundreds of miles of fence along the frontier with Mexico. Smugglers have been forced out into more remote, difficult terrain, and their fees have gone up accordingly.

Mexico also has gotten far more violent as a result of the drug war, and attacks on migrants have increased dramatically. Passel says all of this is affecting the flow of migrants.

"If you're sitting in Mexico and trying to decide whether to come to the United States, and [you] know that it's going to cost you several thousand dollars and it's dangerous, but it's going to be very hard to get a job, you're much less likely to come," Passel says.

There's anecdotal evidence in Mexico that the flow of migrants is starting to rebound, however. Priests at migrant shelters in southern Mexico say over the past few months an increasing number of people have passed through their doors.

San Fernando, where migrants were massacred and the mass graves were found, is a small but important city on the road between the interior of Mexico and the Texas border, says Mayor Tomas Gloria Requena.

"We are in a location that migrants have to pass through," he says. "Unfortunately, we also don't understand how something like this could occur."

The mayor says local government officials don't know when migrants are passing through. And even if they did, he says, San Fernando doesn't have the resources to protect them.

"This is not in our hands. These are international phenomena that unfortunately have affected us because of the strategic [geographic] position we are in," Requena says. 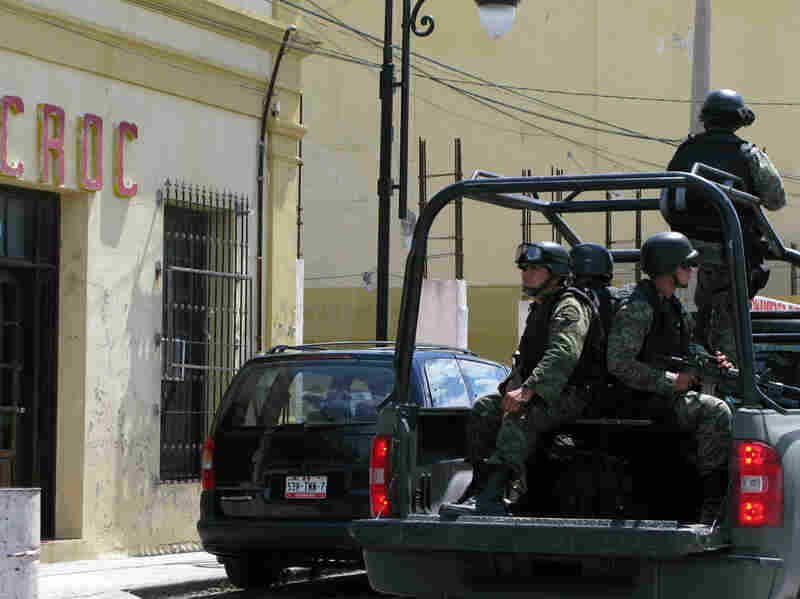 Mexican soldiers have taken control of the police department in downtown Matamoros, in the border state of Tamaulipas. Jason Beaubien/NPR hide caption 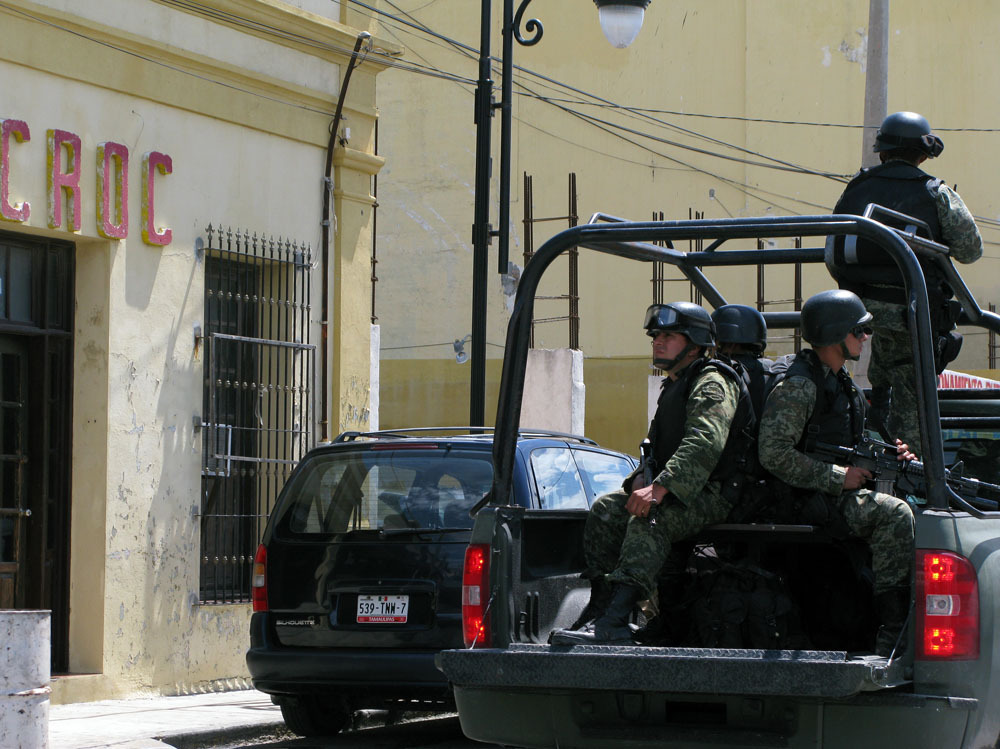 Mexican soldiers have taken control of the police department in downtown Matamoros, in the border state of Tamaulipas.

However, serious questions have been raised about the degree to which local police were involved in the abuse of migrants in San Fernando. Prosecutors believe the killings were carried out by members of the Zetas drug cartel. More than half of San Fernando's police officers were also arrested and sent to Mexico City for questioning over the massacres.

Now, Mexican soldiers with machine guns mounted on pickup trucks are in charge of security in San Fernando.

Over the past two years, the Zetas have strengthened their grip over the Gulf Coast states of Tamaulipas, Veracruz and Tabasco. Cartel gunmen set up their own "checkpoints" on the highways. They hijack buses, assassinate local politicians, run extortion rackets and fight raging street battles with their rivals.

The Zetas also have seized control of human trafficking routes, charging smugglers and migrants even for the right to swim across the Rio Grande.

In The Hands Of Kidnappers

Jose Paz, a 25-year-old from Honduras, was kidnapped last year by gunmen who said they were Zetas. He says he was tied up for seven days.

Paz says he was grabbed by armed men while he was waiting to board a freight train in Tabasco. The gunmen took him to a forest where about 150 other migrants were being held.

"We were tied up with our shoelaces. Our feet were tied and everyone was face down on the ground," he says.

Paz says the kidnappers were highly organized, had powerful assault rifles and laid out a simple proposal: You pay or you die.

"They killed three people who didn't pay them the money. They brought them in front of us and they killed them," he says.

The gunmen were demanding that each migrant get thousands of dollars wired into a local bank account, Paz says. The hostages were ordered to call relatives in the U.S. or back in Central America to arrange a wire transfer. While the migrants were on the phone, the kidnappers would beat them or threaten to cut off their fingers, Paz says, to make it clear to the person on the other end of the line that they were serious.

"My buttocks were black, they hit me so many times," Paz says. "And this ear ... they threatened to cut it off. ... They didn't have a knife and they tried to cut it off with fingernail clippers."

They killed three people who didn't pay them the money. They brought them in front of us and they killed them.

His description of how this kidnapping operation functioned is similar to accounts from other migrants, human-rights activists and local news media.

Paz says after he had paid, the gunmen took a group of them back into town, and during the drive they were waved straight through a police roadblock. Then the kidnappers offered their hostages another proposal: Those who wanted to keep going north toward the U.S. border could run for the railroad tracks; those who wanted to get deported home were handed over to Mexican immigration officers.

"Here, it's all one huge alliance. The criminals, the migration officials, the police — they're all working together," Paz says.

Paz managed to get to Texas but was later deported. And despite his brutal ordeal last year, he says he'd rather attempt this risky journey again than be stuck in Honduras.

A 'Problem With Impunity'

Officials with Mexico's National Migration Institute, the government authority in charge of migration, refused repeated requests for an interview for this story.

Migration agents who weren't authorized to speak to the media say they're trying to control the flow of illegal migrants across Mexico, and at the same time protect the migrants. They insist that only a small number of officers are corrupt or aligned with the kidnapping gangs.

In May, seven top officials at the agency were fired over allegations that agents were handing migrants over to the cartels.

Mexico's Human Rights Commission reports that more than 20,000 migrants were snatched in 2010. Fernando Batista, with the commission, says Mexican officials at all levels of government, from local cops to regional migration administrators, have been involved in the abuse of migrants.

"In Mexico we have a serious problem with impunity," Batista says. "Some studies show that for every 100 crimes, only five are presented before a judge, and then who knows what happens with them in the courts. But if we continue with this level of impunity, it's going to be very difficult to address events like these."

Mexican legislators say they're trying to address the dire situation for migrants. In May, they passed new federal legislation declaring that the human rights of migrants will be respected.