Accessibility links
Jose Antonio Vargas: On Coming Out As An 'Undocumented' Immigrant Jose Antonio Vargas, a Pulitzer Prize-winning reporter, recently revealed he has been living in the U.S. illegally since he was 12. "This country is not going to deport 11 million undocumented immigrants," he says. "What are we supposed to do with them?" 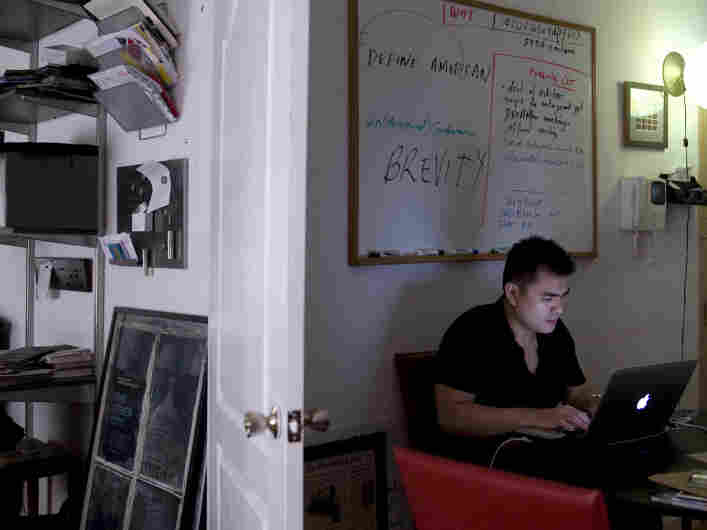 Jose Antonio Vargas works in his New York City apartment May 26. Vargas, a journalist, has revealed to the public that he is an illegal immigrant. Bonnie Jo Mount/Courtesy of The Washington Post hide caption

At age 12, Jose Antonio Vargas was put on an airplane and sent to the United States to live with his grandparents. For four years, he lived in California without knowing he was here illegally.

But when Vargas was 16 and tried to get his driver's permit at the Department of Motor Vehicles, a clerk whispered to him that his green card was fake — and that he shouldn't return to the DMV.

Since that day, Vargas has been living a double life. He graduated from high school and college, and went on to have an award-winning writing career at The Washington Post, The Huffington Post and the San Francisco Chronicle. But during that time, he says, he knew he was an "undocumented immigrant ... living in a different kind of reality."

"It means going about my day in fear of being found out," he recently wrote in the New York Times Magazine. "It means reluctantly, even painfully, doing things I know are wrong and unlawful. And it has meant relying on a sort of 21st-century underground railroad of supporters, people who took an interest in my future and took risks for me."

Mark Krikorian, the executive director of an immigration think tank, explains why he thinks Jose Antonio Vargas should leave the country.

Since his article was published on June 22, Vargas tells Fresh Air's Terry Gross, he has heard from thousands of supporters, former classmates and politicians — but not from any immigration officials

"My lawyers and I have not heard from anybody," he says. "We're just kind of waiting. I think when I decided to do this, I had to get myself into a place where I could be prepared for anything and everything."

Vargas says his lawyers and his mother — whom he has not seen in 18 years — had advised him not to publish the piece in the first place.

"It's one thing to do what I did," he says. "It's a whole other thing to write it in print — admitting to the things that I had to do."

In the piece, Vargas recounted how he had to doctor a Social Security card in order to secure a job at The Washington Post and attend a function at the White House.

"I had to make the choices that I had to make," he says. "It's interesting because we live in a country of laws, and this is why I came forward — to take responsibility for what I did and to say that I'm sorry for breaking our country's laws. But at the same time, since the founding of this country, sometimes laws are broken and need to be fixed."

How To Define An American

Vargas says he also decided to come forward with his story after reading about four students who walked from Miami to Washington, D.C., to lobby for the Dream Act, which would have given legal status to children who were in school and had been brought to the United States illegally by their parents.

"I'm sitting in my apartment in Manhattan thinking 'I was in their shoes ...,' " he says. "I had to do something. And that's why I decided to do it. The final straw was on Dec. 18. That's when the Dream Act failed in the Senate."

In addition to writing his story in the New York Times Magazine, Vargas recently started an advocacy group called Define American to "elevate and reframe how we think about immigration."

"To me what's been interesting is that [my] story was the most shared article on Google for an entire week," he says. "And it just got around — [the words] 'undocumented immigrant,' which is not exactly a sexy phrase, was a trending topic on Twitter. We had accomplished the goal of making sure people think about illegal immigration in a different way. And now, it's making sure that it's sustained — because it's not just my story, it's stories of countless undocumented immigrants in this country and what we have to do to survive."

Immigration Law One Of Many Changes In Arizona May 6, 2010
Questions On Public-Private Prisons For Immigrants Dec. 10, 2009

On whether he would have come out as an 'undocumented immigrant' if his grandfather, who raised him, had been alive

On working as a journalist while lying about his immigration status

"Laws are getting passed in states like Alabama that basically would punish American citizens who are 'harboring' people. Since the federal government hasn't been able to muster or to get comprehensive immigration reform passed, states are taking it upon themselves to police and enforce laws."

On the immigration system in the United States

"I think everybody could agree that our immigration system is broken. We have not told the truth about it. We have not come to the table and said, 'OK, these are the problems.' How do we balance the need for enforcement, border security enforcement — how do we balance that with actually granting some sort of path to legalization to people who have been here, who are educated here, who could be contributing? The fact of the matter is, this country is not going to deport 11 million undocumented immigrants. What are we supposed to do with them? What are we supposed to do with these kids?"

My Life as an Undocumented Immigrant