Accessibility links
As Pakistan Expands Nuke Arsenal, U.S. Fears Grow Pakistan's leaders have embarked on a plan to expand production facilities. At the same time, domestic terrorists have become increasingly sophisticated in their attacks. The two trends could be a lethal combination. 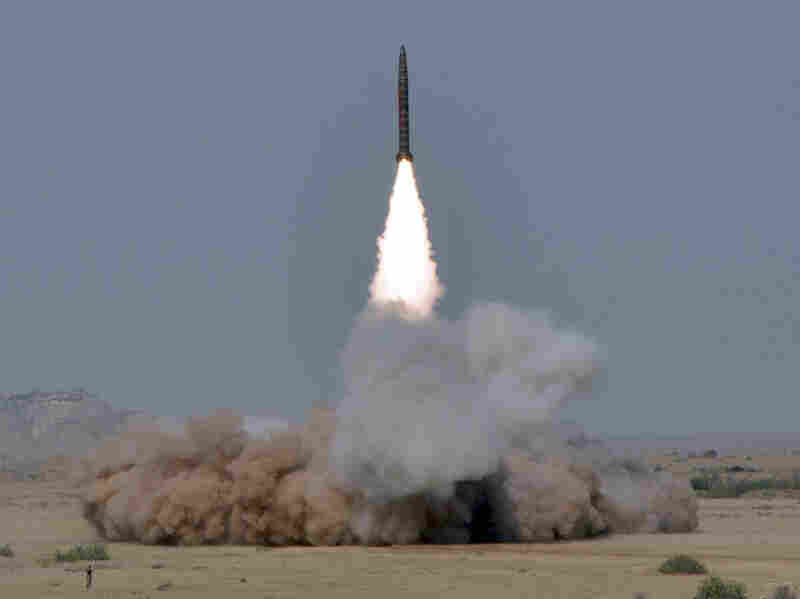 A handout photo from Pakistan's Inter Services Public Relations shows a Ghaznavi ballistic missile being tested on May 8, 2010. Pakistani officials say they hope to double the size of their nuclear arsenal. AP hide caption 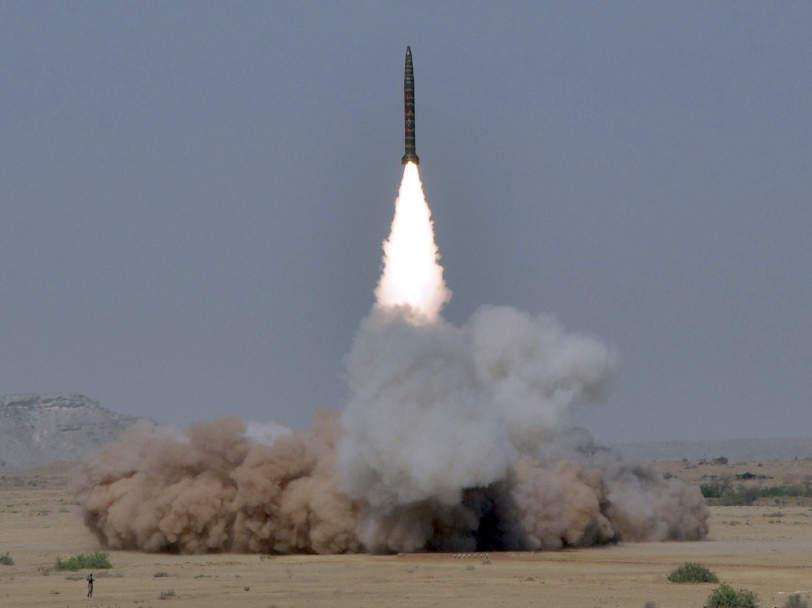 A handout photo from Pakistan's Inter Services Public Relations shows a Ghaznavi ballistic missile being tested on May 8, 2010. Pakistani officials say they hope to double the size of their nuclear arsenal.

As Pakistan tries to add to its stockpile of nuclear bombs, domestic terrorists are launching more sophisticated attacks on the country's military bases. Together, those trends are raising fears that terrorists might target Pakistan's widening network of nuclear facilities.

The U.S. relationship with Pakistan is fraught with anxiety and danger, and there is no more perilous element than Pakistan's nuclear weapons.

"It's the proliferation of that technology, and it's the opportunity and the potential that it could fall into the hands of terrorists, many of whom are alive and well and seek that in that region," Adm. Mike Mullen, chairman of the Joint Chiefs of Staff, said in a recent appearance before a Senate panel.

Pakistan is believed to have developed nuclear weapons in the 1980s. It carried out its first underground nuclear tests in 1998, and in the years since, has built up an arsenal of perhaps 100 or more weapons.

Recently it has become clear that Pakistan's leaders want a larger arsenal, says George Perkovich, a nuclear weapons expert at the Carnegie Endowment for International Peace.

"When you talk to Pakistani military leaders, they're not shy about it," he says. "It's not a secret."

To build a larger stockpile, the country needs more plutonium, the core explosive material in its nuclear weapons. Pakistan's leaders have embarked on a plan to expand its production facilities, including three new reactors that produce plutonium.

Current and past satellite images show these reactors in various stages of construction, says David Albright, director of the Institute for Science and International Security.

"It's a dramatic scale-up of their ability to make plutonium for nuclear weapons," he says. "The last one started to emerge just several months ago."

The security of Pakistan's nuclear weapons has caused plenty of anxiety in the United States. There is no doubt that Pakistan has made significant efforts to protect these weapons — from instituting layers of security at bases; to screening scientists, engineers and workers who handle them and their components; to forming special military units to protect them.

As Pakistan's nuclear infrastructure expands, it presents even greater challenges for security, says Shaun Gregory, an expert on Pakistan at the University of Bradford in Britain.

Gregory has closely examined several attacks carried out by domestic terrorists on key military installations, including an attack on a naval air station in Karachi in May and an attack on the army's general headquarters in Rawalpindi two years ago.

"They appeared to have some insider knowledge about the base and its operations," he says. "They even knew where surveillance cameras were."

Those attacks didn't target nuclear sites, but Gregory calls them a virtual blueprint for a potentially successful attack on a nuclear weapons facility.

Not all experts on Pakistan agree with Gregory's bleak assessment. Perkovich notes that over the past decade, Pakistan has worked hard to secure these weapons and the complex infrastructure that spawns them. He calls the army the most competent institution in Pakistan, albeit with one large qualification: It's not competent.

"And we've seen it from their point of view in the raid on Osama bin Laden, the raid on their own headquarters, so there's real cause of concern," he says.

Reliance On, And Distrust For, The U.S.

The relationship between Pakistan and the United States is soaked in ambiguity and mistrust, and it seems to have reached a new low after the U.S. raid that killed bin Laden.

"What they're worried about is the U.S. stealing their nuclear weapons, so what they all point to is the raid on Osama bin Laden," Perkovich says. "That's the demonstration of the threat that they worry about."

U.S. efforts to help Pakistan safeguard its growing nuclear arsenal have met with some success, says Feroz Khan, who worked for many years inside Pakistan's nuclear directorate, known as the Strategic Plans Division.

"The United States is the most advanced nuclear power with the best practices in the world," Khan says, "and the Pakistani system actually tries to emulate them and learn from them. They have not been shy of doing that."

For years, Pakistan has been fearful that in a crisis, the U.S. might try to seize its nuclear bombs. The bin Laden raid has led some in Pakistan to advocate dispersing the nuclear weapons to numerous secret sites. But greater dispersal can lead to greater insecurity, with more people knowing about hiding more bombs in more places.

"It is a paradox that they seek a lot of cooperation from the United States, as far as nuclear security is concerned," says Khan, who now lectures at the Naval Postgraduate School in Monterey, Calif. "But then they have to draw a line at some point, because it tips over to a place where they cannot fully trust the U.S. in terms of the location."

Recent developments have deepened concern among Pakistan experts in the United States. A growing nuclear infrastructure, an expanding weapons stockpile and ever more dangerous domestic attacks are a lethal combination, Albright says.

"Particularly the most recent attack is really chilling," he says. "And you have to worry that nuclear sites could be targeted, and the attackers could muster the resources to do it."

Gregory is willing to go so far as to predict an attack on a nuclear weapons site — soon.

"I think we are looking at the possibility of a very serious breach of Pakistan's nuclear security before too long," he says.

Those concerns were only heightened recently when several high-ranking Pakistani officers were arrested on suspicion of having ties to a local militant group that advocates the violent overthrow of Pakistan's government.

Also last month, news emerged that a cellphone seized in the raid on bin Laden's compound contained the numbers of a local militant group with ties to Pakistan's Inter-Services Intelligence agency.

The two cases highlight the possibility that militant groups might try to form connections with military or intelligence officials in order to penetrate Pakistan's growing nuclear weapons infrastructure.