Accessibility links
Mining Firms' Quest To Cash In On Gold Rising gold prices are leading to a new gold rush, attracting companies to remote mountain and desert areas like Mesquite in California's Imperial Valley. There's no pick-axing or panning at one 19th-century mine here; the mining company has turned to more complex methods to extract whatever gold is left underground. 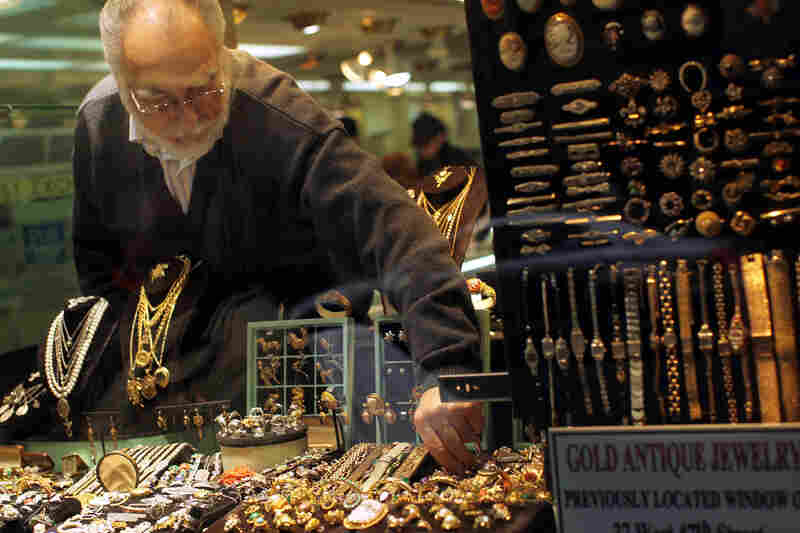 A gold jeweler reaches for a display piece at a shop in New York City in April. The price of gold in the international market is steadily rising. It's currently selling for about $1,500 an ounce Spencer Platt/Getty Images hide caption 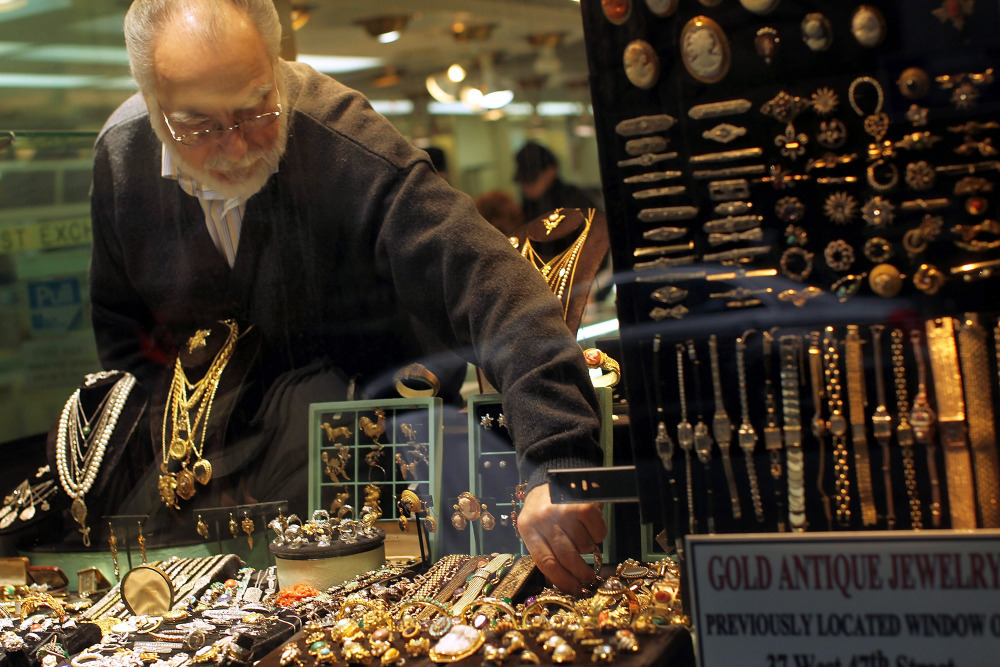 A gold jeweler reaches for a display piece at a shop in New York City in April. The price of gold in the international market is steadily rising. It's currently selling for about $1,500 an ounce

At the Mesquite gold mine in California's Imperial Sand Dunes, Luis Plancarte faces a chart with large yellow blocks of color, showing the areas that contain the most gold.

"You can see, out here it was less interesting; we drilled and didn't find anything," he says. "Here, we drill and it's like hmmmm!"

The mine is an enormous collection of pits carved out of ancient rock near a military bombing range, just 10 miles north the Mexico border and not far from Yuma, Ariz.

The price of gold in the international market is steadily rising: more than fivefold in the past decade alone. It's currently selling for about $1,500 an ounce, paving the way for a new gold rush. Ten old mines have reopened in remote mountain and desert areas of the American West over the past decade.

Plancarte climbs into his SUV and drives to Big Chief, a 19th-century pit within the Mesquite mine. The crew is preparing to use dynamite to blow up a corner of the site.

"When we blast, what we do is we drill a series of about 33-feet-deep holes," he says. "The purpose of the blast is primarily to soften the dirt, so that as the shovel digs, it can dig easier."

Minutes after the blast, giant trucks begin moving the heaps of loosened rock and soil out of Big Chief.

This is not 19th-century gold mining — no pick axes or panning here. This dirt has a low concentration of gold, which is sprayed with a cyanide solution so the gold particles can be separated from the carbon, a process known as heap leaching.

Jerry Hepworth, Mesquite's environmental manager, says the mine reopened in 1986. His company bought it three years ago and has stepped up the work in order to increase profits.

"Over the 25 years or so that they were mining here before us, they mined about 3 million ounces of gold from here," he says. "We're hoping to get almost the same amount out in our mine lifetime, too."

Hepworth says the Mesquite mine's lifetime is 12 more years, which could yield as much as $6 billion in gold.

Some fear that after the gold is gone, this mine will leave a toxic legacy.

"Ultimately, it's a big scar on the land," says Nick Ervin, a longtime desert conservationist in Southern California. "While you're mining, it's a source of air pollution. And with cyanide heap-leach mining, you have the leftover cyanide solution collected in usually now covered ponds, but whether or not those will not leak is an open question."

Cyanide ponds can leak into the soil, polluting groundwater and poisoning birds and other wildlife. The Canadian company that owns Mesquite, New Gold, says it's using the latest technology — a watertight plastic lining — to prevent this from happening.

Once it's done with the Mesquite mine, New Gold says, it plans to use this desolate site to develop other precious resources found in this desert: solar and wind energy.