Accessibility links
Gays At Work...In Closet Almost half of college-educated professionals who identify as LGBT are not open about their sexual orientation at work. That's according to a recent study from the Center for Work-Life Policy. Host Michel Martin explores why that's the case with Brian McNaught, a corporate diversity consultant, and Karen Sumberg of the Center for Work-Life Policy.

Almost half of college-educated professionals who identify as LGBT are not open about their sexual orientation at work. That's according to a recent study from the Center for Work-Life Policy. Host Michel Martin explores why that's the case with Brian McNaught, a corporate diversity consultant, and Karen Sumberg of the Center for Work-Life Policy. 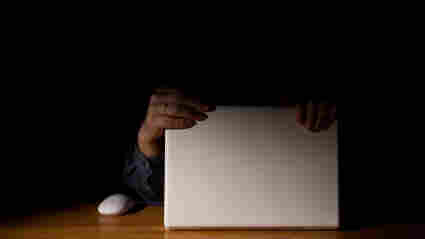 MICHEL MARTIN, host: I'm Michel Martin, and this is TELL ME MORE from NPR News.

Coming up, not one, but two of the nation's black college fraternities, Kappa Alpha Psi and Omega Psi Phi are celebrating their first 100 years this month. We'll talk about the history and the future of these organizations in just a few minutes.

But first, we want to talk about the fight for equality for gays and lesbians. Activists have been celebrating the recent decision by New York State to recognize same-sex marriages. And many activists are hailing that decision as a sign that lesbian, gay, bisexual and transgender people are finding greater support for living openly. But new research suggests that many gay Americans are still in the closet at work.

A recent study from the Center for Work-Life Policy found that 48 percent of college-educated white collar workers who identify as lesbian, gay, or transgender are not open about their sexual orientation in the workplace.

Joining us to talk about why that might be so is Karen Sumberg of the Center for Work-Life Policy. She's the author of the study. She's with us from our bureau in New York. Also with us Brian McNaught. He's worked for more than 37 years as a diversity consultant and lecturer for companies around the world. And he's with us from Provincetown, Massachusetts. I thank you both so much for joining us.

MARTIN: Karen, let me just start with you. What gave you the idea for the study? And why focus on white collar workers, per se?

SUMBERG: Well, generally in our research, we always are looking at the white collar, college-educated population. That's who a lot of the companies that we work with are interested in. This research actually came out of a forthcoming work on Generation X. We saw that a large number of Gen Xers were out at work and they were among the first generation to really be coming out at work more so than boomers. But as we started to look into the statistics and the data more, we found that this really warranted its own report.

MARTIN: I think a lot of people are surprised by these findings, because nearly 90 percent of Fortune 500 companies explicitly prohibit discrimination based on sexual orientation. Fifty-seven percent of them extend benefits to the same-sex partners of their employees. There's one company, I think it's Cisco, that even makes up the tax premium for employees who are in same-gender couples that would pay the difference between what they would pay if they were able to legally marry.

So a lot of people would look at that and think that there must be a welcoming environment. Why aren't more people out?

SUMBERG: I think that programs and policies are wonderful and they certainly do a lot to help, but they don't ultimately create the inclusive environment in which someone would feel comfortable coming out. I think there are a lot of examples of small comments, different kinds of maybe body language or different conversations that would make employees feel like it wasn't a safe space. And so, it's looking beyond the programs and policies that is going to be very important for companies.

MCNAUGHT: The business case is that if you want to attract and retain the best and brightest people, you need to create an environment in which people feel valued and included. And I completely agree with Karen that these companies led the way in creating policies that were intended to create a workplace that felt welcoming so that they could attract the best and brightest and keep them and also get their fair share of the market.

There's, you know, billions of dollars from the gay community on the table and companies want to make sure they get their fair share of it. But the culture is impacted not by policies, but by people's behaviors and their attitudes. And, you know, homosexuality and gender identity is like a foreign language. You know, many people go to a foreign country not knowing the language and their anxiety is up.

The same is true with homosexuality. One of the things that we find is that people aren't hostile in the workplace. They're just ignorant and they don't know how to start a conversation with a gay person. They don't know what words to use. And because they're afraid of using the wrong words, they generally don't initiate a conversation even as simple as, how was your weekend?

MARTIN: Well, let me ask you this, Karen. What would be some of the reasons why people would not be out at work? Is there a fear of discrimination? Is that a reasonable fear?

SUMBERG: I think there is just that feeling of if you tell, how will that impact my career? Is that going to impact how people see me, and if they see me as a leader or as eligible for that next promotion? Will that really influence the decision making? I think that's a big concern that we've heard in the research.

MARTIN: If you're just joining us, I'm Michel Martin and you're listening to TELL ME MORE from NPR News.

We're talking about new research that finds that a large percentage of gay and lesbian white collar workers are in the closet at their offices. Our guests are Karen Sumberg of the Center for Work-Life Policy. She's the author of the study. And diversity consultant Brian McNaught.

Brian, same question to you. What are some of the fears that people express that would suggest why they don't want to be out at work? And have those fears changed over time?

MCNAUGHT: They've definitely changed. I think when I first started doing this work, Michel, it was not uncommon for me to walk into the training room and see that somebody had put religious tracks on all the chairs in the room. No one would dare do that today, at least in the corporations that are having me come in to do training.

There is an awareness now that there wasn't before that you're not going to be rewarded for inappropriate behaviors around gay people. I believe that we, in large part, create our own nightmares that most people who come out find that it's nowhere near as bad as they thought it was going to be.

But there is a fear of being marginalized. I feel that contrary to what their beliefs might be about that I won't succeed and be promoted, that openly gay people are far more likely to be promoted than people in the closet.

MCNAUGHT: Because generally people who are in the closet, people suspect that they're in the closet to begin with. They avoid talking about their family life. And if they are seen as keeping a secret, secrets usually are associated with shame. Openly gay people are seen as leaders. They're people who have taken on the challenge of being out. They're unencumbered by any fears anymore. They can talk openly and they can put more of their energy into the job.

MARTIN: So if somebody says, how was your weekend? They don't have to spend five minutes thinking about what to say. They can just get to the business.

MCNAUGHT: No, they say, you know, Ray and I went to see a movie. How was your weekend?

MARTIN: But what about the fact that there are 29 states that don't bar employers from discriminating against LGBT workers? That there is not a larger sort of legal framework that says you can't discriminate against people because of sexual orientation. Do you think that that's part of it?

MCNAUGHT: I don't. I think the issue, seriously, is region. I think Karen would probably confirm that where a person worked had a lot of influence on whether or not they felt comfortable coming out. If they were in the Bible Belt, that's a harder thing to do.

But as I think you know, the Employment Non-Discrimination Act, is seeking to standardize rules across the country saying that in no state will you be allowed to discriminate on the basis of sexual orientation or gender identity.

MARTIN: Brian, do we have any sense overall - in the workplace overall - about how many people are out?

MCNAUGHT: It's a very difficult thing to measure because being gay is an invisible trait, unlike color or gender, where you can actually measure how many people are in your workplace that's people of color or women. It's challenging to get an accurate number.

But anecdotally I can tell you from, you know, the 37 years that I've been doing this work that there are just more and more people who are out that I focused on the fact that 52 percent are out, not that 48 percent aren't in.

My partner was a managing director at Lehman Brothers and he was openly gay. He left the firm because he felt tolerated instead of valued. But all the other gay people at work avoided him because they didn't want to be seen with an openly gay person. That's changed.

MARTIN: So now what do you talk about when you address these issues? Focusing on the 52 percent who are out - what is there to talk about now?

MCNAUGHT: Well, I continue to affirm for them that while we'll ever probably get 100 percent, we all are individually responsible for the music that we create. As Karen said initially, the policies don't change the culture, it's our individual behaviors that do. And I tell them that's your music. And I ask them to be aware of how individually they are impacting, whether they're using inappropriate words like lifestyle or sexual preference. We're still looking to create an environment in which people can come out if they want to, not that they have to come out.

MARTIN: Brian McNaught is a diversity consultant on LGBT issues. He joined us from Provincetown, Massachusetts. Karen Sumberg is a senior vice president at the Center for Work-Life Policy. She's the author of a recent report on how LGBT people disclose their sexual orientation at work. And she was with us from our bureau in New York. Thank you both so much for joining us.

SUMBERG: Thank you so much.

Study: The Power of "Out"

Workplace Atmosphere Keeps Many In The Closet July 3, 2011