Accessibility links
Astronauts Recall Shuttle Highs As Program Closes Down There are 30 years between the bookends of the first and last NASA space shuttle flights. The scheduled launch of Atlantis will be the program's final mission. It's a moment American astronauts Leroy Chiao and Cady Coleman describe as sad but essential.

There are 30 years between the bookends of the first and last NASA space shuttle flights. In those three decades, the shuttles Columbia, Challenger, Discovery, Atlantis and Endeavour flew well over 100 missions.

But this summer, the program draws to a close to allow the space agency to dedicate more funding and energy to exploring the farther reaches of space. In the process, NASA hands over greater responsibility to private space companies. 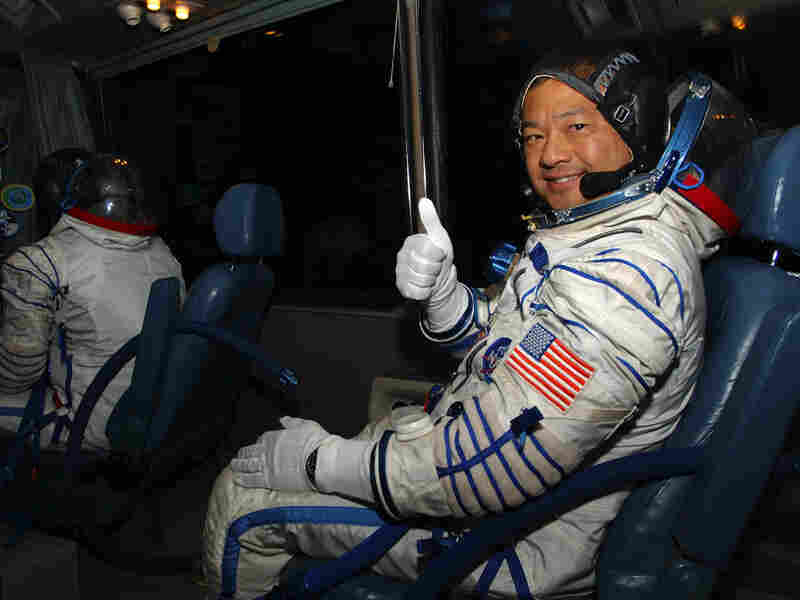 American astronaut Leroy Chiao gives a thumbs up during the ride from a suit-up facility in Kazakhstan in 2004. The mission took Chiao to the International Space Station and was his last trip into space before retiring in 2005. Bill Ingalls/AP hide caption 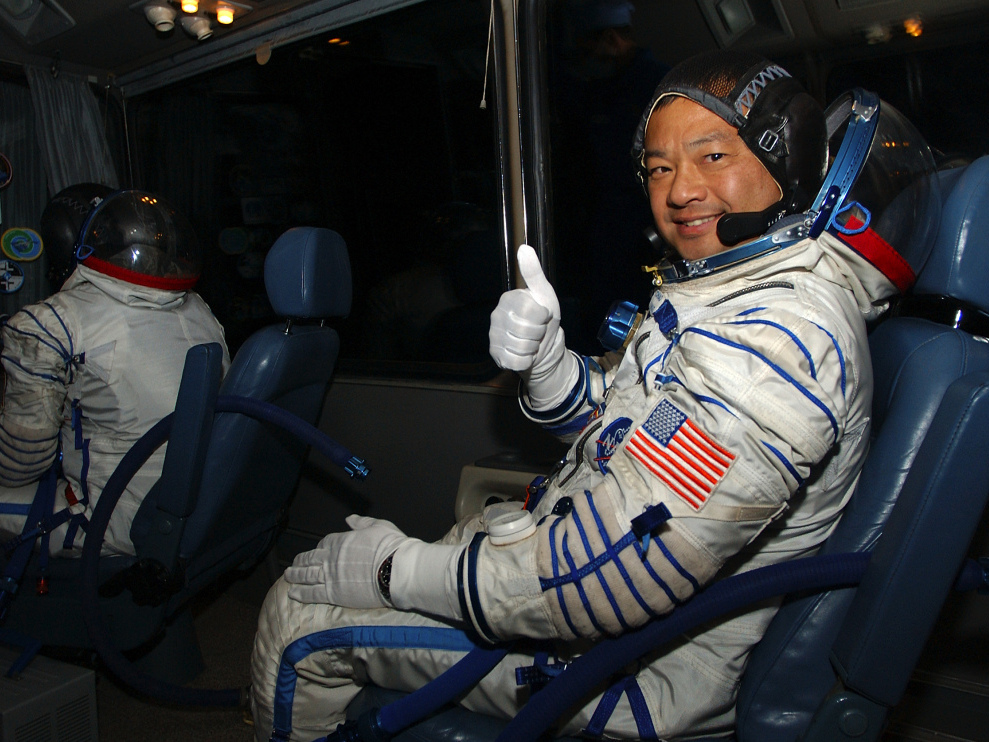 American astronaut Leroy Chiao gives a thumbs up during the ride from a suit-up facility in Kazakhstan in 2004. The mission took Chiao to the International Space Station and was his last trip into space before retiring in 2005.

It's a moment that American astronauts Leroy Chiao and Cady Coleman describe as sad, but essential. The two reflected on their favorite and most memorable moments from the shuttle era with All Things Considered host Melissa Block.

'For A Few Moments, I Felt Like A Satellite'

Chiao was an astronaut for 15 years and retired in 2005. During his tenure with NASA, he flew four space missions. He says his most magical moment happened on his third flight, when he was doing maintenance during a space walk. A robotic arm moved him between work sites and at one point, he couldn't see the space shuttle or station in his peripheral vision.

"All I had was a faceful of the Earth. And you know, the colors of the Earth from space are much brighter, more vivid than you might imagine, and it almost looks fake," he says. "But for just a few moments, I felt like a satellite, orbiting the Earth on my own."

He says experiences like that have changed him for the better. 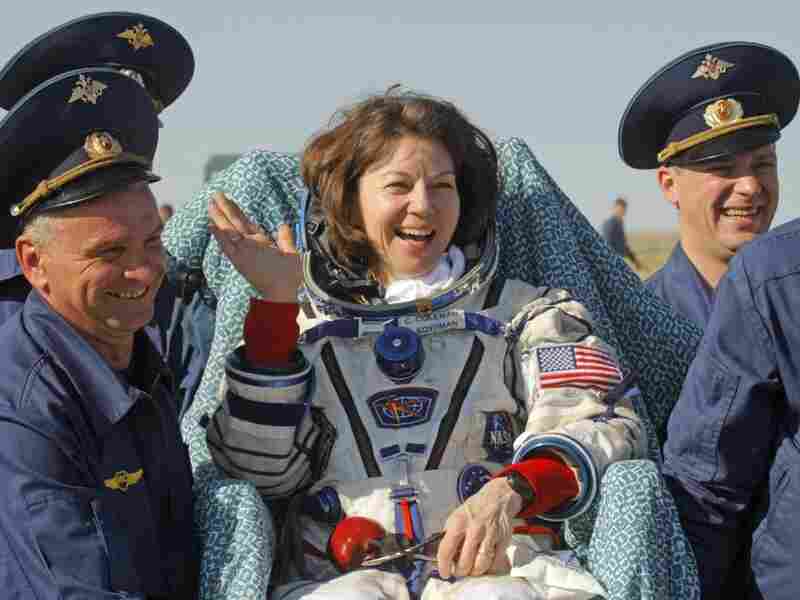 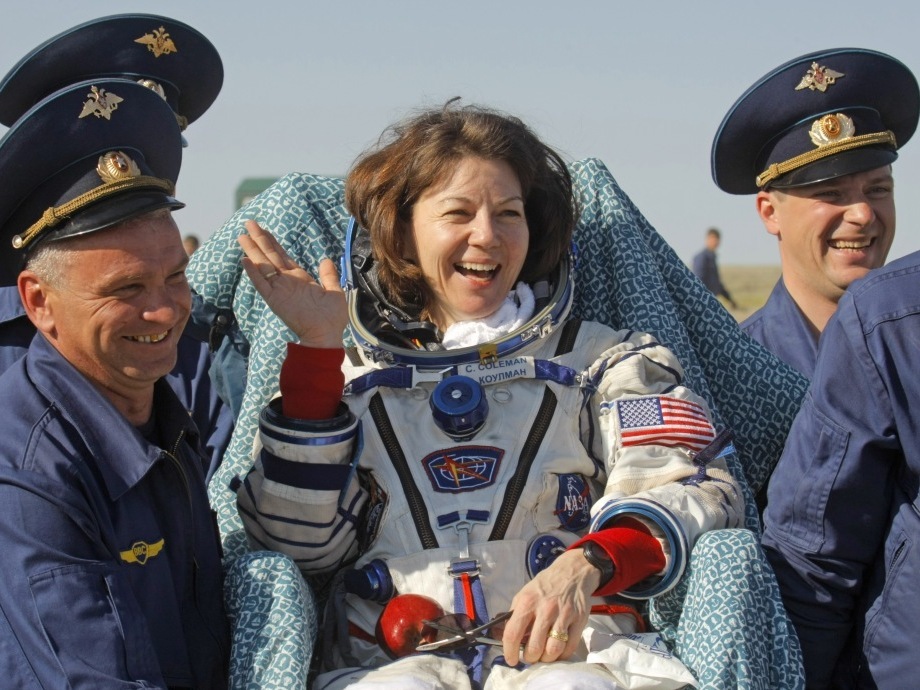 "It really made me have a bigger picture of life," he says. "I used to be bothered by little things — if I got overcharged for something or someone was rude. And gosh, after spaceflight, those things aren't important."

Coleman still works in space and recently returned from a trip to the International Space Station. She says her most memorable moment is similar to Chiao's. She describes a time in an area of the International Space Station that has windows all the way around, including one that faces the Earth. She says crouching over it felt like surfing or flying.

"Seeing New England approach so it's in the distance and it's getting closer and closer. Then you're right over it and you see where you live and you see Cape Cod and it's just beautiful, and you want it to stay right there. But it doesn't. It recedes into the distance so quickly," she says. "It makes me wistful and at the same time, I know that in an hour and a half I'll be back."

Chiao says it's possible to see that kind of detail from 200 miles up with the naked eye, but with a telephoto lens you can also see streets, city grids and even fireworks.

Sad But Essential For Shuttle Program To End

Both astronauts say they will be sad to see the space shuttle program end. Chiao says he worries that the biggest loss will be the NASA's "know-how" — how to build and operate the shuttles — which was something other countries have yet to master.

Other Experiences In Space

On Their First Launch

Leroy Chiao: "We got in the vehicle not expecting to launch because the weather wasn't that great. But at T minus 5, suddenly the weather cleared. It became real in the 1.5-minute mark where the call comes up to close and lock your visors, initiate [oxygen] flow and have a good flight. Then at T minus zero, it's like somebody kicks the back of your chair because those solid rocket boosters light and instantly there's about another 5 million pounds of thrust."

Cady Coleman: "We had seven delays over 30 days. A part of you has a hard time believing that a real person gets to leave the planet, and every one of those delays reinforces that feeling. So when we really did launch, it was just so amazing to me. We were elated, hooting and hollering. It was so great to see the clouds getting smaller so quickly and the blue sky changing to the black of space and just so exciting to — just 8 1/2 minutes after liftoff — be in space."

On Explaining Job To Her Son

Cady Coleman: "We were at something and there was a picture of somebody in a big white spacesuit doing a spacewalk. He looked at me and said, 'Mommy is that you?' And I said, 'No, that's one of the other astronauts.' And he goes, 'Well, if that's not you, whose mommy is it?' and I had to explain to him that, occasionally, we let daddies become astronauts too."

Both Chiao and Coleman acknowledge that the program had become too expensive. But Coleman says she's optimistic that NASA's passion for exploration will continue to push the agency forward.

"In order to explore, we need a new vehicle. And we can't fly this one and operate this one. It's too expensive and it drains too many of the people that we need — we need their knowledge and expertise ... to develop new vehicles that will take us further. Because going further is what we're all about," she says. "It's a hard change, it's necessary and in some ways, I think it's OK just to take some time to grieve."

She hopes to see a manned mission to Mars sometime in her lifetime and says it's possible with global cooperation.

"I think we were not made to stay in one place. Our Earth is in the middle of a neighborhood, it's in the middle of a universe, and it is just in our nature to explore," she says. "I think it's necessary to do it technologically in a way that makes sense. That means in terms of money and people and nations and cooperation."

Chiao plans to attend the launch at the Kennedy Space Center, where he says there is a tradition of lighting up cigars after a successful liftoff. Coleman expects the event to be an emotional one.

"I probably cry at most launches," she says. "It's a really emotional thing to see all that power and just knowing that those are people. ... They're friends, practically family, and they're leaving the Earth. It's a really big deal."

The space shuttle Atlantis is scheduled to launch at 11:26 a.m. ET on Friday.

Whither The Astronauts Without A Shuttle? July 3, 2011
Space Shuttle Endeavour Embarks On Final Mission May 16, 2011
Workers Left Rattled By Final Shuttle Launches May 16, 2011